Serena Williams of The United States celebrates victory during the Ladies Singles second round match against Christina McHale of the United States on day five of the Wimbledon Lawn Tennis Championships. (Clive Brunskill/Getty Images)
By Matthew Reitman 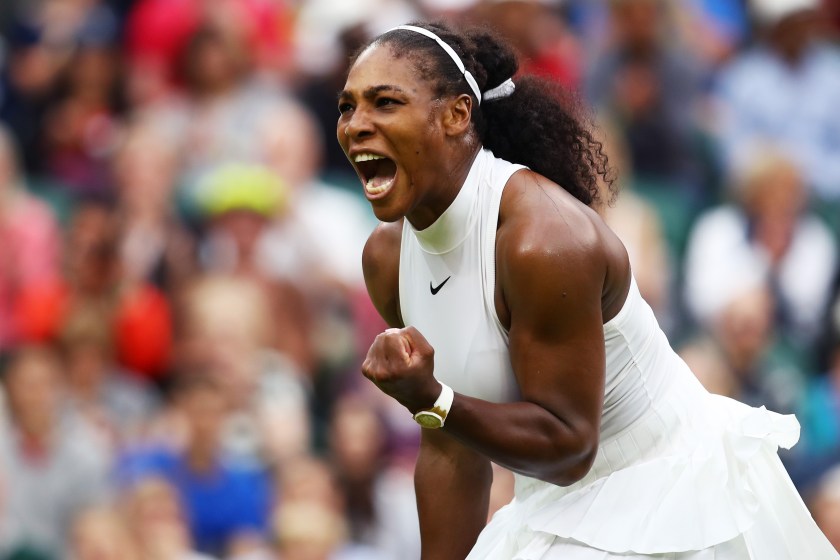 It is the summer of Serena. Then again, many summers for the last decade could be described as the same. At this year’s Wimbledon tournament, Serena Williams won her 22nd grand slam title and then went on to win the double’s title with her sister Venus as her partner. Talk about domination. Perhaps Bill Simmons described Serena’s success best when recapping it on his new show Any Given Wednesday by saying,”At 34, she’s become the Tiger Woods that we never totally got to see: A black prodigy who ruled a country-club sport without ever flaming out.” Simmons adding, “Oh yeah, and she’s also way more interesting than Tiger ever was.”

Her success is undeniable and her status as a champion of equal rights is equally irrefutable. Throughout her career, Serena has shattered glass ceilings and soared across racial divides. The Atlantic‘s Vann R. Newkirk II compares her role to that of Ali’s, saying:

“I wrote about Muhammad Ali after his death and how his skills in the ring and his message of blackness, boldness, and beauty became a voice for black America and a balm for its ills in the critical time of rage and sorrow after Martin Luther King Jr.’s death. He was larger than life because he had to be—an incredibly unfair burden that he bore all the same. If the stakes today are less than then, the burden for Serena seems just as heavy. She has carried that burden with the same real, raw humanity and brashness of Ali—perfect in its imperfection—and has managed to cope with the twin perils of racism and misogyny while carrying it. While nobody asks for that burden, and carrying the weight of expectations of thousands (maybe millions) of people is entirely unfair, Serena has accepted it.”

Read Newkirk’s full thoughts here. But first, watch Serena Williams’ insightful interview after her historic win in the video below.