The 10-year veteran dishes on Kaepernick, Brees and whether things will finally change 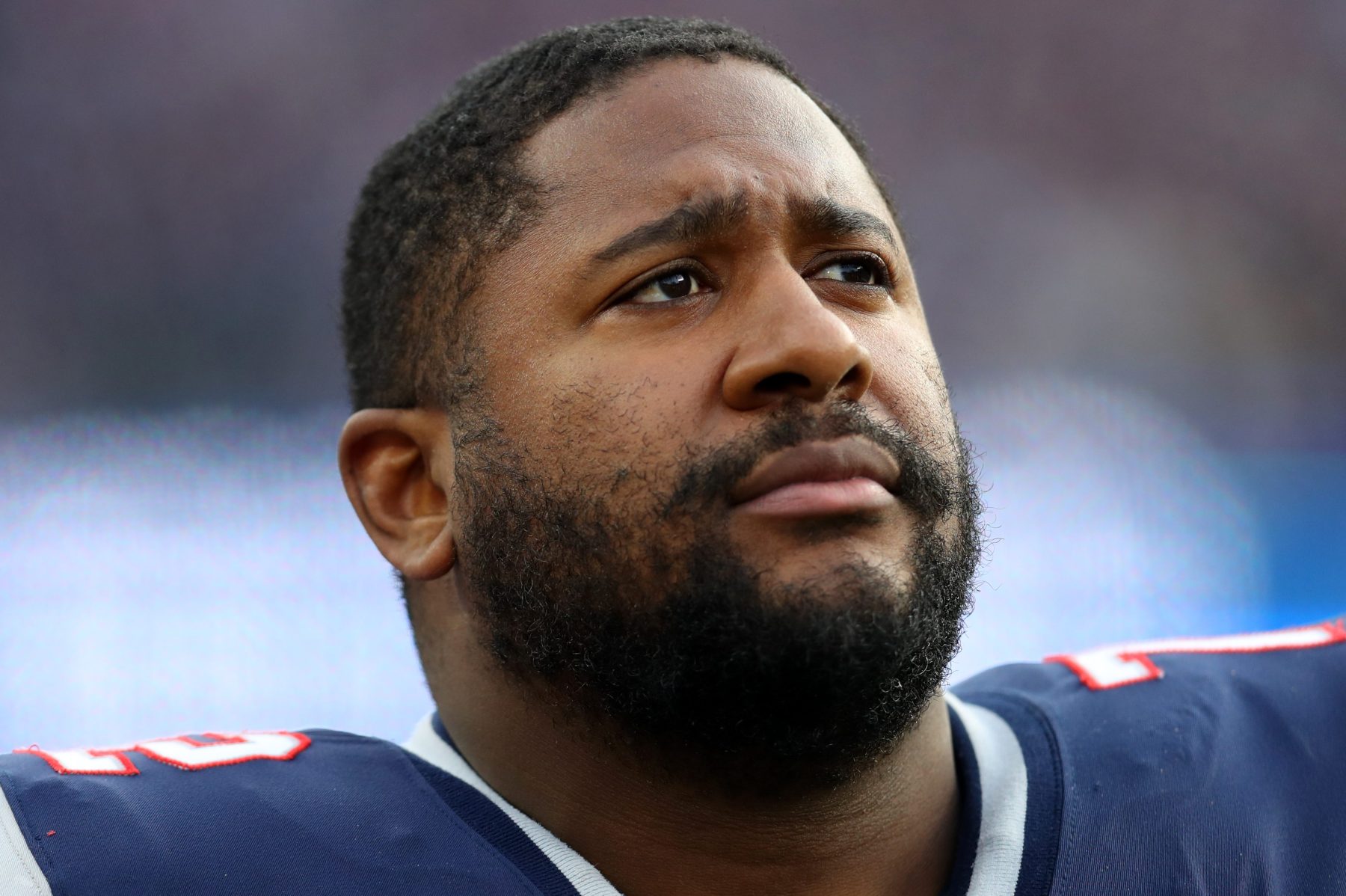 Marshall Newhouse. looks on during a game against the Miami Dolphins at Gillette Stadium. (Maddie Meyer/Getty)
Getty Images
By Evan Bleier / June 11, 2020 9:51 am

Though NFL player Marshall Newhouse may not quite be a household name, the 31-year-old is many other things, including a Super Bowl champion, a gifted entrepreneur and investor who focuses on everything from real estate to video-game technology, and a graduate of both Athlete Transition U and the NFL Business Academy.

The TCU alumnus is also a Black man who, unlike George Floyd, has had the opportunity to witness and reflect on everything that has happened in the United States since Memorial Day. Talking about Floyd’s murder from his home in Austin, the first word Newhouse uses is “unsurprised.”

“We witnessed a graphic murder, a snuffing out of life, on video. For a lot of people that was new, but I think for Black people and other people who pay a bit closer attention, that’s not new,” the 10-year NFL veteran tells InsideHook. “People who live this every day understand this is just, unfortunately, another day and another scab that’s reopened. We witnessed something that’s been the majority of the history of our country, to some degree. It’s just something we’ve seen over and over again. Then, you also recognize that people who hadn’t witnessed this before are seeing it. They’re disgusted, they’re angry and they’re frustrated. It’s only been a week or two of unrest and literal protest. But it’s been an emotional protest that really hasn’t taken place, at least in my time on the planet.”

During the rest of a recent phone conversation with Newhouse, your humble correspondent did his best to ask meaningful questions, and more importantly, to really listen to the free-agent offensive lineman’s answers. Here, in his own words so they can be as impactful as possible, is the rest of what Newhouse had to say:

InsideHook: Since Floyd’s death, we’ve seen a number of corporations denouncing racial inequality and supporting Black Lives Matter, Blackout Tuesday and nationwide protests. Do you think it will continue?

Marshall Newhouse: History tells us it won’t continue. History tells us that, for the time being, there will be things the average person can do to feel like they’re participating but, in reality, it doesn’t carry a lot of weight. And not only does it not carry a lot of weight at the moment, but it also won’t be sustained. History tells us that. Trayvon [Martin] was killed and you had outcry in the Black community. And some people, as I said, pay attention and get it. And then it waned away until there was the next one and then the next one and the next one. History tells us that you get to post a black square and move on with your life. This particular moment is in our field of view right now but we’re living in such a short-attention-span society, who knows how long that’ll last. Who knows how long the conversation about how systemic racism is interwoven into law enforcement in America will last this time around. I’m hopeful that it will sustain and lead to some change.

Have you seen any indication that real change is going to come?

Since this has happened, you’ve seen protests and visceral anger, real anger. You’ve seen people who are trying to find themselves in this and realizing there is a place for them to make some kind of change by latching onto these protests and these movements. You see nibbles of it and you see whispers of it. That gives me a little hope. There are Black people who are demanding it now more than ever. But, like I said, we’ve just seen this over and over before. I’m trying to figure out my role in this and how I can help the people who I come in contact with and how I can help them learn. But you know, Google is free. The history of this country is hundreds of years old. I have only so much attention I can give to someone and hold their hand through getting caught up on American history and police brutality and systemic racism. I have tried to check my cynicism and I hope there’s continued progress, but I’m waiting and seeing because I’ve just seen it before.

As a Black athlete or just a Black person in general, have you felt a weight or pressure to try to educate your non-Black friends, teammates and social media followers?

I have felt that way before, but I feel less of it now. You either choose to want to know and find out about what’s gone on in this country or you don’t. Outside of the weight of just being a Black man every day, there have been times where I felt that pressure to bring someone along. I don’t feel that pressure anymore, I don’t put that pressure on myself anymore. I just present myself as a limited resource, because I just am so protective of my energy and my emotional space now. More so now that I’m older and a little wiser. But there are instances where I’d be happy to walk people through and point them in the right direction.

What did you think of the comments from Drew Brees and his subsequent apologies?

I was his teammate briefly and wasn’t there for years and years like a lot of those guys have been, but I had nothing but respect for him. I think he recognized in the moment how what he said was just tone deaf. So, on one hand, he has seemingly taken it to heart and realized some blind spots that he had and I commend him for that. But on the other hand, he’s also 41 years old and has been in locker rooms with Black men for nearly 20 years in the NFL. So, the thing I said before: Google is free. There are people who are scholars in this field who have devoted their lives to these issues. There’s information out there. I just have less patience than I ever have for people who don’t get it. As you saw with all of the guys who have played with him or currently do and other guys in our league … there was disappointment because it’s not hard to get if you look. If you’re trying to look, it’s not hard to get. We’ll see. He is, I think, objectively a good person. I’ve never heard bad things about him but that doesn’t take away from maybe him having a warped sense of what this was all about.

What’s your response to NFL commissioner Roger Goodell coming out in support of Black Lives Matter and saying the NFL is committed to helping foster change?

I’m skeptical. I think their hand was forced when the league MVP was in a video asking for people to respect and treat Black lives equally. I don’t know what else they could have done. They had every prior opportunity to treat this situation, both the racial component in America and then the athletes’ reaction to it, in good faith. And I just don’t think they ever have. They had every opportunity for four years — at least since Colin Kaepernick. They’ve had every opportunity to do something in earnest and for it to just now happen, I’m skeptical. That’s not to say it can’t become something positive and some of those things they talk about in such vague. Terms can’t come to fruition. They made that statement and if they push a little money here and a little money there, it could be an overall net positive. When I got into the league 10 years ago, I wouldn’t have expected to ever hear the commissioner making a statement like that. So we can take that as a small token, but still expect and hope for more. But I am skeptical.

Is there anything the NFL could do — some have mentioned Goodell taking a knee with players — to convince you they were doing more than just paying lip service to this cause?

Honestly, at this point, I don’t care about a gesture anymore. I care about a longterm, sustainable, consistent plan. To me, a gesture from someone doesn’t mean anything. You could do that and then, potentially, not do anything else. You pacify people or acquiesce to how you feel. To me, it doesn’t matter anymore. Talk to me in 10 years, see what they’ve done since then, that’s what matters. The gestures in the moment don’t matter anymore.

Do you think we’ll see Kaepernick get signed in the wake of all this?

No, for a couple of reasons. I don’t see a team now, in earnest, wanting to sign him. But I also don’t see him see him agreeing to be signed because, at the best, it would look like someone was pandering or trying to do this. It’s just too late for him. That’s my personal opinion. He’s been through the wringer and I think he’s been vindicated in a lot of ways about things that he did. But I do believe he could have played this past season and helped somebody. I just don’t see him taking an offer anymore because of how things have gone down.