Can the QB and coach carry one of the least impressive Patriots teams in recent memory?

The New England Patriots finished the regular season this year with a point differential of +111.

It’s a good stat — but also a deceiving one, as 110 of New England’s +111 points came within the putrid AFC East against the Dolphins, Jets, and Bills. Outside of the division, they were just +1.

Sure, the Patriots are fourth in the NFL in points scored per game (27.3), seventh in points against (20.3) and went 11-5 without losing a game at home. But those numbers are all inflated by the competition in their division.

The fact of the matter is this is a Patriots team that lost to the last-place Jaguars, the last-place Lions, and the 7-9 Dolphins on a play that was so egregious it now has its own Wikipedia page.

IT'S A MIRACLE IN MIAMI pic.twitter.com/PvNMIaXBAB

For further proof of how mediocre this Patriots team is — at least by the franchise’s championship standards — fans only need to use their eyes, according to ESPN senior writer Ian O’Connor. 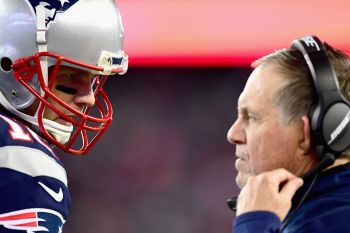 Tom Brady #12 of the New England Patriots reacts with head coach Bill Belichick during the fourth quarter of a game against the Seattle Seahawks at Gillette Stadium on November 13, 2016. (Photo by Billie Weiss/Getty Images)
Getty Images

“I think this is one of the least impressive Patriots teams I’ve seen in a long time,” O’Connor, who published Belichick: The Making of the Greatest Football Coach of All Time, last year, told RealClearLife. “You might have to go back to 2009, when they went 10-6 and got blown out at home by Baltimore in their playoff opener, to find one that’s weaker. Their important players all seem a step slower to me, and it feels like muscle memory got them to 11-5 more than anything else.”

And out of the Patriots important players, none has been slower than quarterback Tom Brady. This season, he posted his highest interception total and lowest touchdown rate since 2013 and his fewest yards per attempt and yards per game and lowest passer rating since 2014.

Considering that happened in a season of record passing statistics that saw Patrick Mahomes throw 50 touchdowns and nine quarterbacks finish with a passer rating of more than 100 (Brady wasn’t among them), it’s perfectly reasonable to say Brady took a step back in 2018-19.

By his standards Brady’s been good, not great. But that doesn’t mean he can’t be this postseason — especially with some help from coach Bill Belichick.

History could be on their side for another reason. 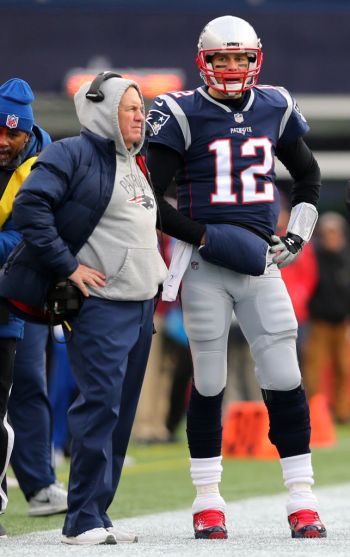 Head coach Bill Belichick of the New England Patriots stands with Tom Brady #12 during the second half against the Buffalo Bills at Gillette Stadium on December 24, 2017. (Photo by Maddie Meyer/Getty Images)
Getty Images

In 14 games against the quarterbacks (Mahomes, Philip Rivers, Andrew Luck) who remain in the AFC playoffs, Brady and Belichick have gone undefeated.

Between them, Mahomes, Rivers, and Luck barely have played double the number of playoff appearances (17) that Brady and Belichick have together in the Super Bowl (eight).

Belichick and Brady have made their living by preying on inexperienced opponents and getting by with smarts, guile, and smart clock management when the talent isn’t there.

They’ll need to do it again.

The Chargers haven’t beat the Pats since 2008 when Brady was injured, the Colts haven’t beaten them since 2009 when Peyton Manning was under center and, though the Chiefs did beat them last year, they lost to New England earlier this year in Foxborough in a shootout.

Granted, things have changed for both teams since then (Josh Gordon is gone for New England; Kareem Hunt is gone for Kansas City), but, if Brady and Belichick both play and coach to their full potential, there’s no reason to think they cant’t go on the road and win the AFC Championship at Arrowhead – if they even have to.

“It’s funny, but New England is one surreal Miami Dolphins play away from being the No. 1 seed in the AFC,” O’Connor said. “Brady and Edelman look older, Gronk looks mummified half the time, Josh Gordon is gone, and the defense can’t get to the quarterback or consistently stop the run, and yet they could still end up hosting another AFC Championship Game if the Chiefs lose in the divisional round — a very realistic scenario. I don’t think there’s enough talent on the roster to advance to the Super Bowl, never mind win it, but as long as Belichick and Brady are upright you have to give them a credible chance to get there.”

Given the mediocrity of the team, a loss in the divisional round, the AFC Championship, or the Super Bowl won’t do much to harm the overall legacy of the best quarterback and coach of all time.

But a win, and another, and maybe even another would add a chapter in what has already been one of the most dominant dynasties in NFL history. 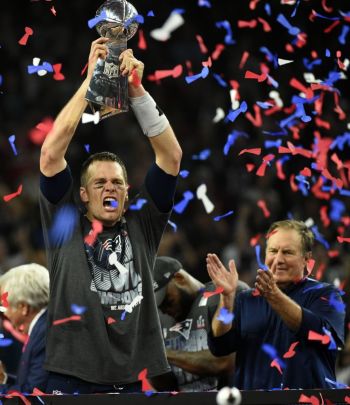 Tom Brady #12 of the New England Patriots holds the Vince Lombardi Trophy as Head coach Bill Belichick (R) looks on after defeating the Atlanta Falcons 34-28 in overtime during Super Bowl 51 at NRG Stadium on February 5, 2017 in Houston, Texas.
The Patriots defeated the Falcons 34-28 after overtime. / AFP / Timothy A. CLARY (Photo credit should read TIMOTHY A. CLARY/AFP/Getty Images)
AFP/Getty Images

“I think if they reached the Super Bowl it would stand among New England’s greater accomplishments in the Belichick/Brady era,” O’Connor said. “And in some ways, the football gods would have given one back to Belichick after denying him a playoff berth in 2008, when he went 11-5 with Matt Cassel and still didn’t get in. I would say if they won it all with this thin and uninspiring group for ring No. 6, Belichick and Brady might top their epic upset of the Rams for ring No. 1.”

The playoffs begin for Brady and Belichick on Sunday afternoon in Foxborough. The Chargers will be playing their second straight road playoff game, there’s snow in the forecast and Malcolm Butler will not be playing under any circumstances.

If the 66-year-old coach and his 41-year-old quarterback still have some greatness left, the recipe for success will be pretty simple: just go out on the field and prove it.