Roberto Aguayo #19 of the Tampa Bay Buccaneers kicks the game-winning field goal as time expires against the Carolina Panthers during the game at Bank of America Stadium on October 10, 2016 in Charlotte, North Carolina. The Buccaneers won 17-14. (Grant Halverson/Getty Images)
By Matthew Reitman

Brady is back. The biggest story of the week was the return of New England Patriots quarterback Tom Brady from his four-game suspension. The golden boy immediately made his presence felt against the Browns, throwing for 406 yards and three touchdowns.

The week began with a sputtering offensive game on Thursday in San Francisco, with both the Cardinals and the 49ers managing only a touchdown in the first half. (The Cardinals ultimately pulled out the win.) With the Minnesota Vikings’ fifth straight victory, vagabond QB Sam Bradford may have finally found a home. The Cowboys surged further into the season with a win over the Bengals to improve to 4-1, and take the division lead, looking like the 2014 team (which went 12-4). On Sunday night, Green Bay dealt the Giants their third straight loss, leaving many questioning if the team can save its season.

On Monday Night Football, the Panthers tried to overcome a roster depleted by key injuries (Newton, Oher, Stewart, Bradberry were all out). Carolina stuck around with two touchdowns from running back Cameron Artis-Payne and 181 receiving yards from tight end Greg Olsen. Tampa Bay won, in the end, with a field goal by Roberto Aguayo (who missed two field goals earlier in the night) as the clock expired. The Buccaneers improved to 2-3, while the Panthers lost their third straight.

See highlights from the entire week below. 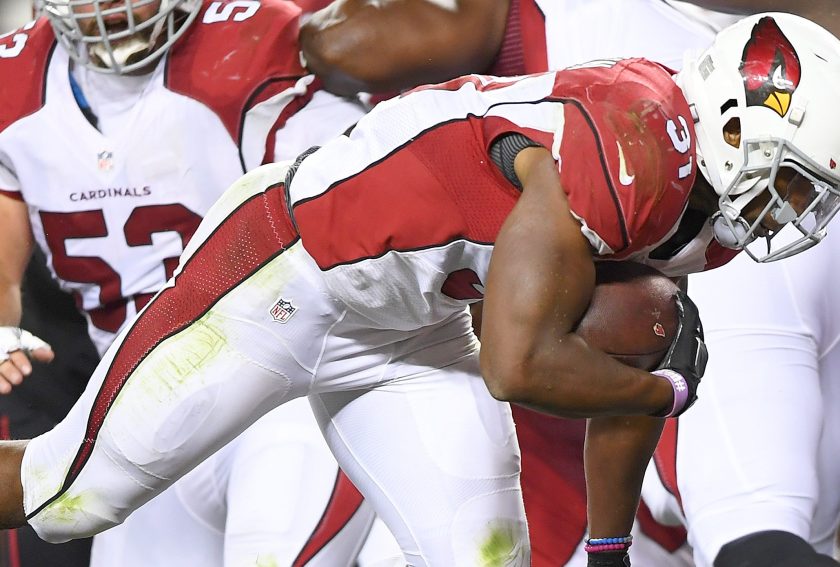 David Johnson #31 of the Arizona Cardinals dives into the end zone for a touchdown against the San Francisco 49ers during their NFL game at Levi’s Stadium on October 6, 2016, in Santa Clara, California. (Thearon W. Henderson/Getty Images) 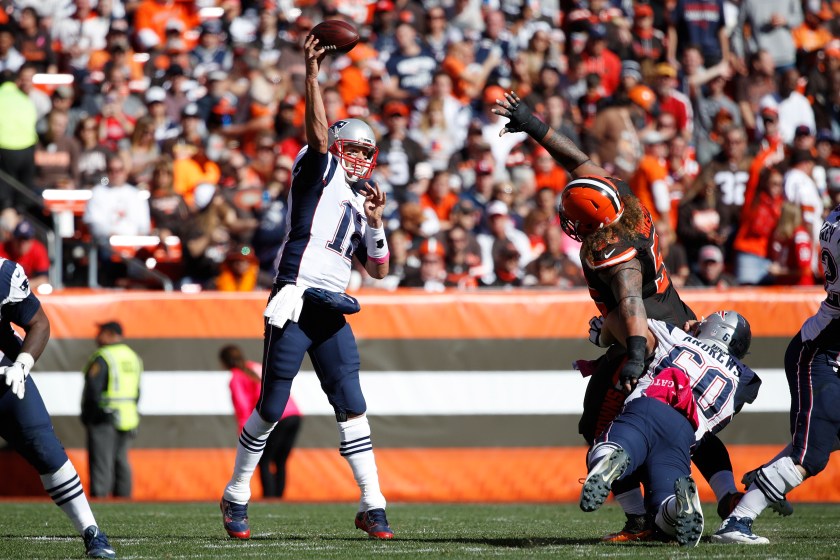 Tom Brady #12 of the New England Patriots passes against the Cleveland Browns during the game at FirstEnergy Stadium on October 9, 2016, in Cleveland, Ohio. The Patriots defeated the Browns 33-13. (Joe Robbins/Getty Images)
Getty Images 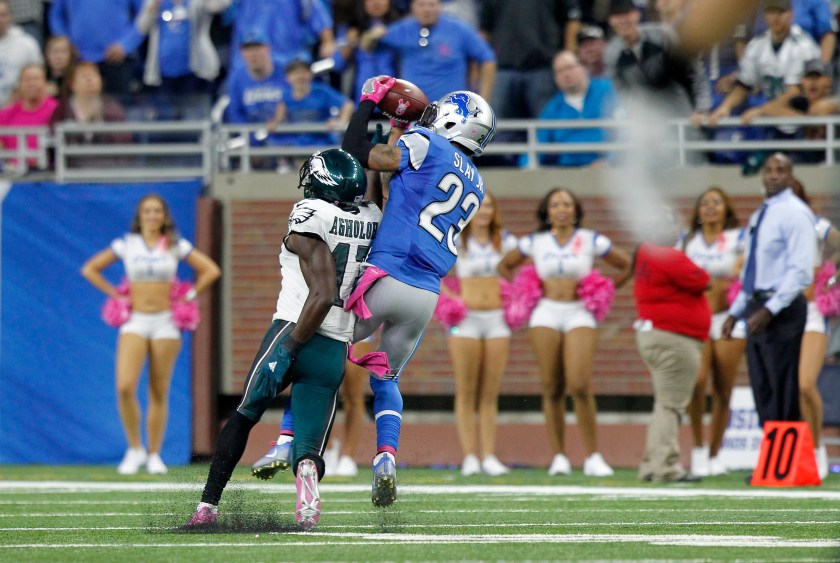 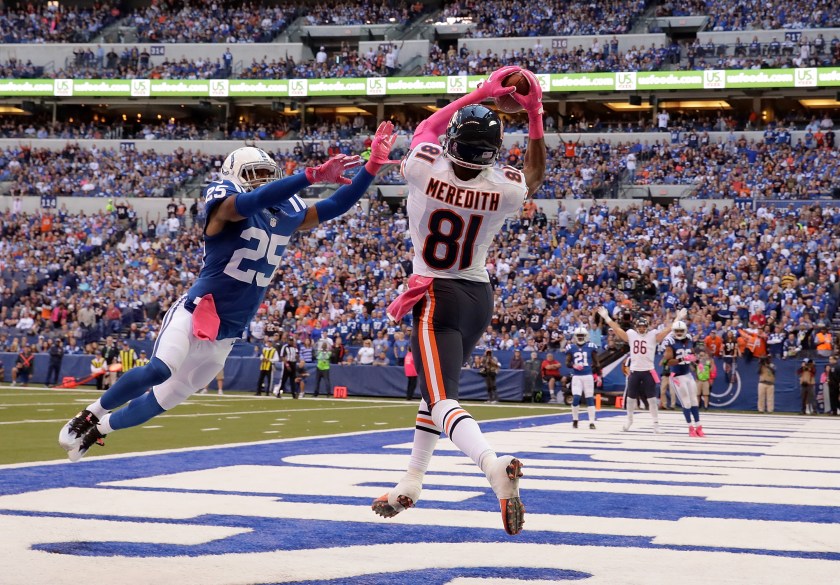 Cameron Meredith #81 of the Chicago Bears catches a touchdown pass against Patrick Robinson #25 of the Indianapolis Colts during the game at Lucas Oil Stadium on October 9, 2016, in Indianapolis, Indiana. (Andy Lyons/Getty Images)
Getty Images 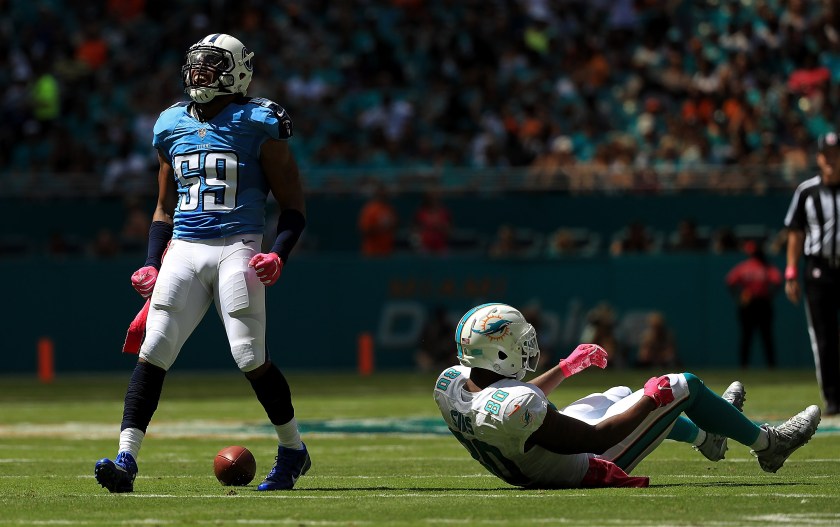 Wesley Woodyard #59 of the Tennessee Titans reacts to a play during a game against the Miami Dolphins on October 9, 2016, in Miami Gardens, Florida. (Mike Ehrmann/Getty Images)
Getty Images 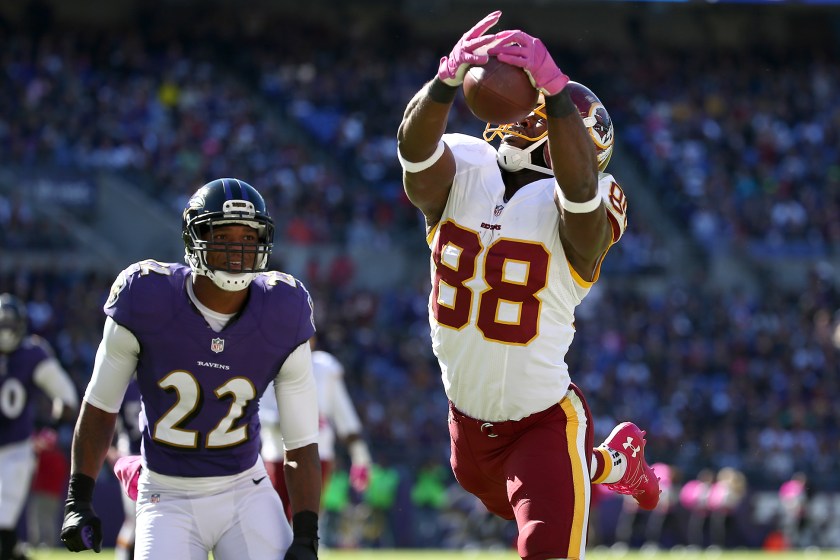 Wide receiver Pierre Garcon #88 of the Washington Redskins catches a touchdown in the second half against the Baltimore Ravens at M&T Bank Stadium on October 9, 2016 in Baltimore, Maryland. (Todd Olszewski/Getty Images)
Getty Images 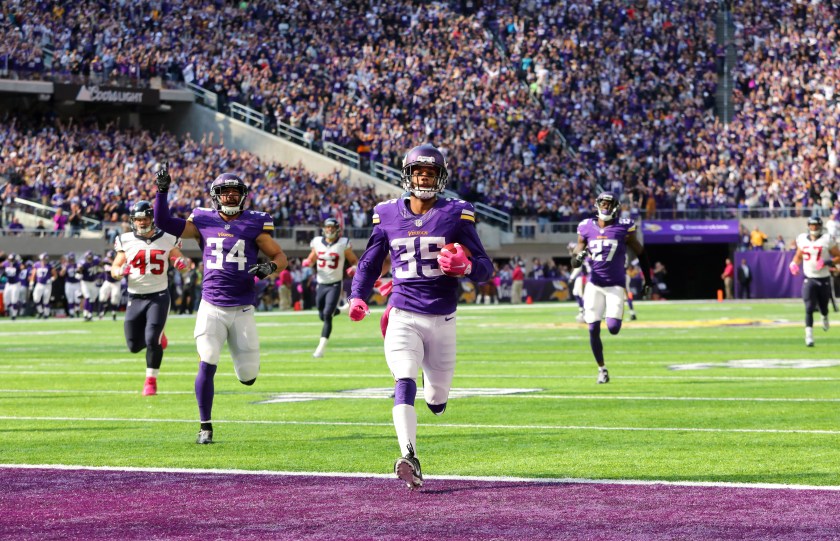 Marcus Sherels #35 of the Minnesota Vikings returns a punt 79 yards for a touchdown in the second quarter of the game against the Houston Texans on October 9, 2016, at US Bank Stadium in Minneapolis, Minnesota. (Adam Bettcher/Getty Images)
Getty Images 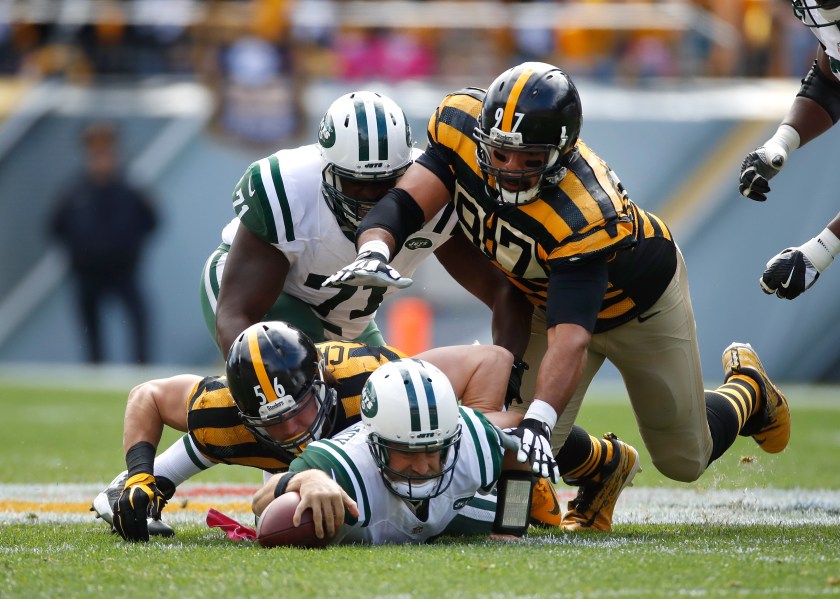 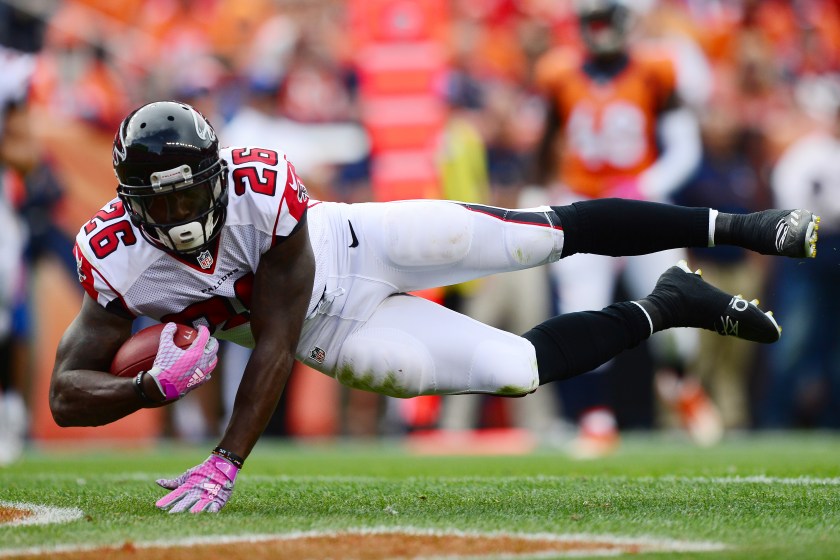 Running back Tevin Coleman #26 of the Atlanta Falcons dives for a touchdown in the third quarter of the game against the Denver Broncos at Sports Authority Field at Mile High on October 9, 2016, in Denver, Colorado. (Dustin Bradford/Getty Images)
Getty Images 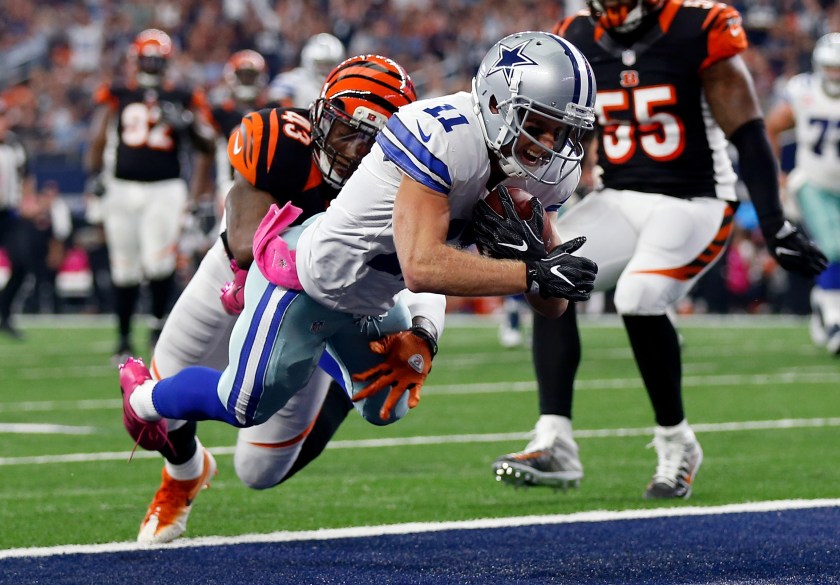 Cole Beasley #11 of the Dallas Cowboys dives into the end zone to score a touchdown after catching a pass from quarterback Dak Prescott during the second quarter against the Cincinnati Bengals at AT&T Stadium on October 9, 2016, in Arlington, Texas. (Wesley Hitt/Getty Images)
Getty Images 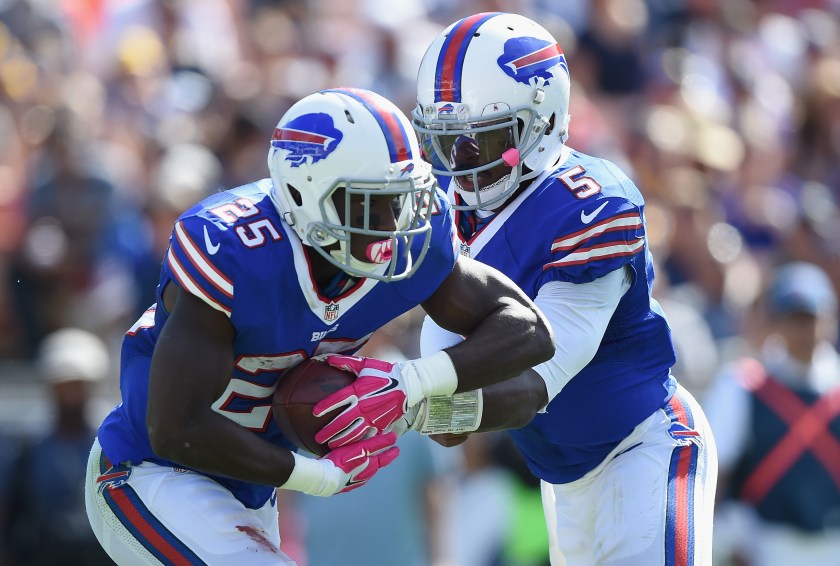 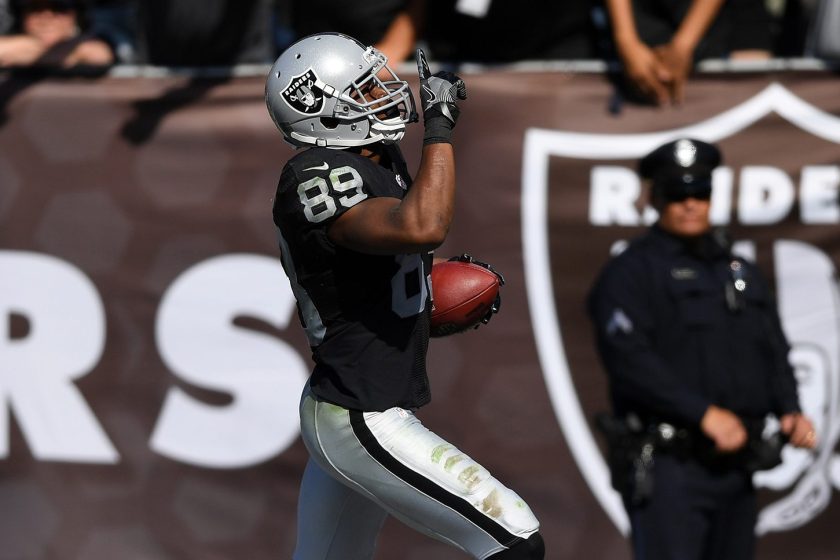 Amari Cooper #89 of the Oakland Raiders scores a 64-yard touchdown against the San Diego Chargers during their NFL game at Oakland-Alameda County Coliseum on October 9, 2016, in Oakland, California. (Thearon W. Henderson/Getty Images) 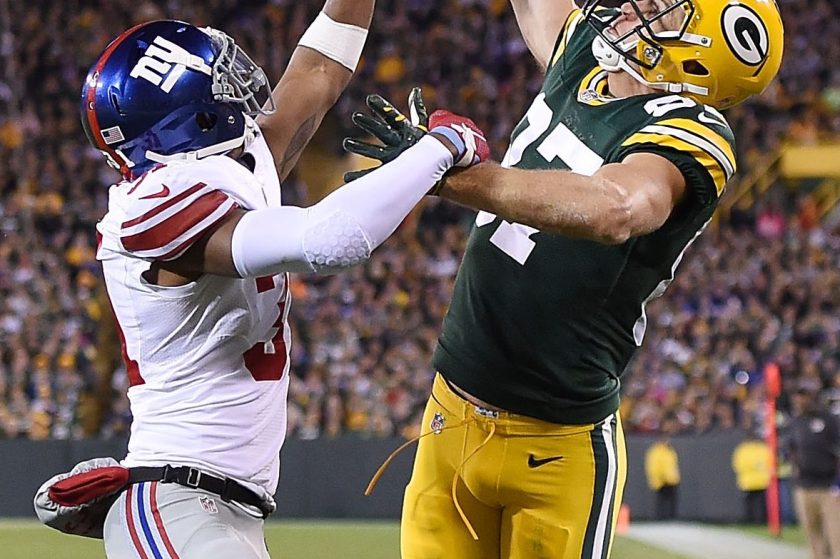 Trevin Wade #31 of the New York Giants defends a pass intended for Jordy Nelson #87 of the Green Bay Packers during the second half of a game at Lambeau Field on October 9, 2016, in Green Bay, Wisconsin. The Packers defeated the Giants 23-16. (Stacy Revere/Getty Images) 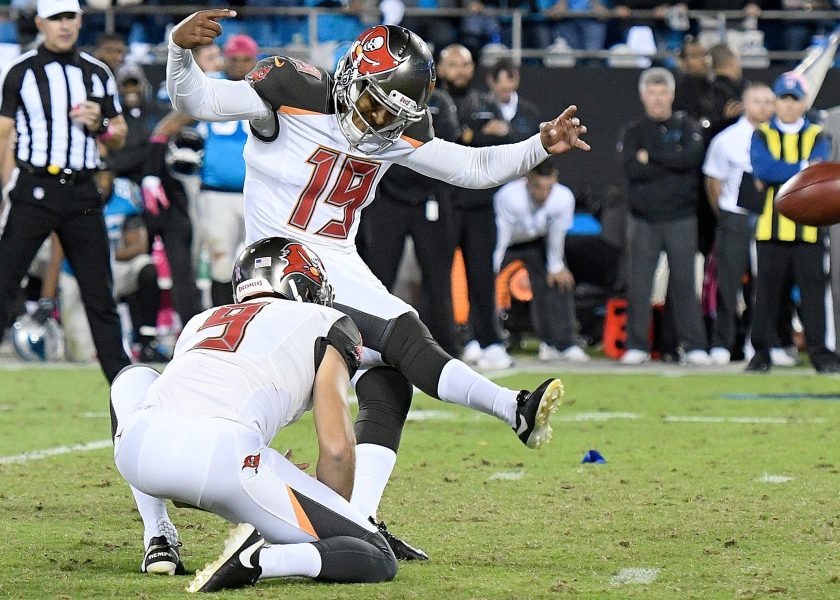 Roberto Aguayo #19 of the Tampa Bay Buccaneers kicks the game-winning field goal as time expires against the Carolina Panthers during the game at Bank of America Stadium on October 10, 2016, in Charlotte, North Carolina. The Buccaneers won 17-14. (Grant Halverson/Getty Images)