The job is never done for a minor league groundskeeper.

Max Colten arrives at Municipal Credit Union Park in Coney Island a little after 7 a.m. He straps on a backpack blower and blows the sidewalk, warning track, and both dugouts. Then he sweeps up the accumulated debris and begins soaking the dirt in the batter’s box and pitcher’s mound to make it suitably soft. No matter that the game won’t start for 12 hours. He has work to do.

“At this point, I think my body’s just kind of accepted it,” the 26-year-old Colten says, hose in hand, now spraying the pitcher’s mound in the home bullpen. “It” is an 18-hour workday, as often as five days a week during baseball season, in his roles as both head groundskeeper and clubhouse manager of the minor league (single-A short season) New York Mets affiliate the Brooklyn Cyclones. If it sounds like a lot of work for one person, well, it is. 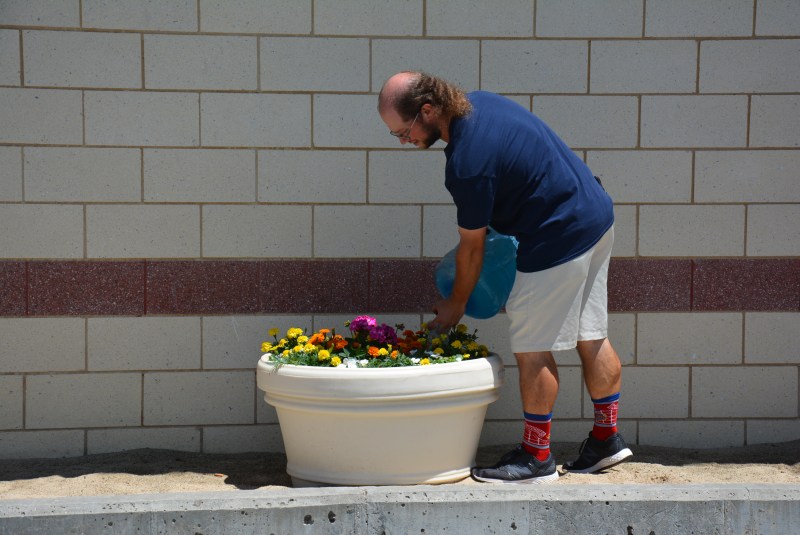 Max Colten waters the plants outside the stadium. (Robert Marston)

On days with a night game, he arrives no later than 8 a.m. and promptly begins performing a whirlwind of activities. He and his crew will, among other tasks, prepare and maintain the field; clean the areas surrounding the stadium; set up and then break down batting practice nets and cages; launder the uniforms and street clothes for the home team, visiting team, and umpires; clean the clubhouse; coordinate times for the delivery of equipment and food; and run errands. He even handles sending and distributing the team mail.

Colten’s typical postgame work—usually laundry and on-field dirt maintenance—ends around 12:30 a.m., plus or minus a half hour. For night games that stretch into extra innings, he keeps a toothbrush and change of clothes at the park—the half-hour drive to his Long Island home isn’t worth it. For a day game directly following a night game, the schedule isn’t as punishing as one might expect—Colten and his crew complete as much prep work as possible after the night game and are spared some pregame activities, like batting practice, the next day.

“It definitely is two jobs,” Colten says, now having moved on to giving the bullpen pitcher’s mound rubber a fresh coat of white spray paint. “But my bosses understand that in order to accomplish both of those, that requires assistance.” But his grounds crew is two members smaller than it was when he first joined the team nearly a decade ago. Back then, however, there was another, more notable difference. 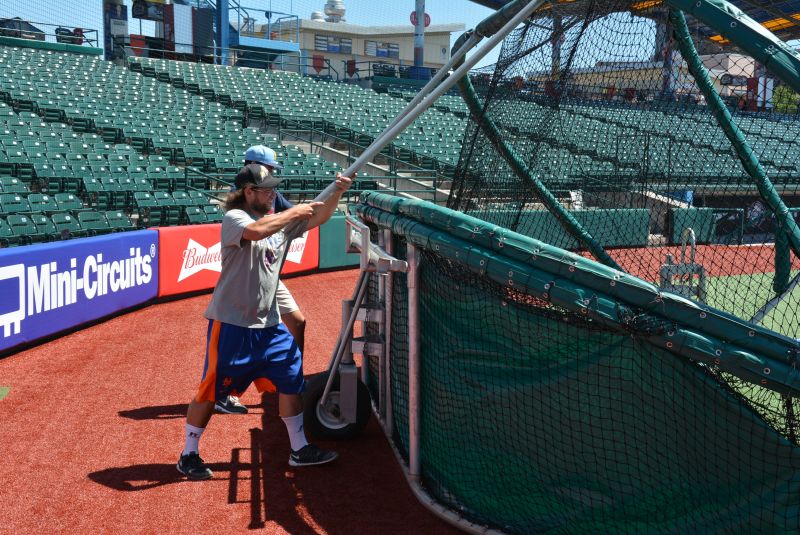 When MCU Park opened in 2001, the field was grass. But during the 2012 offseason, Hurricane Sandy submerged it under five feet of water. (The stadium’s outside wall now shows the high-water mark. It’s high.) There had been talk of switching to artificial turf in the years before the storm, but Sandy provided an impetus, and by opening day of 2013 the field was synthetic. Only the pitcher’s mound and batter’s box are still dirt. (The base paths and warning track are dirt-colored artificial turf—positively kitschy by major league standards, but not uncommon at the minor league level.)

Turf, while prized for its durability and versatility, is often scorned by baseball players for its lack of “give,” or shock absorption, which can mean painful slides and balls that don’t bounce as high as they would on grass. Colten says he hasn’t seen more than two turf-related injuries since the switch, and even those he attributed to “guys not knowing how to slide.” Anyway, he added, it’s mostly higher-level players who are down in Brooklyn on brief rehab assignments who grouse about the playing surface; players coming from college are often used to it. 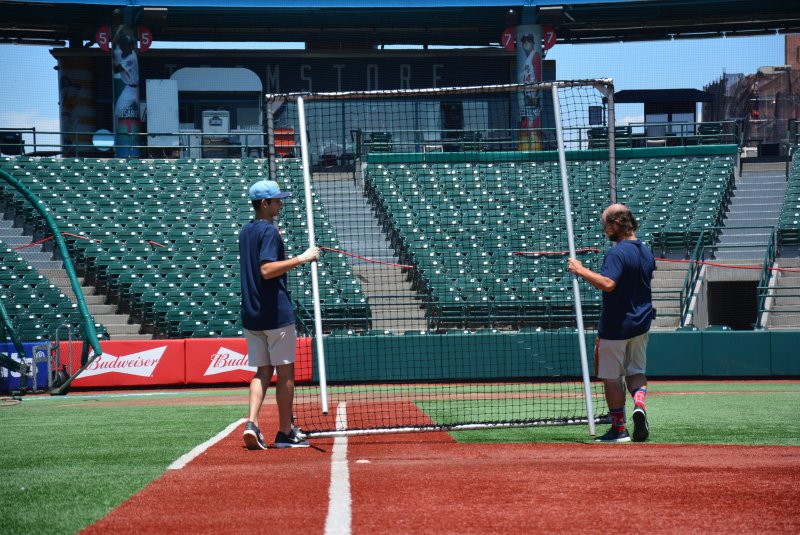 For Colten, the biggest trouble spot on the field (“by far”) is anywhere where dirt meets turf. When damp dirt mingles with crumb rubber—turf’s undergirding cushioning agent, composed of granulated tire rubber from scrap heaps—the two congeal and can be riven only by intense water blasting.

But for Colten and the Cyclones, the benefits of turf outweigh the drawbacks. Completely re-sodding a grass field, which major league teams do as often as twice a year and minor league teams do closer to every four, costs between $300,00 and $400,000. Artificial turf field installation costs at least $1 million, a sound investment considering its planned lifespan of seven to ten years. “If you can get 15 out of it,” Colten says, “you’re golden.” (And yes—with fewer dirt stains and no grass stains on player uniforms, Colten reports that the Cyclones even spend less money on detergent.)

Turf affords another advantage, especially at a time when baseball alone doesn’t draw fans in the numbers it used to. Since turf can withstand wear in a way grass can’t, the park hosts a number of other events, including football, college baseball, Ultimate Frisbee, boxing, wrestling, soccer, and even music concerts. 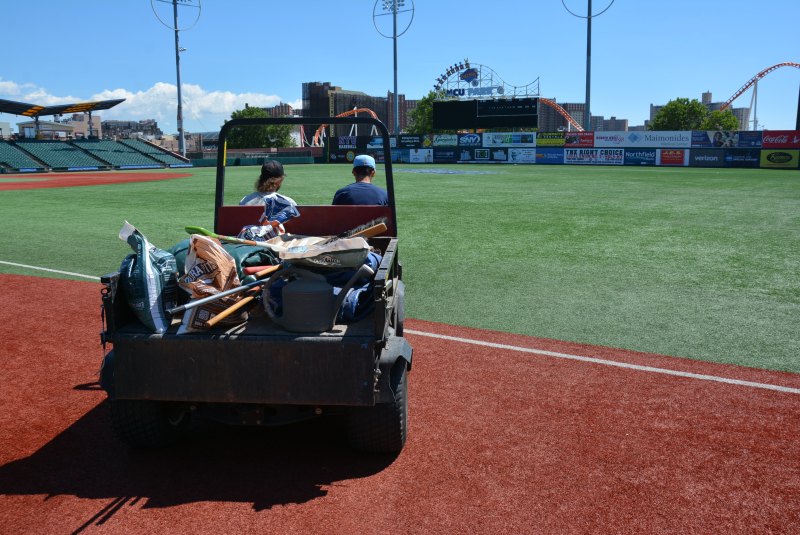 Max Colten and grounds-crew-member-in-training Jonathan ride from the home bullpen to the visitors’ bullpen, to prepare it for the game. (Robert Marston)

Soccer presents perhaps the biggest logistical headaches for Colten. Either the matches are played on the existing turf—which requires lopping off the pitcher’s mound, fitting a turf patch over the hole, and then rebuilding the mound later—or outside contractors lay more than 2,000 turf-covered four-by-eight Styrofoam blocks on the field one by one to form an entirely new field. The record set-up time is ten hours; the average is 12 to 13. (Then the whole thing has to be dismantled before the Cyclones’ next homestand.) All of this, Colten says, would be “almost impossible” with a grass field. He’d definitely need a bigger crew, and he’d get even less than his usual four hours of sleep. His already prominent farmer’s tan would be deeper still.

Colten fell into this career by chance. He had aspired to be a professional player, then quickly realized that he lacked the requisite talent. He knew only that he wanted to work in baseball, and that he wasn’t cut out to be a “sales guy,” when the Cyclones’ then-GM, a hometown acquaintance, offered him a hybrid grounds crew-stadium operations gig out of high school in 2009, which led to his getting the clubhouse manager position at just 21. 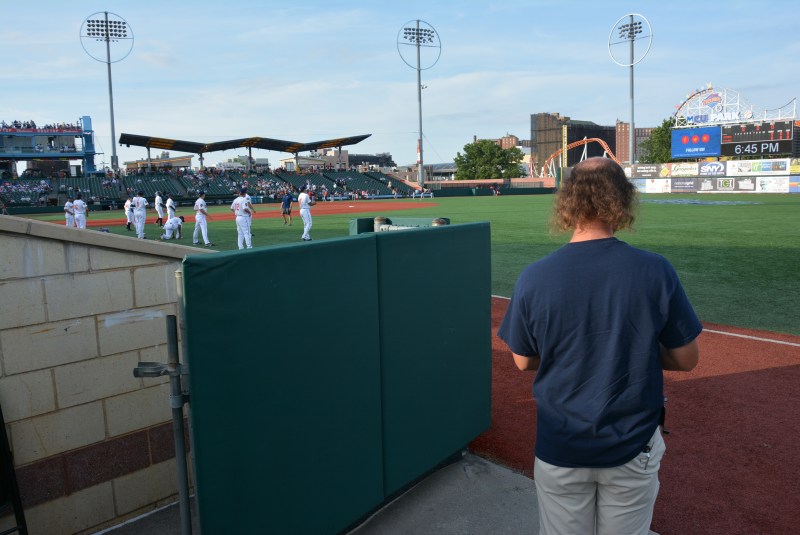 After a year in that job he took a two-year detour up the Mets’ affiliate ladder that included work in clubhouse or equipment managing capacities for the high-single-A Savannah Sand Gnats (since relocated to Columbia, S.C. and rechristened the Fireflies) and the double-A Binghamton Rumble Ponies (logo: a snarling pony in boxing gloves and a championship belt, standing upright and wielding a staff). As the Binghamton job drew to a close in 2016, the Cyclones’ head groundskeeper and head clubhouse manager jobs opened concurrently, and, after negotiations, Colten accepted them both. He knows of no equivalent arrangement anywhere else in professional baseball.

As clubhouse manager, he functions as a self-described “mom” to the players. Many of them are fresh out of college, some are still in high school, and none are over the age of 25—but all of them are confronting some harsh realities about their future in the sport. In single-A short season, the number to remember is two—as in, two percent of players make it to the majors from here, effectively answering the question, what is the most likely endgame of a collegiate baseball career? “For the most part,” Colten says, “if you’re above the age of 23 or 24 in this league, your prospects aren’t looking great.”

While Colten says the players are “generally pretty good about checking their surroundings before they let out some aggression,” a close loss may end up with him dodging helmets in the locker room. But he has a strategy. “Because I’m running the clubhouse and the grounds crew,” he says, “I kinda guilt the guys into not doing stuff like that. Even if they do something, they instantly realize that I’m dealing with it.” Often, after these tempests have blown over, offending Cyclones return to help Colten clean up.

When he isn’t dealing with tempers, he’s dealing with temperatures. This day is a balmy 83 degrees—“ideal,” Colten says. “You’ve got nice weather, you’ve got a nice little breeze, you’ve got full sun, but it’s not strong sun,” he says. “This is pretty much what I want.” The worst game-day scenario for him is scattered thunderstorms, widespread and unpredictable storms that are harder to combat than the more concentrated isolated ones, and which are exacerbated by the park’s proximity to the water.

It’s on those difficult days, he concedes, that he thinks about how he wouldn’t mind a shot at the majors himself. “I love being here, and I love Coney Island,” he says. “I would certainly love to be here forever and ever and ever. At the same time, I would like at some point to have a shot at a major league job.” In this way, he has something in common with the players who see in him an authority figure and a friend. Both know they’re lucky to work in the game they love. But neither would mind scaling the ladder a couple of rungs. 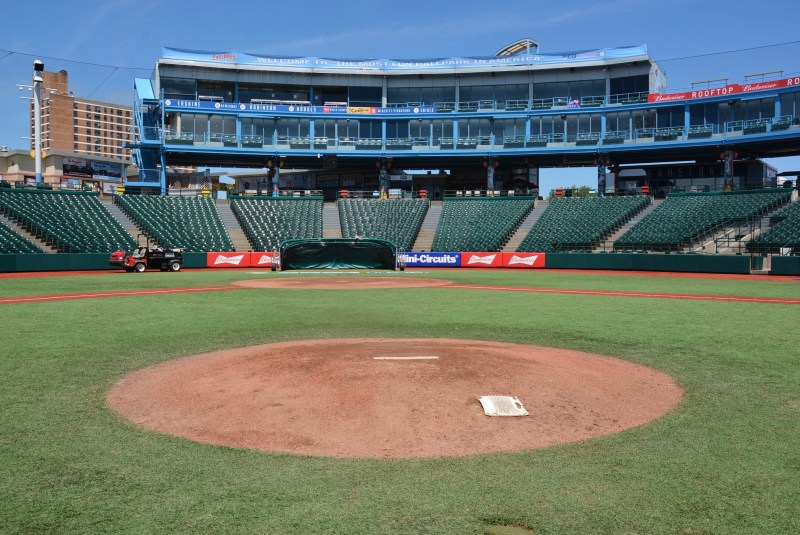 With the first pitch nearing and the Cyclones warming up along the right-field foul line, Colten can chat no longer. He excuses himself and disappears back into the clubhouse. After all, he has more work to do.