History is not in TB12's favor based on how other quarterbacks have fared at 41.

Last year at the age of 40, Tom Brady had one of the best seasons of his NFL career (32 touchdowns, 4,577 passing yards, 66.3 completion percentage, eight interceptions) while leading the Patriots to a 13-3 regular-season record and a Super Bowl berth.

Voted the NFL’s MVP last season, Brady has his TB12 method, wife Gisele, and legions of Patriots fans (including this one) on his side.

But he doesn’t have time.

Turning 41 today, Brady is basically entering into uncharted waters for most NFL quarterbacks. And, for the quarterbacks who have dipped their toe in, these waters might as well be in the Bermuda Triangle.

Of the 15 quarterbacks to start an NFL game past the age of 40 – let alone 41 – only five have managed to play in at least five more games (not including Brady).

As for their records in those past age-40 starts, the five quarterbacks who made at least six of ’em (Warren Moon, Matt Hasselbeck, Vinny Testaverde, Doug Flutie, and Brett Favre), share a combined record of a fairly tepid 40-49. That’s a very Browns-esque winning percentage of about 45 percent.

If you take it one step further and only look at the combined records of the quarterbacks who started games at 41 or older (Favre, Moon, Flutie, and Testaverde), the winning percentage dips to just 39 percent.

Not good Tommy Boy, not good. 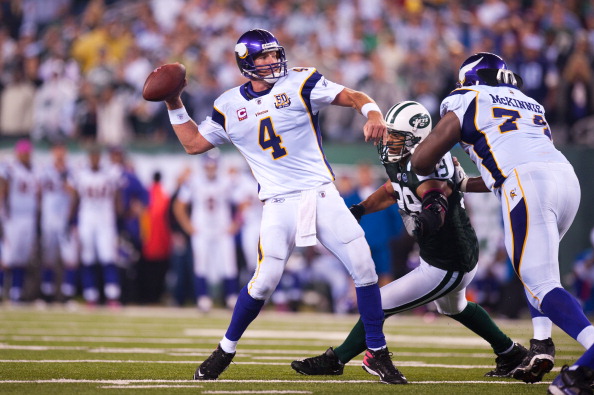 Granted, Moon, Hasselbeck, Testaverde, Flutie, and Favre all were switching teams while compiling those records and, of the franchises they collectively played for, none had the Super-Bowl pedigree the Patriots currently possess.

Also, since changing teams means learning a new offense, understanding a new scheme, and adjusting to new teammates, perhaps that should be taken into account when analyzing these numbers.

Fair enough. Let’s then take a look at the only situation involving those five quarterbacks that can directly be compared to Brady’s: Favre at age 40 with the Vikings in 2009 and at age 41 with those same Vikings the following year.

At age 40, Favre was dynamic, completing a career-best 68.4 percent of his passes while throwing for 33 touchdowns, 4,202 passing yards, and seven interceptions. The Vikings went 12-4 in the regular season that year and were one game away from making the Super Bowl.

As for that game, the NFC Championship against the Saints, Favre blew it for them in astounding fashion – a precursor of what was coming. Remember this?

Following that brutal pick with the game tied and Minnesota driving, the Vikings went on to lose in overtime thanks to a New Orleans field goal.

To his credit, Favre came back for more the following year but, as good as he was at 40, he was equally as bad at 41 and had his play fall off a cliff.

No one thought that was going to happen — and no one thinks Brady’s eerily similar age-40 numbers are going to fall off this season – except maybe Father Time.

After all, like the Giants vs. the Patriots in the Super Bowl, he’s undefeated.

Even against Tom Brady.