Former Seahawk Ricardo Lockette on the Hit That Almost Killed Him

GLENDALE, AZ - DECEMBER 21: Wide receiver Ricardo Lockette #83 of the Seattle Seahawks on the sidelines during the NFL game against the Arizona Cardinals at the University of Phoenix Stadium on December 21, 2014 in Glendale, Arizona. (Photo by Christian Petersen/Getty Images)
By Matthew Reitman 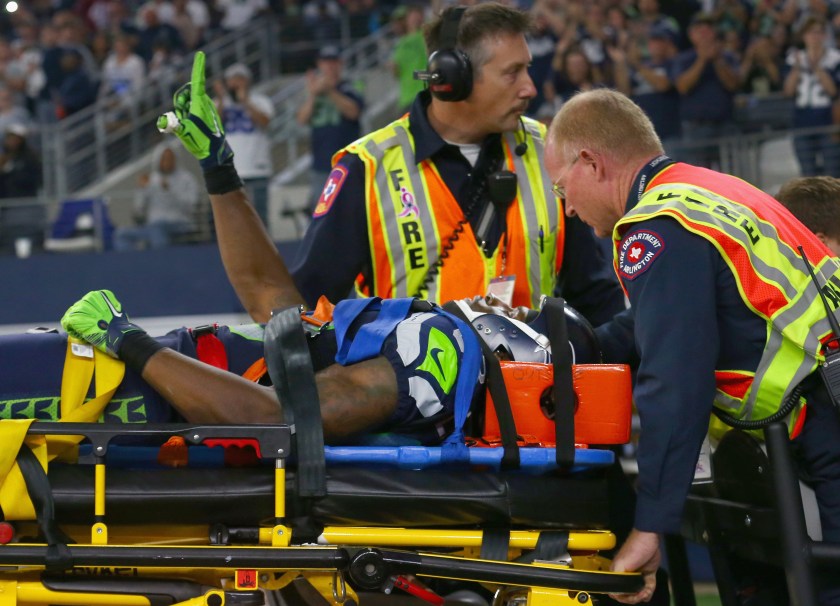 Ricardo Lockette of the Seattle Seahawks waves to fans while being carted off the field in the second quarter at AT&T Stadium on November 1, 2015 in Arlington, Texas. (Tom Pennington/Getty Images)
Getty Images

It’s a moment in an NFL player’s life that none think will happen, when he realizes he might die on the gridiron. On November 1, 2015, the Seattle Seahawks were playing the Dallas Cowboys on the road. Seahawks receiver Ricardo Lockette was on the field returning a punt when he blindly ran into Cowboy safety Jeff Heath who, seeing Lockette incoming, was already bracing for the hit. Despite a seemingly innocuous play that looks no different than dozens of hits in every game, Lockette immediately went down and could not get up. Here’s what that instant felt like in Lockette’s own words:

“In that moment, I was completely helpless. You know what it felt like? Have you ever experienced sleep paralysis? Imagine you wake up from a dream early in the morning, and you can hear everybody in your house making breakfast and talking and laughing, but you can’t move. No matter how hard you try, you can’t actually get up. You’re stuck in between being asleep and being awake.

“So you just lay there, trapped inside your own body while the world goes on around you. That’s exactly what it felt like, except I wasn’t in bed. I was at the 50-yard-line of Cowboys Stadium, surrounded by 90,000 fans.”

As it turned out, Lockette suffered neck ligament damage requiring surgery that would ultimately end his career. Read Lockette’s personal thoughts on that hit and how it changed his life here. Watch the hit unfold in slow motion below.