Only 26, the third overall 2014 draft pick may offer the kind of upside Bill Belichick covets.

Though it has yet to be made official, the Jacksonville Jaguars are fully expected to sign quarterback Nick Foles to a four-year, $88 million deal which will include $50.2 million in guaranteed cash.

In a corresponding move, the team is expected to cut Blake Bortles despite the fact they signed him to a three-year, $54 million extension which will leave $16.5 million in dead money on Jacksonville’s 2019 cap.

That means Bortles, who has already earned more than $40 million in his five-year career, will be a free agent and can sign with whichever team will have him. 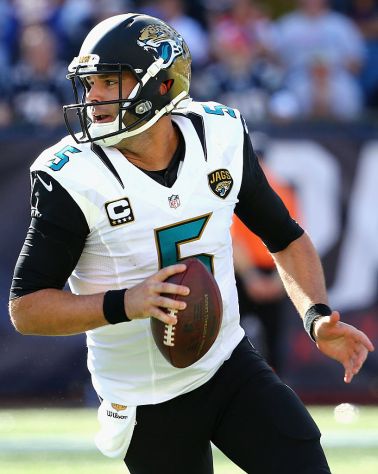 FOXBORO, MA – SEPTEMBER 27: Blake Bortles #5 of the Jacksonville Jaguars carries the ball during the first half against the New England Patriots at Gillette Stadium on September 27, 2015 in Foxboro, Massachusetts. (Photo by Maddie Meyer/Getty Images)
Getty Images

It may sound a little crazy given how poorly he played last season, but don’t be surprised if that team is the New England Patriots.

Though they have Brian Hoyer on the roster, the Patriots sorely need a solid backup behind 41-year-old Tom Brady that they can groom to eventually succeed him under center in Foxborough. Now 33 and coming off a season where he was allowed to throw two passes (completing one), Hoyer is clearly not that successor.

Consider, when Bortles was coming out of Central Florida in the 2014 draft, the Patriots would have taken him had he fallen to them at No. 62 overall. Instead, Bortles went third to the Jags and the Pats took Jimmy Garoppolo out of Eastern Illinois.

#Patriots, via Willie McGinest, have taken QB Jimmy Garoppolo from Eastern Illinois. They would have taken Blake Bortles if he fell to them

Had he been selected by New England, it’s likely Bortles would have better numbers (59.3% completion percentage, 103 touchdowns, 75 interceptions, 80.6 passer rating) over the course of his career than he does.

As the Patriots and Belichick have seen firsthand when they’ve gone against him, Bortles clearly does have some skill to his game and does have a season with 35 touchdown passes (2015) under his belt.

In three games against the Patriots, including last year’s AFC Championship game, Bortles has completed 69 of 114 passes (60% completion percentage) for seven touchdowns, two picks, and a combined passer rating of 98.85.

While those numbers aren’t great, they are markedly better than the ones Bortles has put up during performances like this one against the Chiefs last year.

Blake Bortles' game against the Chiefs was basically a blooper reel. pic.twitter.com/gbSz9edD8o

Prior to last season’s meeting with the Jaguars, Belichick compared Bortles’ skill set to that of dual-threat quarterbacks Deshaun Watson and Cam Newton.

“He runs well,” Belichick said. “He’s a big, strong kid. He’s hard to bring down. He can extend plays, so just similar to the quarterbacks we’ve seen, really, the past three weeks, not counting the Giants game, but we’ve seen this three weeks in a row with players that have that type of skill and, yeah, he’s definitely in that category.” (The Patriots played the Texans and Panthers in two of the three previous weeks.) 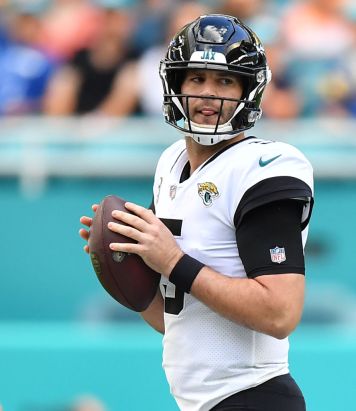 And Belichick is right about Bortles being mobile as he has 1,775 career rushing yards to go along with eight touchdowns on the ground.

Brady is certainly not a dual-threat by any means but that type of quarterback is the sort McDaniels – who drafted Tim Tebow in Denver and has interested in Lamar Jackson before last year’s draft – has been intrigued with.

And, as it’s possible he will eventually be the coach who follows Belichick on the sidelines, it only stands to reason he has somewhat of a say in the type of QB who is backing up Brady to become his eventual successor.

Perhaps most important for the value-obsessed Patriots, it would cost them very little to take a flyer on Bortles as Jacksonville is automatically on the hook to pay Bortles up to $6.5 million in 2019.

That means the Pats could sign him to the veteran minimum of $805,000 but he’d still take home the full $6.5 million as the Jaguars would be responsible for the difference, no questions asked.

However, they are exactly what Bortles could offer the Patriots if he signs on the cheap to become the latest in a long list of Brady backups in New England – but likely not the last.

NFC Championship Game Will Be Round Two of Jalen Hurts Vs. Brock Purdy