With Saquon Barkley on the shelf, McCaffrey has emerged as the NFL's best back 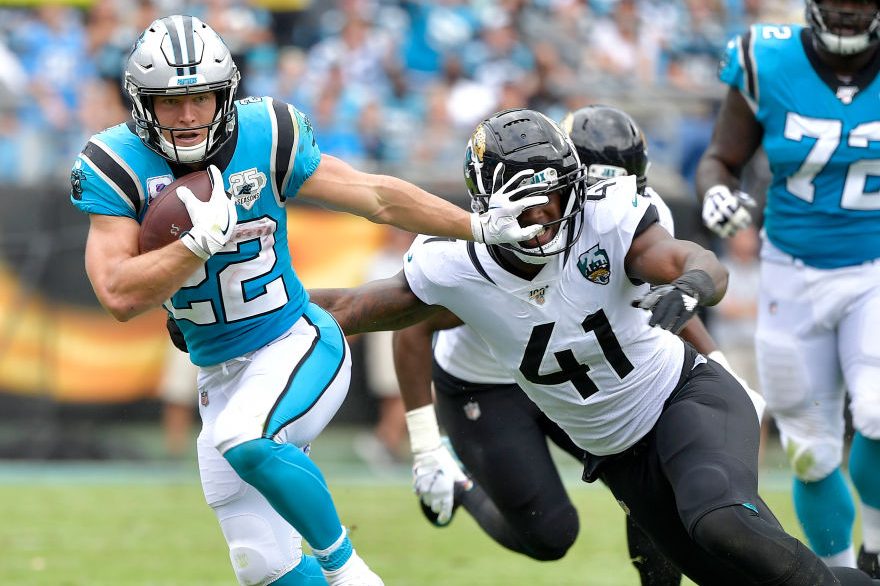 Following the Cleveland Browns getting embarrassed by the San Francisco 49ers on Monday Night Football, Week 5 of the NFL season is officially in the books and ready for analysis. While we can’t get to everything — like Ben Roethlisberger being fined $5,000 for wearing an Apple Watch and Jay Gruden being canned by the Washington Redskins  — here are five of the top storylines to emerge following Week 5, and whether we’re buying or selling on ’em.

Buy: Atlanta Falcons are the NFL’s most disappointing team

On Sunday, the Atlanta Falcons lost 53-32 to the Houston Texans to drop their record on the season to 1-4. The 53 points the team surrendered were the third most points given up by a team this season, right behind the Dolphins (59 to Ravens) and Rams (55 to Bucs).

For the season, the Falcons have given up the second most points in the league (152), behind only the winless Dolphins (163), and rank near the bottom of the league in point differential amongst winless teams like the Bengals, Redskins and Jets.

It is a horrendous start for a team that is only a few years removed from ever-so-nearly winning the Super Bowl and has most of its roster from that playoff run intact and healthy, including quarterback Matt Ryan, wide receiver Julio Jones, running back Devonta Freeman and tight end Austin Hooper.

Under coach Dan Quinn, the Falcons have only gone 18-19 in the regular season since appearing in Super Bowl LI, and it seems the changes he made this offseason — including parting ways with all three of Atlanta’s coordinators — have been ineffective.

Despite that, Atlanta still somewhat controls its own destiny, as the Falcons still have all six of their divisional games against the NFC South on the schedule. Atlanta would probably need to win at least five of those six games and only lose one other game to sniff the playoffs. Given how the team has played to start this season, that’s not a likely scenario.

Next up, the team travels to Arizona to take on a Cardinals team that, at 1-3-1, actually has a better record than Atlanta. If the Falcons lose that, look out.

(On an unrelated note, the 53-32 final margin in Atlanta’s loss on Sunday represents the first time in pro football history that particular score has been accomplished. Unique scores in the NFL are popularly known as “scorigami,” a term coined by Jon Bois.)

While new Washington coach Bill Callahan has yet to announce who will start at quarterback for the Redskins on Sunday against the Dolphins, it seems likely first-round pick Dwayne Haskins will get the call.

Haskins, who started only 14 games at Ohio State, was a favorite of Washington owner Daniel Synder coming out of college and the rumor is he forced ex-coach Jay Gruden and the rest of the Redskins’ coaching staff to draft the former Buckeye.

That being the case, it’s fair to wonder if Snyder named Callahan as Gruden’s successor with the caveat that Haskins, who threw three interceptions in his NFL debut in Week 4, would be the starter.

Based on how Haskins played when he was on the field against the Giants in Week 4, he shouldn’t be anywhere near the starting lineup if Washington is serious about his development and wants to avoid similar mistakes to the ones they made with Robert Griffin, III.

It’s true the Redskins, even by their standards, have a winnable game coming up against the Dolphins in Week 6 and that it could be nice to get Haskins some confidence against a Miami team that is giving up 40.8 points and 420 yards per game.

But even if Washington starts Haskins against the Dolphins and he excels, what does that really say about his prospects? Moreover, what if the Redskins start Haskins against Miami and he flops, as he did against the Giants and their bottom-tier defense?

It is only five weeks in, but the season is already a lost one for the Redskins. The don’t need to make it worse eroding the 15th-overall pick’s confidence without a good reason. Winning a game against the Miami Dolphins is not one.

Buy: Christian McCaffrey is the NFL’s best running back

With Saquon Barkley out with an ankle injury and Ezekiel Elliott suddenly sputtering for the Cowboys, the third member of the uppermost tier of NFL running backs, Christian McCaffrey, has stolen the spotlight and risen to a tier all his own.

McCaffrey, who has been the key piece in Carolina’s three-game winning streak, rushed 19 times for 176 yards and two touchdowns and tacked on six catches on nine targets for 61 yards and another score in the Panthers’ Week 5 win over the Jaguars.

Despite missing the Panthers’ final few drives with cramps, McCaffrey now has 866 yards from scrimmage through the first five games of the season. To date, only Hall of Famer Jim Brown had a more prolific five-game stretch to begin the year, when he racked up 988 all-purpose yards to start the season in 1963.

Averaging 117 rushing yards and 56 receiving per game, the third-year pro is on pace to hit 2,771 yards from scrimmage on the season, a mark which would break Chris Johnson’s 2009 league record by 262 yards.

As long as McCaffrey, who is playing with a backup quarterback under center in Kyle Allen, keeps carrying the ball 21 times and catching six passes per game, there’s no reason to think he can’t do it.

And if Cam Newton can come back healthy for the Panthers and give opposing defenses something else to worry about, the field could open up even more for McCaffrey. Considering what he’s doing already, that’s a scary thought.

Sell: The Buffalo Bills will miss the playoffs

In 38 games as the head coach of the Buffalo Bills (including one playoff game), Sean McDermott has gone an even 19-19.

The former Carolina Panthers defensive coordinator’s .500 record may not look all that impressive until you consider how the coaches who recently preceded the third-year head coach on the sidelines in Buffalo have done:

Judging by those numbers, McDermott must be doing something right if he has the Bills, who are at 4-1 this season, at .500 overall during his 38-game tenure.

Trailing only the 5-0 Patriots in the AFC, McDermott and the Bills are second in the NFL in yards allowed per game (275.0) and third in the league in points allowed per game (14.0). Those numbers will only improve when the Bills return from their Week 6 bye to take on the cellar-dwelling Miami Dolphins for the first time.

Following that game (which will likely run their record to 5-1), Buffalo only plays three of its remaining 10 games against teams with a winning record as of Week 6.

That means that not only does McDermott have an excellent shot at ending the season with a career record as a head coach well over .500, but also that the Bills have a stellar shot at making the playoffs for the second time in three seasons. Should they do that, it’ll be the first time they’ve made it twice in three years since 1997-99.

Buy: Russell Wilson is playing like the league MVP

With the Seattle Seahawks now 4-1 on the season following a one-point win over the Rams on Thursday Night Football last week, Russell Wilson is playing some of the best ball of his career.

Those numbers look even better when you see the kind of passes Wilson is completing this season. For example, see the 13-yard dime he completed to Tyler Lockett, a throw that had just a 6.3 percent completion probability, per Next Gen Stats.

“I thought that Russ — he stole the show tonight as he did so much. … (He) played one of the best games I’ve seen him play,” Seattle coach Pete Carroll said after seeing that play during the Seahawks’ TNF win. “I’ve just never seen him, speaking of magic, all of the plays he came up with his legs, running for one, but also, not to just to get out of trouble, but to find the receivers and make the throws just one after another.”

Wilson has been nothing short of majestic this season emerged as the league’s leading MVP candidate through five weeks, especially given that Patrick Mahomes has struggled the last two weeks as injuries have piled up around him.

He’ll need to keep that up for Seattle to have a shot at securing one of the NFC’s top playoff seeds, as the schedule really tightens up for the Seahawks going forward, with games against the Browns and Ravens in the next two weeks. Though it gets easier immediately after that (Falcons and Bucs), Wilson and the ‘Hawks only face one team with a losing record (so far) over their final seven games.

Getting past a stretch like that unscathed is the stuff MVP seasons are made of.