Dakar is nearly the equivalent of driving from LA to NYC and back, all across hostile terrain 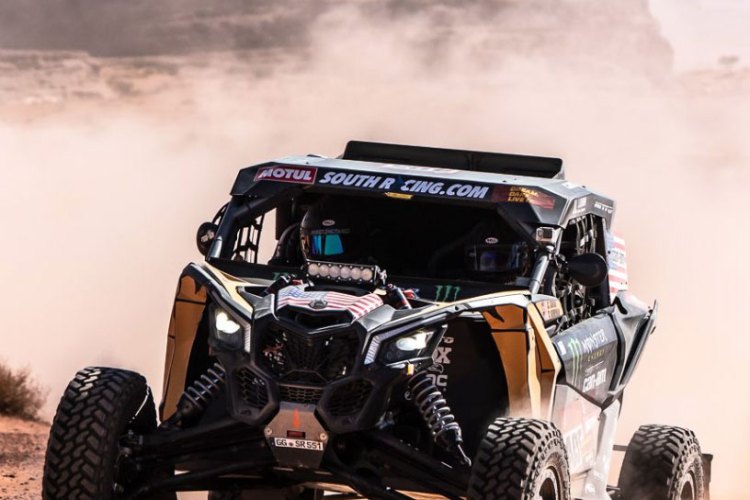 Since it was first held in 1978, when off-roaders trekked from Paris to Senegal using only a map and compass to navigate, the Dakar Rally has seen drivers from around the world battle to earn off-road racing’s biggest crown. But whether it was with a car, truck, motorcycle, side-by-side vehicle or dune buggy, one group of racers has never quite been able to conquer the top of the Dakar podium: Americans.

That changed this year in Saudi Arabia, when not one, but two Americans finished the 4,881-mile course first in their respective vehicle classes.

One was Ricky Brabec, who won the motorcycle category. The other was Casey Currie, who won the side-by-side vehicle class after being the first to make it from the port city of Jeddah on the Red Sea to the finish line in Riyadh over 12 days of GPS-free racing.

With his co-driver/navigator Sean Berriman riding shotgun, Currie piloted his Can-Am Maverick over hundreds of kilometers of sand, rocks and dunes for up to 12 hours per day. Currie, 36, found that the race took a toll on him physically as well as mentally, especially once he took the lead about halfway through the course.

“Being in the position that I was in, it looked like we were going to win the rally, but we had six more days,” Currie tells InsideHook. “Six days of the gnarliest terrain in the world and there were reporters trying to claim that I had it in the bag. I’ve never been in that situation. It wears on you mentally. All you do is sleep, eat and think about how you’re going to fail. No American had ever done it. It truly was the most challenging thing I’ve ever done. Now I know why they call it the hardest race, because it truly is a mental, physical, team and just overall challenge.”

During the rally, Currie and Berriman were generally waking up around five to six o’clock in the morning, getting in the ATV around seven or eight o’clock, and not getting out of it until six or seven at night.

“Only myself and the co-driver were allowed in the car from when we left in the morning until we finished at night,” Currie says. “We couldn’t get help from anybody. When you’re in the race car, there’s no communication with the outside world at all. It’s all about preparation, even down to the small things like what you’re going to eat for breakfast every day and having it lined up. It was the same in the vehicle. We completely dissected it and completely understood where all the spare parts were in the Can-Am if we had any problems and had to fix something.”

It may sound simple, but that sort of knowledge is very important at endurance races. Out of the 342 vehicles that started the 2020 edition of Dakar, only 234 made it to the finish line.

“On good days, you just drive the car and never get out,” Currie says. “On the bad days, we get flat tires or break components in the suspension from hitting a rock or just basically over-driving the vehicle. We started noticing that when other competitors were having problems, they were stopping for a long period of time. What myself and my co-driver really worked on was going, ‘Okay, if there’s a problem, this is how we’re going to fix this, this, this, this and this. So here’s every tool we need.’ Every time we had what was a bad day for us, it was faster than everybody else’s bad day even though it was the same tires and parts that were broken. We were able to get our car fixed and back on the road faster than anybody else.”

In all, Currie got a total of five flat tires and broke one axle, but never had the kind of bad day that ended Dakar early for more than 100 of his fellow competitors.

And given the terrain Currie was racing on in Saudi Arabia, breaking something was certainly not out of the realm of possibility.

“The sand dunes are not tall, but they’re sharp,” he says. “The way the wind blows over there, it’s almost like the ocean. Instead of the dunes all being the same, you’re getting waves from all different directions. There are peaks and soft spots in all areas so the sand can have multiple angles to it. When I say peaking, you’ll be driving and all of a sudden there’ll be a 25-foot vertical drop straight down. If you fly off it, you’re going to be in a lot of pain. You’re also driving across crazy rock beds that are razor-sharp for 20 or 30 miles at a time. From there we get into sand washes where rivers have flown before. So there’s a lot of sand and rock. And then you get silt, which is basically like flour you’re going to use to go bake a cake. Imagine driving in three feet of flour for 20 miles and it’s just poofing in your face. It’s just a crazy experience.”

And, with the 2021 Dakar Rally set to take place in Saudi Arabia too, it’s a crazy experience Currie is looking to have again.

“The plan is definitely to go back,” he says. “I’m excited. I feel like we learned a lot and like we’re only going to get better from here.”