Can Tim Tebow Actually Be a Hit in the Majors?

Here's what players, coaches, scouts, and executives have said about Tebow's prospects.

Earlier this week, news broke Jose Canseco – he of the 462 career home runs in Major League Baseball – was interested in becoming the new J.C. in Tim Tebow’s life by hooking the former Heisman winner up with some free hitting advice.

Whether that’s realistic or not is still up in the air, but there’s little doubt the 31-year-old minor leaguer could use some power tips from the former slugger as he currently has just 14 home runs in 701 minor league at-bats as a member of the New York Mets organization. Of those 701 at-bats, zero have come at the AAA level.

And that’s probably a good thing for Tebow because when he’s had a chance to hit elite pitching as he has at major-league spring training over the past two years, he’s only gone 5-for-45 (.111 average) in 16 games. 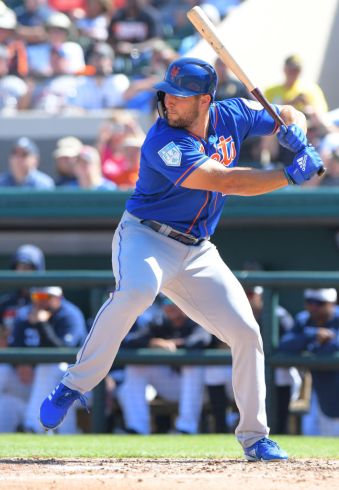 That said, it hasn’t been all bad for Tebow and he actually started showing signs of life before breaking a bone in his hand last July. Prior to the injury, he hit a respectable .273 with six home runs, 14 doubles, and 36 RBIs in 84 games for Double-A Binghamton.

To help get an idea about Tebow’s chances to excel in the majors if he ever does get called up to The Show, we’ve compiled a collection of what players, coaches, scouts, and executives have said about his prospects.

As you’ll see, the former Heisman winner has some qualities that have been a hit with some, as well as a number of strikes against him.

Hit: Opposing scout speaking anonymously (June 2018): “He has shown the ability to hit the fastball. Not a double-plus fastball, but an average fastball. He has progressed. He still misses a lot of pitches down. The changeup, he doesn’t see at all.”

Strike: MLB Prospect Christopher Crawford (August 2016): “Based on what I heard/saw in limited video, there’s a lot of fringe-average tools here. He ran an average 60 time, and with some trimming, maybe you’re looking at an above-average runner. There’s just as good of chance because of his massive frame that he’s a below-average runner long-term, however. The arm action isn’t prototypical, and the reports I had were average. He appeared to have decent hands in the outfield and caught what was in front of him, but the routes weren’t efficient, and he’s gonna have to work on backpedaling. So basically there’s one plus-plus tool (power), one well below-average tool (hit) and everything else looks to be 40-50 grade.”

Hit: Special assistant with a National League club (September 2016): “There’s no question he has raw power. He was hitting the ball 450 feet in batting practice. Against live pitching, he competed on every pitch. Fastballs, he was making contact. Breaking balls and offspeed, he needs a lot of work. He has two above-average tools, but the rest of his game is very raw. The ball explodes off his bat and he competed. If he’s 100 percent committed to baseball, he might have an outside shot.” 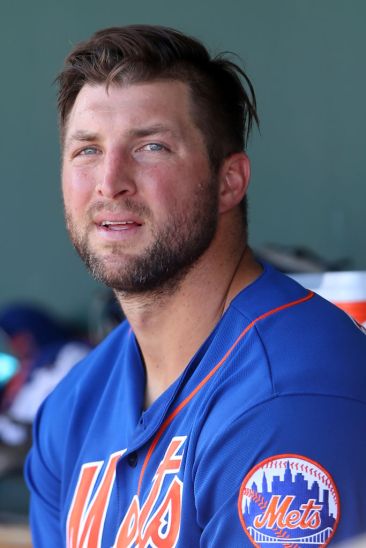 Strike: Baseball America scout (May 2017): “I believe Tebow is an organizational player. I do not think he is a major leaguer. But if he progresses like he has at low Class A and continues to hit at other levels, then if not this September, it will be next September—if the Mets are out of playoff contention—that he will (receive a callup), just as a marketing, public relations thing. But if you are looking at him, without looking at those things, he is a mid-level organizational player. I would not recommend him to our club because we try to scout to build a championship club. He does not check those boxes for me.”

Hit: Double-A Hartford manager Warren Schaeffer (June 2018): “He looks like a different guy than last year. I saw him last year at [Single-A] Columbia. He’s come a really long way. He’s a tough out right now. We had a really tough time against Tim Tebow. He hits fastballs well. He’s a strong kid. His approach has gotten a lot better. He’s spitting on pitches now he wasn’t early on this year. You can tell he works hard.”

Strike: ESPN baseball writer Keith Law (January 2017): “I think Tim Tebow should stick to announcing and never play baseball again. He was the worst player I’ve ever seen in the 10 years I’ve been going to the Arizona Fall League. He might be better suited to playing in an Arizona high school league. His presence here is a farce, and he looks like an imposter pretending to have talent he does not possess.”

Hit: Mets manager Mickey Callaway (February 2019): “He did a tremendous job last year. This kid has confidence, because he works. And I definitely see a baseball player out of Tim Tebow. Not just because he’s in a uniform, but because he wants it so bad. We’re just going to get him out there as much as possible. We want to get him out there and see major league pitching. And I know he’s going to continue to improve because that’s who he is.”

Strike: Former MLB slugger Jose Canseco (March 2019): “He needs help. I just saw him. The swing looks so mechanical, so bad. I’m surprised nobody’s helping him out. His swing is really too short and too rotational to create power.” 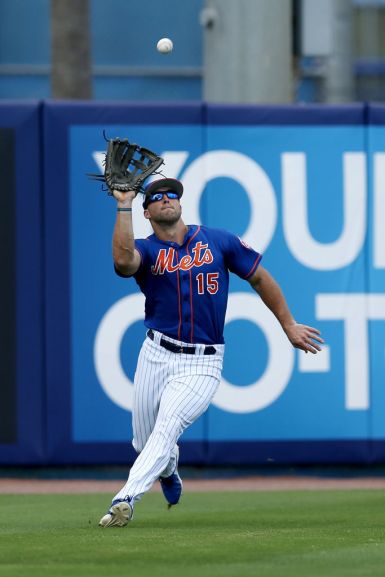 Hit: Pro scout for a National League team (September 2016): “He’s a big, strong athletic guy who has great makeup. Those are qualities we look for in any player, whether they’re 18 or 29. I saw big raw power. It’s a strength-based swing, but he’s got above-average bat speed. It’s just about seeing movement and the changing of speeds, and all that comes with at-bats. When he made contact, the ball jumped off his bat. It’s going to be a tough thing, a big hill to climb. He’s got to hurry up and get his at-bats. It’s kind of like a crash course. He needs every at-bat he can get.”

Strike: Editor of the baseball scouting website 2080 Baseball Mark Shreve (June 2018): “While the numbers may show a player adapting to Double-A pitching to some degree, the incredibly high strikeout rate, lack of pitch recognition, and overall approach at the plate do not project his hit tool beyond his present level.”

Hit: Former Mets general manager Sandy Alderson (February 2018): “I think he will play in the Major Leagues. That’s my guess. That’s my hope. And to some extent now after a year and a half, a modest expectation.”

Strike: Senior scouting official with a National League team (September 2016): “There’s a real ‘wow’ factor when you get up next to him and see how physical he is. How it translates to the baseball field? It’s hard to move like you need to when you’re that big and strong. I don’t think Tim realizes how good even high Class-A players are, let alone Major League players, [and] how long it takes to hone your skills to play at that level. For a guy who took 10 years off, a football player who’s trying to play baseball, it’s great. When you put the microscope on him and compare him to Minor League players and Major League players, it’s not the same.”

Hit:  Tebow himself (February 2019): “This will be like, sort of the biggest spring training for me,” the 31-year-old Tebow said. “This journey isn’t defined by just getting there. I think, shoot, I’ve already enjoyed it enough to say it’s worth it. The whole process. Would that be awesome? Of course it would. It would be such an amazing thing and it would be so enjoyable, but at the same time, regardless of what happens, I know that I’ll enjoy it every day, and I think that’s the biggest thing for me.”

The New York Mets open the year on the road in Washington against the Nationals on March 28.

Based on all the evaluations above, though it’s a small one, Tebow does have a prayer of being on the roster.