Will the Chicago Bears Ever Have a Great Quarterback Again?

Watching their QB struggle is something Bears fans have been used to for a long, long time 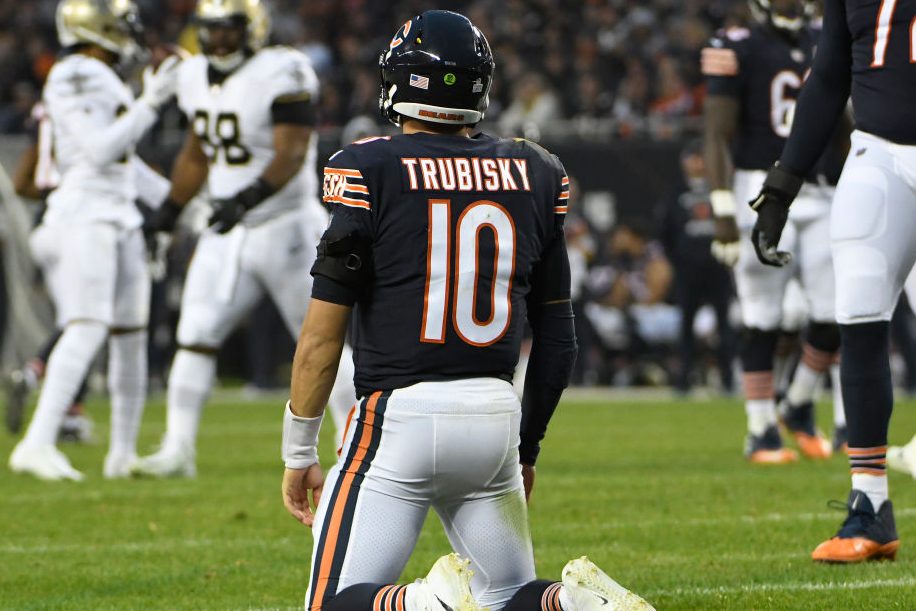 Mitchell Trubisky of the Chicago Bears on the field after being hurried. (David Banks/Getty)
Getty Images
By Evan Bleier / November 14, 2019 8:30 am

If it’s fall in Chicago, you know the marathon is coming up, the wind will be whipping off Lake Michigan soon, and the Bears will have some inept jabroni playing quarterback.

Founded in Decatur, Illinois, in the fall of 1920 and moved to Chicago the following year, the Bears franchise is one of only two remaining franchises from the NFL’s founding in 1920. Synonymous with professional football in America, the Bears were selected to kick off this season against their rival Green Bay Packers to mark the NFL’s 100th season, a choice which nodded to the team’s historic link with the league.

Under center that night for the Bears? Mitchell Trubisky, the team’s first-round draft pick in 2017. Trubisky, as he’s proven wont to do, threw an interception while struggling to lead Chicago’s offense as the Bears fell 10-3 to their chief rivals.

Though the name on the back of the jersey has changed, seeing a starting quarterback struggle is something Bears fans have grown very accustomed to over the years. Since Sid Luckman was voted a first-team All-Pro in 1941, 1942, 1943 and 1944, the Bears have never had a first-team All-Pro at quarterback in consecutive seasons, and have had only two players earn the distinction at all (Luckman in 1947 and Johnny Lujack in 1950).

And Hall of Famers? Forget about it.

Related: Why Can’t Hall-of-Fame QB John Elway Find One for the Broncos?

Even though they’ve been around longer than all of their iconic NFL peers, the Bears have yet to send a single quarterback to the Hall of Fame since the AFC-NFC merger (Luckman was enshrined in 1965), while teams like the Cowboys (Troy Aikman and Roger Staubach), Packers (Brett Favre and Bart Starr), 49ers (Steve Young and Joe Montana) and Dolphins (Bob Griese and Dan Marino) have sent two. The Bears are also the only team in their division without a Hall of Fame quarterback in the modern era (the Lions’ Bobby Layne and Vikings’ Fran Tarkenton to go with the Packers’ pair).

The Bears did have Canton inductee George Blanda on their roster from 1951-1958, but Blanda only spent one season as the team’s first-string quarterback and spent more of his time in Chicago playing linebacker and serving as the team’s placekicker — not exactly a strong endorsement of the organization’s ability to evaluate the quarterback position.

Obviously the Pro Bowl and Hall of Fame aren’t the only metrics for determining if a quarterback is any good or not, so let’s look at another one: playoff wins. Since McMahon quarterbacked the ’85 Bears to a win over the New England Patriots in Super Bowl XX, Chicago has won a grand total of six playoff games.

McMahon won one of those games (1988), Jim Harbaugh won another (1990), Steve Walsh got one (1994), Rex Grossman actually won two (2006) and even Jay Cutler got one (2010). Needless to say, when no one has won more playoff games than Grossman, the proud owner of a 55.2 career completion percentage and more interceptions (60) than touchdown passes (56) over the last 30-plus years, things at the quarterback position are not going well for your franchise.

And Grossman is far from the worst quarterback to suit up for the Bears since their Super Bowl win in ’85. He can’t be when the list also includes names like Peter Tom Willis, Rick Mirer, Cade McNown, Moses Moreno, Henry Burris, Caleb Hanie and Jimmy Clausen. Which brings us back to the latest name on the list: Trubisky.

Now 19-16 as a starter (including the playoffs), Trubisky will be eligible to sign a contract extension with the Bears over the summer in advance of his fourth season in the NFL. If he’s smart, he’ll do it. If the Bears are, they won’t.

At times, Trubisky has looked like the franchise QB the Bears thought they were drafting when they traded four future picks to move up and snatch him second overall in the 2017 NFL Draft, but those times have been few and far between. Meanwhile, two quarterbacks who were drafted after him — Deshaun Watson and Patrick Mahomes — appear as if they’re going be franchise QBs in the NFL for a very, very long time.

Mahomes and Watson, not Trubisky, are the type of elite quarterbacks the Bears should be striving to identify and build around going forward. Sure, they haven’t been able to do it in decades, or really ever, but it’s never too late to start.

And maybe they already have …