Alonzo Mourning Discusses the Evolution of the NBA Big Man 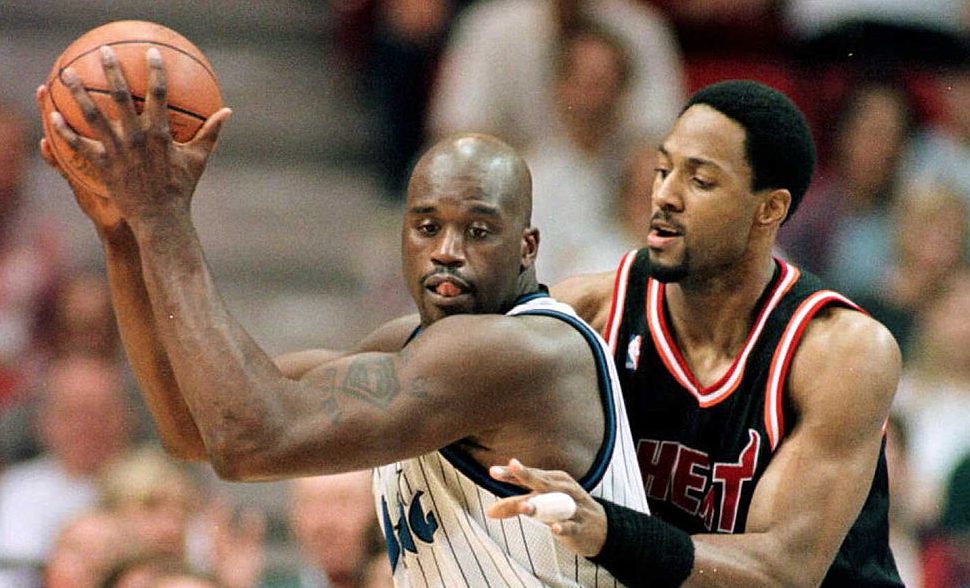 Shaquille O'Neal grabs a rebound in front of Alonzo Mourning (TONY RANZE/AFP via Getty Images)
By Evan Bleier / December 11, 2019 6:00 am

When centers Shaquille O’Neal and Alonzo Mourning were drafted back-to-back in the 1992 NBA Draft by the Orlando Magic and Charlotte Hornets, they entered an NBA landscape that was already crowded with future-Hall of Fame big men: Patrick Ewing, David Robinson, Hakeem Olajuwon, Dikembe Mutumbo.

Forever linked because of their draft numbers, O’Neal and Mourning took the league by storm, with both averaging more than 20 points and 10 rebounds while shooting better than 50 percent from the field and blocking 3.5 shots per game as rookies. This was during a bygone era of NBA basketball when players were more interested in exchanging elbows than daps, and position battles in the paint often turned into career-long wars.

“It was tough, man,” Mourning — who spoke with InsideHook on behalf of Guardian Life Insurance and is adamant that disability does not mean inability — tells InsideHook. “You had the toughest group of centers in the league that the NBA had ever had. Competition every night. You really couldn’t take too many nights off because there were so many great centers in the league. That’s kind of changed now because there aren’t as many dominant back-to-the-basket players in the NBA. But back then, it was very challenging, it truly was.”

Naturally, a rivalry ensued, with O’Neal and Mourning each winning two of their first four meetings on the NBA hardwood.

“We were adversaries and we were two alpha males that were basically marking our territory in the league,” Mourning says “Any time we competed against one another, it was an extreme battle, it truly was.”

That battle raged on until 2002, when Mourning was diagnosed with life-threatening kidney disease and missed nearly two years while undergoing a kidney transplant. Able to make it back to the NBA at the tail end of 2003-2004 season, Mourning was not nearly effective as he had been in the past, but playing basketball was able to help him heal nevertheless.

“When I think about the transplant, it was the most humbling experience in my life,” Mourning says. “To be broken down physically and mentally and stripped of what I knew and loved: the game of basketball. Then having to start from scratch and build my body back up with a brand new organ in me … It was one of the most challenging, humbling and difficult things I had ever experienced. But basketball was my therapy. It was my motivation. It was my refuge. And I was able to come back and inspire so many people just by coming back and getting back on the court playing again.”

Ironically, Mourning returned to the Heat in a role backing up O’Neal, who had come to play for Miami after winning three championships with the Los Angeles Lakers. Playing as allies instead of rivals, the two were able to help the Heat win the NBA Championship in 2006.

“We would have never thought in our wildest dreams that we would become teammates and world champions together,” Mourning says. “But that’s the way it worked out and we ended up developing a brotherly type of relationship which allowed us to do some special things together on the court.”

In today’s NBA, players more often tend to start as friends, with genuinely bitter rivalries developing later, if at all. But that’s not the only way the league has changed in the decade-plus since Mourning retired.

“I think the game has evolved tremendously,” Mourning says. “The rule changes have negated the physicality on the perimeter to where it’s a lot more difficult to guard perimeter plays because you can’t touch them now because of hand-checking. With Golden State and Houston, a lot of their success was built around them shooting an abundance of threes. That became infectious throughout the NBA and more teams incorporated that into their offenses. There are a lot of players who shouldn’t be shooting threes — but they’re shooting them.”

“The game has evolved so much to where teams are demanding that players don’t clog up the middle,” Mourning says. “If you’ve got players closing out on you and nobody’s in the painted area posting up, it opens up driving lanes and allows players to get to that rim a little easier. So people love it when you have centers that are able to stand out on the perimeter and knock down threes. Teams don’t want players posting up. They want an abundance of three-point shots and driving lanes to be open.”

Despite the changes, Mourning does see at least one player who reminds him of himself: Anthony Davis.

“I think about Anthony Davis, his defensive ability, his shot-blocking, his rebounding,” Mourning says. “He faces up a whole lot more than I did, but he also plays with his back to the basket quite a bit. And he shoots more threes than I did. But if I had to match my game to anybody, it would be Anthony Davis.”

So could Mourning take him one-on-one?

“What do you think about that?” he says. “It’s not what I think, it’s what you think. You already know my answer. I’m in the Hall of Fame for a reason. ‘Cause I was fearless.”

Marie Kondo Your Home With These “Clutter-Slaying” Furnishings

We Found a Pair of Nike Joggers for Just $30

They're for running. But we don't care what the hell you do in 'em.

Eight Items Our Staff Wants From the Backcountry Winter Sale

We have very, very good taste