LOS ANGELES, CA - OCTOBER 21: Los Angeles Lakers players Dwight Howard #12, Kobe Bryant #24 and Steve Nash #10 what to resume action against the Sacramento Kings during a pre-season game at Staples Center on October 21, 2012 in Los Angeles, California. NOTE TO USER: User expressly acknowledges and agrees that, by downloading and/or using this photograph, user is consenting to the terms and conditions of the Getty Images License Agreement. Mandatory Copyright Notice: Copyright 2012 NBAE (Photo by Andrew D. Bernstein/NBAE via Getty Images)
By Sean Cunningham 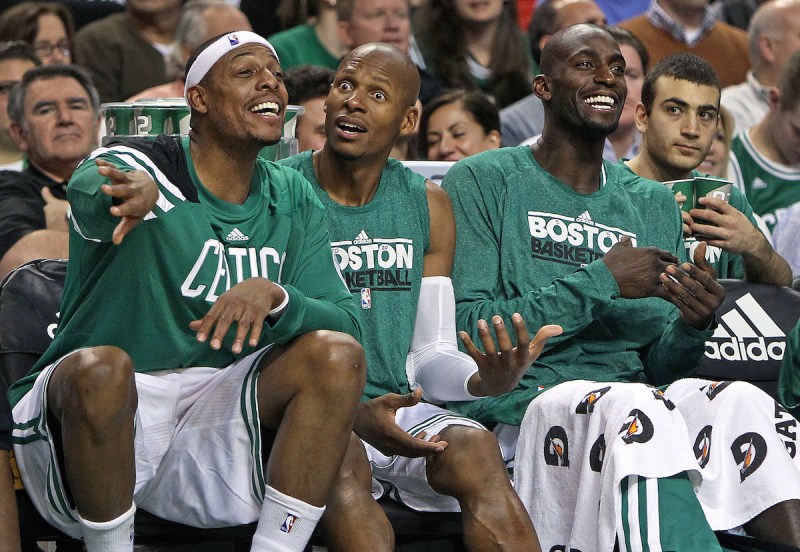 Paul Pierce, Ray Allen, and Kevin Garnett have some fun on the bench during the fourth quarter. The Boston Celtics hosted the Detroit Pistons in an NBA regular season game at the TD Garden, the team’s home opener (Globe Staff Photo/Jim Davis)
Boston Globe via Getty Images

This year, all fans will be focused on Kevin Durant joining Steph, Klay, and Draymond on the Golden State Warriors, who got off to a less than rousing start by being absolutely destroyed by the Spurs in their season opener. Last season, it was LeBron James and Kevin Love teaming with Kyrie Irving in Cleveland. (Of course, LeBron’s return to Cleveland was only possible because he had previously fled to Miami, where he met up with Dwyane Wade and Chris Bosh.)

The fact is, NBA elites have been coming together for years, with decidedly mixed results. As the new season begins, here are some teams that merged magically—think Boston’s Paul Pierce discovering Kevin Garnett and Ray Allen had suddenly become Celtics in 2007, and the Big Three promptly winning a title together—as well as a few that should’ve stayed apart. 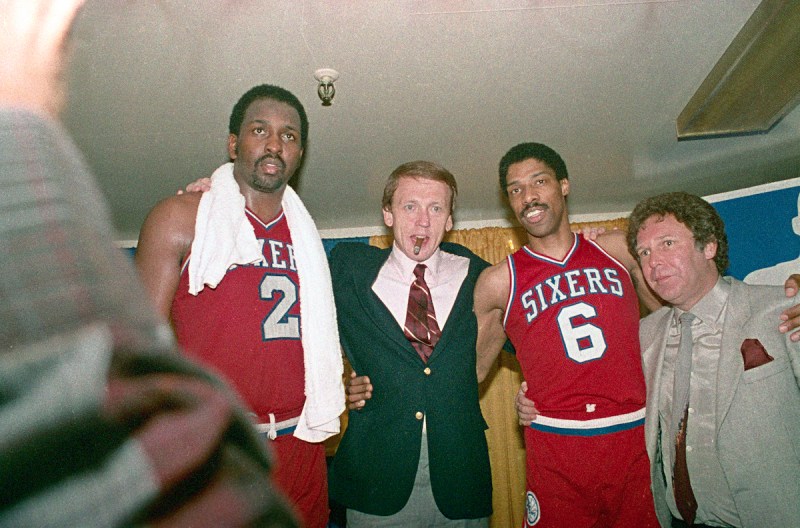 Philadelphia 76ers’ Moses Malone (2) and Julius Erving (6) hug their coach Bill Cunningham in the dressing room after the 76ers made a clean 4 game sweep over the Los Angeles Lakers to win the NBA Championship at the Forum 5/31, 115-108. (Getty)
Bettmann Archive

What Happened: Led by Julius Erving, Philadelphia had lost in the NBA Finals in 1982, at which point they added one of the all-time great centers, Moses Malone. This time they would not be denied, with Malone’s “Four, four, four” prediction damn near coming true. (They had two sweeps and won the other series in five.)

Low Point: It fell apart amazingly quickly, as they lost in the first round to the Nets the next season and never returned to the finals, even after they were joined by a gifted (if overweight) rookie named Charles Barkley in 1984. 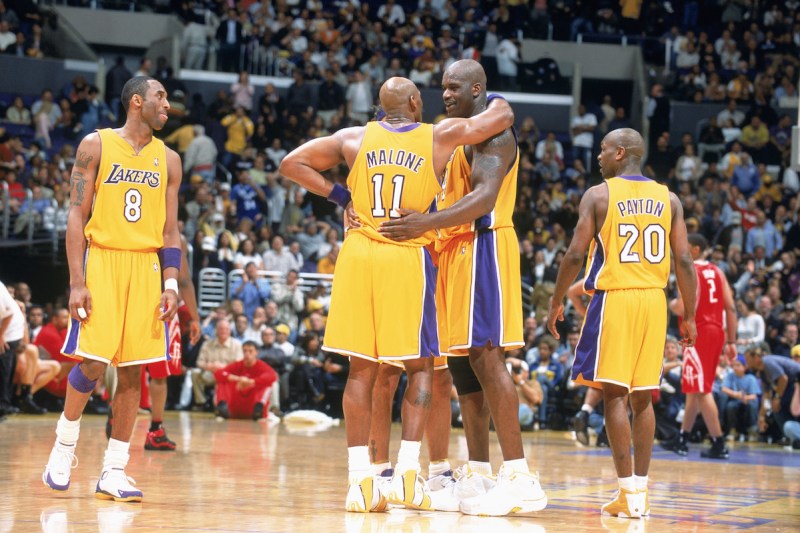 Shaquille O’Neal #34 of the Los Angeles Lakers talks with Karl Malone #11 during the game against the Houston Rockets at the Staples Center on April 1, 2004, in Los Angeles, California. The Lakers won 93-85.  (Andrew D. Bernstein/NBAE via Getty Images)
NBAE/Getty Images

What Happened: Shaquille O’Neal and Kobe Bryant had already won three titles together under coach Phil Jackson, so adding two future Hall of Famers would have seemed to make the team a lock. A sexual assault trial of Bryant, however, ensured that their time together was never less than bizarre.

High Point: Managed to make the NBA Finals in 2004, before losing to the Pistons.

Low Point: Malone retired after that single season; and O’Neal, Payton, and Jackson all left the Lakers in the offseason. With the team suddenly his and his alone, Kobe’s Lakers failed to make the playoffs. 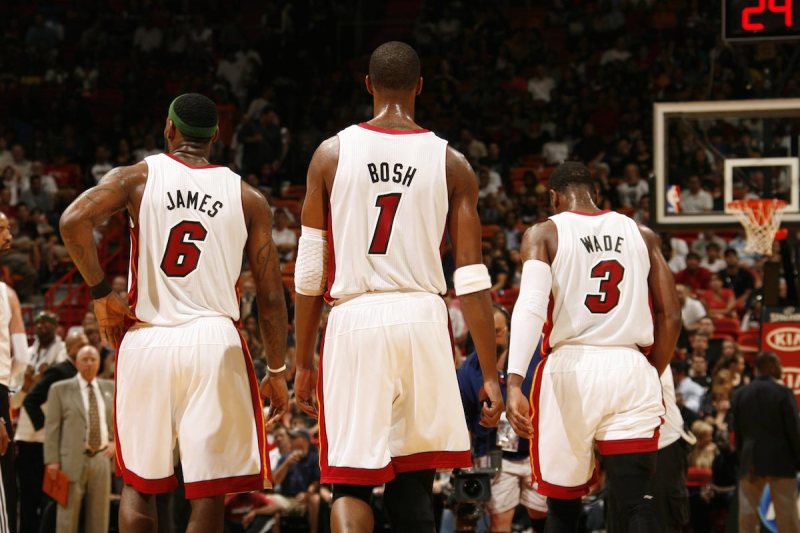 LeBron James #6, Chris Bosh #1, and Dwyane Wade #3 of the Miami Heat stand on the court during the NBA game against the Charlotte Bobcats on April 8, 2011, at American Airlines Arena in Miami, Florida. (Issac Baldizon/NBAE via Getty Images)
NBAE/Getty Images

2010: LeBron James and Chris Bosh Take Their Talents to Miami

High Point: Okay, no one will ever forget LeBron’s “not three, not four …” title prediction (which they obviously failed to meet), but still, back-to-back championships ain’t that bad. 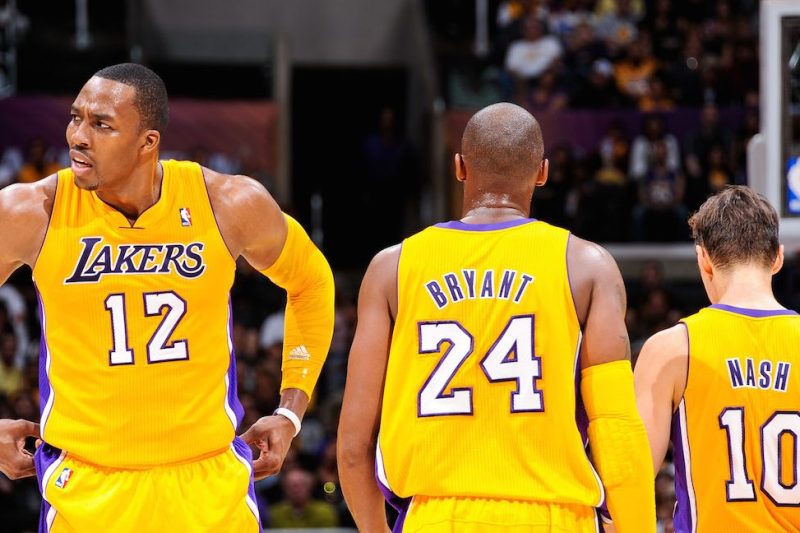 What Happened: Kobe Bryant and Pau Gasol, who’d already won two titles together, suddenly had as teammates a three-time Defensive Player of the Year and a two-time MVP.

Low Point: Nash was physically no longer capable of playing at an All-Star level—or, most of the time, even playing. Howard bolted after a single season, and Gasol eventually left too, leaving Bryant’s Lakers to average about 22 wins a season over the brutal final three seasons of his career.