If you have a sports soul, you should root against Steph Curry, Kevin Durant, and Draymond Green.

In the spring of 2007, the Golden State Warriors pulled off one of the biggest upsets in the history of the NBA and became the first-ever No. 8 seed to defeat a No. 1 seed in a seven-game playoff series.

Back then, they were lovable underdogs, led by Baron Davis and Stephen Jackson, who dispatched league MVP Dirk Nowitzki and the Dallas Mavericks in six games. They advanced to the second round of the playoffs for the first time since 1991 when Tim Hardaway, Mitch Richmond and Chris Mullin – Run TMC – brought Golden State to the promised land of the postseason. 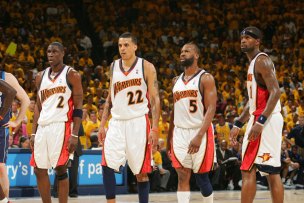 With a roster filled with role players like Matt Barnes, Mickael Pietrus, and Al Harrington, those run-and-gun Warriors were real dirt dogs and had a pair of gritty leaders in Davis and Jackson — who rained three-pointers like no one was watching. They were incredibly easy to root for over the heavily favored Mavericks.

In the words of S.E. Hinton, that was then, this is now.

No longer outsiders, the current Golden State Warriors have won three out of the last four NBA titles and have a legit chance of winning their third in a row this season.

If they do, the Warriors will establish themselves as the most dominant team in the NBA since Kobe and Shaq’s Lakers three-peated in The Association from 2000-2002.

However, even if they lose, Golden State has already cemented itself as the most unlikeable team in pro sports, surpassing the New York Yankees, New England Patriots, and Manchester United.

Here are seven reasons why that’s the case.

1. Draymond Green has gone from underdog to a-hole: An unheralded second-round draft pick, Green had an immediate impact on the Warriors, doing all the little things that helped his team win without getting too much of the credit. That all changed after the Warriors won their title when Green was rewarded for all of his hard work with a five-year, $82 million contract. Now a three-time All-Star, Green, to his credit, still does all the little things that help the Warriors win. But he now also brags about his defense, constantly complains to officials during games, and is such a poor sport he wouldn’t shake Tristan Thompson’s hand after beating him and the Cavs in Game 4 of this year’s NBA Finals. He also does plenty of this stuff:

2. Kevin Durant is so thin-skinned he made a fake Twitter account to attack critics: Twitter is, by and large, a cesspool. And cesspool you probably shouldn’t be wading to if you are a pro athlete, unless you are fully prepared to have anonymous trolls tweet at you with the most offensive things they can think of on an hourly basis. In order to help him say the things he wanted to say on social media but couldn’t because of his status, Durant created a burner Twitter account, a deception to which he later was forced to admit. Using the account, Durant referred to himself in the third-person (always the sign of a real winner) and defended himself for leaving Oklahoma City to join the front-running Warriors.

4. The DeMarcus Cousins signing: The rich got richer this offseason when the Warriors added the four-time All-Star to their roster. Similar to what they did when the added Durant to a squad that had just won 73 regular-season games, Golden State all but assured they’d be playing for the NBA title in June by making a move in July during free agency. With the move, Golden State can now field a complete starting five (Curry, Klay Thomson, Green, Durant, Cousins) of All-Stars once Cousins is healthy. The signing is totally legal and even logical for the Warriors, but it is far from likable. And far for good for the competitive balance of the league.

5. The majority owner of the Golden State Warriors, Joe Lacob, is a cocky SOB: When he was interviewed for a profile in a March 2016 issue of The New York Times Magazine, Lacob boasted the Warriors, who had won their first title the previous June, were “light-years ahead” of the rest of the NBA. “We’ve crushed them on the basketball court, and we’re going to for years because of the way we’ve built this team,” he said. “We’re light-years ahead of probably every other team in structure, in planning, in how we’re going to go about things. We’re going to be a handful for the rest of the NBA to deal with for a long time.” Lacob was obviously right because these comments came before the Warriors signed Durant and, later, Cousins, but that doesn’t make it any lest wrong to say out loud. 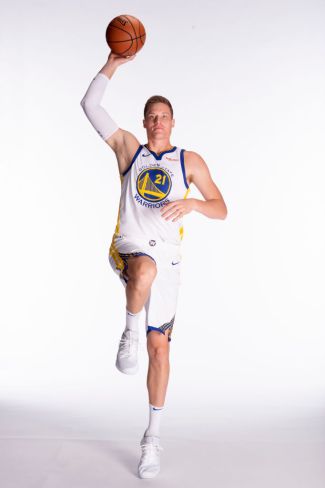 Jonas Jerebko #21 of the Golden State Warriors poses for a portrait during Media Day on September 24, 2018 at the Warriors Practice Facility in Oakland, California. (Photo by Noah Graham/NBAE via Getty Images)
NBAE/Getty Images

6. The Warriors are campaigning to get five players on the USA Basketball team: With Steve Kerr now an assistant on Gregg Popovich’s Team USA staff for this summer’s Basketball World Cup in China, Curry, Durant, Green, Cousins, and Thompson, have all reached out about playing for the international team in that tourney, as well as the 2020 Olympics in Tokyo. Were they all to make the team, the Warriors would be the first NBA franchise to land five players on Team USA. “That would be awesome,” Thompson told ESPN of the prospect of five Warriors making the team. “I don’t know if that’s ever happened in the history of the NBA, so that would be awesome. It gets me excited just thinking about it.” Save some gold medals, and NBA titles, for someone else, Klay.

7. Jonas Jerebko is now on the Warriors’ roster: Just kidding about that being a reason to hate the team. Jonas is alright. Could probably take some better team photos though.

The Warriors open their season tonight against the Oklahoma City Thunder. If you have a sports soul, you should be rooting against them.

The 30 Best Simpsons “Treehouse of Horror” Segments, Ranked
11 Veteran WFH’ers Name the Single Most Important Item in Their Home Office
Dueling Town Halls Channel Bob Ross and Wrestlemania on "SNL"
How to Bet Week 6's Best Games, According to the Pros
On "Real Time," Bill Maher Ponders Pandemic Readiness and the Supreme Court Hearings
Why the UK's 1970s Punk Scene Is Relevant in America in 2020

Why the UK's 1970s Punk Scene Is Relevant in America in 2020
How the Best Memes of 2020 Are Embodying a Chaotic, Terrible Year
"New Yorker" Writer Suspended After Exposing Himself on Zoom