What If the Amazon Rainforest Wasn’t Always So Wild?

NEAR ALTAMIRA, BRAZIL - JUNE 15: The Xingu River flows near the area where the Belo Monte dam complex is under construction in the Amazon basin on June 15, 2012 near Altamira, Brazil. Belo Monte will be the world’s third-largest hydroelectric project and will displace up to 20,000 people while diverting the Xingu River and flooding as much as 230 square miles of rainforest. The controversial project is one of around 60 hydroelectric projects Brazil has planned in the Amazon to generate electricity for its rapidly expanding economy. While environmentalists and indigenous groups oppose the dam, many Brazilians support the project. The Brazilian Amazon, home to 60 percent of the world’s largest forest and 20 percent of the Earth’s oxygen, remains threatened by the rapid development of the country. The area is currently populated by over 20 million people and is challenged by deforestation, agriculture, mining, a governmental dam building spree, illegal land speculation including the occupation of forest reserves and indigenous land and other issues. Over 100 heads of state and tens of thousands of participants and protesters will descend on Rio de Janeiro, Brazil, later this month for the Rio+20 United Nations Conference on Sustainable Development or ‘Earth Summit’. Host Brazil is caught up in its own dilemma between accelerated growth and environmental preservation. (Photo by Mario Tama/Getty Images)
By Sean Cunningham 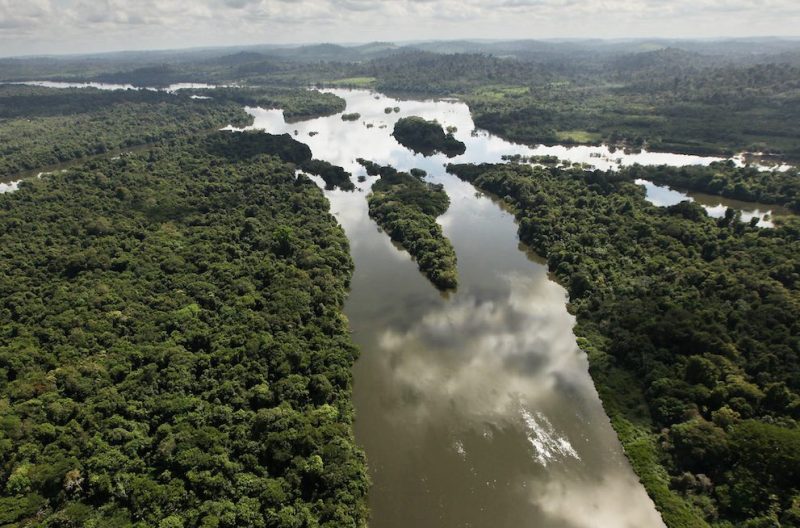 The Xingu River flows near the area where the Belo Monte dam complex is under construction in the Amazon basin on June 15, 2012 near Altamira, Brazil. (Mario Tama/Getty Images)

In 1492, Columbus arrived in the Americas, soon followed by many other Europeans who quickly changed two continents. One of the few areas believe to have been largely unaltered in the 500 years since then is the Amazon Rainforest, which makes the desire for environmentalists now to leave it untouched all the more intense.

Some recent scholarship, however, argues that far more of the Amazon had actually been settled before Columbus than previously believed. There are theories arguing that European diseases decimated native populations to an even greater degree than imagined. Some areas would have seemed as if they were never inhabited at all to Europeans when they reached them, so total was the depopulation. 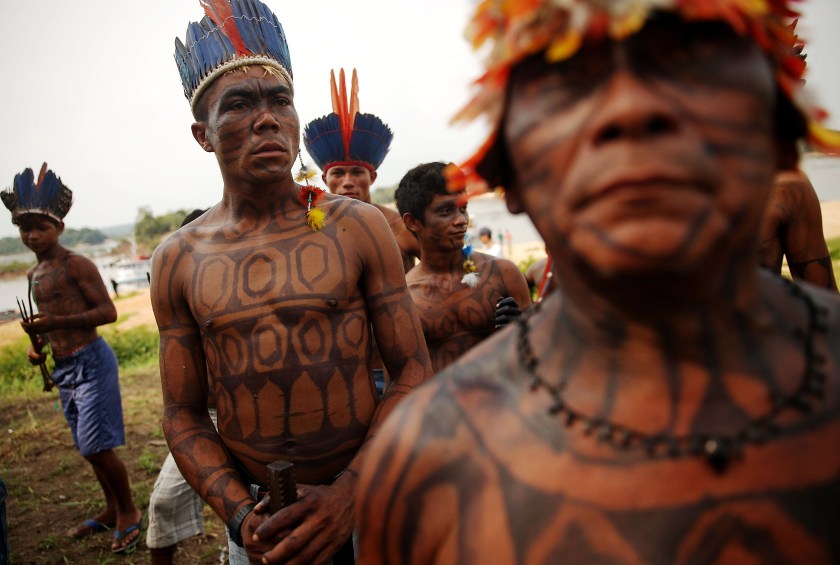 Members of the Munduruku indigenous tribe gather along the Tapajos River during a “Caravan of Resistance’” protest by indigenous groups and supporters who oppose plans to construct a hydroelectric dam on the Tapajos River in the Amazon rainforest on November 27, 2014 in Sao Luiz do Tapajos, Para State, Brazil. (Mario Tama/Getty Images)
Getty Images

Indeed, there is speculation there may have been eight million people in the Amazon Rainforest, who built communities and cultivated the land only to die and have it all become forest once more.

Charles C. Mann writes about much of this scholarship in The Atlantic. Below, he attempts to explain why this work has inspired both champions and critics, as well as the ways in which it could be seen by some as troubling and by others as inspiring:

“Indeed, Meggers’s recent Latin American Antiquity article charged that archaeologists who say the Amazon can support agriculture are effectively telling ‘developers [that they] are entitled to operate without restraint.’ Resuscitating the myth of El Dorado, in her view, ‘makes us accomplices in the accelerating pace of environmental degradation.’ Doubtless there is something to this—although, as some of her critics responded in the same issue of the journal, it is difficult to imagine greedy plutocrats ‘perusing the pages of Latin American Antiquity before deciding to rev up the chain saws.’ But the new picture doesn’t automatically legitimize paving the forest. Instead it suggests that for a long time big chunks of Amazonia were used nondestructively by clever people who knew tricks we have yet to learn.”

To the full article, click here. Below, watch a short National Geographic video on villages in the Amazon.