The Power and Morality of Gene-Editing

Zhou Yin of the Yunnan Key Laboratory of Primate Biomedical Research in Kunming, China, shows off a young long-tailed macaque raised from a CRISPR- modifed embryo. Dozens of other organisms— including chickens and cattle, mushrooms and wheat, catfish and koi—have been engineered with CRISPR to carry specific genetic traits. Many more will follow. (Greg Girard/National Geographic)
By Matthew Reitman 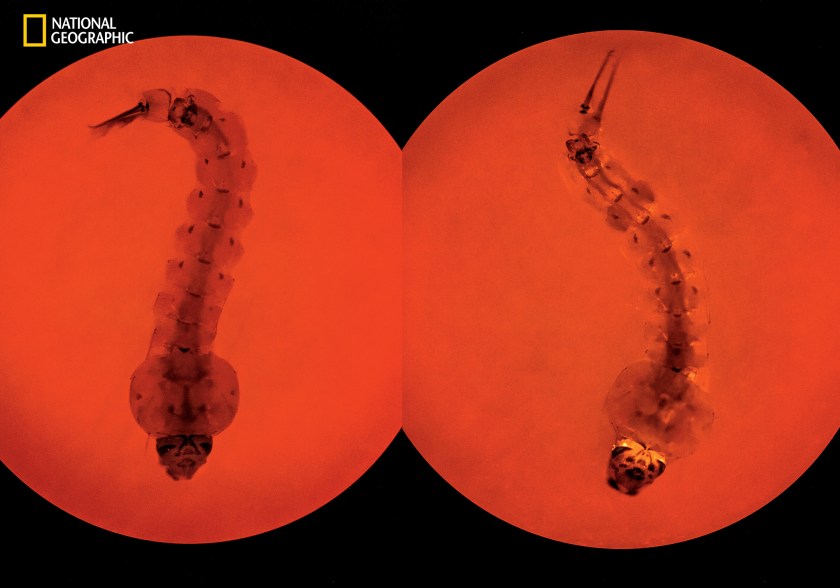 Mosquito larvae in the laboratory of Anthony James at the University of California, Irvine, pay witness to how a dreaded disease might be stopped. Both are Anopheles stephensi, a major carrier of the malaria parasite in urban Asia. Using a technique called CRISPR, James has edited a gene in the larva on the right so that the insect cannot transmit the parasite. A fluorescent protein signals that the experiment has worked. Released in the wild, mosquitoes engineered with CRISPR and a tool called gene drive could eventually replace the wild mosquitoes that carry the disease. But too much uncertainty still exists to put such science into practice. (David Liittschwager/National Geographic)

We’ve known this day was coming for quite some time, but now that we possess the capability of altering the DNA in any living organism, there are questions about its morality. The revolutionary new technology called CRISPR-Cas9 has already proven its worth, helping to correct genetic mutations that cause muscular dystrophy and cystic fibrosis in laboratory animals. It is unequivocally the most significant yet controversial scientific breakthrough of this decade. 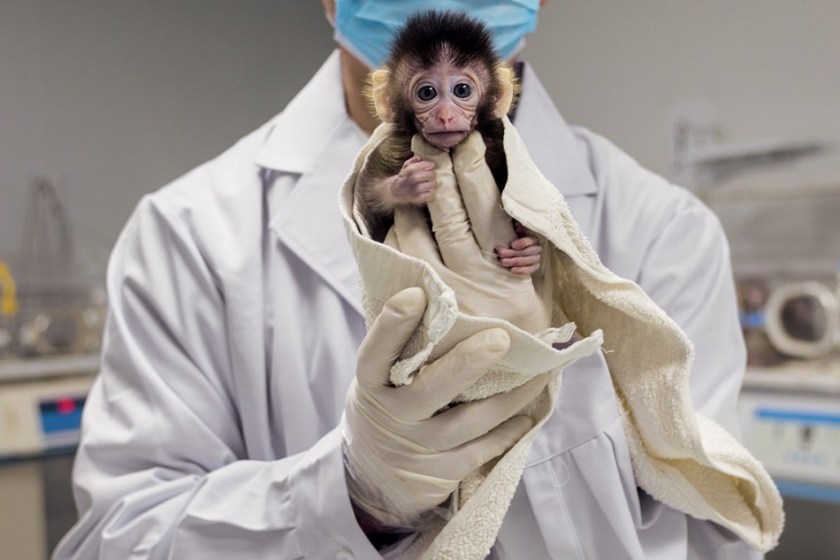 Zhou Yin of the Yunnan Key Laboratory of Primate Biomedical Research in Kunming, China, shows off a young long-tailed macaque raised from a CRISPR- modified embryo. Dozens of other organisms— including chickens and cattle, mushrooms and wheat, catfish and koi—have been engineered with CRISPR to carry specific genetic traits. Many more will follow. (Greg Girard/National Geographic)

Scientists are experimenting with using the gene-altering technology to find a cure for AIDs and malaria. These applications of CRISPR are objectively viewed as beneficial to all humankind. But some are worried it could be a slippery slope—specifically leading to the editing of an embryo’s germ line, which contains the genetic information that is inherited from generation to generation. By editing that coding, one could essentially rewrite a family’s biological history forever.

Director of the Humane Genome Project Eric Lander described CRISPR as “a remarkable technology, with many great uses” in a recent interview with National Geographic magazine but also expressed reservations about the technology going too far. “[If] you are going to do anything as fateful as rewriting the germ line, you’d better be able to tell me there is a strong reason to do it,” noted Lander.

In the August 2016 issue of National Geographic magazine, this topic is explored in depth with a visit to Chinese labs in Shenzen where CRISPR technology is used. A preview of the story using photos from National Geographic‘s current issue can be found below, with the whole story here. 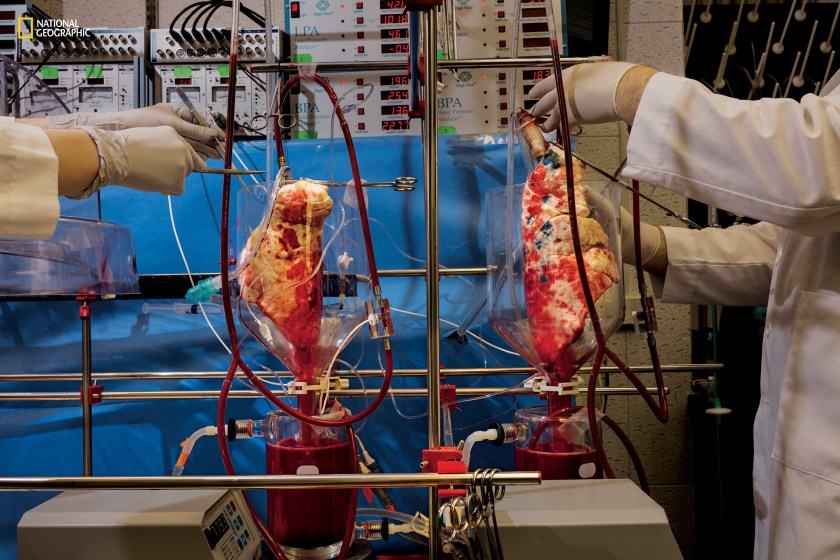 Human blood filters through pig lungs in the lab of Lars Burdorf at the University of Maryland School of Medicine. Thousands of people die every year for lack of transplantable human organs. Scientists are experimenting with CRISPR to rid pig organs of viruses that harm humans. Pig organs have already been successfully transplanted into primates. (Greg Girard/National Geographic)
Greg Girard 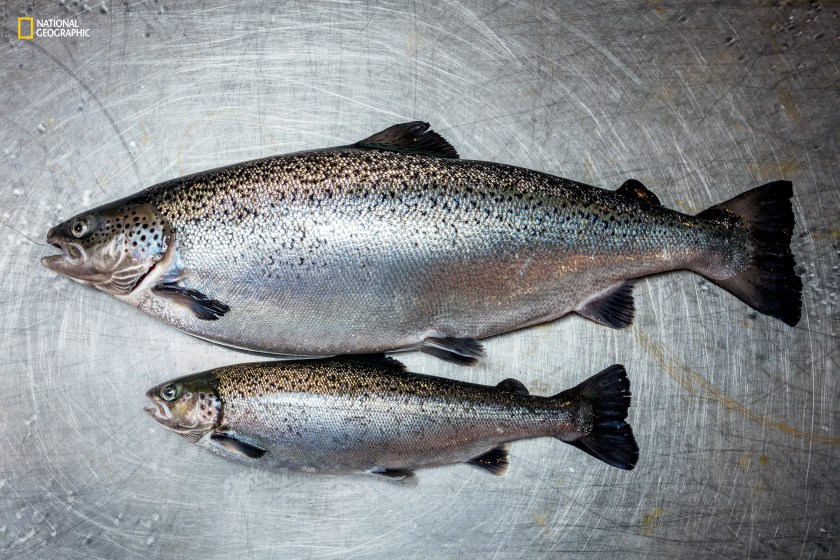 Scientists used conventional genetic engineering to add genetic material from two other sh species to create the AquAdvantage Atlantic salmon (top), which can reach market size twice as fast as its natural counterpart. The sh consumes less feed and can be raised in isolation close to cities, reducing transportation costs and emissions, and eliminating any chance of escape into the wild. While the FDA has approved the sh as entirely safe for consumption, doubts over the safety of transgenic foods persist. In the future, CRISPR-engineered foods, which do not combine genes from different organisms, might find quicker acceptance. (Greg Girard/National Geographic)
Greg Girard 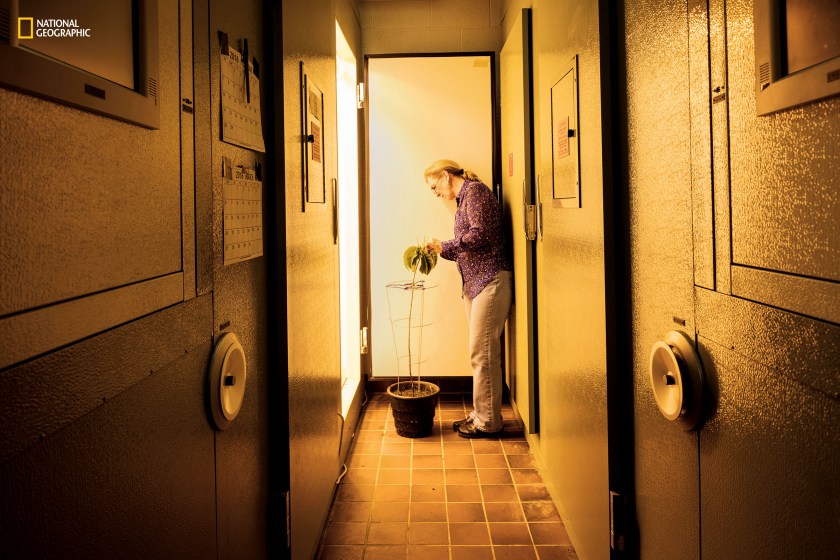 William William Powell of the State University of New York College of Environmental Science and Forestry and colleagues (including Kristen Stewart, right, tending a transgenic plant) have used a wheat gene to develop a blight-resistant chestnut. It may one day repopulate the eastern forest. (Greg Girard/National Geographic)
The August Issue of National Geographic Magazine (National Geographic)