What looks like lightning arcing through an ominous cloud is actually a dry landscape of rocky buttes in southern Utah and northeastern Arizona. River channels flow north from Arizona into the San Juan River. The light vertical feature at the top of the image is referred to as Comb Ridge, a jagged fold in the Earth's crust called a monocline. (USGS/NASA)
By Matthew Reitman

Our planet is home to many natural wonders, which we frequently feature on our site. Yet, this organic beauty is normally captured in photos taken from the perspective we all share. These sights become entirely unfamiliar when documented from a vantage point that few ever have: space. Satellites get the best view when it comes to Mother Nature. Launched into orbit in 2013, Landsat 8, a US observation satellite, captures 700 images a day using its two cameras, the Operational Land Imager (OLI) and the Thermal InfraRed Sensor (TIRS).

Below, are a collection of 20 photos taken by Landsat 8. Without context, they may be mistaken for abstract or impressionist art. With context, the photos become even more breathtaking as the scale of Earth’s natural wonders is revealed. 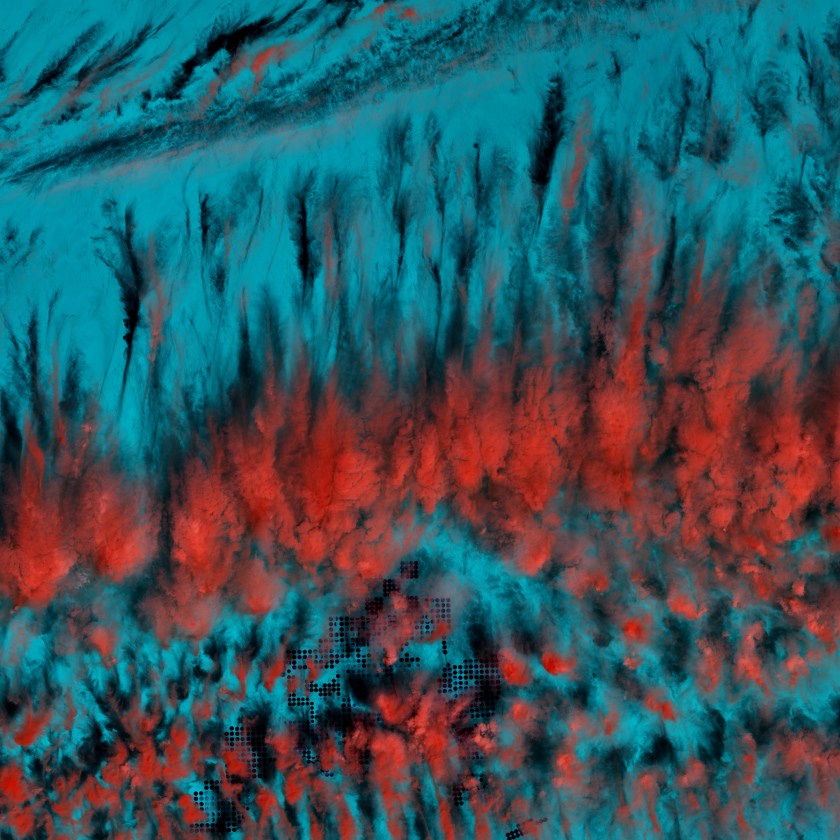 These cloud patterns cast eerie shadows on the landscape of southern Egypt. The clouds appear red and the desert below hazy blue in this infrared rendition. (USGS/NASA) 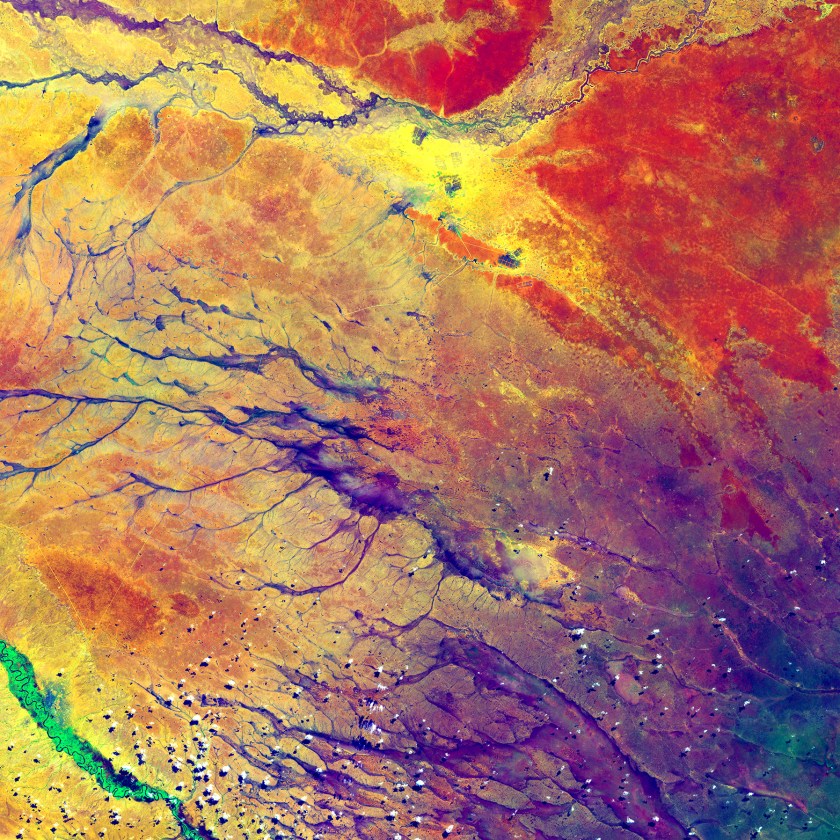 The deep purple in the lower right spreads out into a few channels before fading into a multitude of colors. These channels are remnants of an ancient drainage network in Kenya. The beauty of the colors actually hides a stark reality for hundreds of thousands of people. The dark spots at the top center of the image are refugee camps (USGS/NASA) 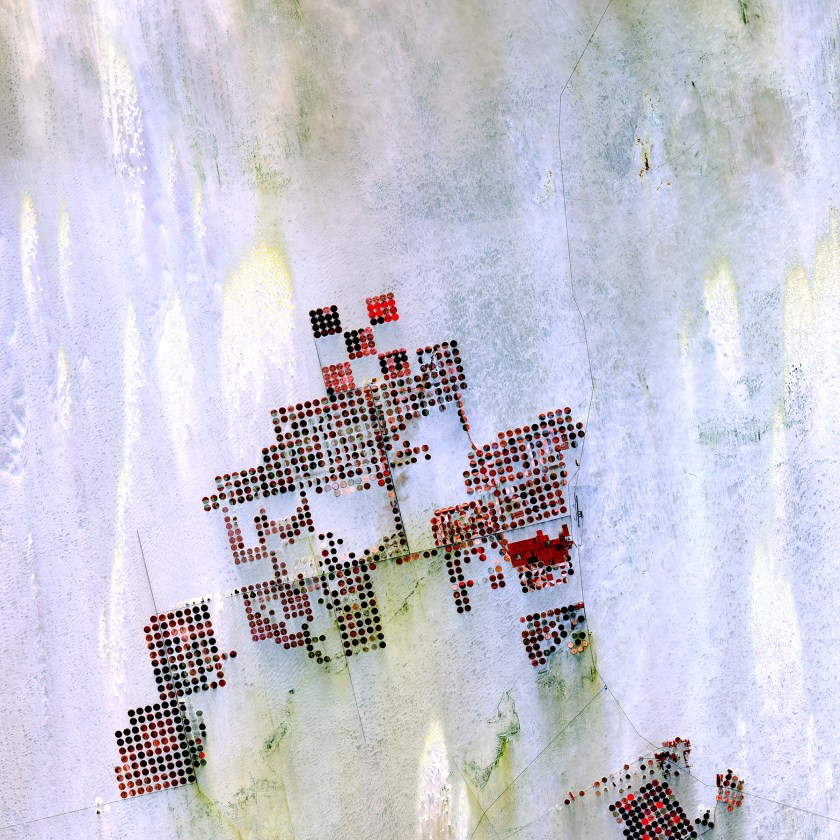 Geometric shapes lie across the emptiness of the Sahara Desert in southern Egypt. Each point is a center pivot irrigation field a little less than 1 kilometer (0.6 mile) across. With no surface water in this region, wells pump underground water to rotating sprinklers from the huge Nubian Sandstone aquifer, which lies underneath the desert. (USGS/NASA) 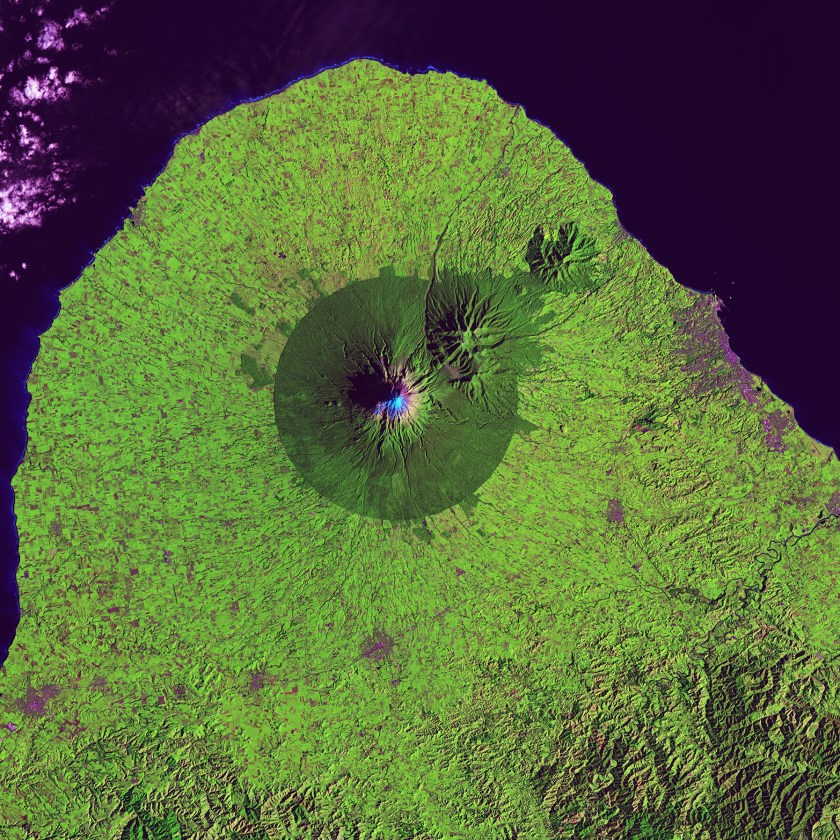 A nearly perfect circle of forest delineates the boundary of Egmont National Park in New Zealand. Snow-capped Mount Taranaki marks the center of the park, which is surrounded by green farmland. (USGS/NASA) 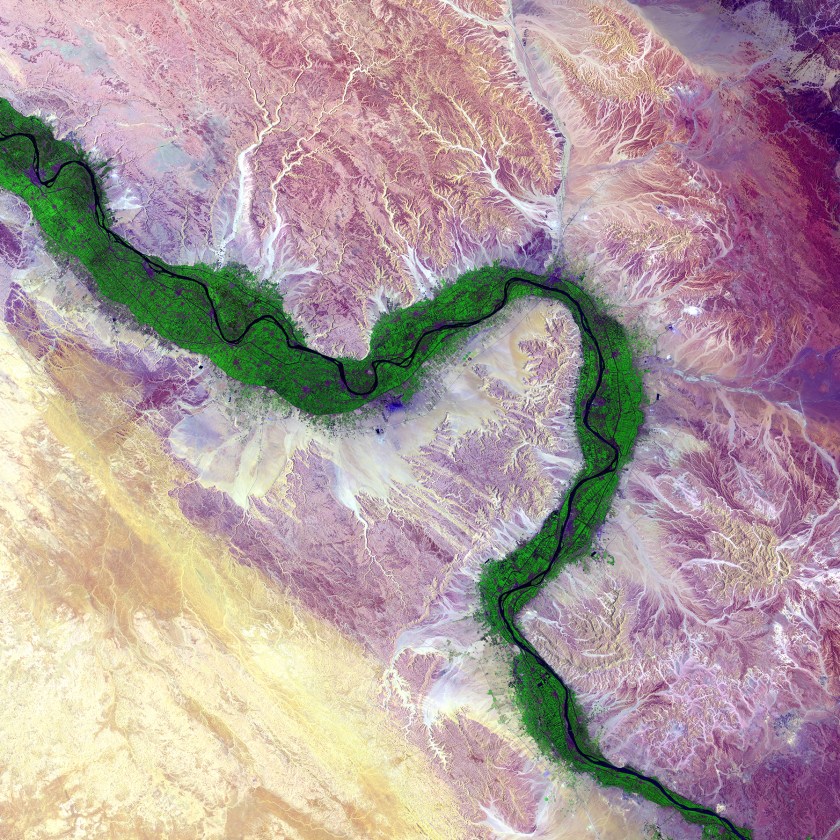 It is easy to see from this image why people have been drawn to the Nile River in Egypt for thousands of years. Green farmland marks a distinct boundary between the Nile floodplain and the surrounding harsh desert. (USGS/NASA) 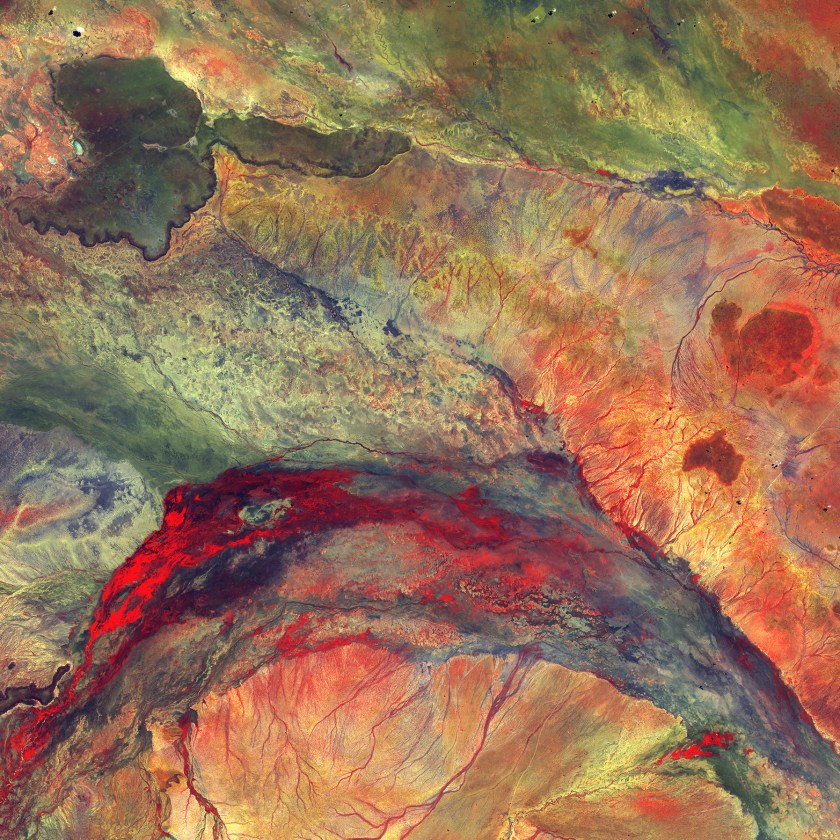 Water flowing out of this inland delta rarely reaches the ocean; instead, it seeps into the semiarid plains of northeastern Kenya. The dark feature in the upper left, which looks like a black eye, is hard basaltic rock from an ancient lava flow. (USGS/NASA) 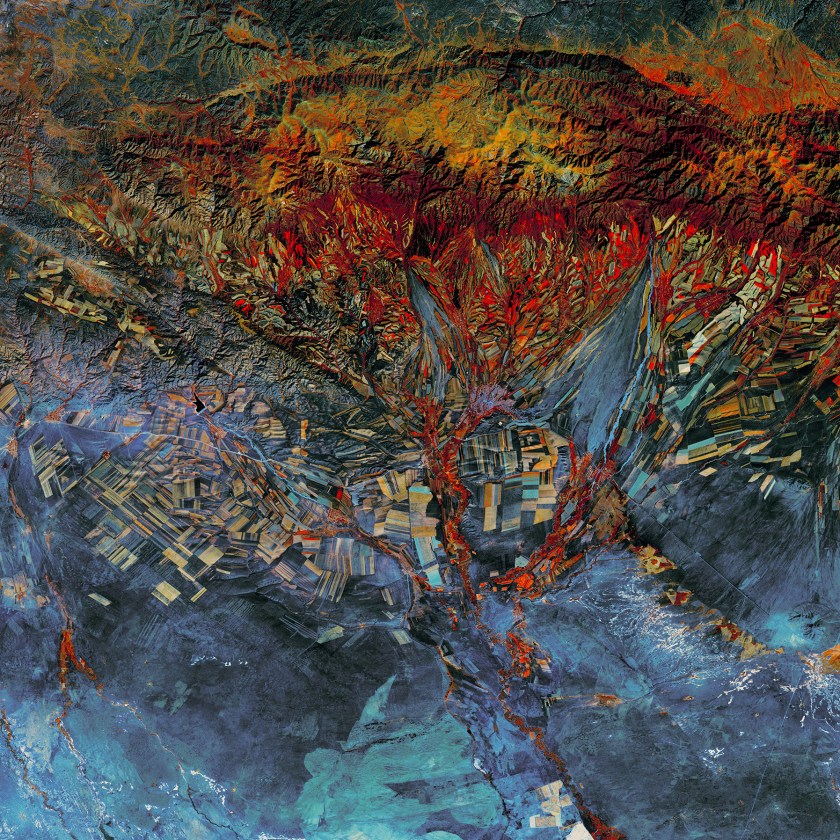 Startling red patches sprout from an agricultural landscape that looks almost like a Cubist painting. The fields in this part of eastern Kazakhstan follow the contours of the land—long and narrow in mountain valleys, and large and rectangular over the plains. (USGS/NASA) 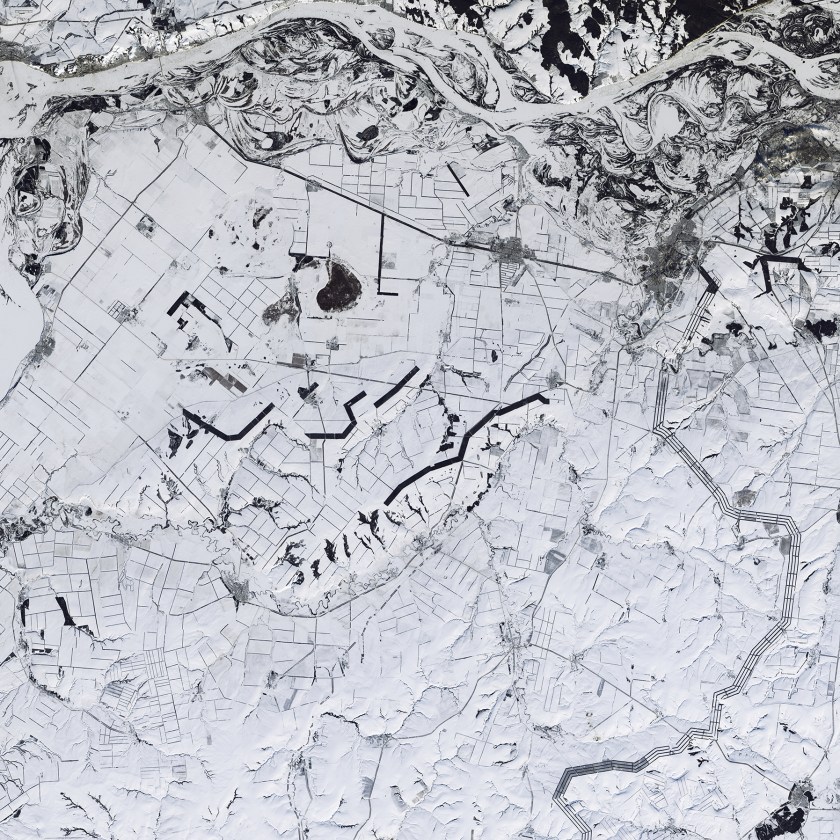 Is this a black-and-white image? No, this is a natural color image of snow-covered southwestern Russia. Windbreaks, roads, and fence lines look like random pencil marks near the Volga River, which flows across the top of the image. The thick lines are trees planted to protect fields from dry wind and erosion; these windbreaks retain snow, allowing more moisture to penetrate into the soil. (USGS/NASA) 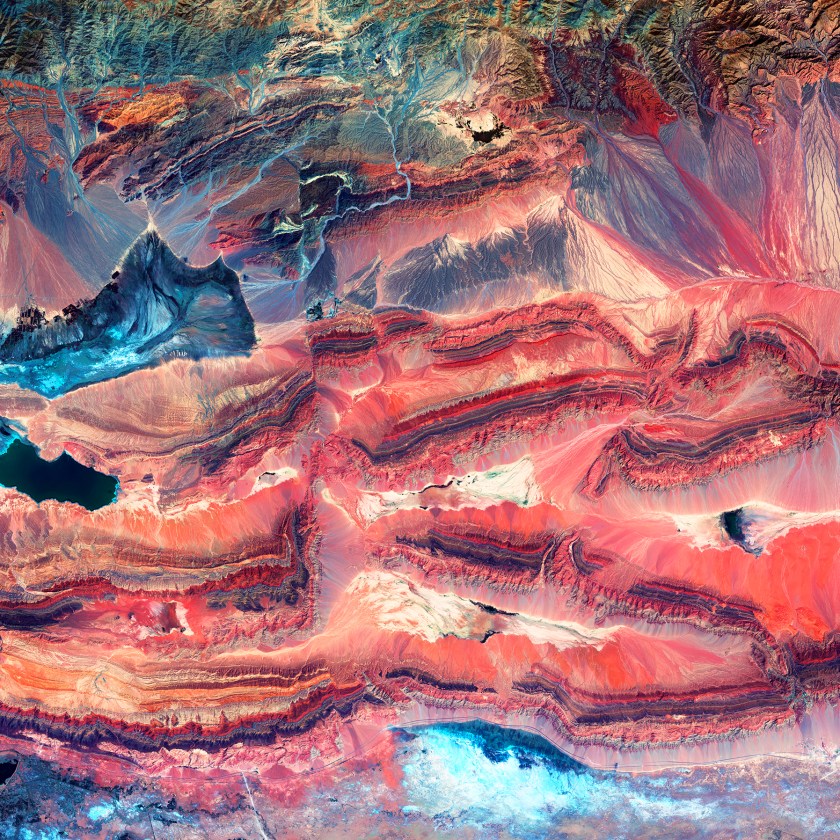 When landmasses collide, rock layers can break. Geologists call these breaks “faults.” Rock layers are offset in this image in western China, making the faults remarkably clear. The different colors indicate rocks that formed at different times and in different environments.(USGS/NASA) 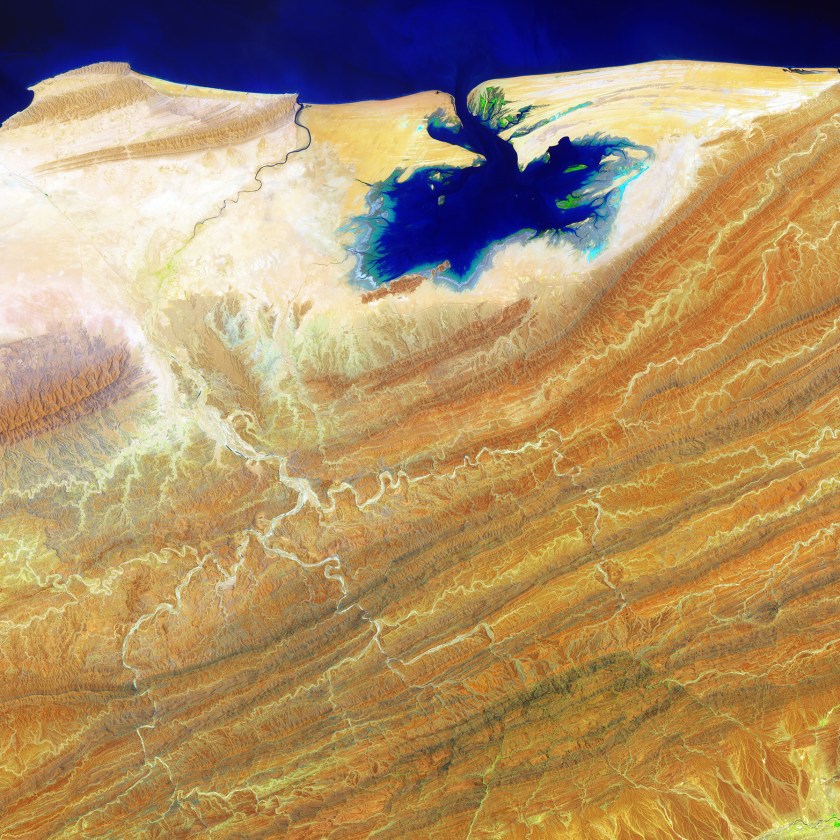 Like blue ink bleeding onto parchment, the Khor Kalmat lagoon branches off the Arabian Sea and spills into the southern Pakistan landscape near the Makran Coast Range. Mudflats cover almost the entire lagoon, which fills with shallow water at high tides. The small areas of green are isolated pockets of mangrove forest. (USGS/NASA) 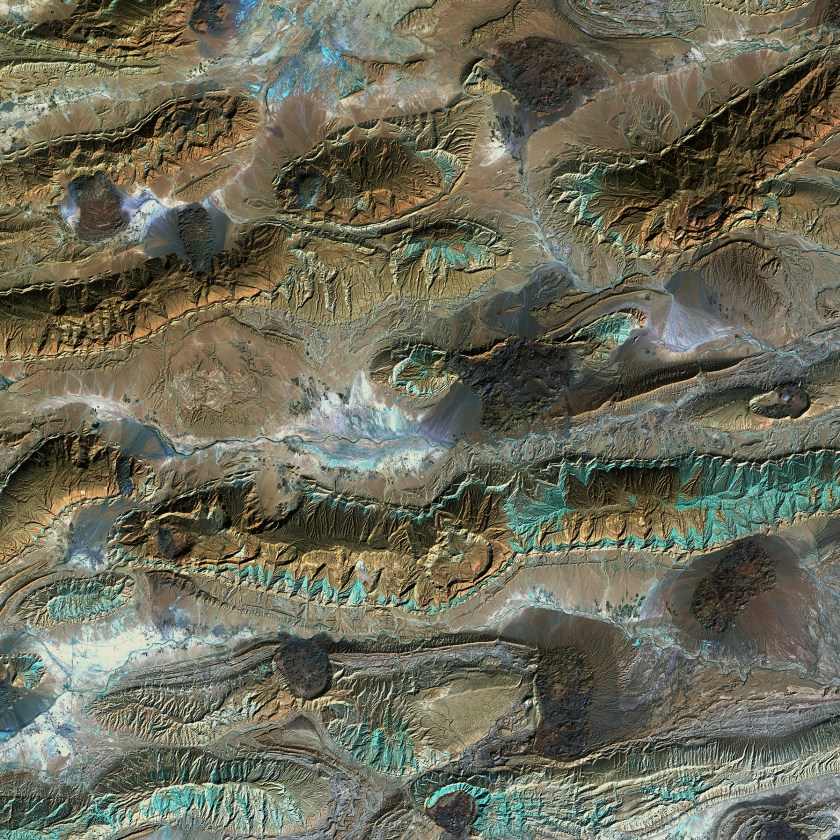 The patterns and colors in the Zagros Mountains of Iran are interesting enough. For example, the infrared view provides a patina-like outline to the mountains. But something more happened to this unique landscape. Interrupting the mountain patterns are irregular dark patches called salt glaciers. What began as salt domes buried under the rock pushed up through the Earth, squeezing to the surface like toothpaste. (USGS/NASA) 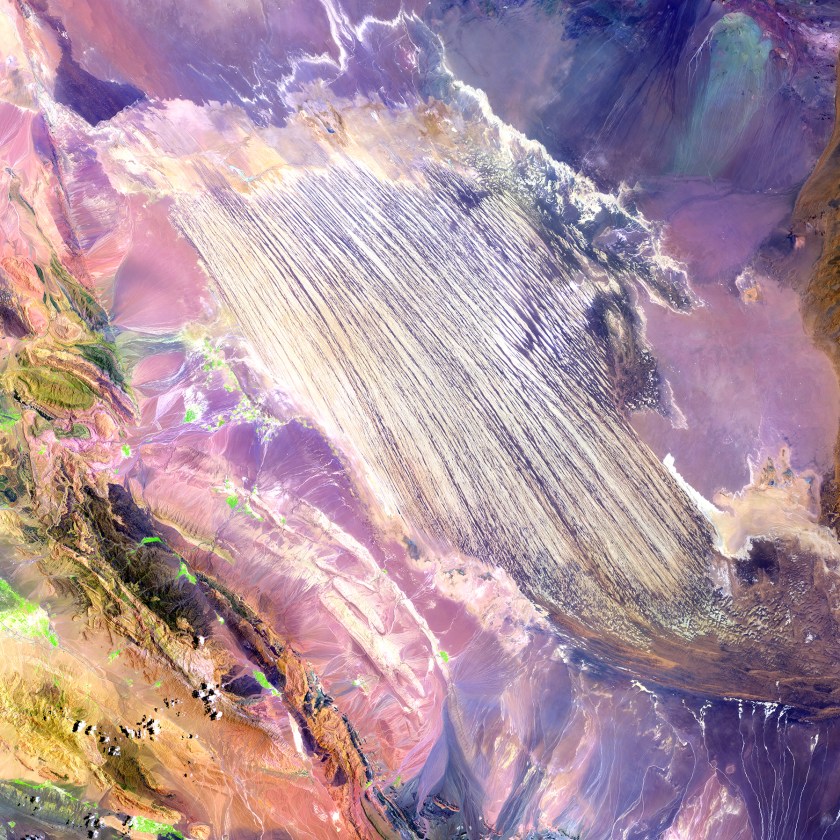 A bold paint stroke on a busy purple canvas is actually part of the Dasht-e Lut Desert in southeastern Iran. The linear features are kaluts, huge rocky formations shaped by wind erosion. The streamlined forms vary in size, but some kaluts stretch more than 100 kilometers (62 miles). (USGS/NASA) 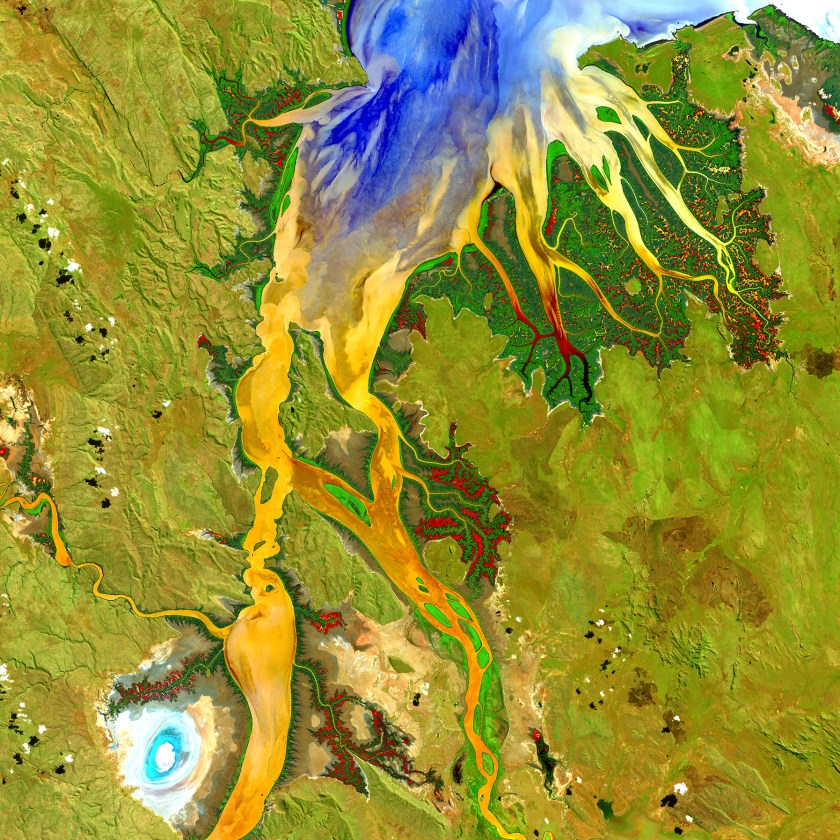 The biologically complex conditions of mangroves are shown in dark green along the fingers of the Ord River in Australia. Yellow, orange, and blue represent the impressive flow patterns of sediment and nutrients in this tropical estuary. The bright spot at the lower left is an area of mudflats, which is home to saltwater crocodiles. (USGS/NASA) 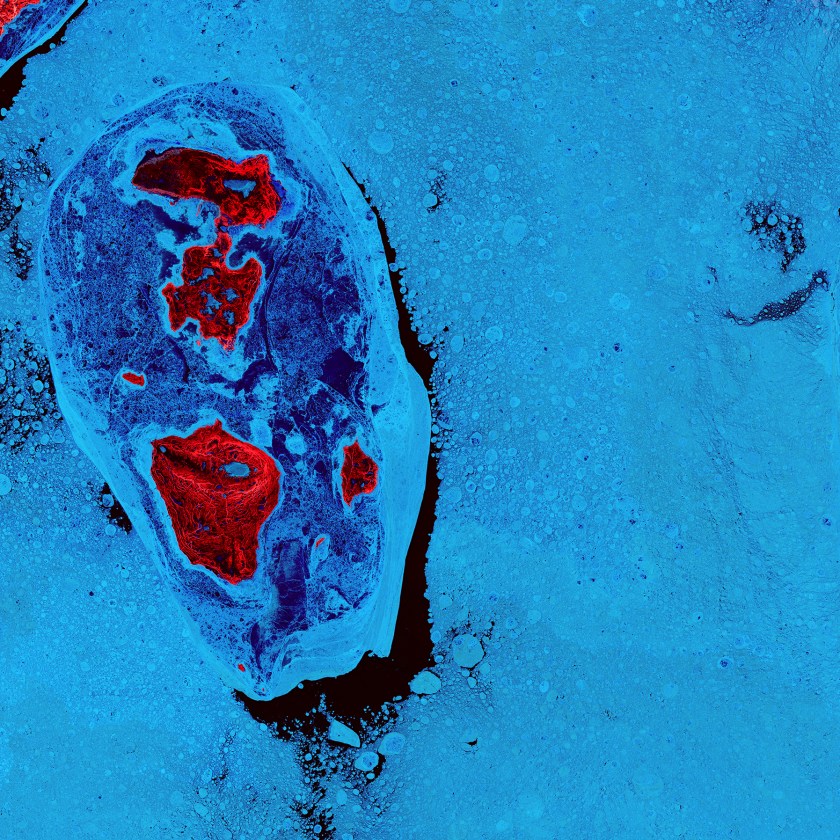 The ice surrounding the northern Canadian Spicer Islands, shown in bright red, resembles a cell, complete with ribosomes, mitochondria, and a nucleus. Even though the image was captured shortly after the first day of summer in the Northern Hemisphere, the islands are locked in ice. (USGS/NASA) 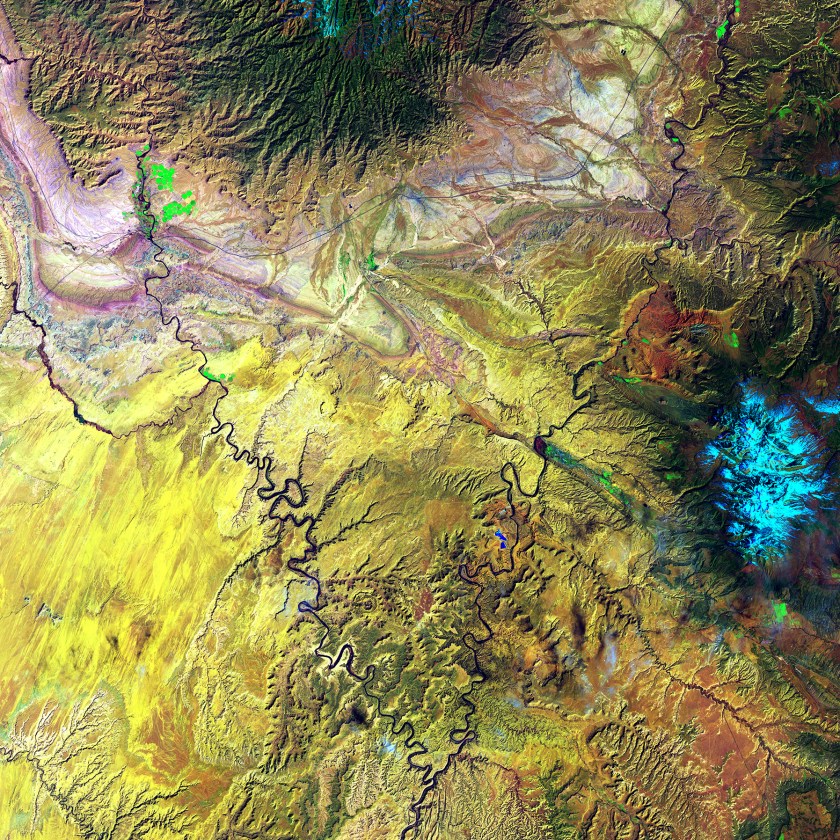 The Green River and the Colorado River meet within Canyonlands National Park in Utah. Snow-covered Mount Waas, shown in light blue on the right side of the image, overlooks the arches, canyons, and bizarre rock formations that prevail throughout this region. (USGS/NASA) 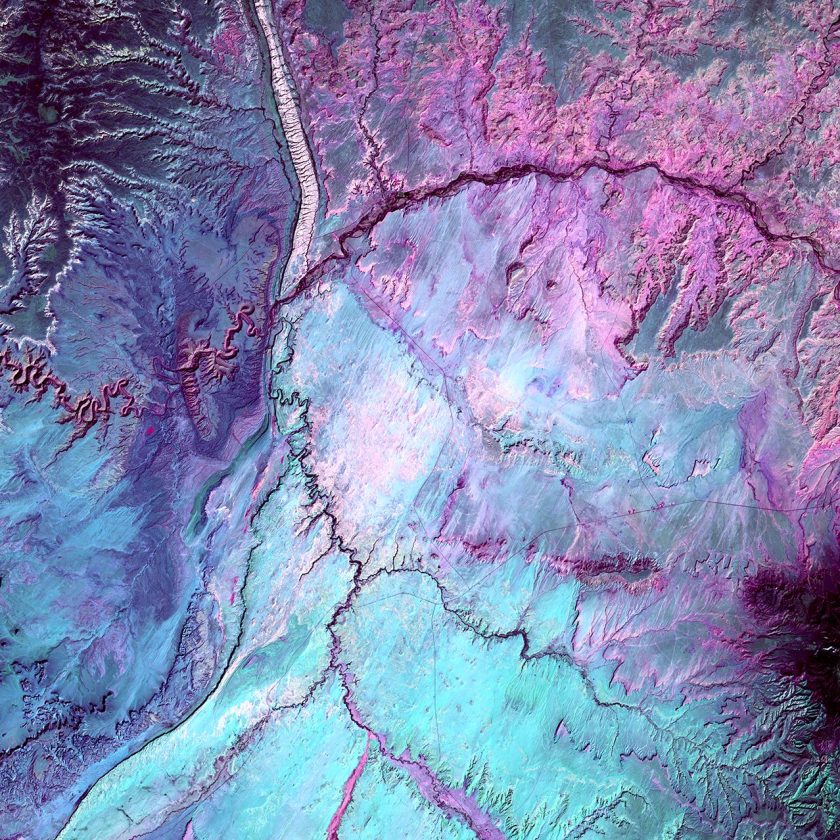 What looks like lightning arcing through an ominous cloud is actually a dry landscape of rocky buttes in southern Utah and northeastern Arizona. River channels flow north from Arizona into the San Juan River. The light vertical feature at the top of the image is referred to as Comb Ridge, a jagged fold in the Earth’s crust called a monocline. (USGS/NASA) 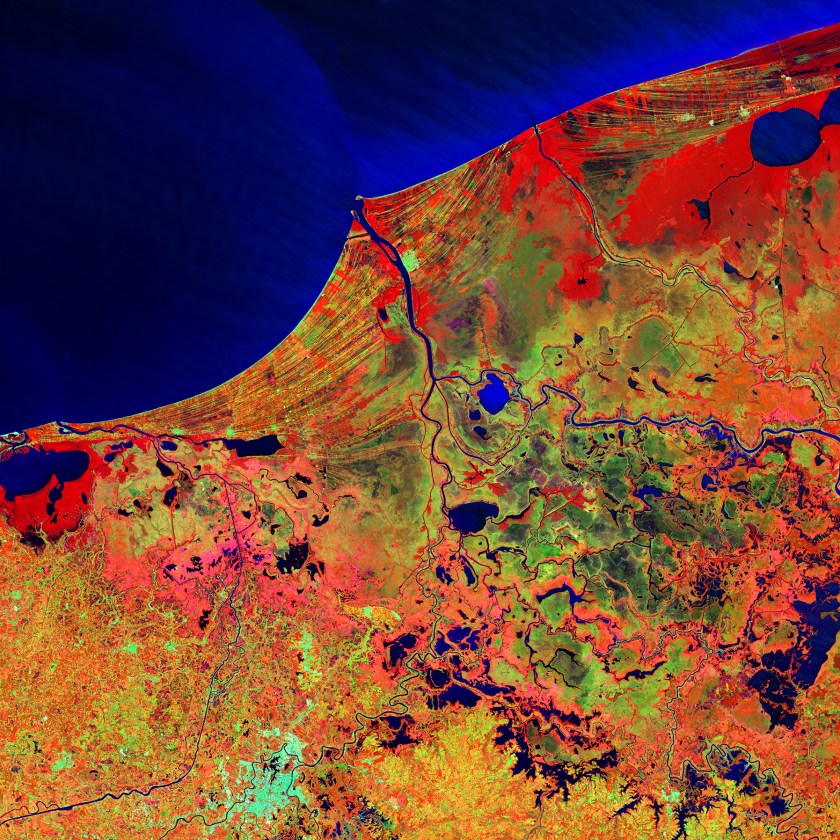 Much of this image consists of the Reserva de la Biosfera Pantanos de Centla, a biosphere reserve in southern Mexico that protects wetlands in the area. The water bodies, mangroves, and forests are a sanctuary for a great variety of wildlife. Sediment carried away by the Grijalva River appears as a sweeping light blue brushstroke flowing into the Gulf of Mexico at the top of the image. (USGS/NASA) 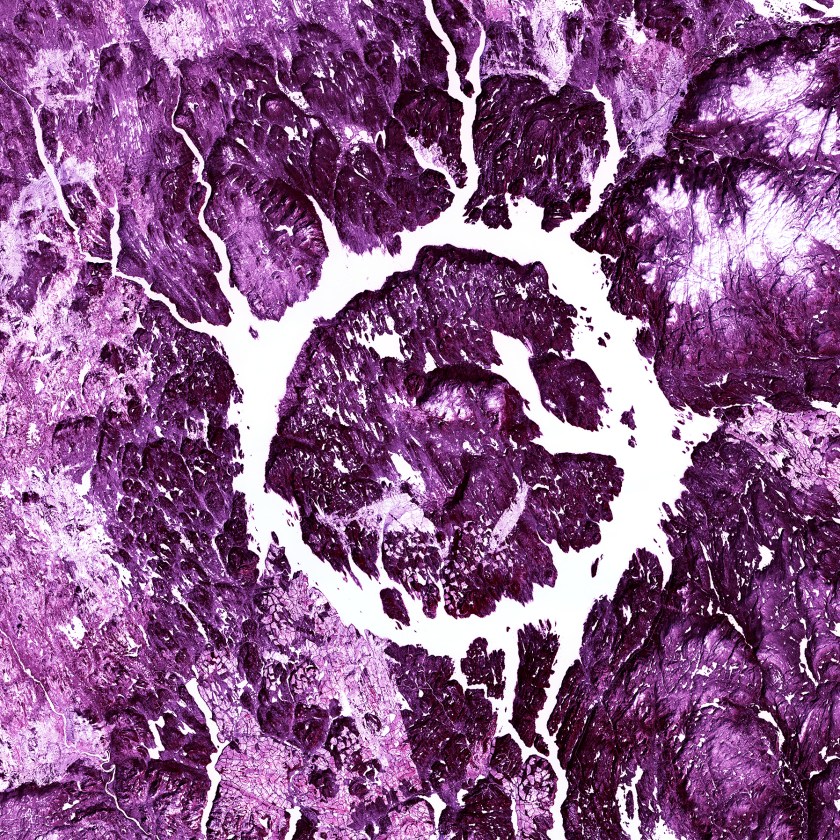 Lake Manicouagan, Canada, is one of the Earth’s largest and oldest known impact craters. The crater is 65 kilometers (40 miles) wide and is estimated to be about 214 million years old. The lake and island are clearly seen from space and are sometimes called the “Eye of Quebec.” (USGS/NASA) 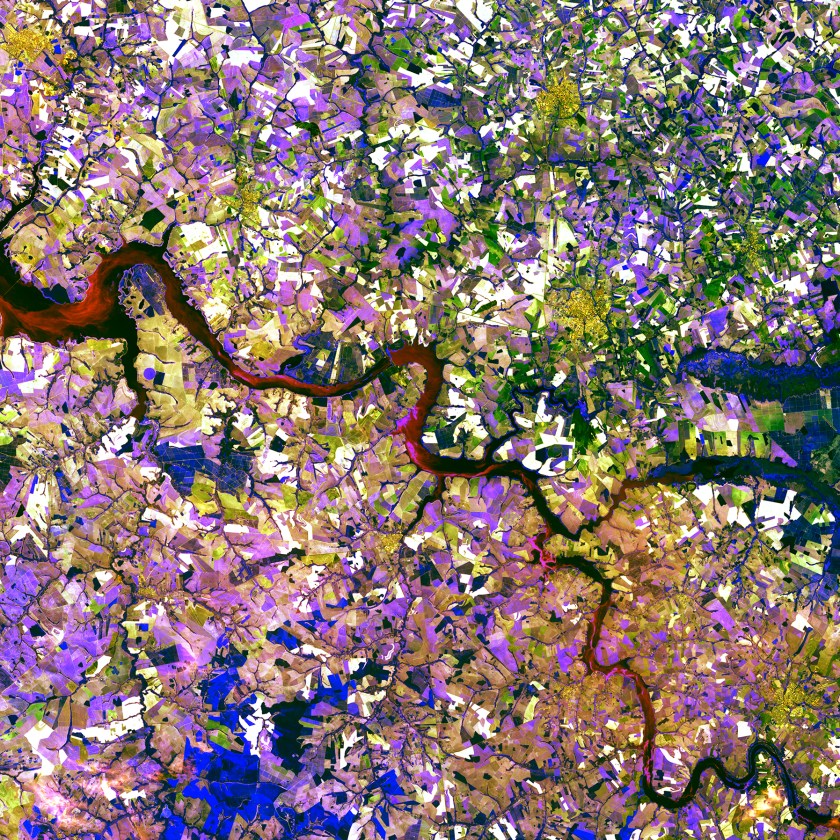 The Tietê River snakes across this tessera mosaic of multicolored shapes near Ibitinga, Brazil. Fields of sugarcane, peanuts, and corn vary in their stages of development. Lavender, purple, and bright blue indicate actively growing crops. Light yellow or white indicate little or no vegetation growth. The splotches of dark mustard yellow are urban areas. (USGS/NASA) 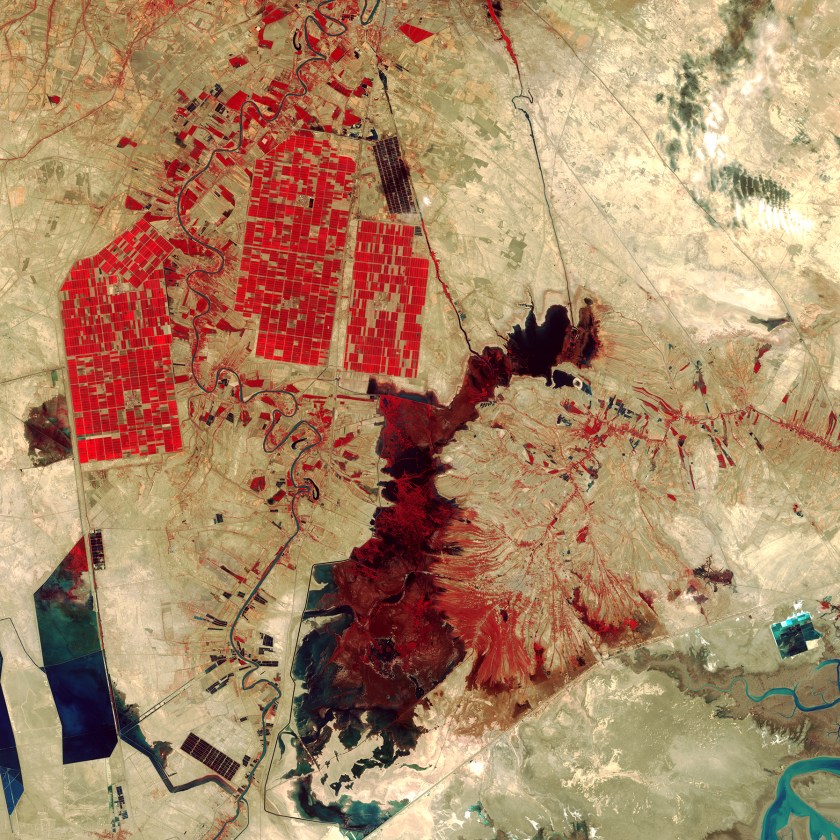 What appear to be smatterings of paint on a wall represent an amalgam of human-made and natural features in southwestern Iran. The dark red shape in the center of the image is Shadegan Pond, which is the northern part of the larger Shadegan Wetlands. Red areas depict actively growing vegetation, and the rectangular shapes in the upper left reveal irrigated farmland.(USGS/NASA)