When Did Having a Crush Get So Morbid? 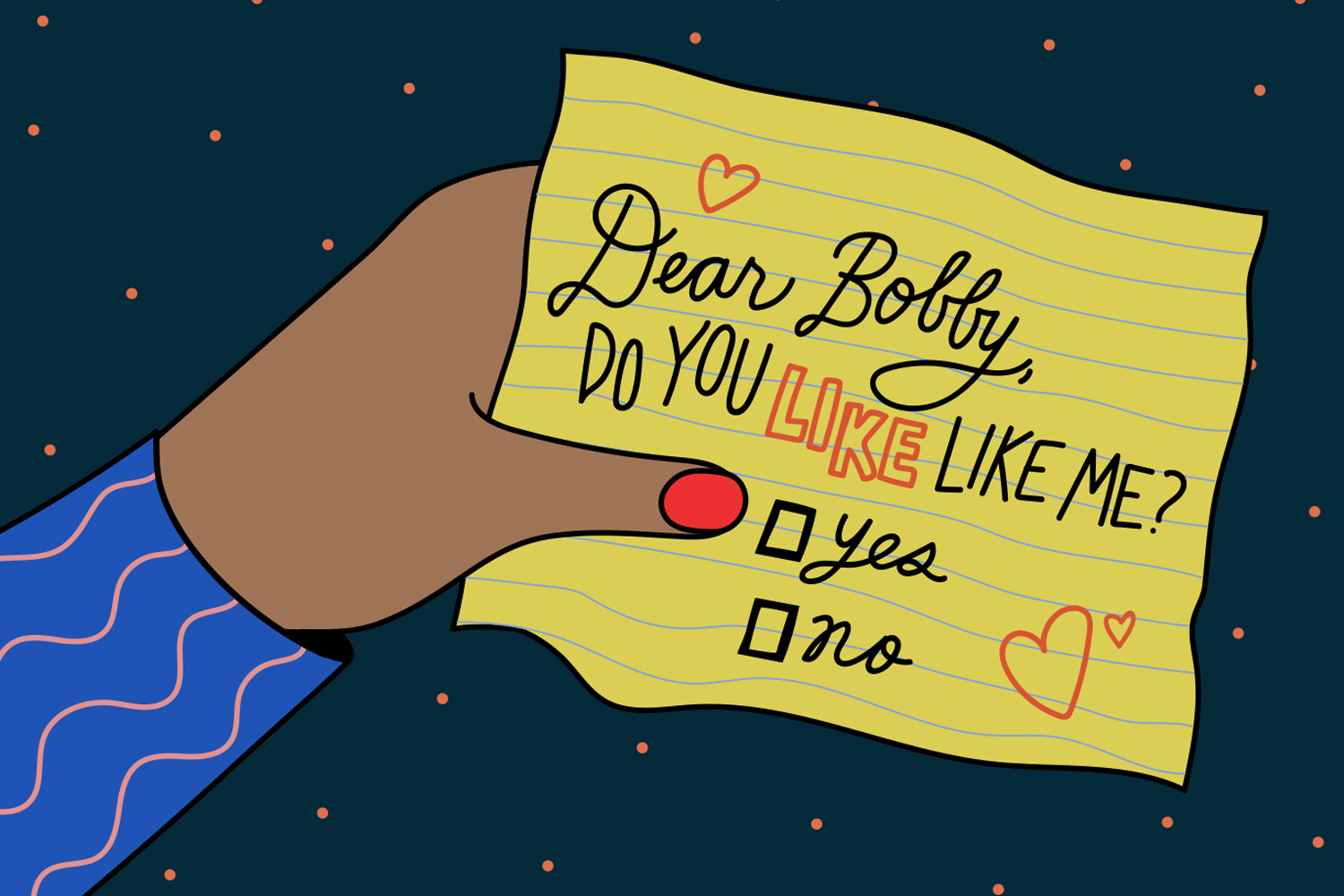 Like your middle school crush, but dark and kind of sad for some reason.
Rinee Shah for InsideHook
By Kayla Kibbe / February 14, 2020 9:33 am

In middle school we wanted our crushes to like us back. Now we just want them to destroy us.

“I pretend you are worth having a crush on cuz I need the pain,” is a sentence that appeared on the internet in 2013, and what reads like the angsty rumination of a quintessentially troubled teen is actually a tweet from the poet and writer Melissa Broder, who was in her 30s when she started the once-anonymous Twitter account @sosadtoday back in 2012.

As the account has ballooned in followers and influence over the years, Broder continues to share thoughts on the relationship between crushes and death. Sometimes not having a crush is going to kill her, but other times having one is going to keep her alive only to kill her later. Sometimes the crushes aren’t responsible for the killing or the saving themselves but instead merely serve as distractions from mortality — “need a new crush to distract me from the old crush that distracted me from death” — or sometimes simply from the gaping void at the center of everyday existence — “that which does not kill you makes you numb out with crushes on inappropriate people.”

While Broder’s flair for casual nihilism veiled in pithy internet speak has often earned the writer labels like “forever teen,” her morbid approach to an otherwise stereotypically fluffy state of adolescent infatuation has actually become a hallmark of increasingly frequent conversations about crushes taking place among full-grown adults.

All over the internet people are talking about crushes. And while not all talk of crushes is as blatantly morbid as Broder’s, much of it contains at least a sliver of dark irony characteristic of a fairly prominent brand of Twitter. Back in December, comedian Ginny Hogan tweeted, “I have a crush on a guy I’ve never met, but, to be fair, that’s the best type of guy,” while GQ columnist Sophia Benoit, a frequent contributor to the ongoing crush discourse, once tweeted, “Thank you for asking yes I do hate everyone I have a crush on.”

Perhaps noticing this growing ubiquity of crush talk on social media, comedian Dana Donnelly recently called attention to the word itself, tweeting, “Ok the word ‘crush’ sounds so cute and casual but actually having one is basically a full time job that often results in a full on mental breakdown??”

Donnelly raises a good point. Traditionally, “crushes” have been thought of as inherently trivial flights of adolescent fancy. So when did a form of youthful infatuation once reserved for middle-school daydreams and teenage fangirls turn into an expression of postmodern despair? When did having a crush get so dark?

On the Origin of Crushes

To be fair, there’s always been certain violent implications underlying our talk of crushes. In other contexts, after all, to crush is “to squeeze or force by pressure so as to alter or destroy,” or, at other times, “to cause overwhelming emotional pain to.”

While the etymology is unclear, as slang etymology often is, it’s unlikely the romantic sense of the term is entirely unrelated to its traditional meaning. Green’s Slang Dictionary suggests the implication at play in our use of romantic “crush” is that “one’s emotions ‘crush’ their object.”

“It is indeed speculation,” slang lexicographer Jonathon Green tells InsideHook, though not, he hopes, “without an underlying logic.”

While our use of the romantic crush has changed little since its first known recording in 1884 — in the journal of an Isabella Maud Rittenhouse, who remarked that “Wintie is weeping because her crush is gone”  — it would seem that in recent years we’ve increasingly latched onto the underlying metaphor of destruction to which Green alludes. Today, however, it is no longer the object of our affections we’re crushing under the weight of our emotions, but ourselves.

This subtext is often rendered literal in modern expressions of romantic infatuation. As Gabriella Paiella wrote for the Cut last year, a curious trend has emerged on the internet in recent years in which lovestruck stans express a desire for their celebrity crushes to cause them bodily harm. While the particular forms of desired physical assault vary — from Timothée Chalamet fans who want to be run over by the actor’s car to Swifties who want the pop star to throw them in a woodchipper — the common theme, as Paiella noted, is an expression of “a catastrophic level of desire.”

This obsession with romantic catastrophe reflects what has come to be seen as a distinctly millennial brand of casual morbidity. Millennials are hailed as the “death positive generation.” Advertisers attempt to capitalize on our willful embrace of death by slaying company mascots in ad campaigns.

There is a similar absurdity in the simultaneously dismissive yet fatalistic way we talk about crushes today. We mock the idea of “catching feels” but are willing to let them destroy us utterly if we do.

The Way We Crush Now

When we talk about crushes today, we often seem to be talking less about the actual object of our affections than the affections themselves. These conversations don’t typically center on the details of our crushes — his dreamy eyes and boyish charm — but rather focus on the state of having a crush itself. People aren’t flocking to Twitter to talk about their crush; they’re flocking to Twitter to talk about the fact that they have a crush and what that means for their own existential state.

As Broder put it in a 2018 tweet from her personal Twitter account, “this too shall pass and come back as a crush on someone that’s more about my psychological projection than the actual person.”

That’s the beauty of crushes: unlike real partners in equal romantic relationships, we are never under any obligation to know or acknowledge our crushes as actual, whole people. Particularly in the age of the internet, in which it is possible to have a crush on someone without ever interacting with them in real life, crushes are raw material we are free to mold to suit our fantasies.

Meanwhile, not only do crushes lend themselves well to becoming whatever fantasy we want them to be, but they also function as useful surfaces on which to project fantasy versions of ourselves.

I am not a person who is generally disposed to frequent bouts of self-love, but I remember once feeling very infatuated with myself on the way home from a second date with a man I was developing a crush on. I took the long way home so as to spend more time basking in the crushy glow of imagining myself through someone else’s eyes — like when you read through your own Twitter profile from the imagined perspective of a new follower and become fascinated by the fantasy of yourself you pretend they’re piecing together through your tweets. When I got home I remember curling up on the couch without removing my dress from the night before, trying to preserve whatever version of myself I had become in his bed that morning — or whatever fantasy I had projected onto myself through his eyes.

While writer Brandy Jensen told Paiella that “the ideal resolution of a crush is to be completely obliterated by it and suffer no longer under the terrible demands of desire,” I think our longing to be destroyed by a crush is as much about preservation as it is freedom. We want our crushes to destroy us so that they can remain crushes forever, so that we never have to watch them fade away or reject us or, worse yet, mature into more stable, monotonous forms of romantic engagement with actual people instead of blank slates that mirror back our own fantasies.

In a way, crushes — by nature unrequited, or at least potentially unrequited — mirror the nihilistic mood of the world today. To have a crush is to open oneself up to heartbreak. It is a willful embrace of futility, not unlike the one implicit in continuing to exist in the world in its current pre-apocalyptic state.

Crushes, as Broder once tweeted, “are little treadmills of hope in the abyss.” It’s probably a false hope — after all, as Broder herself asks, “why wld u bother having a crush on someone if it didn’t destroy yr life” — but I think there is a certain power in that kind of willful vulnerability. I like to believe there is, anyway.