What the White House Correspondents’ Dinner Was Like Without Trump

Host Hasan Minhaj of Comedy Central's 'The Daily Show' brought the laughs, but there was serious message about First Amendment.

Though he didn’t attend this year’s White House Correspondents’ Dinner, President Trump’s presence was still palpable in the expansive ballroom of the Washington Hilton Saturday evening.

A red carpet usually adorned with Hollywood glitz barely turned heads as black tie-clad members of the media swept out of the sweltering D.C. heat and into the cool basement ballroom to honor—as the president of the White House Correspondents Association reminded the room—good journalism.

“We are here to celebrate the press, not the presidency,” WHCA president Jeff Mason said. “The White House Correspondents’ Association works every day to stand up for press freedom and advocate for journalist’s ability to do their jobs…President Trump’s White House is no different.”

But in the absence of the usual joke-filled speech from the commander-in-chief, a chance for presidents from either party to defuse tensions with the press, the dinner itself was different. Having announced in February that he would skip the prestigious gathering — attended in the past by the likes of Academy Award-winning actors and major league athletes — President Trump instead appeared at a campaign-style rally he organized in Harrisburg, Pennsylvania, to celebrate his first 100 days in office. He spent much of his hour-long speech disparaging the media, calling them a “disgrace” and specifically calling MSNBC and CNN “fake news.” 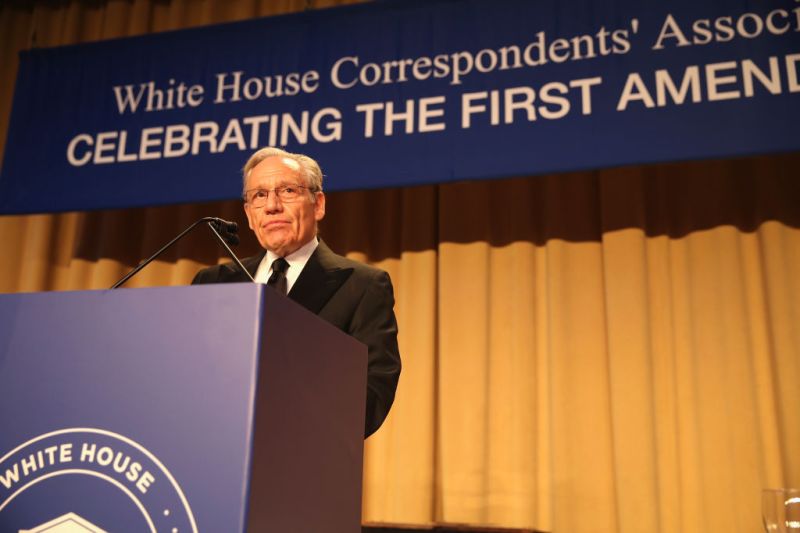 “A large group of Hollywood actors and Washington media are consoling each other in a hotel ballroom in our nation’s capital right now,” Trump told the crowd. “And I could not possibly be more thrilled than to be more than 100 miles away from Washington’s swamp, spending my evening with all of you and with a much, much larger crowd and much better people, right?”

Back in Washington, Bob Woodward, The Washington Post reporter who broke the Watergate scandal, took to the stage to send a message directly to the president and to the journalists in the sold-out ballroom about the value of the First Amendment and free speech. “Like politicians and presidents sometimes, perhaps too frequently, we make mistakes and go too far,”  Woodward said. “When that happens we should own up to it. But the effort today to get this best obtainable version of the truth is largely made in good faith. Mr. President, the media is not ‘fake news.’”

Much of the evening was devoted to championing free speech—attendees sat down to blue “First Amendment” pins on their plates, and were encouraged to don them on their clothing. The chatter grew to consensus, however,  that the air was more relaxed than in years past, as party-goers observed lower security and the lack of a high-energy hum with the absence of the president and his aides.

But one element the evening that wasn’t missing was entertainment. Host Hasan Minhaj of Comedy Central’s The Daily Show took to the stage to shoot barbs at President Trump and the press, even though he was specifically asked by the WHCA to avoid criticizing the administration.

“The leader of our country is not here. That’s because he lives in Moscow, it’s a very long flight,” Minhaj cracked. Later, he turned to CNN: “I’m not gonna call you fake news, but everything isn’t breaking news…every time a story breaks, you go to nine screens…it’s giving me anxiety.”

As the dinner concluded, guests who have attended in year’s past noted the difference in the evening’s tone. Stacey Deziel, a guest of The Daily Beast who has been to multiple dinners throughout the years, told RealClearLife that this year’s event was much more of an industry awards dinner, rather than a celebrity-laden people-worthy event.

“I think it was a powerful tonic. I think [journalists] needed to have that solidarity and comrades and reinforcement of what they do because it’s really important to the republic,” Deziel said.

Marc Adelman, a bicoastal media strategist who has attended ten of the dinners, agreed that it was important for the press to come together and “let some air” out of the tire.

“I think these moments are important both for the organizations who are here who we are honoring, which is the press, and those of us that support a free press,” Adelman said. “I think it’s good to get everybody in a room and have a laugh, and sort of take a deep breath. I think even with the president not being here, I think that very much gets accomplished in this.”

Adelman went on to say that he thought President Trump might’ve enjoyed himself, had he attended.

“We all have to take our jobs and what our roles are very seriously, but also we can poke some fun at ourselves,” Adelman said. “I think actually President Trump can do that very well, he had some great moments at the Al Smith Dinner in October, where he had some really great lines. And so I think he might’ve actually enjoyed being here.”

Check out the video below to see Minhaj’s full performance.