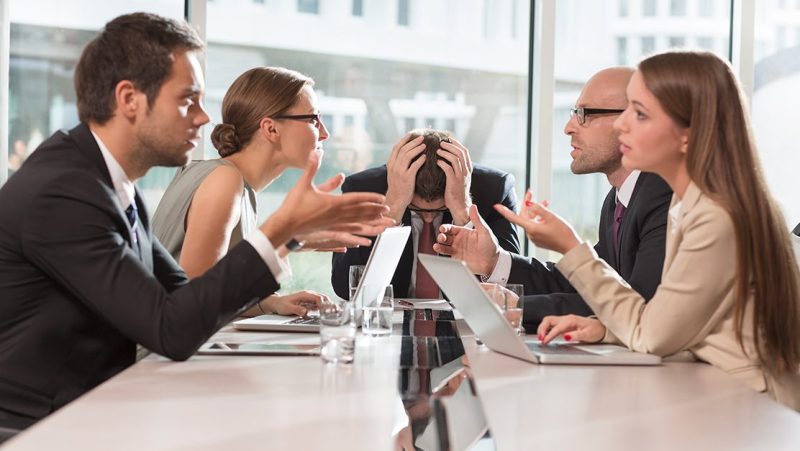 In 2015, Gallup found that full-time employees in America work 47 hours a week on average. When people are in the same space that much, some of them are going to clash at some point. However, office feuds can be resolved quickly if you avoid these three, counterproductive behaviors.

1. Gossip
Allowing rumor and background chatter to build up in the workplace is always a bad idea. Whenever possible, communicate office policy—and any changes to it—clearly, through official channels. Employees want open lines of communication, and will resist leadership if they feel ignored or unheard.

2. Raising Expectations Too High
While you want to employees to know that they’re being heard, you don’t want them thinking that they decide every aspect of company policy. The key is making it clear that employee concerns will be heard, but that they won’t always get their way. And under-promising and over-delivering on any new initiative or policy is key to keeping the peace at work.

3. Not Walking the Walk
When O.C. Tanner executive David Sturt implemented an open-space floor plan at his office, he included himself in it. “Often,” Sturt writes in Fortune, “being a leader means being willing to adopt the changes we’re asking our team members to accept.” Not doing so suggest two different standards apply and erodes employee trust in leadership.

The Next Big Fee in Air Travel? A "Drop-Off Charge" at Airports.

Tom Hanks Built a Perfectly Balanced Car Collection. Now He’s Selling It.
The Next Big Fee in Air Travel? A "Drop-Off Charge" at Airports.
There Will Never Be a Better Year to Visit the Greek Isles
The Latest TikTok Trend Is Making Fun of Greta Van Fleet
How Unlimited Vacation Time Killed the Vacation
The Best "Buy It for Life" Gear We've Ever Owned

The Delicious, Meteoric Rise of the Foodie-Friendly Cocktail Bar
Why Are People Still Buying Stock in Electric Cars That Don't Exist?
Ahmad Rashad Remembers “NBA Inside Stuff” and the Glory of the NBA in the ’90s
The Best Dating Apps for Divorced Men
Land Rover Is Selling a US-Exclusive Defender That Comes With a Very Special Adventure
Shop Classic Polos Up to 50% Off at Lacoste's Semi-Annual Sale
The 20 Best Style Deals From Nordstrom's Massive Anniversary Sale
Save 15% at Design Within Reach's Living Room Sale
These Laid-Back Striped Bahama Shorts Are on Sale

The Best "Buy It for Life" Gear We've Ever Owned
Did Tom Brady Fake His Latest Viral Passing Video?
33 Invaluable Travel Hacks From Experienced Jet-Setters
A Michelin-Starred Chef Shares His Signature Salmon Club Sandwich Recipe
How to Be a Better Hotel Guest, According to People Who Work at Hotels