How to stop worrying and embrace the gray

Before taking off for Rio, Ryan Lochte is turning heads for something most swimmers tend to renounce altogether: his hair.

The 11-time Olympic medalist has gone silver fox with a tint of blue. Blue is the color of water. And what does Lochte do? He swims. Get it?

But here’s the important part: it actually looks … kind of cool. And Twitter seems to agree:

@RyanLochte Should have dyed it gold Good luck Lochte, you got this

The 31-year-old rocking the gray look should be no surprise. Remember: this is the same kid who proudly sported an American flag grill at the 2012 London games.

He joins a whole generation of young guys who are welcoming gray hair, which is good news for men who are actually graying. If there’s one thing you can learn from the young’ns trying to cramp your style, it’s this:

To achieve peak silver fox comeliness, you must first fully embrace it.

Just look at Clooney. Slattery. Bourdain. Cooper. Countless others. As with any style trend — whether it’s a choice or a physiological inevitability — the key is the stop worrying and wear it with confidence.

That said, we think Lochte should’ve opted for a different shade this time around: gold. 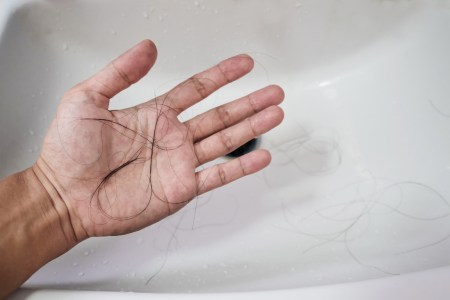