Pipe Dreams: High Times' New Owner Has a Plan. Or Does He? 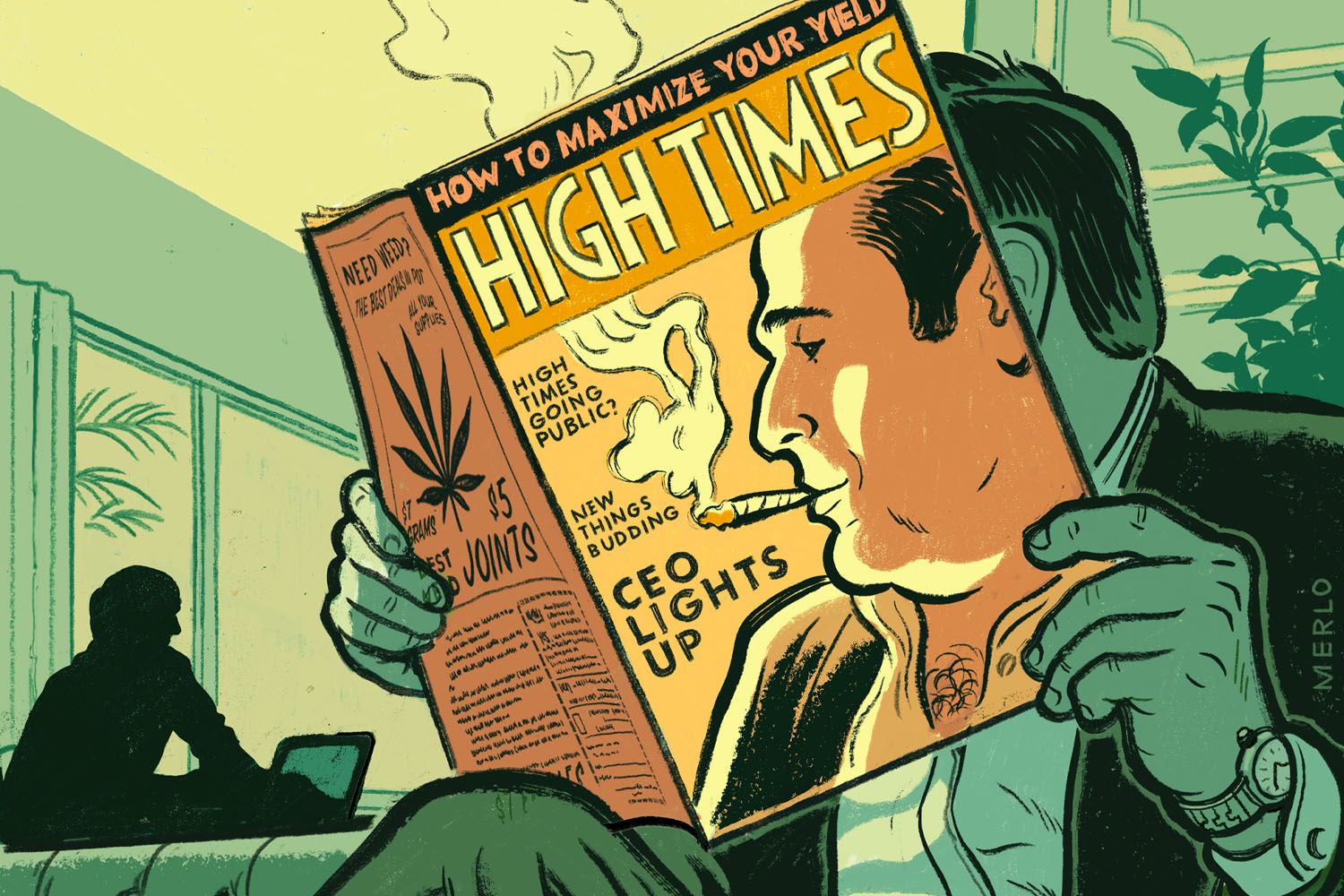 For the last two years, Adam Levin has been trying to turn High Times into a billion-dollar cannabis business
Curt Merlo
By Justin Glawe / December 9, 2019 5:33 am

We are driving around the Ritz Carlton resort in Dorado, Puerto Rico, in a red golf cart that looks like a Humvee, winding through stretches of tropical landscape that are perfectly manicured and lit to remind anyone with enough money to make it past the security gate they are in paradise. In my hand is a joint of what one of the Levin brothers tells me is “the best weed in the world.” I limit myself to a few hits, wary that his boast is accurate and I’ll soon be in the fetal position under a pool chair.

The brothers will indulge in several more of these joints throughout the night, including one as an appetizer before our oceanside dinner of ceviche, pizza and nachos, all in the company of people who look like they have enough money to buy and sell actual human beings. Following another dinner and drinks off the resort, I drop the brothers off at a sprawling, glassy home that backs up to the surf and head to a much more humble hotel a few minutes away.

The next day, I learn that what seemed to me like an impressively gluttonous affair was in reality just another Thursday night. “This stuff is really good, but we get it from these guys who are so cocky about it we don’t even want to admit to them how good their weed is,” says Adam Levin, the current CEO of High Times Holdings and my host. “But of course we get the best weed in the world. We run High Times.”

For the last two years, Adam has been living here with his half-brother, Maxx Abramowitz, among a community of some 500 American expats who have decamped to Puerto Rico to take advantage of favorable tax laws. While the setting is paradise, the brothers are here to work. Their home looks like it was just moved in to: No art on the walls. A spartan living room appointed with naught but a sectional couch, TV and an X-Box. A dining-room table that serves primarily as a dual desk, with a mess of power cords leading to a surge protector powered by a cheap orange extension cord. The two brand new monitors on the table are not plugged in. There’s no time. And besides, the laptop screens work just fine.

Each day, while chained to their computers, Adam and Maxx field a dizzying onslaught of phone calls, texts, emails and deals, always deals. Did they get the money we wired them? Did we get the money they wired us? Money and deals come and go at a rate that even the most red-blooded capitalists on Wall Street don’t always see.

This work goes on constantly, as it has for much of the last two years, during which time Adam has been working to take High Times public. This afternoon brings about at least one promising development, something that Adam said will help prompt enough investor interest to launch High Times as the first publicly traded, all-purpose weed lifestyle brand in America.

While I’m not entirely sure what that means, I know that it is “fucking big,” because Adam tells me so after ending a brief phone call that he made while pacing his backyard, which stands about 40 feet from the teal waters of the Caribbean. It was something about something in Vegas, ambiguous enough that I didn’t fully understand what Adam was saying and couldn’t tell you about even if I did.

While Adam and Maxx are passionate about High Times as a brand and weed as a lifestyle, what drives them is no different than what inspires a lot of people to get out of bed in the morning: the rush of the deal. This Las Vegas thing is a minor one: one of those deals that happens a few times a day and many times a week. But little deals beget big deals, and big deals beget even bigger ones. Adam has been doing them for a while now: he now owns Girls Gone Wild, the nearly-dead social networking site Bebo and Pride Media (which owns both OUT and Advocate), among others. But High Times will be the biggest of all if he pulls it off.

We make a gentleman’s bet on the market cap that High Times will hit when it finally goes public. Then, we go out and spend $500 at a restaurant where José Andrés is offering a prix-fixe menu. We skip that, get a table overlooking the ocean and order a seafood platter, approximately five pounds of USDA prime and a dessert that looks like a coconut shell but is made of chocolate.

High Times — the magazine — has been around since 1974, when founder Tom Forcade used literal drug money to fund the first edition. (Forcade made his pre-publishing living flying drugs to the U.S. from locations farther south, perhaps even coasting over the stretch of Puerto Rican beach Levin now calls home.)

The High Times name and font are unmistakable: known “worldwide,” as Maxx frequently. reminds me In head shops and dispensaries from Toledo to Tel Aviv, there is a copy of High Times sitting in a bin, its cover adorned with some complexly crystallized bud or a weed-friendly celebrity exhaling thick plumes of smoke.

In the Forcade era, High Times had a counter-culture bent and worked in tandem with Rolling Stone to not just upset the political establishment, but also to push journalism in new and necessary directions. Then came the 1980s, and cocaine, an era when the magazine pivoted to a misguided — albeit predictable — focus on blow. The ‘90s saw a return to highly focused weed coverage, with a new group of stoner celebrities who regularly graced the cover. (Recall Frances McDormand smiling with a joint in 2003 for a deep cut.) In the 2000s the magazine was run by two dueling factions of the the Forcade family, battles that continued into the 2010s, preventing would-be buyers from scooping up the iconic brand. “It was a challenge” dealing with the two sides, Adam says. “But now we all get along.”

Since then he’s been working to take the company public on the Nasdaq. In the past two years, High Times has raised $20,000,000 from 20,000 retail investors, people Adam calls “true believers”: those who, through nostalgia or a newfound appreciation, are loyal to High Times. But it isn’t the magazine or the websites he’s banking on. Rather, Adam wants to expand High Times’ offerings, especially as a nationwide repeal of cannabis prohibition inches ever closer. He’s already increased the number of High Times events, which can now be found everywhere from Flint, Michigan, to Alaska. “We lost some money on that one,” Adam says with a chuckle. “But everyone had a great time.”

In 2018, Adam and Maxx put on 17 events, up from just a handful before the Oreva takeover. On April Fool’s Day earlier this year, Maxx proposed a Cannabis Cup event in North Korea to Adam as a joke. “Honestly, and it sounds crazy, but that really isn’t a bad idea,” Adam says. “And it would be absolutely hilarious.”

The events are not without their challenges. The state of Michigan changed its rules regarding the open sale of cannabis just weeks before Adam and Maxx were set to host the Flint event. Instead of a cash bar, the event became BYOW — bring your own weed. At events where sales are permitted, Adam says profits soar, so he continues resolutely down the path of turning High Times from a stoner magazine into what everyone in the crowded world of media is clamoring for: a globally recognizable and endlessly marketable brand.

The path to global brand status is an uncertain one. What High Times has going for it, Adam and Maxx tell me, is that it’s been around for so long that even non-smokers know what it is, so it’s essentially already there. All that’s left to do is turn High Times from a media company into an entertainment and experiences company, something that the brothers say is a transition well on its way to completion.

In October 2018, they purchased the Chalice Festival, a weed-centric music and arts festival that Adam calls the “Coachella of weed.” The festival has hit some serious road bumps since, and was postponed indefinitely in 2018 after a disagreement with the California state agency that regulates recreational marijuana use. Other High Times events in the state have faced similar difficulties. Still, Adam and Maxx are hopeful that capitalizing on High Times and expanding events under its name — as well as Chalice’s — is not a question of if, but when. All they need is for the host states to give them permission not only for attendees to smoke, but — most importantly — to buy weed. Earlier this year, the brothers also began looking to run dispensaries under the High Times brand name.

But despite all the lofty talk, it must be noted that High Times has lost substantial ground under Adam’s leadership. In 2018, Cannabis Cup revenue — which accounted for 69 percent of High Times’ revenue last year — was down $853,000 from 2017. And while it’s true that investors are continuing to purchase stock in High Times, they’re doing so in low volume and at low prices — just $11 a share.

Undeterred, Adam insists the IPO is just around the corner, and teases new revenue streams that will push High Times to a level of profitability the upstart stoner magazine’s founder could never have imagined.

“You can quote me when I say that we’re building a billion-dollar brand here,” Adam says, his belly full of steak and shellfish as yet another curtain of smoke rises up around him. Whether he actually believes it is a moot point — as long as someone else does.

Related: Why Has California’s Cannabis Industry Slowed to a Standstill?