Craig Sager, You (and Your Suits) Will Be Missed

Quick story. It’s February 15, 2013. I’m in Houston to talk to some NBA players during All-Star Weekend. It’s Friday night at the Toyota Center. The Rising Stars Challenge game is happening. I’ve got a press pass (because I’m on a press trip for Adidas), and I’m exploring the bowels of the stadium.

Suddenly, who do I see in the tunnel in front of me but Craig Sager, the TNT sideline reporter known for his extremely colorful suits. He’s chatting with a couple of Houston Rockets dance team members. He’s saying something like, “How you doing, ladies? You gotta work all weekend? That is a tough gig.”

I’m delighted to hear this. Craig Sager, the guy I’ve spent hundreds of hours watching during NBA broadcasts for TNT, talking in real life in front of me. Flirting with dance team members, in fact.

I have to tell someone about this. I text my friend/editor. He texts back that I should try to interview Sager about his crazy suits. I realize he’s right. So after the game, I catch Sager walking off the court and I step into his path. I tell him I’m with some men’s lifestyle website he’s never heard of and ask if he’s got a couple of minutes to talk about his suits. He asks if I’m done for the night. I say yes. He says let’s go in here.

Here is the Toyota Center’s VIP bar, a magical world with Charles Barkley, Chris Webber, TNT broadcaster Matt Winer, and about 50 other people. I don’t have the credentials to be in here, but Sager tells the security people that I’m with him. And nobody questions Sager. He’s tall and he’s got a microphone and a crazy suit. And anybody who watches NBA basketball knows him. 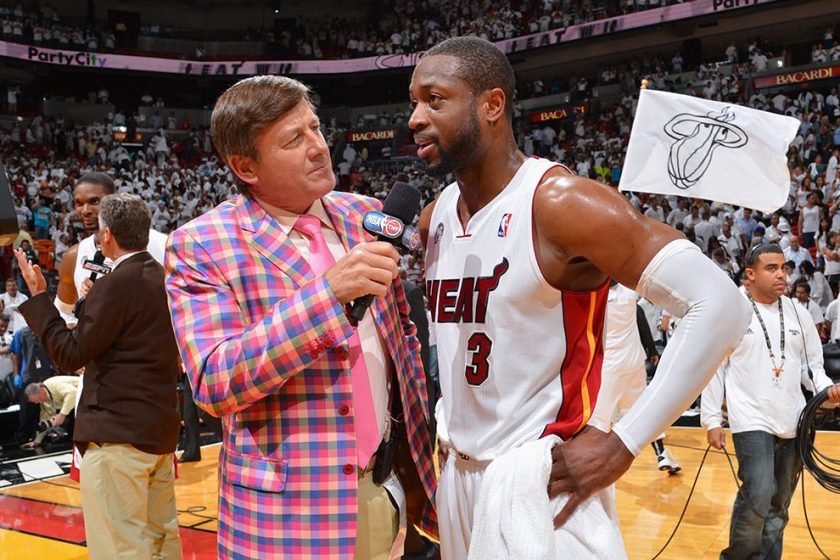 Then Sager asks me what I’m drinking. He buys us a couple of Budweisers, we belly up to the bar, and he asks what I’d like to know. We talk for about 45 minutes. He tells me all about his suits, going back to his high school yearbook photo, when he rocked the boat with a Nehru jacket.

The interview takes longer, because we keep getting interrupted by fans who want to take a picture with Sager. I even take a couple of the pictures for fans. Some of them point out that Sager is “the man.” He gets more picture requests than Barkley. (Well, maybe not. But it’s close.)

The whole time, Sager is gracious and funny and totally honest. With this guy writing for some website that gets a tiny fraction of the eyeballs that TNT does. He buys my second Budweiser. Gives me his card. Totally great experience. That trip, I talked to NBA players Damien Lillard, John Wall, Brook Lopez, and Kenneth Faried. But sharing Budweisers with Sager was the highlight.

I even saw him later that night at a nearby bar and chatted with him some more. I thanked him for entertaining me on all those nights when I was broke and unemployed but still laughing my ass off on my couch, watching him and Barkley and the crew on TNT. Rich people had floor seats. The rest of us had cable.

Craig Sager just died of cancer. He was 65. It’s a shame. He fought the cancer for a few years, but it finally got him. When I heard the news, I was legitimately sad.

The thing about Sager was, he had guts. (Guts is one word for it. There are obviously others. Onions, Bill Raftery would call it.) He wasn’t afraid to wear a bright purple suit on international TV, and he wasn’t afraid to ask question after question to millionaire athletes and coaches with enormous egos—knowing many of these questions would irk his interviewees. And for that, the audience won. We all won. I don’t know if he did it for us—he probably didn’t—but we definitely benefitted.

Back at that bar in 2013. I still remember my final question to Sager: How long are you going to keep doing this?

So long, Sager. There’ll never be another like you.