Before the CIA, There Was the “Cloak and Dagger Group of Snoopers”

The CIG lasted less than two years but laid the groundwork for today's famous spy agency.

The seal of the Central Intelligence Agency at CIA headquarters in Langley, Va. (AP Photo/Carolyn Kaster, File)
By Lee Ferran

“At lunch today in the White House, with only members of the Staff present, [Rear Adm.] Sidney Souers and I were presented [by President Truman] with black cloaks, black hats, and wooden daggers, and the President read an amusing directive to us outlining some of our duties in the Central Intelligence Agency ‘Cloak and Dagger Group of Snoopers.’”

Leahy wrote “Central Intelligence Agency,” but he actually got the name wrong — that agency wouldn’t exist for more than 18 months. He was referring to another U.S. intelligence outfit, one with a brief tenure in post-World War II America: the CIG, or Central Intelligence Group.

In the history of American intelligence, the little-discussed CIG is sandwiched tightly between the daring exploits of the Second World War’s Office of Strategic Services (OSS) and the sprawling, on-going missions of the now 71-year-old CIA. The CIG was created that January in 1946 and shuttered in late 1947 before its second birthday. 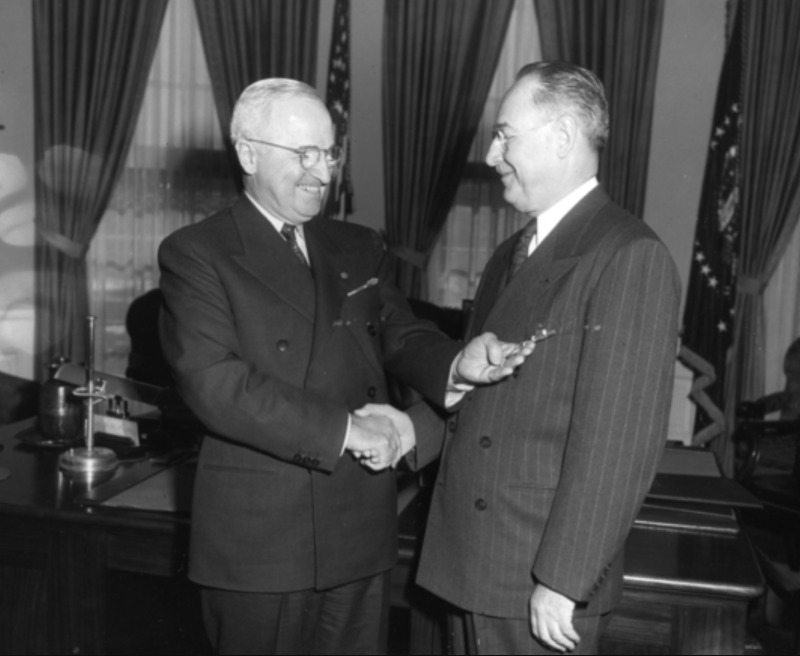 Though the U.S. has a wartime espionage history dating back to the days of the revolution, it wasn’t until after WWII that President Harry S. Truman decided a permanent, peacetime intelligence agency was necessary to help make sense of the globe.

“Strange as it may seem, the President up to that time was not completely informed as to what was taking place in the world,” Truman said in 1945. “Messages that came to the different departments of the executive branch often were not relayed to him because some official did not think it was necessary to inform the President. The President did not see many useful cables and telegrams that came from different American representatives abroad.”

He also complained in his memoirs that what information did get to him was not coordinated with any other piece of information meaning “reports came across my desk on the same subject at different times from various departments, and these reports often conflicted.”

The CIG was an answer to the problem and Truman appointed Rear Adm. Souers — one of the men at that weird lunch — as the first Director of Central Intelligence. The CIG, however, turned out to be much more of a benign agency than even wooden daggers would let on. It was more like a current day Fusion Center, meant to consolidate streams of intelligence from the various military branches and State Department officials.

“First, CIG was literally nothing more than an interdepartmental committee subsisting on handouts of money, people, and facilities from three departments which — capriciously or otherwise — could withdraw their sustaining support at any moment,” a CIA history says. “Also, while CIG could enumerate the many functions assigned to it, the embarrassing truth was that it lacked the power to carry them out.”

The CIG was also beset by bureaucratic jockeying as the senior military officials, diplomats and former OSS officers all fought for influence in the new national security order. “Wild” Bill Donovan, founder of the OSS, once said the CIG was “a good debating society but a poor administering instrument.”

Still, American leaders understood the need for a peacetime espionage agency and CIG lived on 20 months before the National Security Act took effect in September 1947, transforming the CIG into the CIA. For the next 70 years that agency would grow into the global spying, drone striking organization it is today.

But before it breathed its last, the CIG did make at least one lasting impression on the American intelligence community that endures:

The CIG’s Director was organizationally responsible to a new National Intelligence Authority (NIA) made up of the heads of the State, War and Navy Departments as well as a presidential representative. At the second meeting of the NIA, on Feb. 5, 1946, it was decided that the CIG would be in charge of the “production of daily summaries containing factual statements of the significant developments in the field of intelligence and operations related to the national security and to foreign events for the use of the President…” Something like this.

It was an extremely long-winded way to introduce the U.S. government to what we now call the President’s Daily Brief, or PDB.

Forget the Hall of Fame. Barry Bonds Has an Idyllic Second Life as a Cyclist Now.
Shake Shack’s Executive Chef Shares the Secret to a Great Buffalo Sauce
Where “The Book of Boba Fett” Went Wrong
Casper's Premium Mattresses Are Up to 40% Off
Save 28% on a New Pair of Apple AirPods Pro
A Cooperstown With David Ortiz but No Barry Bonds or Roger Clemens Is a Farce
16 Albums to Make You Feel Warmer in the Dead of Winter
The 15 Sexiest Valentine’s Day Gifts
No, Old Music Isn’t “Killing” New Music