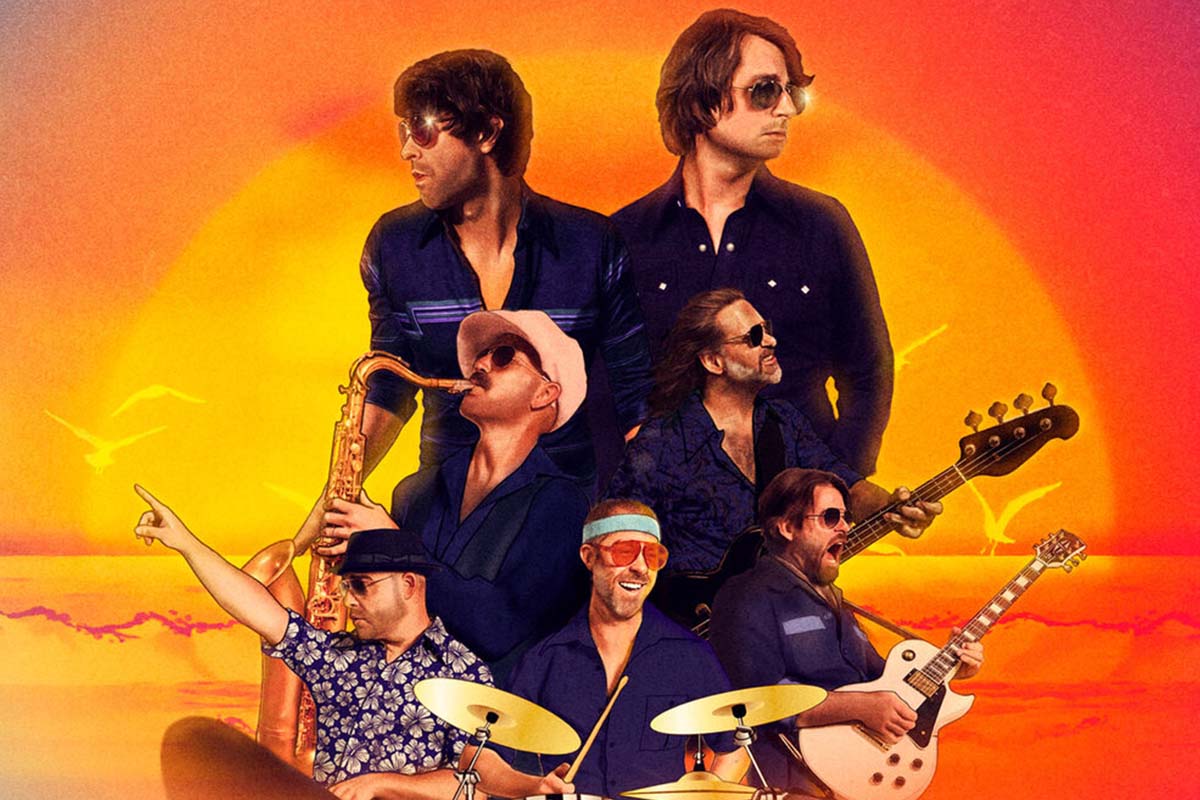 No surprise that when we call Yacht Rock Revue frontman Nick Niespondziani, he and his bandmates are literally lining up to get on a boat to perform some ’70s and ’80s soft rock classics.

They’re not playing actual superyachts (“We don’t play a lot of those … not the super crazy ones, at least”), but for years the seven-piece Yacht Rock Revue has been spreading the gospel of Christopher Cross, Hall & Oates and Kenny Loggins to an increasingly large fanbase. A fervent one, too: a YRR show I attended in New York a few years back had a more engaged (and much scarier) crowd than any metal concert I’ve attended.

Surprisingly, in the midst of a yacht-rock renaissance and with an endless supply of adult-oriented ‘70s and ‘80s hits to cover, the group’s announced the release of their first album of original music. Still more surprising: Hot Dads in Tight Jeans (out today, and easily the best album title of the young decade) is really good. It’s smooth and sexy, a kind of 2020 take on soft rock that adds just enough modern flair (Air and Phoenix are apt comparisons). And it’s helmed by indie producer du jour Ben Allen (Gnarls Barkley, Animal Collective, Neon Indian).

We had a few words with Niespondziani just before his cruise took off. If you can’t find ’em on a boat, you can catch Yacht Rock Revue this spring headlining various halls, ballrooms and amphitheaters across the country.

InsideHook: Do you do a lot of these cruises?

Nick Niespondziani: Not that often. This is the sixth year we’ve done Sail Across the Sun with Train. Other cruises, some are fun, some are really weird. We did a Star Trek one, and the crowd was into it. The headliner was William Shatner, and everyone was my parents’ age.

You just put out Hot Dads in Tight Jeans, an album of new material. Were you just frustrated playing old hits?

We decided to do this about a year and a half ago. We all have side projects where we do original music; I have this psychedelic indie rock band called Indianapolis Jones [According to their Facebook post, they “sound like Tears for Fears, the Beatles and Beck”]. We just felt like the time was right. The biggest surprise is that the audience likes it — I thought they would all be headed to the bathroom during the new stuff. I guess I shouldn’t underestimate our fans.

Who is your audience nowadays?

It varies by city. Some skew younger, but it can range from 30- to 70-year-olds, and sometimes they bring their kids. Somebody ran into me the other day at the airport and told me their 16-year-old was a huge fan.

You were recognized? Are you wearing your yacht-rock gear in public?

It’s sneaking into my real life, but I tend to wear civilian clothes when I’m at the airport. But I guess my style is getting “yacht-ier.” Also, it was in Atlanta where I live. I’m the singer … I don’t know. It’s a real light level of fame.

Besides the sexy new stuff, are you working on any covers you haven’t done before?

We recently added in “Running With the Night” by Lionel Richie. Plus, “Benny and the Jets,” “Sweet Freedom” by Michael McDonald and “Georgy Porgy” by Toto. The great thing about our cover band is we’re not limited by a specific artist. We have thousands of songs to choose from.

Do you deserve any credit for the resurgence of Toto’s “Africa”? I think you’ve played it at every show I’ve seen.

I’ll take all the credit you want to give me! I think it was just a matter of yacht rock getting into the public consciousness, and we were rising up at the same time. It doesn’t matter what’s feeding what, we’ll just continue to ride the wave.

How modern can you push the yacht-rock thing when you’re doing covers?

Well, we’ve been pushing boundaries both ways, doing some late ’60s and early ’70s songs. We’ve been doing that song from Anchorman (“Afternoon Delight”), but we’ll go as late as Whitney Houston and Madonna.

The press release for your new record compared your original music to bands like Air and Phoenix. I was surprised at how accurate that descriptions is.

That’s my jam. I like psychedelic pop dance music, stuff like LCD Soundsystem, Air and Tame Impala. So it felt pretty natural, and it’s a bit of good luck that the sound is in vogue.

You ever play with those bands?

We have not. We usually play with a lot of old timers — I’ve sung “She’s Gone” with John Oates, for example, and a few times with Eddie Money before he passed. But I understand there’s a certain stigma around us as a cover band. All we ever ask is to give us one chance. Kenny Loggins was skeptical, but he eventually got it.

Do these artists hate being associated with the “yacht rock” label?

A few. Boz Scaggs was in Rolling Stone spouting off on yacht rock. He said he was a blues artist. And some artists we’ve approached, no amount of money would get them to have us as openers.

What can people expect on this new tour?

We’ve got our own lights now, just like the ones from the new “Step” video. We bought a few sets, a video wall and got some backup singers. Because there weren’t enough people on stage already.

Everyone’s responsbile for their own costumes. I have an entire separate closet of polyester and bell-bottom jeans. I probably own 50 polyester shirts. It’s a deep bench.

For name alone, would you ever work with Lil Yachty?

He’s awesome! One of our buddies mixed his last record. It’d be a dream to work with him.