Do You, a Man, Understand Taylor Swift?

It might be time for you to start understanding; she's not going away any time soon

On TikTok lately, the Swifties — while waiting with bated breath for Taylor Swift to release her new album Midnights (which is finally out today) — have taken to gatekeeping, especially when it comes to male fans of their favorite artist. After all, they insist, how could men possibly understand the true meaning of lines like “you drew stars/around my scars” or how she explains the pain of womanhood on songs like “My Tears Ricochet”?

The idea that men don’t “get” Taylor Swift is not necessarily new. It’s been at the very least humming at the edges (and at the most front and center) of the fandom since Swift became a household name. Did the dividing gender line come after Kanye West’s hijacking of her acceptance speech for the Best Female Video award at the VMAs in 2009? Was it after the same feud was resuscitated in 2016 after leaked videos showed Swift seemingly agreeing to being referenced in West’s song “Famous” (she didn’t, really)? Or was it before all of that, when her songwriting was brushed off as being about “all her exes”?

“I think you’re still seeing it to some extent, to this day, this narrative of ‘Oh, she just writes about her ex boyfriends.’ Like, okay, yeah, she wrote about her ex-boyfriends when she was 18. Because that’s what 18-year-olds write about. I wrote about my exes when I was 18,” says fan Santiago Melli-Huber. Melli-Huber, who first got hooked during Swift’s Speak Now era (“‘Mine’ just had like, a chokehold on me,” he says), has been an unapologetic Swift fan ever since.

For Melli-Huber, Swift’s music wasn’t just the soundtrack for nights out with friends. “This woman will write something like, ‘How’s one to know/I’d meet you where the Spirit meets the bones/in a faith-forgotten land/in from the snow/your touch brought forth an incandescent glow/tarnished but so grand,’” he says, quoting the Swift song “Ivy.” “How can you hear words like that, and think of her as anything other than a poet?”

A new appreciation for Swift’s music and lyrics came for her fans of all genders after the release of folklore and evermore, two albums with Swift’s most fictionalized songs, in 2020. Both were nominated for numerous awards, including Album of the Year at the Grammys, and they became pandemic soundtracks while people all over the world were still grappling with lockdowns. Fans on Twitter and TikTok bring up these albums as the ones with lyricism that spoke to them at some of the most challenging points of the last two years.

“‘Happiness’ stopped me in my tracks,” says fan JB Bridgeman of the evermore track. “It came out at the right time of me getting over an ex, and it captured that feeling of like, still being angry, but knowing that there is happiness beyond that anger and that hurt. I texted my ex, which was probably ill-advised, but we’re on friendly terms now. That was probably the start of that, honestly.”

Fan and teacher Nathan Melby says that he started paying attention to Swift after the release of evermore. “The only reason I began to listen to it was because one of my favorite bands is The National, and she has a song with Matt Berninger on there. So I put that song on, and I listened to it, and I really loved it. I was driving, and I kept listening, and I was like, ‘Oh, my God. She’s really good.’” 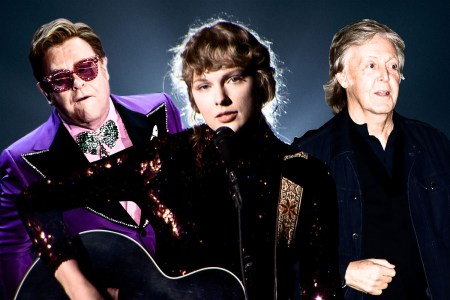 Now That Taylor Swift Re-Recorded Her Old Music, Could These Other Artists Follow Suit?

After the new version of "Fearless," will we see a slew of musicians re-recording past work?

Songwriting has always been a form of poetry, which means that “getting it” can mean two separate things: understanding meaning and references, and understanding the feeling behind it. For fans like Melby, both are important.

“To me personally, getting it is always gonna be about the feeling that it brings,” he explains. “But I do feel like her lyricism isn’t something that has been done as well in modern pop music for probably at least 20 years. It’s always fun to me, you know, as an English teacher, to see kids get the different literary references and stuff like that.”

If there’s anyone who can speak to “getting” Swift’s lyrics, maybe it’s the person who teaches them. Professor Elizabeth Scala of the University of Texas Austin is a professor of Taylor Swift — literally. (Well, okay, she also teaches English.) In her course “The Taylor Swift Songbook,” Swift as poet is stacked up against the likes of Shakespeare and Chaucer.

“We’re reading a lot of really classic, early British literature, because that’s my area of specialization,” she explains. “These poems feel really distinct to us, because they’re a bunch of Renaissance courtiers, or people pretending to be Renaissance courtiers. Then we have Taylor Swift talking for the girls who’ve been heartbroken or who are angry, or who are maybe in their own seduction mode.”

Scala tells InsideHook that she sees how making these literary connections has been beneficial for her students. “All of a sudden they have the patience to look at this earlier stuff, because they see the strategy has already been laid out in a Taylor Swift song,” she says. “I think Shakespeare is helping them weirdly read and appreciate the Taylor Swift lyrics more. And then the access to the Taylor Swift lyrics is helping the students go and read some poetry that feels inaccessible to them more easily.”

Of course, an academic understanding of the lyrics isn’t necessarily what fans online are referring to when they talk about “getting” Swift lyrics. However, the media buzz surrounding courses just like Scala’s about Swift as a songwriter and artist shows just how powerful Swift is culturally right now, and her songwriting prowess has been further emphasized with her own Spotify songwriter page being launched this year. Simply put: not “getting Taylor Swift” is out. Respecting a female artist for her hugely diverse body of work is in.

As for the meme itself, Scala says that the idea of it makes sense. Swift is “writing about the way in which men in relationships, her own or fictionalized, don’t understand,” she explains. “The gaslighting angle that she uncovers in a lot of her music is something that I think a lot of women really identify with and relate to.” Overall though, music is music, and who’s to say that someone doesn’t “get it” as much as another person?

“There’s certain music that makes us feel better or lets us, you know, wallow in the feels,” Scala says with a laugh. “You can at that point think that Taylor is not only talking about herself, but she’s talking about you at that moment.”

Of course, none of the male Taylor Swift fans that InsideHook spoke to feel all that put out by a tongue-in-cheek meme that flips the idea of Taylor Swift being “for girls” into a good thing instead of a patronizing statement about teenage girls (who, spoiler, are typically how music gets popular in the first place) and their interests.

“I don’t know, if someone wants to tell me I’m not a Taylor Swift fan, I’m literally looking at a signed CD of hers,” Bridgeman says. “I also wonder if sometimes people are saying like, ‘Taylor Swift is for the girls’ in the larger sense of not just cis women, but like, the girls,” he adds, referencing a slang term for the LGBT+ community, who Swift has been supportive of throughout her career. (There has even been speculation by some fans who have dubbed themselves “Team Gaylor,” that Swift may be queer herself.)

As she releases yet another album, and rumors of a stadium tour make the rounds, we are about to enter a new Swift era. What that could look like is ever-changing: country-inspired a la Taylor Swift? Pop like 1989? Or more of the romantic, fictionalized stories of folklore? For Melli-Huber, who turned 22 the year “22” came out, growing up with Swift means that whatever music she creates, he’s found connection with her as they both age and evolve. “I would be interested to see her musical take on parenthood, or if she gets married, or separated again, or even if she chooses to take a break from music and then comes back later,” he says. “Whatever life experience she has, and how she chooses to process it and write about, I’ll buy that album.”