Is Lordi the Overseas Answer to America’s Emasculated Rock Music?

Lordi performs at the finals of the 2007 Eurovision Song Contest. (Photo by Johannes Simon/Getty Images)
Getty Images
By Tim Sommer

We want to believe in rock’n’roll Gods who cast giant shadows, swing great axes, and live in an improbable world of cartoon eroticism. We want to embrace objects that are larger than life, but incapable of actually harming us. This is why our first loves were Barney or that hyperthyroided mop, Elmo; both were spectacularly non-human but walked on two feet, looked us in the eye, and made no demands on us, other than to be hugged (much like Gene Simmons). It’s also why Dinosaur-obsession is virtually ubiquitous amongst school-age children; dinosaurs are fearsome giants that can no longer hurt us, yet they actually walked this earth (much like Gene Simmons). This desire for ultimately harmless big ol’ beasties is also behind the appeal of fantasy stories, from Star Wars to Lord of the Rings to Game of Thrones. Each of these feature creatures utterly impossible on earth, but none of them are going to jump out of the screen and do us any harm.

Lordi are a Finnish horror metal band. They’ve been around for over 25 years, and they’re absolutely gigantic in Finland. If you tried to explain how big they are in their homeland, people would think you were joking: Streets are named after them, the mainstream media follows their every move, and their actions impact the local economy. 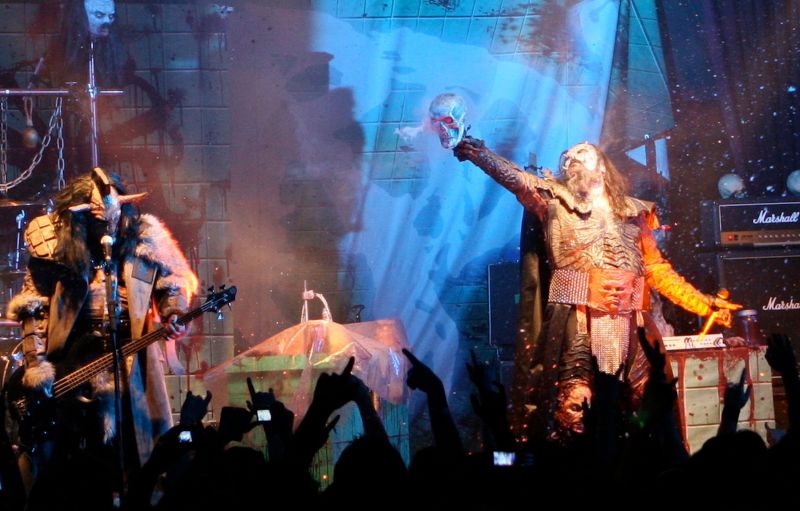 Lordi appears exclusively in elaborate and impressive costumes that obscure any recognizable features, and they present themselves as decaying mummies, furred and half-faced zombies, horned monstermen, sexy living skulls, men-dragons with burnt and shredded skin. The band members hide behind the anonymity of these creations 24/7 and are known only as Mr. Lordi, Amen, Ox, Hella, and Mana. Lordi are Vikings of the living dead, outcasts from a professional wrestling league made up of White Walkers and Orcs.

Often, Lordi’s lyrics verge on Spinal Tap-like parody. Let’s note the relatively recent “Hug You Hardcore” from their most recent LP, 2016’s Monstereophonic (Theaterror vs. Demonarchy): “Let me mount you gently/Love with a fist/Intruding rear entry/You’re gonna like this…Ride the Hershey Highway/Tight it for the monster truck/Face down! Ass up!/Here we come, we wish you luck.” These droplets of poesy are coupled with a high-end video that explicitly features a male sub getting treated by a female dom in the fashion just described.

I am fairly convinced Lordi could save rock’n’roll.

Here’s why: Lordi are giant bad guy wrestlers just waiting to be embraced by a nation of teenagers who really, really could use giant bad guy wrestlers with sluicing metal riffs and raucous, anthemic songs. Lordi are the anti-U2, the anti-Radiohead, because they have replaced pompous posturing and soggy self-congratulating artistry with the artistic and conceptual equivalent of 7th graders drawing penises and pentagrams on the school bathroom wall.

Rock’n’roll, sadly, has resigned itself to being something Mom, Dad, and the Kiddies can share – fun for everyone! What we experienced in previous decades – young people listened to immature, bird-flipping rock’n’roll accompanied by videos with a lot of chesticles and tush-cakes in them, and parents did not like it one damn bit – seems like a long-dead conceit. No one thinks U2 or the Foo Fighters offend anyone.

But Lordi would piss off your parents, they would piss off music lovers, and they would certainly piss off the unrelentingly PC (or even the moderately PC). Perhaps most egregiously (and why you will never hear a single reputable American music critic ever say anything nice about Lordi), they are a gigantic cultural throwback, in so much as absolutely nothing about their music or optics reflects the biculturalism or social sensitivities of the past twenty or thirty years. This is lumpy, rhino-subtle Misfits/KISS metal, with videos full of bosoms, bottoms, and video game violence. As Lordi says in “The Riff” (from 2013’s To Beast or Not To Beast), “So the devil’s out of touch/And he cannot smell a hit/Cuz he has lost his mind/With all that hip-hop sh-t.”

Man, can’t you see that couplet scrawled on middle school notebooks all over America? 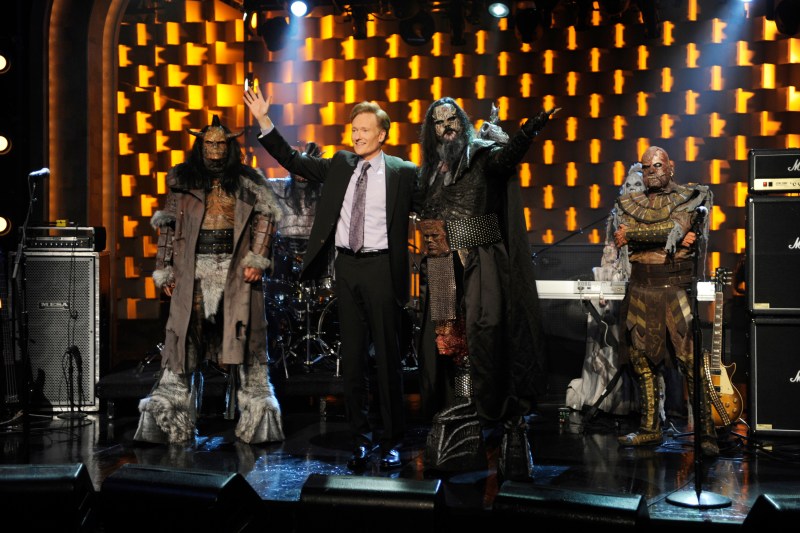 Now, I do not approve of every facet of Lordi’s imagery or lyrics, but then again, I shouldn’t. Their music isn’t made for me; it’s made for a deeply under-represented constituency of music consumers: young males who like loud guitars, big choruses, and harmless monsters, and are terrified by sex, responsibility, and algebra. These adolescents want Barney with fangs, Barney who fears Vagina Dentata, Barney who makes bad jokes about the Hershey Highway and shouts “rock’n’roll” a lot. It’s been a long time since we’ve had one of those bands, right? In the 1970s and ‘80s, there was an enormous amount of music for this faction, and there was a reason for that. My god, do you know how terrifying the opposite sex is to some testosterone-lump in middle school or high school? In their hearts and minds, they still want to be members of the He-Man-Woman-Haters-Club they formed in 3rd grade, but their bodies are telling them something else entirely. It is precisely this kind of tension that created some of the greatest and stupidest rock’n’roll ever made.

Old-school MTV would have loved Lordi. They would have made them the stars (in America) they deserve to be. MTV would have understood that children need their dinosaurs, their Elmos, their cartoon heroes, names to be chanted around a campfire to create tribal identity, superheroes that assuage our sexual immaturity and confusion with corny, horny jokes. Teenagers are essentially powerless, except as consumers, so they need to access power manqués; unable to pay their own way in life, barely able to leave the house without permission and still yoked to the oxen of homework and household responsibilities, teenagers need to put on a Godzilla mask every now and then. Sometimes this takes the form of Call of Duty or World of Warcraft. These games supply male teenagers with the illusion of control and power at precisely the time when they have virtually none.

Rock’n’Roll needs its World of Warcraft, and that, friends, is Lordi.