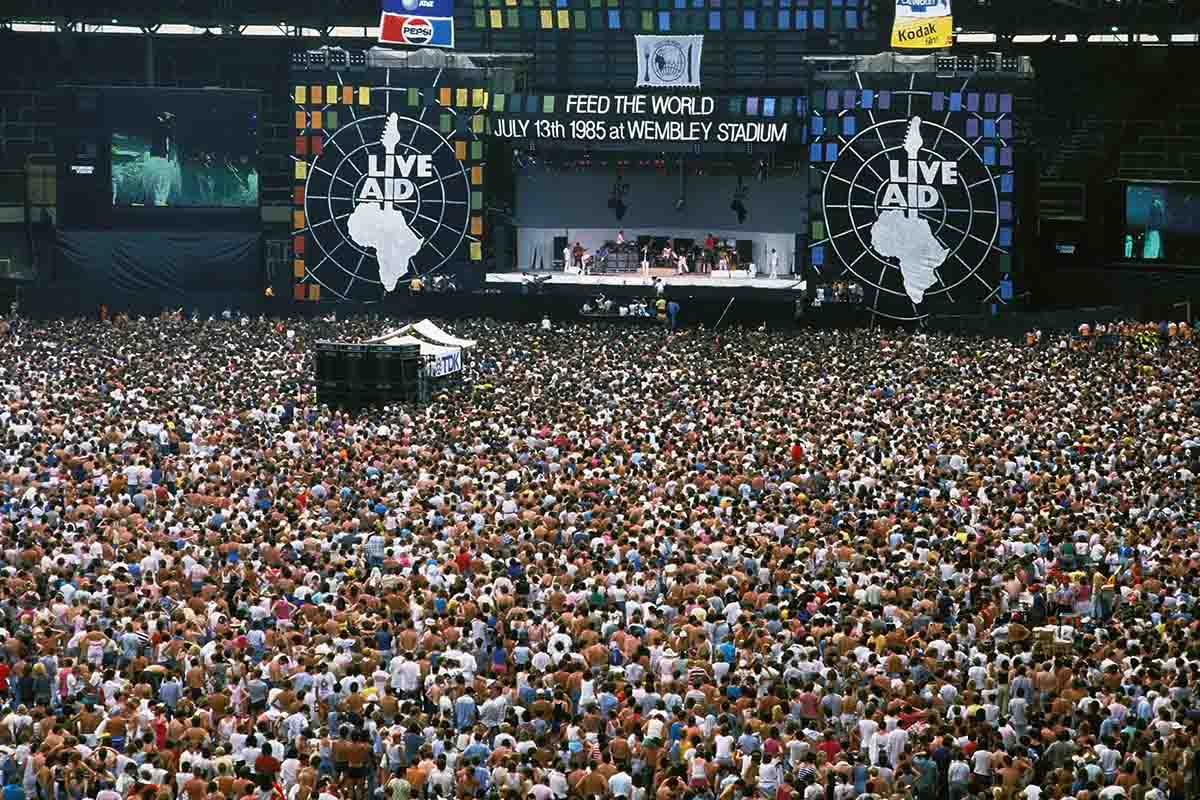 Editor’s note: This article originally appeared on InsideHook in 2015, discussing Live Aid’s 30th anniversary. We figure now is an especially good time to celebrate a live show that brought together the world for a good cause.

Your correspondent was in junior high, glued to the tube to watch two concerts held simultaneously in John F. Kennedy Stadium (Philadelphia) and Wembley (London). The broadcast played worldwide for 16 hours to nearly two billion people. It was unforgettable.

Organized by Boomtown Rats frontman Bob Geldof, the transcontinental show was designed to raise funds to combat the Ethiopian famine.

But it wasn’t perfect. While the intentions were good, the money may not have gone to its intended parties. Sound issues plagued everyone, especially Paul McCartney (who performed in silence for nearly two minutes). Duran Duran were horrible. And diversity was not a priority for the day: witness the lack of hip-hop, R&B and dance artists. Plus: no Springsteen, Michael Jackson, Prince or — hey, they had a No. 1 record at the time — Tears for Fears.

All that aside, Live Aid was a technical wonder. A humanitarian benchmark. And an artistic triumph whose lingering influence among festivals is perhaps only rivaled by that of Woodstock.

The show featured previously thought impossible reunions of The Who, Led Zeppelin and Black Sabbath. U2’s performance catapulted their career; Queen’s was voted the greatest set of all-time.

For music nerds (like yours truly), it was an unforgettable day of great music, big 80s hair and, well, fucking weirdness. To wit:

In case you missed it, we made you this …

How to Enjoy Live Aid (again)

Scour this ridiculously detailed timeline of every performance.

And look to YouTube … which is how we got the following five amazing performances:

An operatic Freddie Mercury urged both stadiums to recreate the handclaps from their “Radio Ga Ga” video; 150,000 responded.

Yeah, terrible sound, overly sweaty Robert Plant and why, god, why the ubiquitous Phil Collins on drums. But hey, it was Zep’s first show in five years.

During a 10-plus minute performance of “Bad,” Bono crawled onto the floor of the stadium and slow-danced with a fan in the front row.

“Dancing in the Streets”

A music video that debuted during the concert, David Bowie and Mick Jagger’s duet was both ridiculously homoerotic and, years later, a frequent Family Guy punchline.

In his first show since suffering a paralyzing car crash three years prior, the R&B singer joined Ashford & Simpson for an emotional duet of “Reach Out and Touch (Somebody’s Hand).”