Adam Ant: The Once and Future Rock Star

40 years into his career, more Americans need to discover this under-appreciated performer.

At the Ridgefield Playhouse in Connecticut, a tiny theatre tucked into an anonymous corner of wet and blue suburbia, Adam Ant – yes, Adam Ant – reclaimed our heart, reaffirmed memories long set aside, and reminded us what a rock’n’roll star was.

You know a rock star when you see one.

They bear our features, but are larger than life; they are impossibly virile, impossibly thin; they are hot like bullets and cool like ice; they have smooth and proud brows, like Roman emperors in marble; their swaying hips tell eight thousand stories; their adamantine eyes, blue or green or coral black, pierce both the front row and the back row.

The best Rock Stars remind us of the first rock star many of us ever met: The six-packed, perfect-jawed, femme-eyed, flaxen-haired Man on the Cross. Man and woman may have been made in God’s image, but only lowly man made the Perfect Impossible Jesus, the root of all our rock stars. The Perfect Impossible Jesus was built out of marble, painted in oil or gouache, or even laced into roseate glass; and displayed on eight hundred and eighty thousand canvases, ceilings, and windows.

You know Rock’n’Roll Stars when you see them. They defy death because they are death, because they present themselves as if they were never born. They merely stepped out of our dreams of the impossible gods and monsters, and the laws of life did not apply to them.

This is, perhaps, why we deny them when they age; we blame them and gossip about them, and do not see their decrepitude and impermanence as a reflection of ours.

You know a rock star when you see one: Jim Morrison’s silhouette just popped into your head, didn’t it? Or was it Plant’s sun-colored curls, swept over a shoulder reflecting yellow and blue arena lights, or maybe Bolan’s faux-shy half-hooded eyes and Botticellian curls? Or was it holy sexgnome Prince? Or maybe you saw in your mind the two most perfect rock stars, leonine David Lee Roth and the Caesar-in-Berlin Bowie.

You know a Rock’n’Roll Star when you see them: They are larger than life; they emerge from the ark of light and life. We can imagine them striding out of the Old Temple and sitting by a strip-club stage, and they look up at that stage and see themselves dancing; and they laugh at us mortals, “I am the one I most want to f**k and I f**k myself!” Isn’t this what Bowie or Plant or Prince seem to say?

You know a Rock’n’Roll Star when you see one. Paul McCartney is a genius, but not a rock’n’roll star; Freddy Mercury, now that’s a rock’n’roll star, maybe even a rival for the title of the greatest one. Squishy Billy Joel, talented, yes, but not a rock star, yet Jerry Lee Lewis is one. And you certainly do not have to be a man (and here we light a candle for the memory of the amazing Lorrie Collins of the Collins Kids, who died just this past Saturday). All you need to do is ask yourself, Do they look like they are sitting in a strip club, watching themselves on stage, and thinking, “I want to f**k myself”? That’s how you know.

Adam Ant was a rock’n’roll star, and how amazing, how life affirming it is, to find that he is a Rock’n’roll star once again nearly forty years after his post-punk glory days. 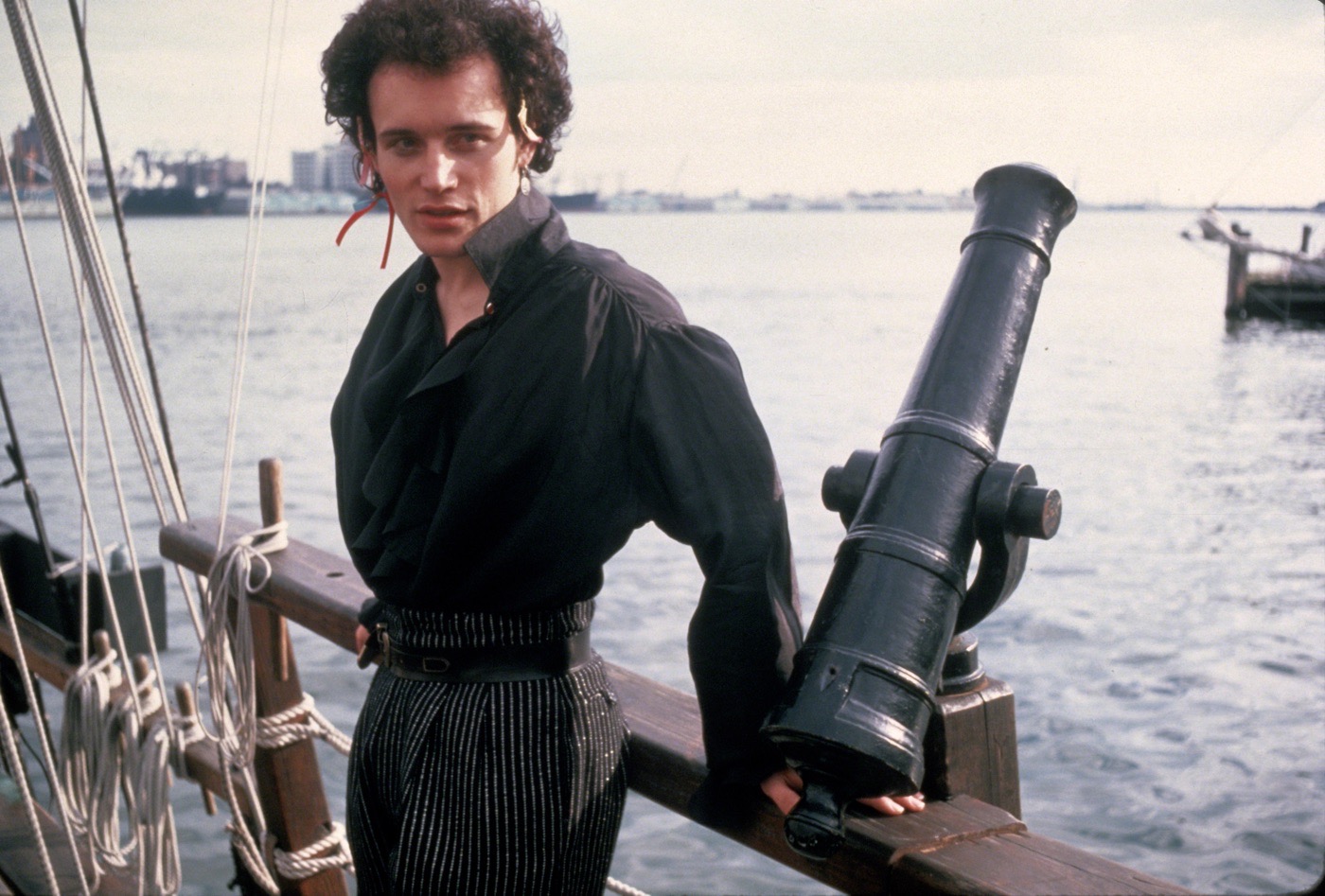 See, the last time I had seen him — a few years back — Adam had seemed like an older and uncomfortable man imitating the old moves. His features had dissolved in age’s flesh (just like ours), he seemed desperate, begging for the past instead of effortlessly citing it. He did what no rock star should ever do: he inspired pity.

But that was then.

In mid-2018, in the seventh month of the eighth year of his fifth decade as a performer, Adam Ant was entirely, hugely, profoundly different.

He was brilliant, living, stomping, swinging, swaying, twisting, hollering, hiccupping, yodeling rock’n’roll star. On this night, on this Anthems Tour, he owned the idea of Adam Ant. I swear to you, he was better than he had been the brace of times I saw him (over) a third of a century ago, and unrecognizable from the sad, desperate specter I had seen just a few years past.

It was a reminder both that our memories had been accurate, and that there was life in our memories. Here is what I mean by that:

Our memories were accurate: Adam Ant was and is a star, a twisted star rubbed with elasticity and originality and charisma, fronting his strange thumping glam, the Shadows via the Sex Pistols, Bolan via Burundi via Football chants, punk rock played by Westworld cowboys.

On two essential albums (1978’s Dirk Wears White Sox and 1980’s scene-changing Kings of the Wild Frontier), Adam and the Ants integrated prevailing trends in Post Punk with a kind of glee, silliness, and anthemic joy that the genre almost entirely lacked. Although both albums bear some real similarity to the contemporary (’78 – ’81) work of Bauhaus, the Monochrome Set, Public Image Limited, U2, Southern Death Cult, Lords of the New Church, the Skids, and even the feral, rhythmically rumbling aggro punk of Flux of Pink Indians and Subhumans, Adam and the Ants instilled these elements with an unabashed love for glitter and glam. And especially the character-adopting silliness of English Music Hall and traditional English Pantomime.

Wait, there’s more to the amazing, electric mofungo: To all of that, they added a kind of theatrically sleazy rockabilly, indebted to the music and imaging of Gene Vincent, Duane Eddy, Vince Taylor, Link Wray, and Johnny Kidd and the Pirates. The result was absolutely unique, and still sounds startling and fresh: Glitter informed by both CRASS and Disney. On top of this, circa 1980/’81 The Ants presented a colorful, costumed live show that was absolutely rank with showbiz, and a fascinating and welcome alternative to the frowning sincerity of the day.

And on stage at Ridgefield, Adam Ant was that once again. Not a Xerox, not an imperfect copy, not a wax figure, but a brilliant elder curator of our past memories, living within his legacy, not in the shadow of it. And in front of those flash whacks of songs (Ziggy invented by Joe Meek, and if that’s not the perfect description of Adam Ant I don’t bloody know what is), he was what he had always been: Michael Jackson imitating Jim Morrison, Laurence Harvey starring as Gary Glitter, perhaps most of all P.J. Proby via Gene Vincent. Which is all to say he was mincing and acrobatic and airborne. You could see God’s fingerprints in Adam’s fey clay and still gasp-perfect features; he was vigorous, sexy, intense and in the moment. And he was full of the twisted vigor of the Arapaho pretender and the serpentine slide of the dandy highwayman sneaking through the window. He was everything we remembered, just a little bit older, a little closer to the ground; he was full of the old helium but the balloon was a little less red and a little more sepia.

And we all felt better watching him.

We discovered we had been right to love him thirty five years ago, when he spun and double-stopped and triple stopped and dropped to the floor and girls and boys held their breath. Back then, we could not imagine aging, because we had never been old, because we imagined there would always be another sunbaked summer followed by another perfect autumn when the city’s stones are dripping with the happy tears of a September rain. When we are young, we imagine these jewel-like seasons will follow each other, never ending.

And in 2018 (I am as old as my dad when I looked at him and thought, “Old, done, old”), here was Adam Ant, old just like us, only he was a god; and he showed us that we could find the god in us. And he was nearly as perfect, nearly as full of summer and autumn as he once had been, even as winter’s shorter days, unimaginable when we first loved him, could be seen from the high window.

His band was magnificent, screwed loose and screwed tight. They rumbled and tore through the material (every song you wanted to hear) like 24 year-olds desperate to burn holes in their amps and win over a tough crowd full of college town drinkers. They played like they had something to prove, my god, they played like they wanted to get laid. It was a fantastic band (let’s especially scream for impossibly cool guitarist Will Crewdson and Warhol Star drummer Jola), they raised Adam higher; and with their clean but dirty punky fuzzy Cramps-via-Heartbreakers-via-John Berry Seven parade stomp they said, “We are a gang, and he is our leader, we will not let him down so he will not let you down.”

You may be thinking: Could he have been that good? Yes, he was.

He was a rock’n’roll star, again. He owned Adam Ant, again, and the Adam Ant in our hearts, again. He made us feel proud that we loved him and also proud that we had aged with him. I am you, he seemed to say, old but alive. Yet he also said, I am not you, because I was and always will be a rock’n’roll star. See (he seemed to say to us), you were right all along, you could trust your memories, and I am a god!