Six Films From Cannes That Will Kick Off the Awards Season

You will be hearing about these contenders in what has become a year-round quest for Oscars. 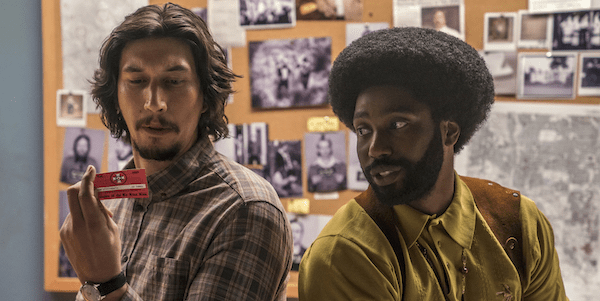 Comme ci comme ca: that pretty much describes the so-so films unspooling at this year’s 71st Annual Cannes Film Festival. It seems that the biggest controversies have occurred on the red carpet where, for example, 82 women, led by Jury head Cate Blanchett, flanked by Kirsten Stewart and Ava DuVernay, mounted the famous stairs in solidarity. #Metoo and #TimesUp yes — but what about the strength of the films? As for the international premieres, which have been light on English-language offerings and star power, what has become a central station in the cross for the annual Oscar race appears relatively marginal. That’s particularly true when compared with past years that introduced Blanchett’s Blue Jasmine and the awards sweeper The Artist, which won a Best Actor for Jean Dujardin at the festival and went on to score five Academy Awards.

Exiting Cannes, what films could be contenders in what has become a year-round, international Oscar season?

Spike Lee’s BlacKkKlansman starring John David Washington (son of Denzel and star of TV’s Ballers) and ubiquitous Adam Driver (Star Wars: The Last Jedi) lit a fire under the Cannes audience. So far, it’s the strongest American contender. The fact-based story of a black policeman who infiltrated the Colorado white supremacist movement in the 1970s couldn’t be timelier for a period movie. Lee has been nominated for two Oscars – and received an Honorary Award in 2016. Look for him in the nominee circle for Best Director – unless the film has been overpraised in the fizz and glitz of the French fest. That may account for the glowing reviews from the majority of critics with a 96 percent fresh score on Rotten Tomatoes but a troubling 5.4 out of 10 over on IMDB.

Everybody Knows opened the fest with the one-two punch of Penelope Cruz and husband Javier Bardem – both past Oscar winners. Focus Features snapped up the family saga, ostensibly for an awards season run. Iranian Director Asghar Farhadi (A Separation) – a repeat nominee in the Best Foreign Language Film category — makes his first foray into Spanish-language filmmaking. In this psychological thriller, past secrets rise up to shake the present when a native daughter – Cruz – returns to her hometown near Madrid from Argentina and upsets the community’s tenuous balance. Overall mixed reviews might hobble the film, which looks like more of an arthouse audience pleaser than a hardcore contender. Still: Cruz! Bardem!

Cold War: A 1950s romantic thriller set in Poland, Berlin, Yugoslavia and Paris, was deemed “ravishing” by The Wrap‘s Steve Pond. The black-and-white film has both impassioned reviews (100 % on Rotten Tomatoes) and an awards pedigree going for it. Polish Director Pawel Pawlikowski scored a Best Foreign Language Film Oscar for his Ida in 2013 – and looks to be heading back to Hollywood with his latest.

Be Natural: The Untold Story of Alice Guy-Blache: After a justified scolding about the lack of women directors at Cannes, it would seem natural that this documentary about the pioneering female film director who founded Solax Studios in Queens in 1908 would be all the rage. Executive produced by Robert Redford, directed by Pamela B. Green and Kickstarter funded, the film has remained largely under the radar. Expect repeated future festival screenings, and a Guy-Blache revival to change that, placing this documentary on the short list for Best Documentary Feature Film. “….This story of the first-ever female director goes back to the beginning of movies but is about as relevant as it gets,” Deadline‘s awards expert Pete Hammond passionately pled in the film’s favor.

Wildlife: Last year, Carrey Mulligan acted her eyes out as the bedraggled Southern wife torn between two brothers in Mudbound, but Mary J. Blige right stole the drama’s Best Supporting Actress Oscar nomination from the English actress. Now here comes Mulligan in actor’s actor Paul Dano’s directorial debut opposite Jake Gyllenhaal – a movie that already received Sundance acclaim. Adapted from a Richard Ford novel by Dano and partner Zoe Kazan, it’s the Montana-set drama of a marriage’s dissolution as seen from the perspective of the couple’s sensitive son. It’s definitely awards bait from the Film Independent Spirits and for first-time director Dano – but it appears to have larger hopes for stars Mulligan and Gyllenhaal.

Leto: With Russia perpetually in the news, let’s not overlook one of the festival’s most popular films. From Russian director Kirill Serebrennekov comes a rock movie set in 1980s Leningrad that sets the audience dancing. Time‘s Stephanie Zacharek noted the film “resembles Iain Softley’s marvelous and largely forgotten 1994 Beatles origin story, Backbeat.” The fictionalized saga of Russian rock pioneer Victor Tsoi (Teo Yoo) who co-founded the influential band Kino (before dying tragically in a 1990 car crash) celebrates the universality of music while hewing to the inevitable downward spiral that accompanies most behind-the-music stories, real or fictionalized.

While there remains room for surprises as the festival winds up and distributes awards on Saturday, this year will likely be remembered for the day 82 women held a stand-in on the red carpet – but not for the heights of the films in competition and out.