How the ‘Godfather of Gore’ Shaped Today’s Filmmakers

Director Herschell Gordon Lewis died on Sept. 26 at age 90 (or possibly 87, depending on where it was reported). While the date of his birth may be debated, the size of his influence cannot. Understand: Lewis will never receive a lengthy tribute at the Academy Awards, because people whose films have titles like She-Devils on Wheels, The Year of the Yahoo!, and Boin-n-g rarely do. That said, the people he inspired have won Oscars (notably Quentin Tarantino, with his pair of Academy Awards); and Lewis was even discussed at length in the 2007 film Juno, which earned a Best Original Screenplay Oscar for Diablo Cody.

Lewis never aspired to make great art, yet inadvertently triggered a breakthrough in filmmaking. At the beginning of the 1960s, the Northwestern University graduate—who had planned to go into journalism, only to change course because he “didn’t get any offers”—was making “nudie-cutie” films. These were exploitation flicks that existed only to feature female nudity (though never full frontal), in the guise of offering “documentary” footage of such events as nude volleyball games. Together with producer David F. Friedman, Lewis decided to skip the nudity and come up with a new approach to sell his movies.

The result was 1963’s Blood Feast, which follows a serial-killing caterer. Blindsided censors wanted to stop it but couldn’t, because they hadn’t even yet created rules to block such a thing. As Lewis told The A.V. Club decades later: “They had no regulations against gore, because no one else had done gore. It would be like having regulations against outer-space driving.”

Simon Abrams writes of Lewis’ work on RogerEbert.com: “Blood Feast is a terrible film, and a historically important one, too,” capturing the paradox of something so crude being so significant. It was also an absurdly profitable effort: shot in six days for $24,500, it earned somewhere between $7 million and $30 million. Other filmmakers would soon follow this disgusting yet often lucrative path, notably John Carpenter (Halloween; Escape from New York), Wes Craven (The Last House on the Left; Nightmare on Elm Street), and John Waters (Pink Flamingos; Hairspray), all of whom crossed over to the mainstream to a degree Lewis never did.

Indeed, Lewis abandoned film entirely for decades to work in advertising, though not before producing other splatter classics, such as 1964’s Two Thousand Maniacs!, starring Playboy Playmate Connie Mason and inspired by the Lerner and Loewe musical Brigadoon (the pair is best known for My Fair Lady.) 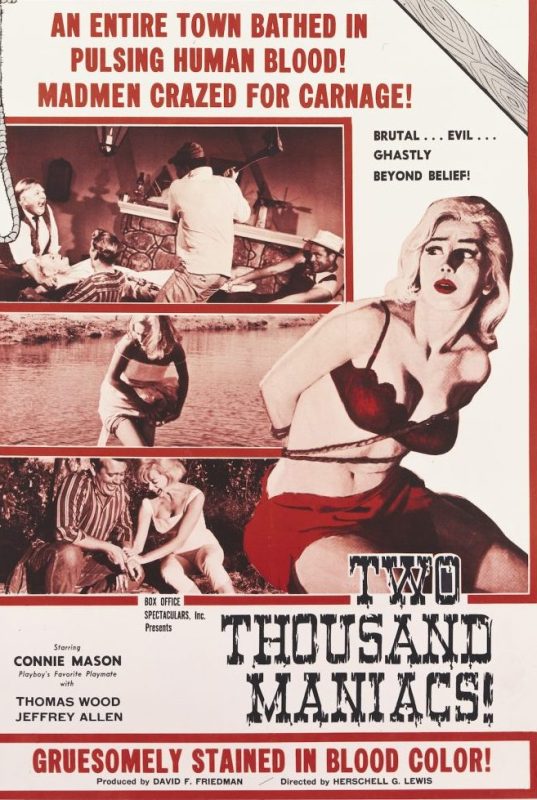 While Lewis’ penchant for incredible carnage might be the most easily spotted aspect of his legacy today—see much of the work of Tarantino and Robert Rodriguez—Waters was quoted in The New York Times, observing that Lewis “made fun of himself from the very beginning, which I thought was endearing.” Lewis himself maintained a charming humility, noting in 2006, “To some extent, Blood Feast is an embarrassment, not just to me but perhaps to the entire motion picture industry.”

Below, watch the trailer for Blood Feast, which shows that while Lewis may have had limited talents at making movies, he was a genius at marketing. (In particular, savor the lengthy, hilariously solemn warning urging anyone with a “heart condition” to “leave the auditorium for the next 90 seconds.”) At the bottom, see a meeting of two of the kings of schlock, Lewis and Troma Entertainment co-founder/The Toxic Avenger co-creator Lloyd Kaufman, in which Lewis explains the business of show business for any aspiring filmmakers and reveals how he managed such a profitable film career.