On this day: The Swiss Guard began guarding the Pope more half a millennium ago. 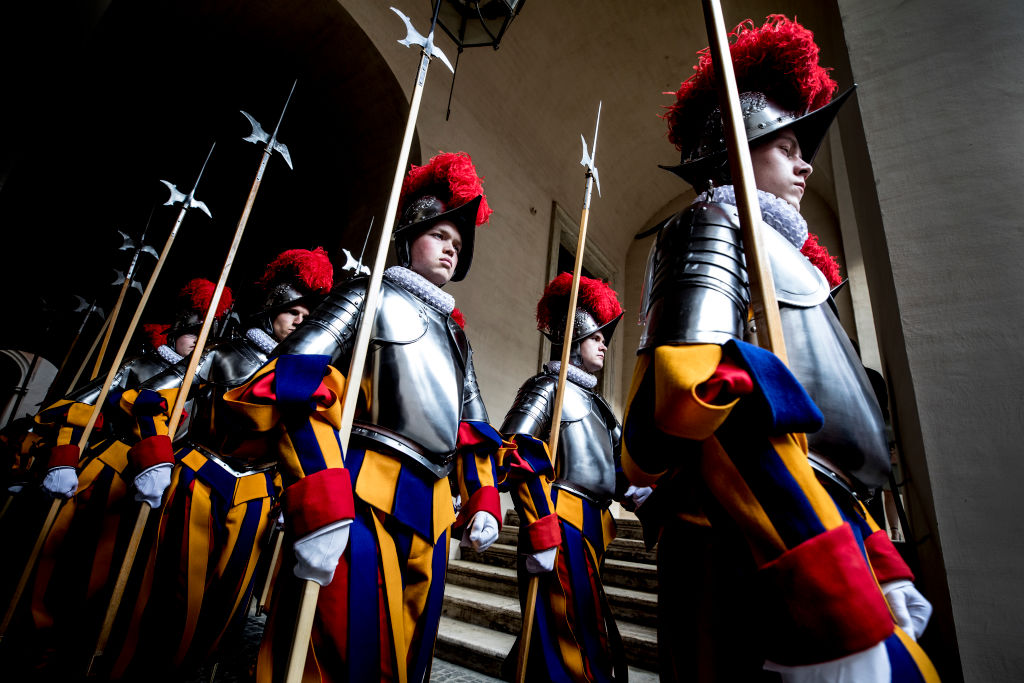 33 new Vatican Swiss Guards recruits prepare to be sworn in during a ceremony at St. Damaso courtyard on May 6, 2018 in Vatican City, Vatican. The annual swearing in ceremony for the New Papal Swiss Guards takes place every year on May 6, commemorating the 147 soldiers who died defending Pope Clement VII on the same day in 1527 during the sack of Rome. (Photo by Alessandra Benedetti - Corbis/Corbis via Getty Images)
Corbis via Getty Images
By Lee Ferran / January 22, 2019 5:00 am

A few things have changed the last 500 years, but for the most part a particularly colorful piece of history has not: the Swiss Guard, the smallest military force on the planet.

Adorned in bright red, blue and gold billowy threads, topped with pointed metallic helmets and armed with spears called halberds, the men who dutifully guard the Pope look as if they’d be more at home in the era of Michelangelo.

That’s because as empires have risen and fallen around the world, the Swiss Guard have mostly remained at their post in Vatican City in Rome since this day all the way back in 1506.

According to the group’s official history, the Swiss Guard first arrived in the Vatican to protect Pope Julius II on Jan. 22, 1506. There were 150 of them, led by Capt. Kaspar of Silenen in the Canton of Uri.

“The Pope’s choice to hire Swiss mercenaries was no accident,” according to the group’s history. “The Swiss soldiers had a reputation of being invincible thanks to their courage, their noble intentions and their proverbial loyalty.”

Though now more likely to help a tourist than lead a charge into battle, in the early days the Guard saw brutal combat—like during the sacking of Rome in 1527. Then a mercenary army fighting for Germany invaded and tore through the ancient city.

“The air in the city was filled with the prayers of desperate citizens, beseeching God to prevent a German victory,” reads a look back at the bloody battle by the German magazine Der Spiegel. “But heaven did not intervene…”

By early morning thousands of invaders had broken through Rome’s defenses and made their way to the Vatican. There they met a small contingent of Swiss Guards—only 189 men along with some Roman fighters.

“The Pontifical Swiss Guard which had assembled near the obelisk… and the few Roman troops fought a futile battle,” the Guard history says. “The commander, Kaspar Roist, was wounded and later brutally massacred in the quarters by the [mercenaries], right before the eyes of his wife, Elizabeth Klingler.”

Of the 189 guards, 42 survived the attack. But they bought enough time for then-Pope Clement VII to make a run for it “through a secret escape passage,” though he later surrendered.

The sacking of Rome lasted eight days and is estimated to have cost up to 10,000 lives.

Today, new recruits for the Swiss Guard are sworn in in early May, to commemorate the invasion and honor all the soldiers who died so many generations before.

Half a millennium after the group’s founding, the Guard’s main duty remains to protect the Pope at all costs.

Currently led by Col. Chrisoph Graf, 57, the Guard is made up of around 125 soldiers who meet the following minimum criteria: they’re men, they’re practicing Catholics, they’re of Swiss nationality and military training and they’re under 30 years old.

The military training is real, and as colorful as the Swiss Guard uniforms are, they’re said to be equally as deadly.

“Their nine-foot steel pikes and whimsical striped uniforms may look good in vacation photos, but according to the Vatican, the troops in the world’s smallest army are trained annually in both throwing and stabbing with the weapon, should they need to protect the pope,” the Daily Beast wrote in 2014. “Many are specially trained martial artists and marksmen whose military arsenal includes a vast array of lethal concealed weapons that extend far beyond their pikes and pointed metal helmets. They also vow to give their lives to protect their boss.”

They’re equipped with modern firearms and face modern threats. The terror group ISIS has called for attacks on Rome and the Vatican.

“Perhaps it is only a matter of time before an attack like that happens in Rome,” Graf said in 2017. “But we are ready also for this.”

In the meantime, the Guard is trying to modernize in other, more curious ways—like replacing their iconic metal helmets with 3-D printed plastic ones.

In May 2018 the Guard showed off a prototype helmet, designed by a Swiss engineer, that mimics the metallic look but is far more comfortable.

“We have to move with the times,” Graf reportedly said of the new headgear. Even if it takes 500 years.