When American agents Philip Olivares and Jim Vandivier boarded the famed Orient Express in central Europe in the 1950s, they kept a closer eye on their luggage than most of the other passengers. And for good reason: inside their bags were some of America’s closely held secrets and communications.

If those contents fell into the wrong hands, it would have been a devastating blow to U.S. interests during the heart of the Cold War.

And on one fateful journey, they came dangerously close to finding out how devastating — when they came face-to-face with their Russian counterparts.

Olivares and Vandivier were officers in the State Department’s Diplomatic Courier Service, the dozens of men who traveled the world ferrying classified items in diplomatic pouches from one U.S. embassy or consulate to another.

“Top secret wasn’t always something that was written. In those days before the technology we have today, we had to have code machines, equipment that was highly classified,” another former courier, James Verreos, said in a State Department video released this year.

The couriers didn’t know what was in the pouches. Their only mission was to get them where they needed to go and ensure that no one intercepted them on the way. That’s why Olivares was so concerned when the two couriers happened upon their Soviet counterparts in the Vienna train station.

“I remember Jim Vandivier and I got off the train with our pouches,” Olivares said. “There was quite a load. We pulled over one of these baggage cars that was already half loaded, the porters said, and there were Russian pouches on that.

“There were two Russian couriers. So here were the four of us. He’s got the pouches, watching our own bags. There was only one baggage car. We tried to get a separate one, but they said no, and that was it.”

With no recourse, the Americans and the Russians eyed each other warily, watching the secrets of the Cold War foes literally piled on top of each other in a baggage cart.

“I thought how ironic—the four of us in this situation,” Olivares said.

Luckily there wasn’t any mischief and the incident went down as just one of countless near misses recounted by couriers as part of the State Department’s recognition of the service’s centennial anniversary.

The Department of State Diplomatic Courier Service began in 1918 at the end of the First World War. 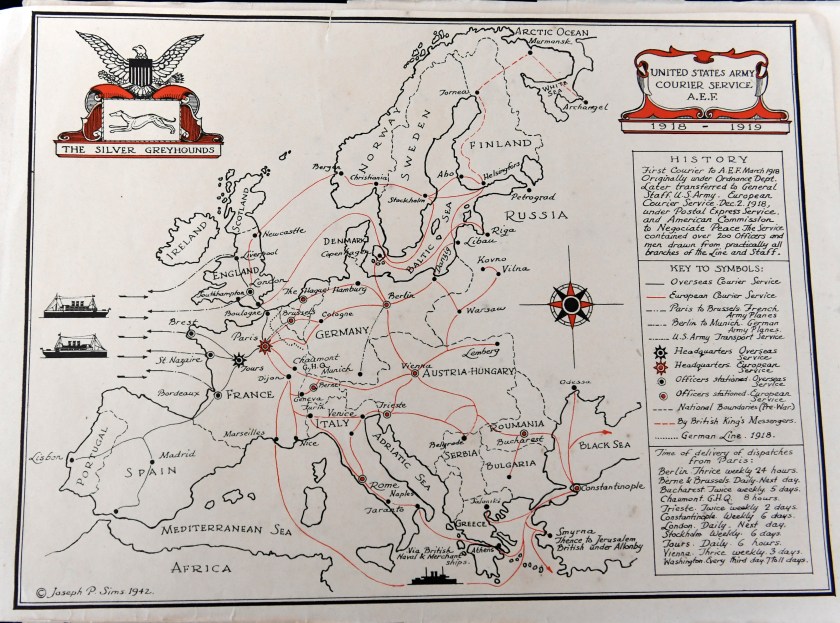 Originally made up of a small group of military officers who called themselves the “Silver Greyhounds,” the service has since grown to more than 100 civilian officials who travel to the farthest reaches of the world, bearing untold secrets with them. (The State Department estimates that in a 20-year career, a courier will travel more than six million miles – equivalent to 25 round-trip journeys to the moon.)

Even in the modern world of encrypted email and messaging, some of the U.S. government’s most sensitive communiques and other items – including historical documents and drugs, apparently – are carried by hand.

In the 100-year history of the service, couriers “used military aircraft, ocean liners, buses, trains, horses – whatever mode of transportation was available – to complete their crucial mission,” the State Department says.

Several former couriers described one of the most exciting and famous journeys in the service – the long, winding mountain road through the Khyber Pass that separates Afghanistan and Pakistan.

“During my tour, they always went by car, and there was always danger – flashfloods and bandits,” a former courier, only identified by the State Department as Ms. Dunn, said of her trip in the 1970s. 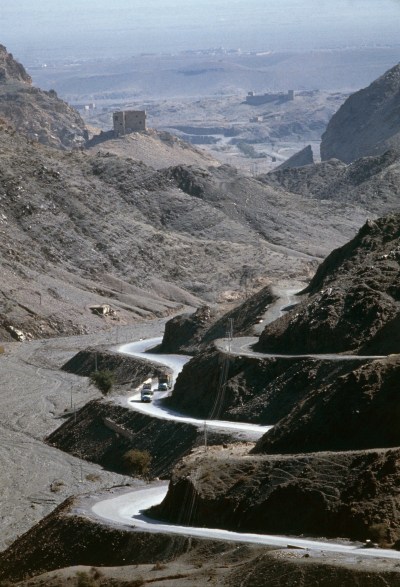 The Khyber pass, between Pakistan and Afghanistan.
De Agostini via Getty Images

“The embassy had a specially built Ford,” Verreos, who also worked on that route, said. “By using the motor of the car as a power source, they had lathes and welding apparatus to repair the axles that would be broken on the trip to Kabul.”

“The road was bumpy and dusty. And I looked to the right as we were driving along and, oh my gosh, we were thousands of feet above any ground down there,” said courier JoAnn Dieckman. “And I thought, ‘Oh, there’s no barricade or fence or lines in the road or anything.’ So, we just had to count on the driver. Well, he did this for a living, so we hoped that he remembered how to do it all. The mountains were absolutely wonderful. They were so high and so beautiful.”

For all the adventure, the dangers of the job were very real.

Six members of the courier service have died in the line of duty – each of them in plane crashes.

The most recent, Seth Foti, died on Aug. 23, 2000 in Manama, Bahrain, when the aircraft he was a passenger on crashed during landing.

Over the last century, the State Department says only a single official shipment has every been lost in transit: a baby grand piano.

After WWI the piano was making its way from Trieste, Italy to Istanbul, Turkey under the care of courier David Bruce for a U.S.-sponsored YMCA performance. According to Bruce’s official report, at the last leg of the arduous journey in Bulgaria, Bruce let some locals play the piano while they waited on the train station platform, after which he decided to grab some sleep underneath it.

He later “awoke to discover the piano had literally vanished from right atop him,” the State Department reported.