Everlane just released its first men’s suit. We took it for a test run. 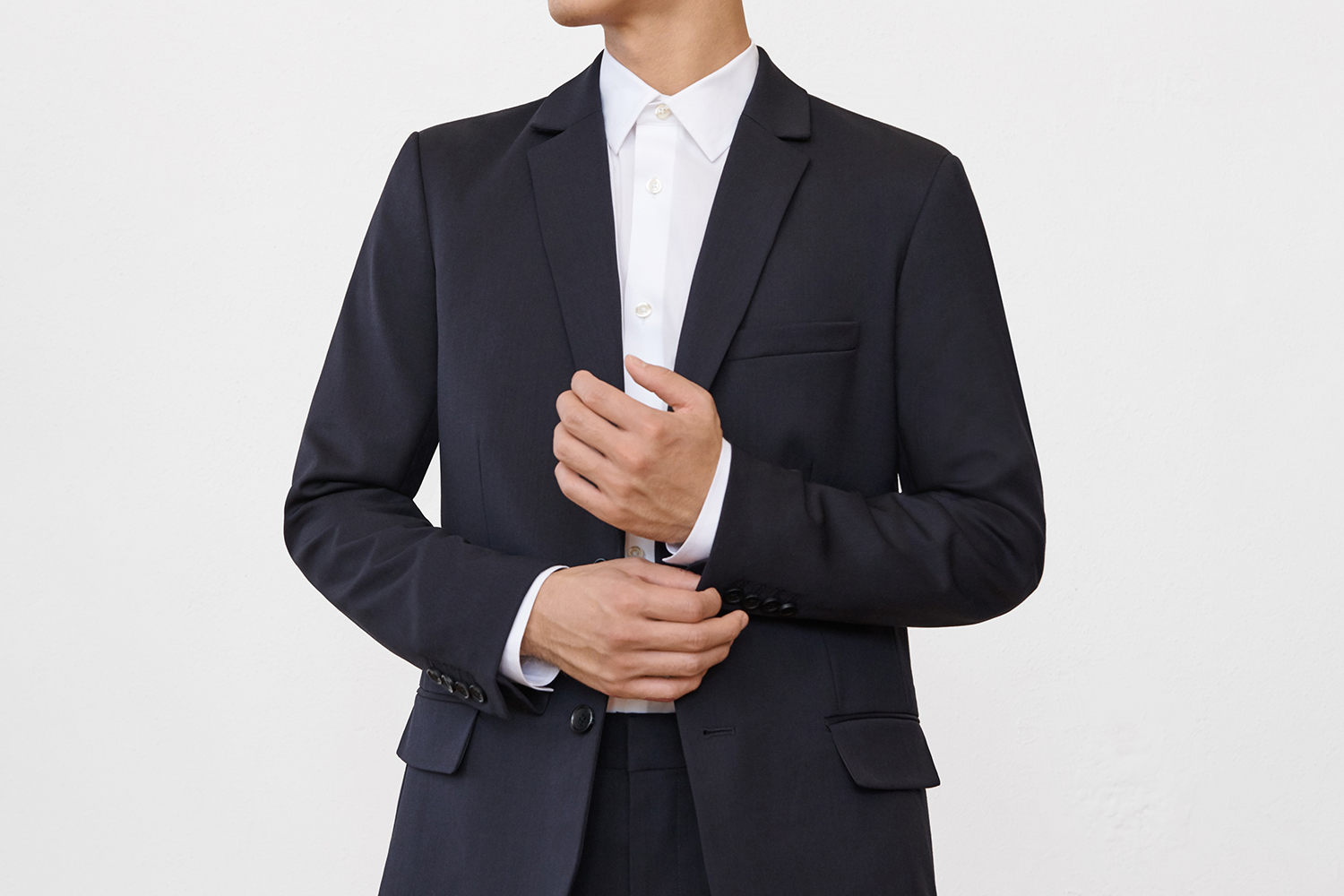 Everlane released a direct-to-consumer men's suit just in time for holiday party season. Should you buy it?
Everlane
By Alex Lauer / November 13, 2019 2:07 pm

Bedsheets, suitcases, T-shirts — these are items we’re happy to order online sight unseen from direct-to-consumer companies, to the chagrin of traditional retailers. But the men’s suit, that is something you should not click-and-ship to your front door. At least, that was one of our rules before we tested the $300 Italian Wool Suit from Everlane.

Yes, we were just as surprised as you when we heard, but this isn’t a gimmick. Everlane is now offering both a suit jacket and trousers, in charcoal or navy, made from wool sourced “from a storied Italian mill” for a smidge under $300. While the brand has proven itself in all manner of basics, this is a different sartorial beast entirely. The big question: can it be any good?

I got my hands on a navy suit, and then did what Everlane suggested: they’re releasing this just in time for the holiday season as a party agnostic option, so I took it out for two separate nights to get a real feel for it, for a couple brandy old-fashioneds and jazz one night and for the first preview of the Guthrie Theater’s A Christmas Carol another. (That’s right, I started the festivities much too early in the name of journalistic integrity.)

The ultimate reason for not ordering a suit online is that there is about a zero percent chance it will fit you perfectly. But even more generally than the personal fit, in terms of hems and cuffs and shoulders, is style — is it slim, skinny, classic, wide? And that is equally impossible to suss out through a screen.

However, Everlane describes its Italian Wool Suit as a “modern slim fit.” In their words: “Neither fashion-tight nor department-store boxy, our suit is based on our best-selling slim fit.” That may scare some of you who, like me, are fans of timeless, straight man’s man suits that won’t draw attention, but won’t go out of fashion, either. When I slipped this on I could immediately feel the tightness of the trousers around my calves, and not being accustomed to the fit, I worried it might be the end. But when I asked my girlfriend to take a look, she whistled. And she was right — after a few minutes of wear, it proved to be a Goldilocksian fit.

I don’t want to oversell this because everyone’s body is different, but after consulting with Everlane’s proprietary size guide, and comparing that with my other suits, the pants and jacket miraculously showed up fitting just about perfectly. (For those interested in ordering, you can also email fit@everlane.com to ask any questions.) I might have to bring up the hem on the pants a little, but honestly, that’s it. So if you’re in the middle 80% of height and weight, you may not only be able to skip trying on suits in a store, you may be able to skip a trip to the tailor, too.

While Everlane is known for its radical transparency, the brand doesn’t say what “storied Italian mill” it is sourcing its wool from. But that’s almost beside the point because, at this price point, it’s obviously not the crème de la crème. But it’s sleek, it breathes, with help from a 100% recycled polyester liner, and according to them it’s machine washable. But that is one rule we’ll gladly fight them on: do not wash your suits, this one or any other one. (But also don’t dry clean them too often, either.)

Part of the reason the suit is so affordable is because the garment itself is not made in Italy, but in Vietnam, where much of Everlane’s clothes are made. That’s not to say the construction is lesser because of it, but it’s important to point out. Another reason is something that’s harder to sum up, but those who have a section of their closet devoted to suits will notice immediately, and that’s the details. The trouser clasps are simple, the back pockets don’t button, there is less reinforcement than more expensive suits — in the waist, hems, pockets. But it’s also hundreds, even thousands of dollars less than those suits.

Also, I should mention that from an outsider’s perspective, no one will be able to tell you only paid $300 for the getup. At A Christmas Carol, I happened to run into a couple older friends of mine, the kind of people who own getaways in both the south of France and Sicily, and after a few surprised moments of greeting, one complimented my suit. I told her it was new from Everlane. “Hmm, Everlane? I’ve never heard of it.”

You should never buy a fast-fashion suit. It’s bad for the workers, bad for the environment and, most of all, bad for your reputation. But what Everlane has delivered in its Italian Wool Suit, belying its $300 price tag, is not that. It takes the arguably outdated model of the classic men’s suit — an understated wool in navy or grey — and modernizes it in both fit and shopping experience. Please don’t be afraid to bring it to a tailor to get it just right, though.

Of course, if you’re used to wearing thousand-dollar three-pieces with monogramming and customized lining, this is certainly not the suit for you. But if you need something new in a pinch, or are looking to add a second option for your packed slate of holiday gatherings, or maybe you just need a suit, period (though we do hope your closet isn’t that dire) — it’s hard to think of a better deal than what Everlane has gifted us.

A socially distant vacation is a getaway from the stresses of daily life, but also potentially dangerous crowds. Learn how... more

These J.Crew Sunglasses Are Only $26

Sunnies that won't break the bank

During lockdown, Flaviar has opened up its online school to non-members for free

OXO Is Throwing a Big Sale on Our Favorite Essential Hack

These containers will change your life, or at least your pantry