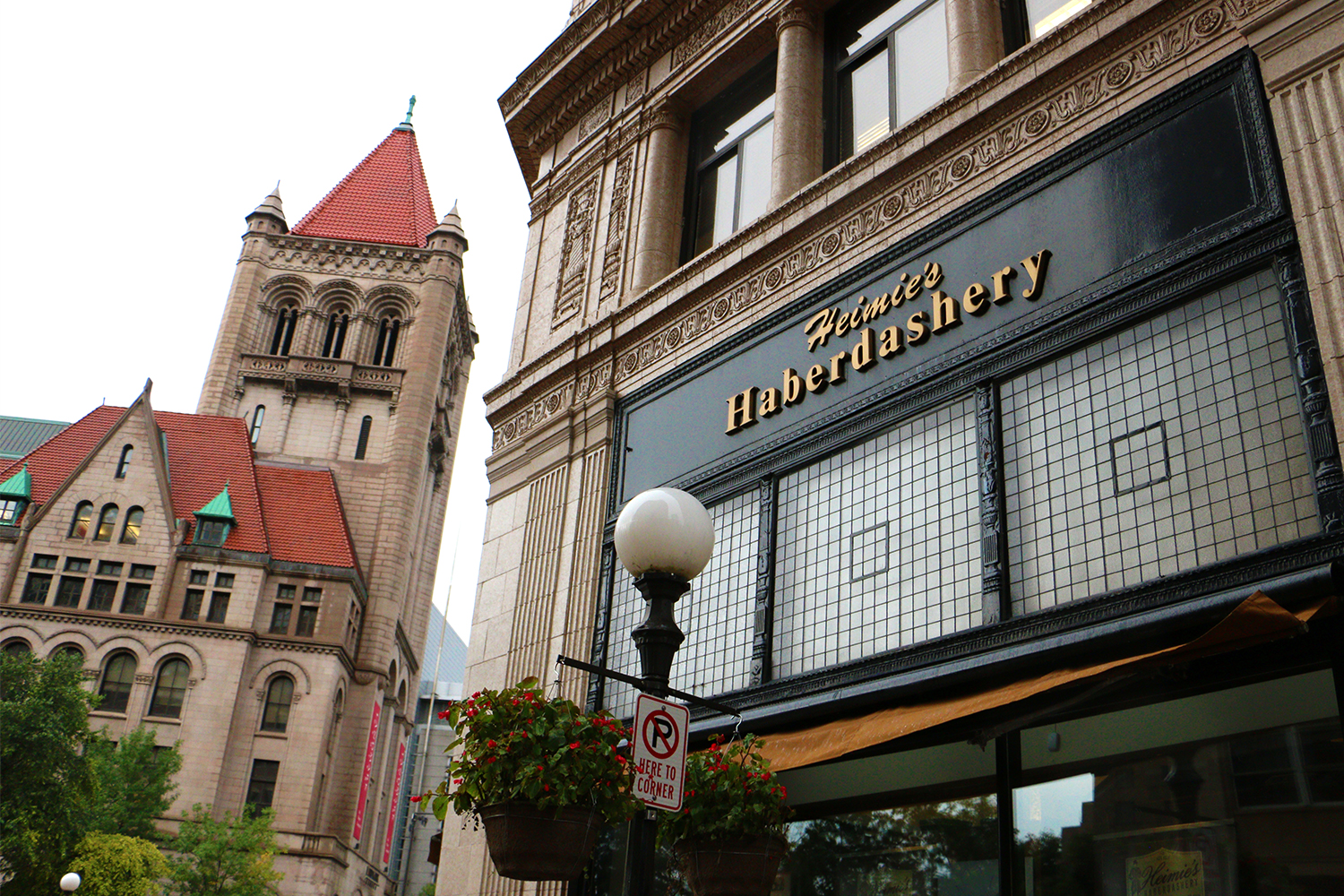 Despite its founding close to a century ago, Heimie's Haberdashery is still the best kept secret in Minnesota.
Alex Lauer
By Alex Lauer / September 19, 2019 9:27 am

The decline of brick-and-mortar stores is undeniable, but its severity changes with each industry. Some shopping, it turns out, doesn’t translate well to the online experience. Other shopping has been able to adapt. Menswear stores, for their part, are certainly not going down without a fight.

There’s a good chance you’ve sipped a pour-over coffee or Old Fashioned while buying clothes in the last year. Maybe you’ve also been the recipient of a straight-razor shave or a much needed shoe-shine via an in-store pop-up. Or maybe instead of hitting happy hour after work, you strolled through racks of clothes to attend a fly-fishing workshop or panel discussion on Japanese whisky. The experiential side of the whole “shopping experience” has been making a comeback in coastal cities in recent years, but there is one place — up north in St. Paul, Minnesota — where it never left.

That mission is made clear when you walk through Landmark Plaza in the heart of downtown. You’ll see the full name of the shop on the facade of the historic Hamm Building is actually Heimie’s Haberdashery. But as Anthony Andler, the current owner and great-grandson of the founder tells InsideHook, he’s been going without the “haberdashery” for a while.

“When I first got into business, using the word ‘haberdashery’ was a way for me to connect the old with the new again, with my heritage and my grandfather and what they did,” says Andler. “Now, you see other people using the term. And so what I did last year is I started using all of our logo work just as Heimie’s and I dropped the ‘Haberdashery’ because I said, ‘Okay, if everybody else is going to use Kleenex to wipe their nose, you better not call it a Kleenex, because Kleenex is a brand.’”

The brand Andler wants to be associated with is Heimie’s, plain and simple. Though as we sat down upstairs to talk over coffee (which you can also drink while shopping) with a pool table to the right and a six-foot hunting scene to the left, the brand experience is anything but plain. And the story of the shop — from its 1921 founding to its recent expansion — is anything but simple.

While Heimie Andler, a Russian-Jewish immigrant and Anthony’s great-grandfather, set up shop nearly a century ago, eventually expanding the tailoring and retail business with his son Ralph, the store has not had a continuous run.

Everybody deserves to create their own story, but you can’t manufacture it.

“What happened is, I was too young to take responsibility for a store that my grandpa had and his grandpa had and his dad had,” says Andler. “I just wasn’t ready at that time, so my grandpa sold the store and it closed down for 13 years.” Meanwhile, Anthony went to film school and tried to make it in that business. “After I figured out that I wasn’t a Tom Cruise and I wasn’t a Brad Pitt, I had to go back to doing what I knew how to do that made me money, and that was using my hands. So I started a bag business and I worked at that for 30 years. It takes a long time.”

Eventually, he made his way back and reopened Heimie’s in 2004. But unlike brands that have jumped on the bandwagon of “heritage” gear in recent years, Andler had apprenticed under his grandfather and was able to bring all of that knowledge to the store, essentially reopening as if nothing had changed. Heritage, for Heimie’s, isn’t a buzzword or trend, but a spirit imbued in everything, from timeless Harris Tweed sports coats to tailored pants made of newer performance fabrics. And 15 years after reopening, Andler is continuing the growth of his forefathers — recently expanding into the adjacent space and increasing his offerings.

When I ask Andler — who is dressed impeccably in a vest, golden striped tie and spotless white shirt with sleeve garters, mallard cufflinks and monogramming — about the “heritage” trend, he understands it, but doesn’t believe every brand can live up to it.

“Everybody deserves to create their own story, but you can’t manufacture it,” he says. “I got lucky in the sense that I came from my grandfather showing me how to make and sew things together, his father showed him over 200 years worth of sense-memory hand skills that were handed down from generation to generation. You talk about the Russian-Jewish lineage and all those immigrants that came to America that had a hand skill … They were the ones who were expanding the West with all these Jewish shops that were popping up in South Dakota on every corner.”

So what does Heimie’s offer now? The term haberdashery conjures images of stores that no longer exist outside the pages of Hemingway and Fitzgerald (the latter being particularly apt, as the author was born in St. Paul). They’re the one-stop shops of yore, before that term was co-opted by Walmart and Target, and Heimie’s offers everything they once did, and more.

First, there’s the menswear component, which will dress you cap-à-pie: shoes, socks, pants, shirts, coats. Then there are the accessories and accoutrement, which run the gamut from cigars and canes to eyewear. Walking through the space, you’ll also come across various services on offer, including a full-service barbershop, shoe-shine station, wedding department, as well as custom and tailored clothing. And with the new expansion, you’ll find a gun library, fly fishing station with hand-tied flies, an expanded custom clothing area for both men and women, and even a professional recording studio. When I met Andler, I found him there discussing plans for a podcast.

In other words, you can take care of all your wardrobe buying needs in one place. Or you could simply get a shoe shine. (“I get cops that come in here that just need to decompress,” says Andler. “They come in for a shoe shine and to … sit and talk to somebody, and then they feel better and they leave. It happens every day.”) Or you could just come in and ask for the advice of Andler (or any of the other experts on staff) and not buy a thing.

“I’m here to listen and learn. I’m not here to sell you stuff. I’m here to sell you the things that you need that’ll help express that inner self,” he says. That includes helping you elevate your style, but it also includes answering the sartorial questions that you should be asking an expert, not some anonymous stranger on Google or Reddit.

In the end, it’s not just that kind of expertise, the breadth of offerings or the competitive pricing (which contradicts the elegantly dressed gentleman on the welcome mat) that makes Heimie’s worth visiting. And it’s not the time warp to a “better era,” either. (Though Andler admits he purposefully creates vignettes throughout the store to transport customers.) It’s the shop’s wholly unique experience, where heritage is a lifelong process, not a trend, and the trappings of classic menswear exist in conversation with, rather than opposed to, contemporary style.

When I ask what’s the one thing people should do if they make a pilgrimage to the store, Andler relates a story about the time musician Ben Harper stopped in before a performance at the Palace Theatre.

“He was wearing his iconic hat that he always wears, and he bought another hat. And what he said to me is: ‘This reminds me of my mom and dad’s music store.’ It conjured up a whole bunch of feelings and emotions for him,” he says. “What I would say to people, from him all the way to somebody traveling through, is that I want people to just walk into the environment and let themselves move through the store and experience it. You don’t have to buy anything … just move through the store and experience it.”

If you’re going to be in the Twin Cities area on Friday, September 27th, Heimie’s is throwing a Grand Expansion Opening part from 6-9 p.m. with music, drinks and food. Find more info on their Facebook page: https://www.facebook.com/HeimiesHaberdashery