Weekend Discussion: Is “Field of Dreams” the Best Sports Movie of All-Time? 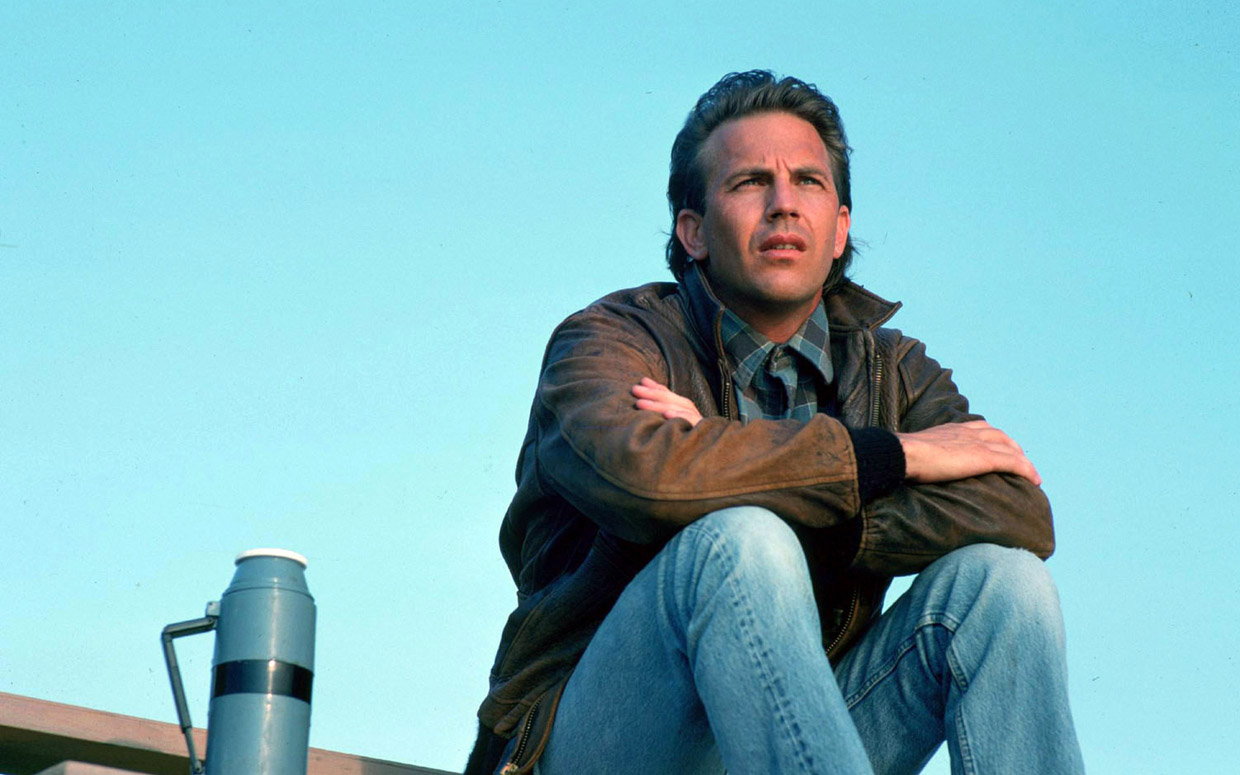 Thirty years have passed since Ray Kinsella walked onto a plot of exceptionally valuable Iowa cornfield and plowed it under — giving the ghosts of the 1919 Chicago White Sox, Archibald “Moonlight” Graham and John Kinsella (not coincidentally, the long-dead father of Costner’s character) one last chance to play ball.

Of course, Kinsella was a fictional character, and the movie Kevin Costner played him in, 1989’s Field of Dreams, was one of a number of ’80s films that used baseball as a metaphor for the American experience throughout the decade. 1988’s Eight Men Out can be seen as a film that’s as much about institutional corruption as it is the tale of the Black Sox scandal; that same year’s Bull Durham, which also starring Costner, held up a lens to small-town ennui. Major League, which came out around the same time as Field of Dreams, is its tonal opposite, a hilarious look at inept ownership.

Field of Dreams has aged better than many of its contemporaries, even if Terence Mann (the reclusive J.D. Salinger stand-in played by James Earl Jones), impassioned call to return to a simpler time, before the million-dollar contracts, now seems painfully quaint as we enter the era of billion-dollar athletes. The world has changed, and baseball with it; ask a 10-year-old to name his favorite sport, and he might say baseball — or soccer, basketball or video games. Every season sees a new article on how some other sport is the new American Pastime.

Field of Dreams is corny and open-hearted; it wears its spirituality and its (liberal) politics on its sleeve. It believes: in America, in sacrifice, in love. In these disillusioned and disillusioning times, it is now a reminder of a time when baseball stood for them all — and an open question as to what might stand for them in the years to come.

Your take on where Field of Dreams fits in the pantheon of sports movies depends on whether you consider it a sports movie at all — or if, like Costner, you saw it in the tradition of inspiration-minded Americana like It’s a Wonderful Life. Here, InsideHook staff writer Diane Rommel and Brandon Lilly, who covers college basketball for The Athletic, debate its rightful place.

Diane: Tell my why I’m wrong: Field of Dreams is the best sports movie of all time.

Diane: I need you to go way farther than that.

Brandon: It ends well. It’s another sports movie that ends well, with Kevin Costner playing catch with his dad, and all the lights of the car of the people driving to see it.

Brandon: The best of all of them, of course, is Rocky, where you just hear in the background that he lost.

Diane: And don’t forget Talia Shire wandering through the crowd in her red beret.

Diane: Because Boobie Miles does get hurt.

Brandon: Boobie Miles does get hurt. And Odessa-Permian doesn’t win the state title. But if you wanted to, you could package two or three episodes of the show together, and call it the best sports movie ever made.

Diane: Which episodes? Definitely the first one.

Diane: The episode where Coach gives it all up for Tami? The last episode is perfect.

Diane: So because a highlights reel from a TV show doesn’t count, let’s return to the original point. Field of Dreams has everything. Kevin Costner playing catch with his dad. Amy Madigan as his town-hall activist wife, who trusts and believes in him. The pushback against ’80s conservatism. Battling against those bastards at the banks. And Terence Mann — Terence Mann walks into the goddamn cornfield to tell us what heaven’s like. I’m crying.

Brandon: I get it. It’s a baseball movie crossed with a Mellencamp song. But The Natural is a better movie.

Diane: The Natural is not a better movie.

Diane: Are you sure you’re doing the math right?

Diane: He’s a 48-year-old man playing both a mid-thirties rookie and that character as a just-out-high-school pitcher. This strains credibility.

Brandon: Even a past-his-prime baseball player is not 48 years old, or 47-ish when he was making that movie. Robert Redford was way too old to be playing Roy Hobbs. That being said, The Natural was the perfect movie.

Diane: I feel like this is 90 percent a product of your obsession with Barbara Hershey.

Brandon: There’s no list of sports of movies that can be taken seriously if it does not have The Natural on it. Even if he is way too old.

Diane: Anything to add about how a silver bullet has destroyed his stomach lining, which somehow makes him bleed through his uniform in the big game? This is not medically possible.

Brandon: One of the things it does really well is tell an individual story about a team sport. You have something like Major League. Major League is definitely not as good as Field of Dreams. I love Major League, but that’s a different kind of movie.

It’s really hard to do team stories because you need a central character — it’s easy to do with a sport like boxing or cycling. Individual stories in a team setting are not — which is another reason The Natural is a miracle.

Brandon: When’s the last time you saw The Natural?

Diane [two hours and eighteen minutes later]: So the part where he’s talking to Glenn Close about how his life didn’t turn out the way he expected it to, that’s pretty good. Wilford Brimley’s great. And Richard Farnsworth, as the assistant coach. But literally every movie we’ve talked about is better, and Rudy, too.

Brandon: Rocky may be better. And Creed. I love Michael B. Jordan and Sylvester Stallone in that movie. The thing about Rocky is that it got a little bumpy in the middle, but you don’t have Creed if you don’t have Rocky IV. And Creed’s terrific.

Diane: To what degree is this shaded by the fact that you’re from Philadelphia?

Brandon: That movie is horrible. [Note: Despite growing up near Philadelphia, Brandon is a Patriots fans.]

Diane: I saw that movie two nights before the Super Bowl and I remember it as being absolutely perfect. What about Million Dollar Baby?

Brandon: Million Dollar Baby is a fantastic sports movie for about an hour and a half, and then it turns into a melodrama about assisted suicide. And you’re like, I know where this is going, and I know that getting there is going to take forever. At the same time, the parts where Hilary Swank is turning herself into a boxer are great, Morgan Freeman is great, Clint Eastwood is great for about an hour. But once that girl sucker-punches her, that movies falls apart quickly.

Diane: What about The Boxer?

Brandon: The Daniel Day-Lewis one?

Brandon: The Mark Wahlberg one?

Diane: I mean — what’s the Mickey Rourke one? Oh — The Wrestler!

Brandon: That is … not a great sports movie. But it’s good at showing the underside of athletics. This is not the glamorous side — this is guys beating the bushes. So I’d say it’s a very good movie that’s not about sports. It’s about a guy who’s sorta famous, trying to reconnect with his daughter, trying to figure out how to live his life.

Diane: This is part of your whole weird thing about wrestling.

Brandon: I hold wrestlers in less esteem than any other athletes.

Brandon: Golfers are at least competing.

Diane: Can I just remind you of Terence Mann walking into heaven. To this day I forget he’s not a real character. People are like, “Who’s that sort of avant-garde playwright from the ’60s?” and I’m like, “Terence Mann?” and they’re like, “Uh, I was thinking of Samuel Beckett.”

Brandon: It’s a good movie. But let’s remember the central character is not an athlete. It’s about baseball but it’s — I don’t know, I like Field of Dreams, it just doesn’t — like Bull Durham is a sports movie. A League of Their Own, that’s a sports movie.

Diane: So you’re saying Field of Dreams isn’t actually a sports movie. That’s ridiculous. It’s Ray Kinsella against all the jerks! And time’s dominion over us all!

Brandon: It’s about being a fan. I will put it in the pantheon of sports movies because it’s absolutely about baseball — like, it couldn’t be about math. It’s about America and its connection with baseball, its adoration of baseball.

Diane: That speech that Terence Mann makes about the primacy of baseball, I want that to be true, even if it doesn’t feel that way today.

Brandon: The thing about baseball is that no sport holds the cultural landscape the way that baseball held it in the ’50s and ’60s. Football is the closest to it, but no sport holds it like baseball did. With baseball today, there are three essential issues, and none of them reflect well on the fanbase. Number one is the money — it’s gotten to the point that fans resent the players for the money that they make.

Diane: Easy fix. Just make all tickets to all games $10. The owners are still going to have plenty of money. But I don’t mind if they’re hundred-millionaires, rather than billionaires.

Brandon: Number two, the sport has gotten extraordinarily Latin. There are a lot of players from Puerto Rico, the Dominican Republic, Colombia, Venezuela, and it’s gotten to the point where it doesn’t feel as “United States American.” Fans of the English Premier League are familiar with this. It’s fair enough if the best players are coming from those areas, but it diminishes fans’ connection to the team. And the third thing is of course free agency and the way players move around all the time.

Diane: I don’t think Field of Dreams would advocate for all these big-money deals, even if it means Bryce Harper’s playing for my team this year.

Brandon: He could’ve stayed in D.C. But he chased the money.

Diane: But Field of Dreams isn’t pro that. Field of Dreams is pro the best of America. Backyard ball, Little League, hitting around in the front yard with your dad. Or mom. Or Terence Mann. Or the obnoxious brother-in-law played by Timothy Busfield. Just whoever you love.

[Three days later]
Brandon: We forgot Hoosiers. Just add it to the part about Barbara Hershey, and we’re good.