From Hygge to Còsagach, Coziness Takes a Luxury Turn

The Danes, Germans and Scots are battling over who can be more luxiously comfortable.

For the past few years, there have been new and confusing and sometimes baffling words sneaking into the pop culture vernacular (fleek anyone?) with hygge topping many lists.

From books to clothes to food to home furnishings hygge (pronounced hoo-geh), the Danish concept of cozy has slowly been seeping into our lives. But what exactly is hygge anyway, and why has it grabbed hold onto our collective psyche?

Many of us first encountered hygge in a December 2016 article in The New York Times titled “Move Over, Marie Kondo: Make Room for the Hygge Hordes.” It was slightly tongue in cheek piece simultaneously laying out the rules of hygge, while poking fun at our ability to briefly embrace singular concepts from other cultures. It also seemed to open up oceans of marketing possibilities as hygge became the It girl of the PR world.

But let’s back up for a minute to the appeal behind the world and concept. Hygge is a Danish word encompassing the feeling of cozy contentment one feels tucked near the crackling fire with a mug of hot chocolate or a perfect glass of wine on a snowy day. Unlike its close German counterpart gemutlichkeit  — which isn’t reliant on seasons to sum up a moment of happiness or cheer– hygge is tied to specific feelings experienced or shared with good friends when it’s cold outside but toasty inside.

Lest you think this feeling of all being right with the world is limited to very specific regions, VisitScotland recently shared their own version of branded cozy with the world in the form of Còsagach, “a Gaelic word with several interrelated meanings,” according to Michael McCuish, VisitScotland’s PR manager for North America.  McCuish cites Am Faclair Beag “which incorporates Edward Dwelly authoritative dictionary of Scottish Gaelic” for providing several definitions of the word ranging from “pertaining to or abounding in small holes/crevices” to “spongy” (oy) to “snug, cozy.”

McCuish explained that in searching for the right word to sum up their own campaign, it was important to recognize “The rich history and cultural importance of Gaelic.” Two words and concepts in particular “Còsagach along with “coorie in” (from the Scottish for nestle or snuggle) were determined to be suitable descriptors which may inspire tourism businesses to embrace and promote the wonderful offering they provide to visitors.” Since coorie in sounds vaguely smutty, I think còsagach was a wise choice indeed.

In a way, it almost feels like Scotland seems determined to out-hygge the Danes. McCuish waxed rhapsodic by explaining “Scotland is a country where còsagach can be achieved in all seasons, but it’s winter when it comes into its own. It’s no secret that Scotland can have, at times, rather harsh and ferocious weather. In the winter when the storms rage and the waves crash against the rocks, there is nothing more satisfying than being curled up in front of the fire, and listening to the weather outside.”

It’s worth noting that neither hygge nor còsagach are considered solitary states, but rather are presented as best shared with friends. In the case of còsagach, McCuish believes “going to a cozy pub and relaxing in a friendly setting, induces feelings of warmth and snugness while enjoying the locally sourced comfort food such as haggis, not forgetting the range of quality craft beers, gins and not forgetting aged single malt whiskeys.” Having spent a fair share of time in Scotland over the years, I can tell you it’s okay to skip the haggis part.

But coziness isn’t limited by language or region, and these days you’re as likely to see hygge and còsagach used to market everything from smart lighting to baby onesies. 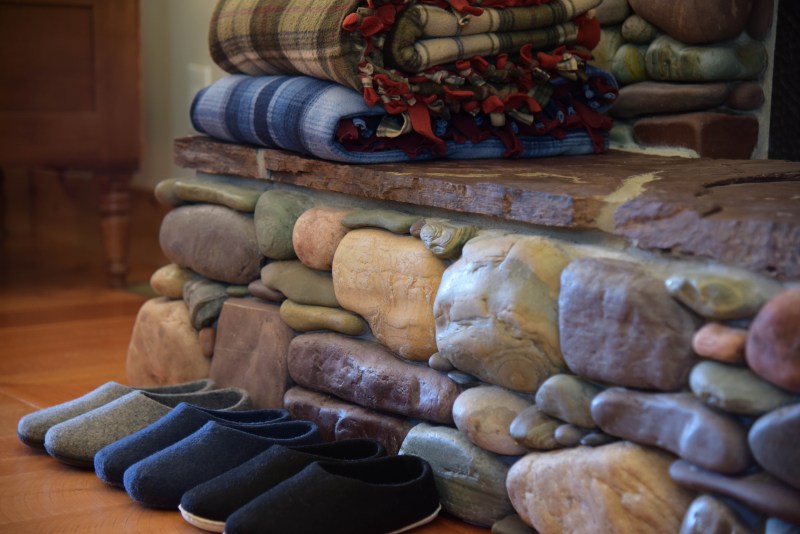 Barclay Saul and Steven Anderson are respectively president and CEO and co-founders of Kyrgies, handcrafted indoor wool shoes described on the site as “hygge house shoes.” Despite being inspired by the craft and people of Kyrgyzstan, on the website their mission states the hygge vibe since “Kyrgies is on a mission to bring comfort, coziness and hygge to your home.”

When asked if the people of Kyrgyzstan share a hygge ethos or if it was matter of coasting on a trend, the two explained “The Kyrgyz people are traditionally nomads, following the seasons with their flocks of sheep. Everything they have including their homes and clothes were made out of wool felt. For a life that hard, that labor intensive, wool felt gives them a sense of comfort and coziness. When you’re a nomad, particularly when your home is a yurt, you want to feel warm when the day is over.” The slippers are an extension of the desired feeling “Kyrgies are part of a tradition that has brought peace of mind and comfort to the Kyrgyz people for literally thousands of years.” And now a brand that creates cozy yurts for your feet are available to the rest of us.

It would seem as though literal nomads and digital nomads need hygge equally, even if they call it by a different name. When I asked the founders of Kyrgies why they thought being cozy is a desired state of being just now, they explained that “Because we are constantly inundated with information, blinking lights, notifications from our phones, our computers, our cars, our TV’s. It’s very hard to focus on any one thing anymore. People want an escape from the stress of constant stimulation. Cozy implies a feeling of peacefulness, and it’s very hard to find that peace in 2018.”

For many, that feeling of peacefulness is something created at home, with the right lighting or off time clothing.

Let’s face it, despite its Danish makeover, being cozy was once synonymous with looking like a slob. And while deep level relaxation once involved sweats and sneakers, the athleisure movement means that even on our off time, most of us can easily upgrade our at home hygge game. “After a long day at work, volunteering, exercising – people are looking for comfortable styles to wear at home,” said Victoria Vandagriff, president of leisure wear manufacturer Delta Galil Women’s division.

In the past few years, hygge style has evolved from couch potato couture to everyday dressing. According to Vandagriff, dressing this way embodies a lifestyle. “It’s a modern approach to living healthy, eating right and fitting exercise into their daily routine. Social media has had a large impact on growing this movement. With ecommerce and ‘like to buy’ options from every brand – online, stylish, and innovative fitness wear is available to everyone regardless of where they live. The innovations in fabric have allowed for new designs that are modern and appropriate for many lifestyle situations that have become more casual. Men and women are living busy and engaged lifestyles; this allows them the ease to go from work, to the gym, yoga or meditation studio fashionably.”

The changing trend is especially true for men. “In men’s loungewear the trend is no longer #streettosleep but now, it’s #boardroomtobedroom” David Rozschild,  creative director for the men’s division of Delta Galil who count Lacoste among their brands. He added, “We call it the #sloungewear effect.”

Hygge and its newer offshoots keep striking a cord. But then again, so did the yoga craze that came before.

Kyrgies Saul and Anderson don’t think the two are all that different “Yoga culture is about observing your breath, centering yourself, canceling the noise that surrounds us all every day. Hygge shares precisely those characteristics.”

And one of the reasons we love all these concepts of coziness is because at their core they share the same ideals Saul and Anderson put it this way: “The idea is to stop your mind from racing all the time. Put down the phone. Inhale and exhale.”