SAN ANTONIO, TX - 1997: Tim Duncan of the San Antonio Spurs during a portrait shoot in San Antonio, Texas. NOTE TO USER: User expressly acknowledges that, by downloading and or using this photograph, User is consenting to the terms and conditions of the Getty Images License agreement. Mandatory Copyright Notice: Copyright 1997 NBAE (Photo by Glenn James/NBAE via Getty Images)
By Sean Cunningham 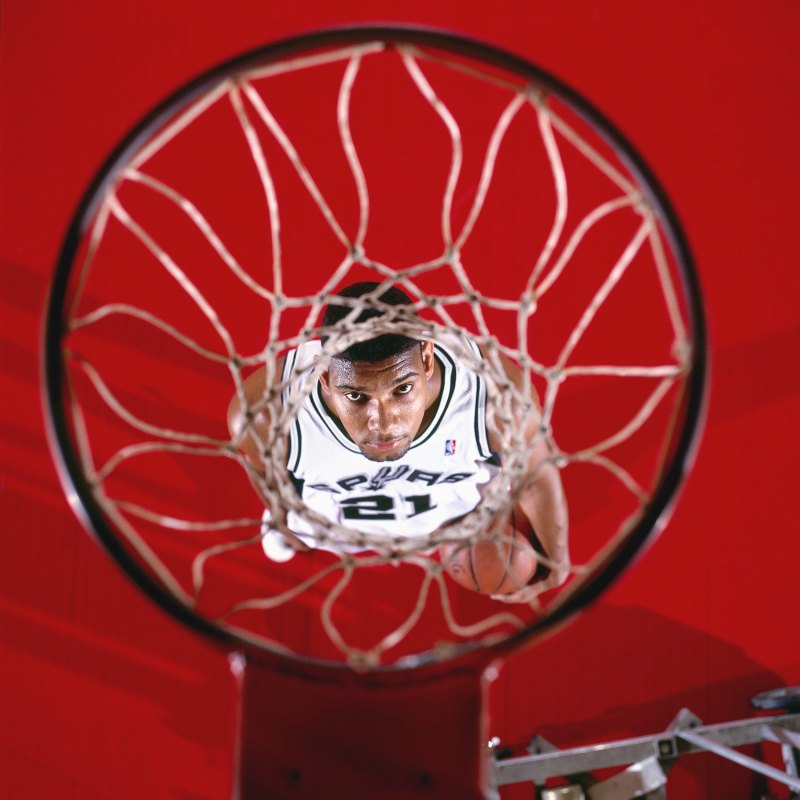 It can be argued that Tim Duncan is the best draft pick in NBA history. It goes beyond titles (Duncan won five) and MVPs (two regular season and three in the Finals). Over his 19-year career, Duncan never played fewer than 50 games (he did that in 1998-99, when he started every game in the strike-shortened season) and his Spurs never missed the playoffs. By choosing Duncan, San Antonio brought themselves nearly two decades of uninterrupted, controversy-free success, entering each season knowing they could count on Timmy.

An intensely private man, here’s a quick look at the just retired future Hall of Famer who has often been overlooked and has no problem with that. 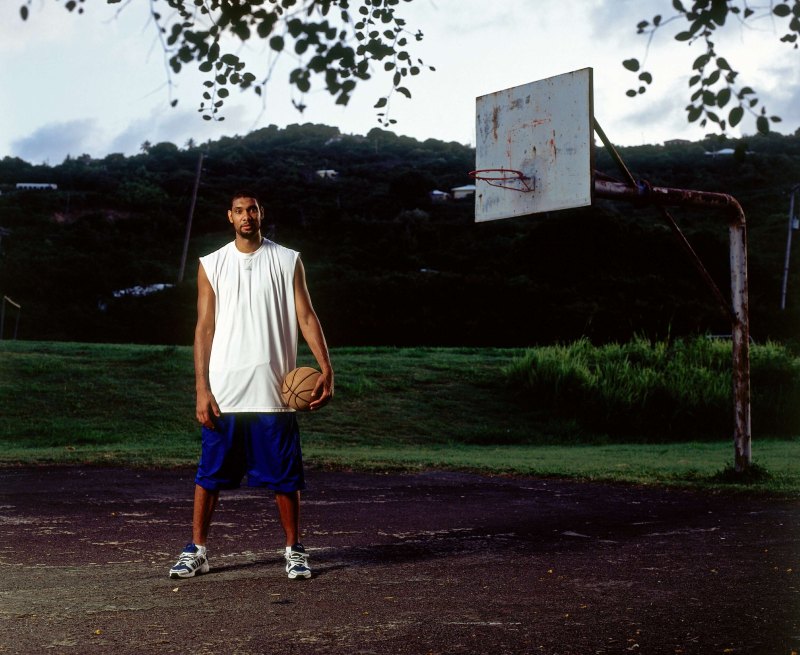 Tim Duncan of the San Antonio Spurs poses for a 2005 photo on the island of St. Croix, US Virgin Islands where he was born. (Nathaniel S. Butler/NBAE via Getty Images)
NBAE/Getty Images

1994: Tim Duncan completes his freshman year at Wake Forest, averaging 9.8 points, 9.6 rebounds, and 3.76 blocks. Arguably, he would have already been the number one draft pick in the NBA had he decided to turn pro. Instead, Duncan plays four years at Wake Forest. (He promised his late mother he would graduate college.) 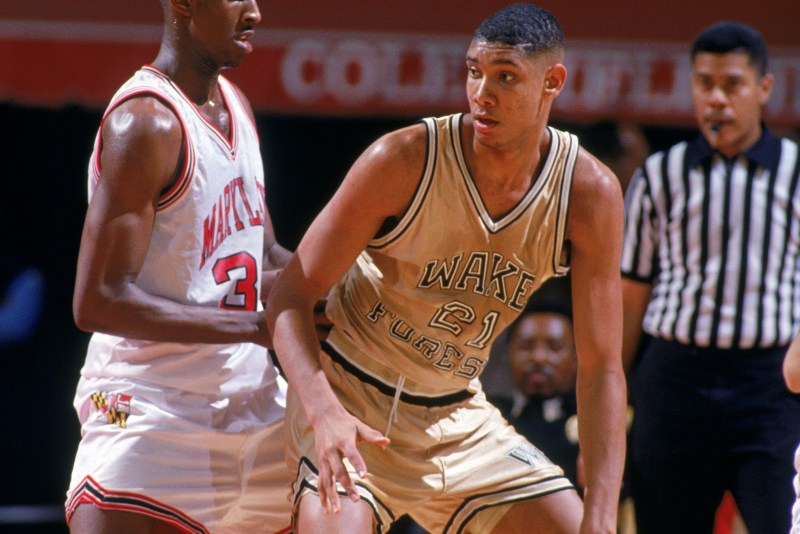 Tim Duncan #21 of the Wake Forest University Demon Deacons moves the ball during a NCAA game against the University Maryland Terrapins on February 16, 1994. (Doug Pensinger/Getty Images)

1997: As a senior, Duncan averages 20.8 points and wins a variety of Player of the Year Awards. He goes #1 in the NBA Draft, during what is otherwise one of the weakest classes in recent NBA history. (#2 pick: Keith Van Horn; only two other players go on to make even a single All-Star team.) 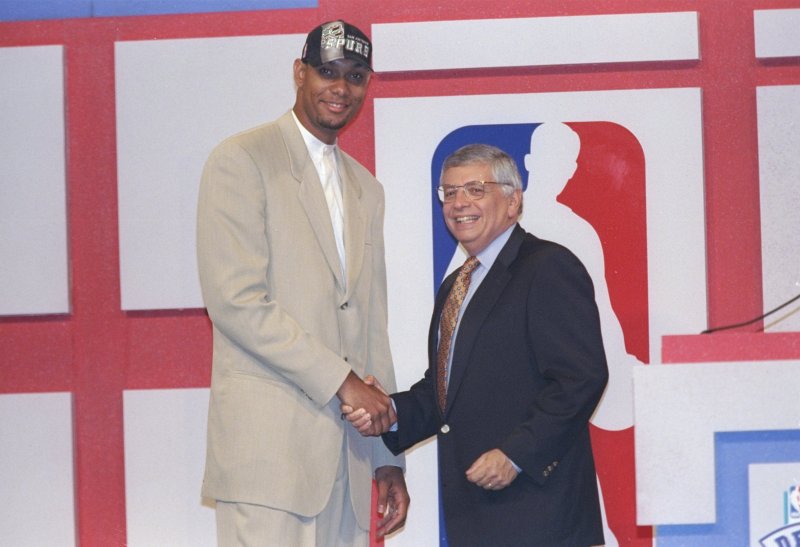 1999: In just his second season, the Spurs win the first title of Duncan’s career. Duncan earns the Finals MVP. Key teammates include the future Hall of Fame center David “The Admiral” Robinson. 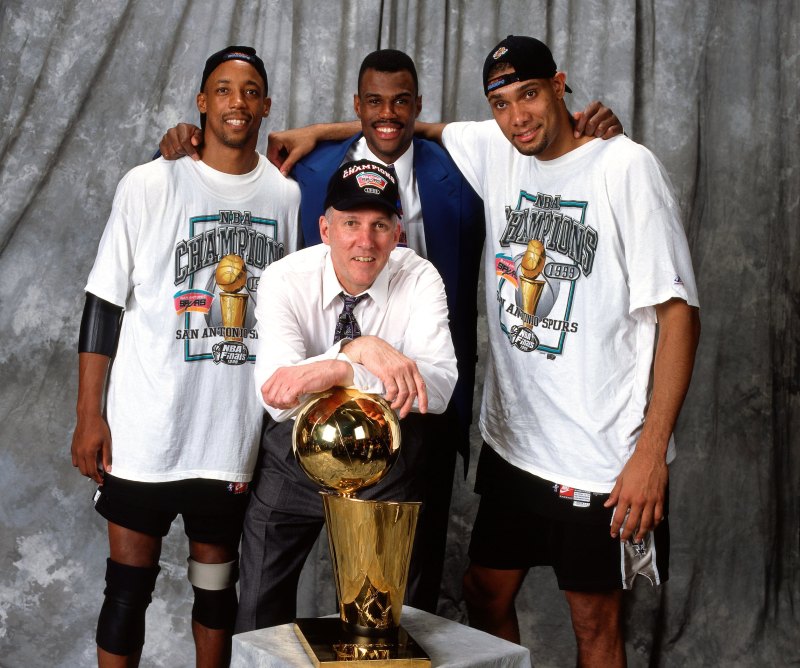 2004: Duncan plays on (by U.S. standards) a disastrous Olympic team that settles for bronze. Duncan never again plays in the Olympics. 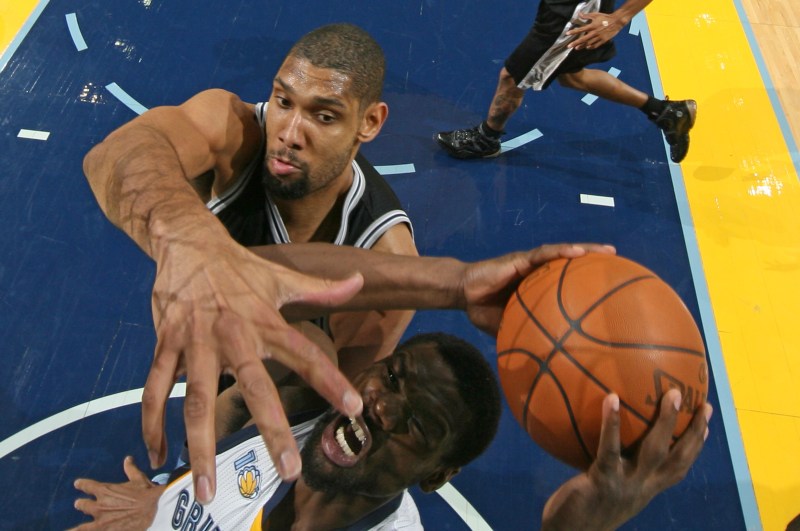 Tony Allen #9 of the Memphis Grizzlies goes up against Tim Duncan #21 of the San Antonio Spurs.  (Joe Murphy/NBAE via Getty Images)
NBAE/Getty Images

2007: Duncan wins NBA title #4. For the first time, he is not the Finals MVP (the honor goes to Parker). It is also the final regular season in which Duncan will score 20 points or more points, as he lets teammates take more and more shots while he focuses on defense. (Duncan continues to make All-Defense teams through the 2014-15 season.)

2013: The Spurs lose a crushing seven-game series to the Miami Heat, including Ray Allen’s miracle three-pointer to avoid defeat in Game 6. It is the first time Duncan has lost in the Finals and it is speculated it may be time for the Spurs to move on from their older players, including Ginobili and Duncan.

2014: In a rematch with the Heat, Duncan wins his fifth title. Finals MVP Kawhi Leonard emerges as the team’s clear star and, as always, Duncan seems glad just to win. 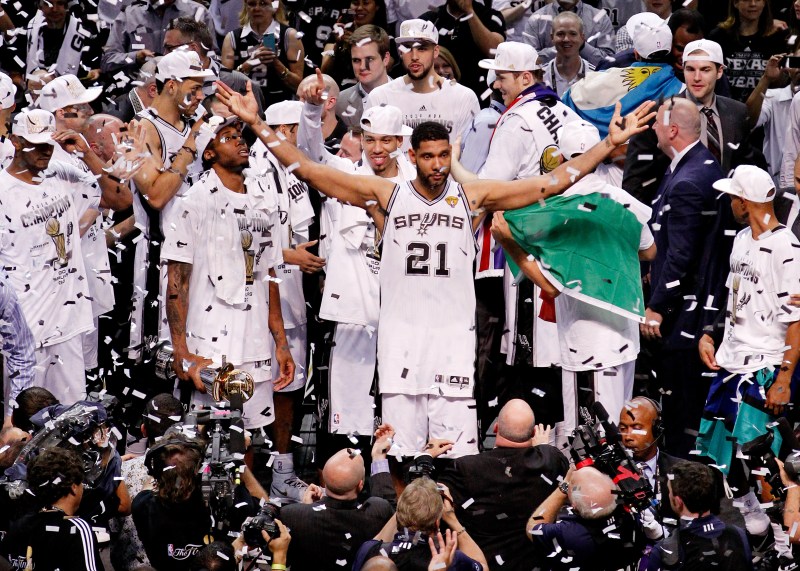 Tim Duncan #21 of the San Antonio Spurs celebrates after defeating the Miami Heat in Game Five of the 2014 NBA Finals at the AT&T Center on June 15, 2014 in San Antonio, Texas. (Chris Covatta/Getty Images)
Getty Images

2016: In the same season Kobe Bryant calls it quits with a full-on retirement tour, Duncan refuses to even put out a statement announcing his retirement, leaving his Spurs to spread the news.

The video below contains 10 of the great plays from Duncan’s career: never flashy, the highlights are a reminder of how he managed to be so relentlessly effective for 19 straight seasons: not a movement wasted as on both ends of the court Duncan does exactly what he wants.