In this photograph taken on June 15, 2016, a Nepalese artist restores sacred murals in a monastry in Lo Manthang in Upper Mustang. Deep in the heart of a medieval monastery in Nepal's remote Upper Mustang region, the battle to restore sacred murals and preserve traditional Tibetan Buddhist culture is in full swing. / AFP / PRAKASH MATHEMA / To go with 'Nepal-Tibet-Buddhism-Architecture-Painting' FEATURE by Ammu Kannampilly (Photo credit should read PRAKASH MATHEMA/AFP/Getty Images)
By Adrian Lam
(Prakash Mathema/AFP)

Deep in the heart of a medieval monastery in Nepal’s remote Upper Mustang region, the battle to restore sacred murals and preserve traditional Tibetan Buddhist culture is in full swing.

Tsewang Jigme is among the artists toiling to safeguard the unique cultural heritage of this former Buddhist kingdom high on the Tibetan plateau, which escaped the ravages of the Cultural Revolution from 1966-76 in neighboring China. 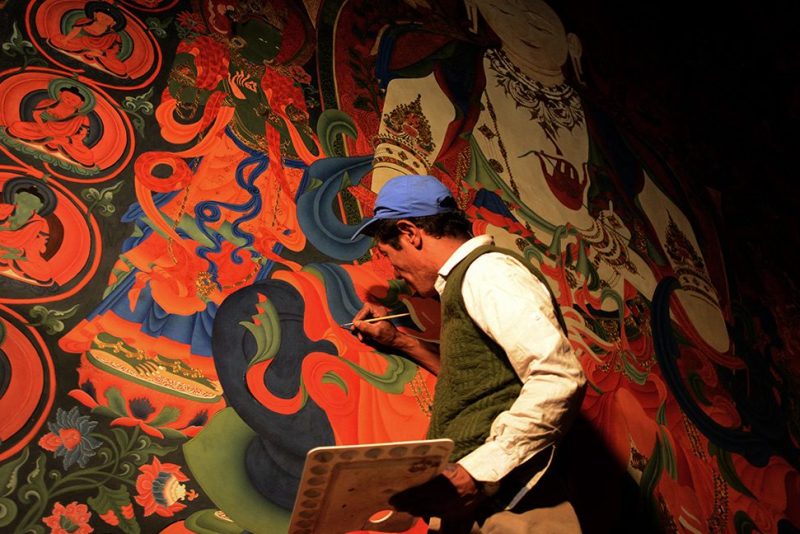 “These murals are irreplaceable… I feel nervous every time I touch them, I know I need to work very carefully so as not to do any harm to them,” the 32-year-old painter told AFP.

Upper Mustang only opened to outsiders in 1992 and its murals, scriptures and cave paintings provide a rare window into early Buddhism.

The region’s Lo Gekar monastery was established by the founder of Tibetan Buddhism and predates the oldest temple complex built in Tibet, which was severely damaged in the 1960s during the Cultural Revolution. 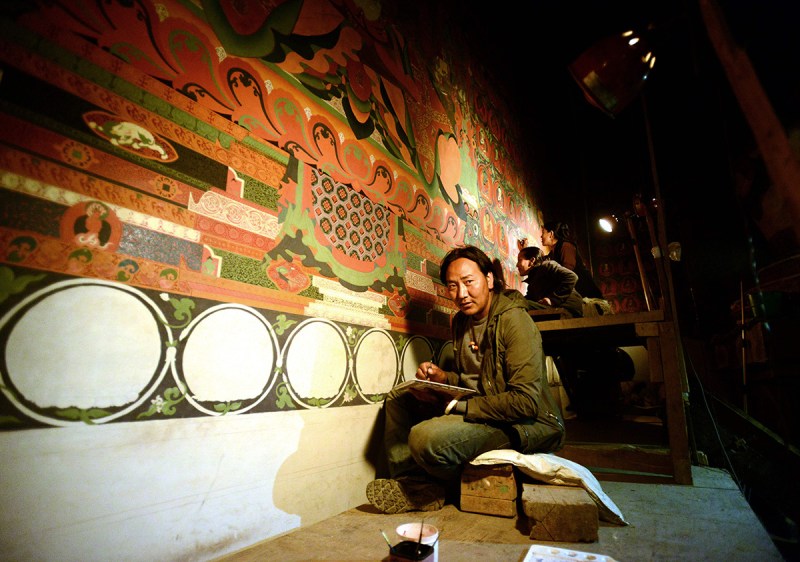 A decade ago, two chortens — Buddhist shrines believed to protect communities from misfortune — in the village of Ghemi were close to collapse. One was in such a poor state that children were using it as a playground and had broken interior painted slate panels.

“The shrine was already in such bad shape, the children had no idea that it was special and deserved respect,” said Raju Bista, treasurer of the local non-profit Lo Gyalpo Jigme Foundation.

In 2008, the foundation, which is headed by the former king of Upper Mustang, received nearly $23,000 in US government funding to restore monuments, including Ghemi’s chortens. 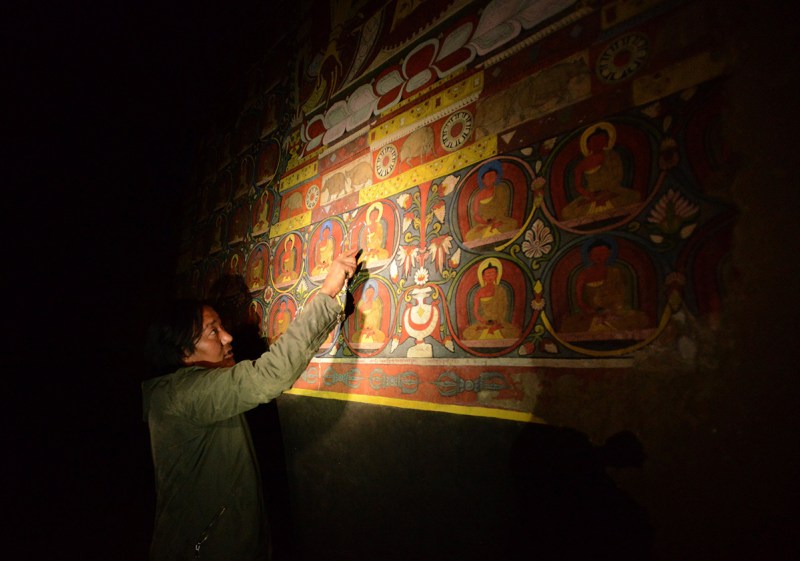 “The rich cultural heritage here is irreplaceable and the monuments are made of mud, of paint, of wood and can easily fade away and frankly be gone forever,” said the American ambassador to Nepal, Alaina B. Teplitz.

“I think that would be a loss for the people of Nepal but (also) for the world at large,” she told AFP.

The two-year-long restoration involved more than 100 workers and craftsmen, who cleaned the monuments, rebuilt the walls, replaced rotting timber beams, and repaired the carvings.

When a massive earthquake struck Nepal in April 2015, killing nearly 9,000 nationwide and destroying around half a million homes, Ghemi was unscathed, prompting devout villagers to say that the restored shrines had protected them.

Other monuments fared less well. Jampa Lhakhang, a 15th-century monastery famous for having the world’s largest collection of mandalas (Buddhist cosmic designs) painted on its walls, was severely damaged.

The earthquake weakened many medieval structures in Upper Mustang’s walled capital of Lo Manthang, including the monastery and the former king’s five-story palace. It also ruptured the main drainage system, allowing water to penetrate monastery walls and raising the risk of mould. 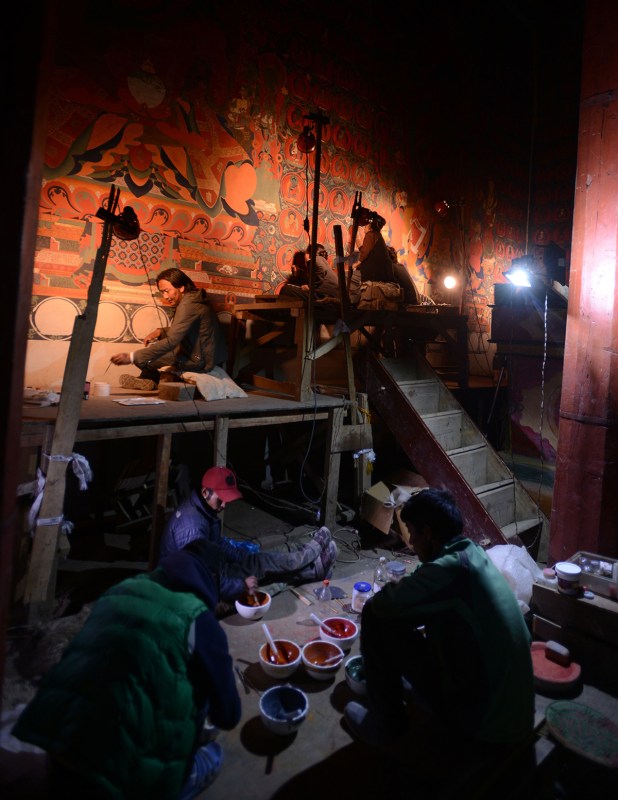 The quake caused layers of plaster to separate and crack into pieces at the Jampa Lhakhang, where shards of 500-year-old frescos still litter the floors.

The proposed restoration work will shore up the structure by injecting plaster and glue into the walls and will be overseen by the American Himalayan Foundation, which has worked in the region since 1998.

The murals will then be cleaned and retouched, a practice frowned on by some western conservationists.

The local Loba community, however, believe it is better to pray to undamaged images of the Buddha, and see it as their duty to keep them in good repair. That means artists like Jigme, who has spent years working to preserve Upper Mustang’s murals, play a critical role.

It is a painstaking process that involves grinding gemstones like lapis lazuli and malachite into a fine powder that is mixed with water and animal glue to create pigments.

“Compared to Tibet, where so much was destroyed, we have been very lucky,” Jigme said, recalling his visits to a Tibetan Buddhist monastery in China’s Sichuan province a decade ago. Jigme was part of a team working to restore murals covered by thick layers of mud, put there by villagers to keep the paintings safe during a failed 1959 uprising in the Tibetan capital Lhasa.

“It took a long time to remove the mud but slowly the face of god revealed itself… and all the old villagers watching us began to cry,” he said.

“They did whatever they could to save those paintings… now we have to do whatever we can to protect our heritage.”