55 years ago today, riots broke out at the Panama Canal.

Panamanians march in protest near the Presidential Palace during riots over the sovereignity of Panama Canal Zone, Panama, 1964. (Photo by Michael Rougier/The LIFE Picture Collection/Getty Images)
By Lee Ferran

To be the first item on the President’s Daily Brief, the secret intelligence document laying out the most pressing international crises of the morning, is a dubious distinction. That crisis, whatever it is, deserves the president’s attention more than anything else, in the judgement of the country’s top intelligence analysts.

So, as President Lyndon Johnson flipped back the front cover of his PDB on Jan. 10, 1964, he knew the situation in Panama must’ve taken a drastic turn. Amid high-wire Cold War tensions with the Soviet Union and a war in Vietnam, the tiny Central American nation dominated the first two pages of the seven-page report.

On this day 55 years ago, a riot broke out in the Canal Zone, the area around the Panama Canal administered and inhabited by U.S. employees and their families.

“Canal Zone police met resistance when they tried to move the Panamanian students out of the Zone,” the PDB reported about the events of the previous night. “The students were joined by other Panamanians at the border where the violence started.”

By then it was reported that 70 to 80 Panamanians had already been injured and another seven had been killed.

But the CIA, which wrote the PDB, made a prescient, if understated prediction: “Anti-US reaction in the wake of last night’s developments is likely to be prolonged.”

The cause of the riot? A simmering tension between the Americans and locals that burst into violence because of a flag. 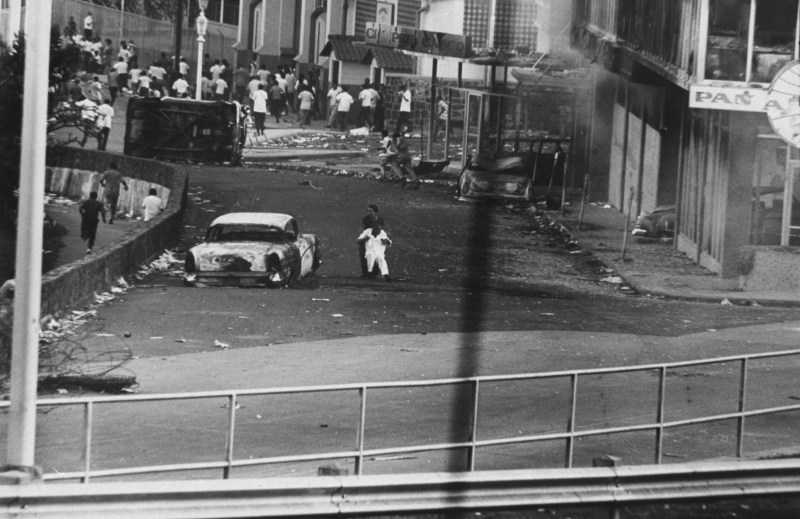 The Panama Canal had opened for trade 50 years before in 1914, more than a decade after the U.S. assisted the Panamanians in a rebellion against Colombia, which controlled the Central American nation at the time. After Panama gained its independence, the new government and the U.S. signed a treaty granting the U.S. the land it sought to build the canal and virtual total sovereignty over what was called the Canal Zone.

The historic occasion of the canal’s opening “fulfilled a dream that had persisted for nearly four centuries,” The New York Times wrote in 1964. “But the canal has since been a focus of Latin American grievances against the United States, particularly in the years of rising nationalism following World War II.”

What was a rising fever in the small nation broke on Jan. 9, 1964 when a student group attempted to raise a Panamanian flag next to an American flag at a local high school.

“Even though an agreement had been reached sometime in 1962 under President John F. Kennedy to allow the Panamanian flag to be flow alongside the American flag at civilian locations, this order was not carried out,” U.S. government archives described.

The presidential brief stated that the “issue of flying the Panamanian flag in the Zone has always been a bone of contention, with the Panamanians insisting on this dual display.”

The Times reported that no flags were supposed to fly outside the high school, but when a group of Americans hoisted their flag, the Panamanians attempted to follow suit.

“There were reports that the Americans drove out the Panamanians and defiled their flag. Thereupon violence broke out with a swiftness that astonished Washington,” The Times reported.

By the CIA briefing Johnson received on Jan. 11, a “lull” had descended on Panama as the Panamanians buried their dead after the first night of chaos, but the CIA suspected “more violence is likely.” American families attempted to escape the country, with several slipping across the border to Costa Rica.

The riots continued for three days total and destroyed an estimated $2 million worth of property, according to the U.S. archives. At least 20 people were killed, including a small number of American soldiers.

The Panamanian government severed relations with the U.S. in what The Times called Johnson’s “first major international crisis.”

While the riot died down, the anti-American sentiment didn’t go away. Archives show the U.S. eventually made a number of concessions to the Panamanians, including increased wages for local workers, the hiring of Panamanians to the Zone police force and, most significantly, the promise of new negotiations to replace the old treaties.

“Last January there was violence in Panama,” Johnson said in a December 1964 address. “As I said then, ‘Violence is never justified and is never a basis for talks.’ But while the people of the United States have never made concessions to force, they have always supported fair play and full respect for the rights of others.”

Negotiating new treaties proved an immensely complex and difficult prospect, however, and it wasn’t until decades and several U.S. presidents later that control of the canal was finally given over to Panama on Jan. 1, 2000.

“The United States could not aspire to be a good neighbor to Latin America and continue occupying and dividing the territory of a country considered a friend,” said Army Secretary Louis Caldera, chairman of the joint U.S.-Panamanian commission that had overseen the waterway’s administration.

But back in 1964 President Johnson would’ve opened his PDB on January 13, the morning after the riots’ final day, to find Panama had been relegated to the number three spot.

The writers behind the briefing had moved on to another brewing emergency, this one in Zanzibar.