Since the 17th century, scientists in various fields had made observations about the ridges and patterns on our fingertips. In 1684, Nehemiah Grew, an English doctor and microscopist, published the first scientific paper describing the unique skin covering our fingers and palms. But the science of fingerprinting wouldn’t arrive until centuries later.

In fact, it wasn’t until 1892, when Sir Francis Galton, a cousin of Charles Darwin, published “Fingerprints,” the first book of its kind to outline a fingerprint classification system. He classified three different patterns in fingerprints, which he called loops, arches and whorls. 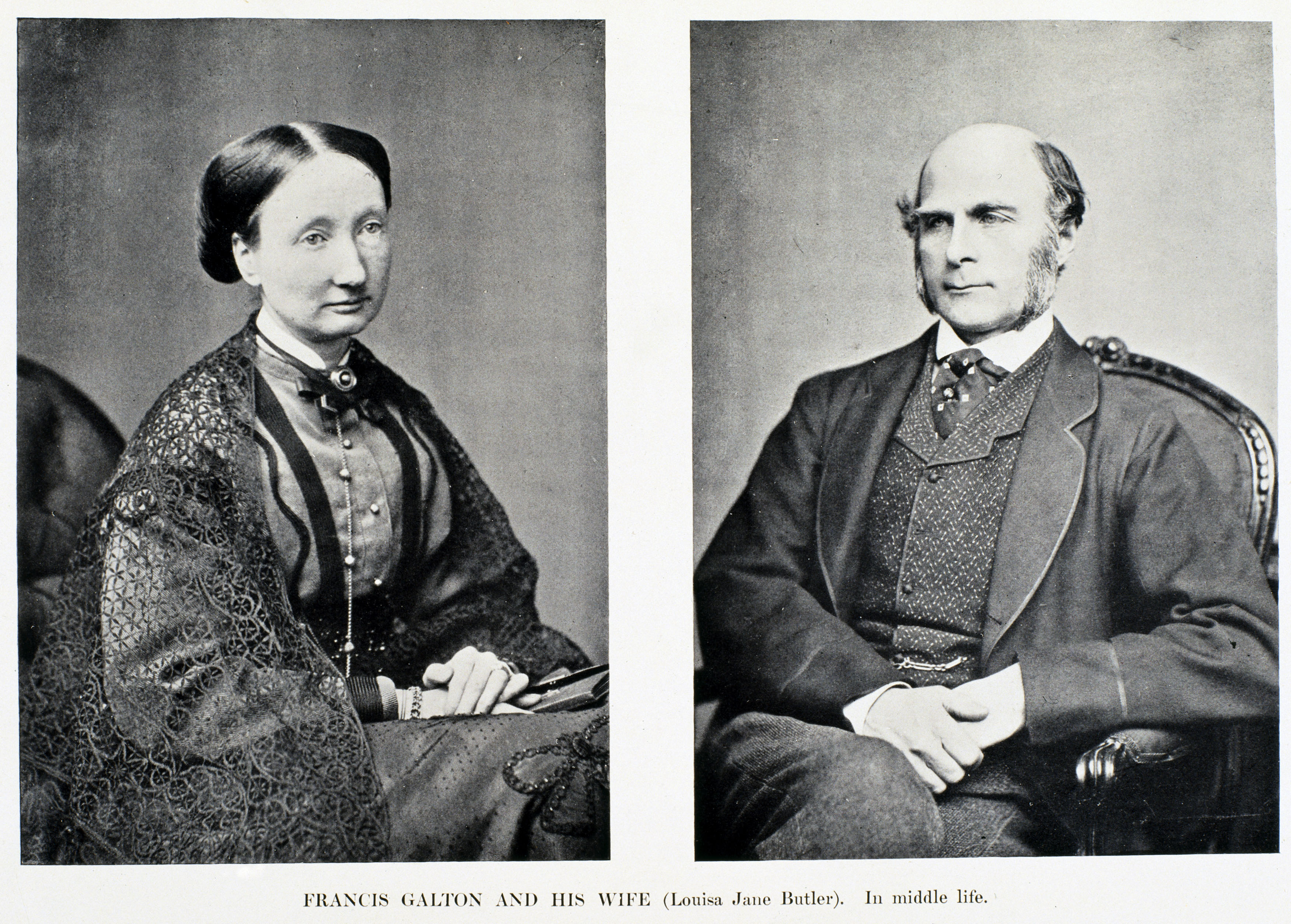 Sir Francis Galton and his wife Louisa Jane. Galton was an English scientist and cousin of Charles Darwin. His work covered the areas of meterology, colour blindness, fingerprint identification and mental imagery. Galton was also the founder of eugenics, which attempts to use controlled breeding to increase the occurence of desirable heritable charactersitics in a population. (Photo by SSPL/Getty Images)
SSPL via Getty Images

Arches, like narrow mountains, slope upward and then down, while whorls form a spiral or circular-shaped pattern.

F. B. I. Police Academy: fingerprint study, one of the main courses. There are three different fingerprint pattern classifications: whorls, loops, and arches. (Getty Images)

Scientists look at the shape, size, and the number and arrangement of the lines of fingerprints to distinguish one person and print from the another.

In Argentina, around the same time as Galton, a Buenos Aires police officer named Juan Vucetich was working on a local murder investigation involving two boys while also developing his own variation on the fingerprinting system.

In 1892, when Vucetich used fingerprinting to positively identify one of two murder suspects, it was the first time fingerprints had been used in a criminal investigation. He called his system “comparative dactyloscopy.” 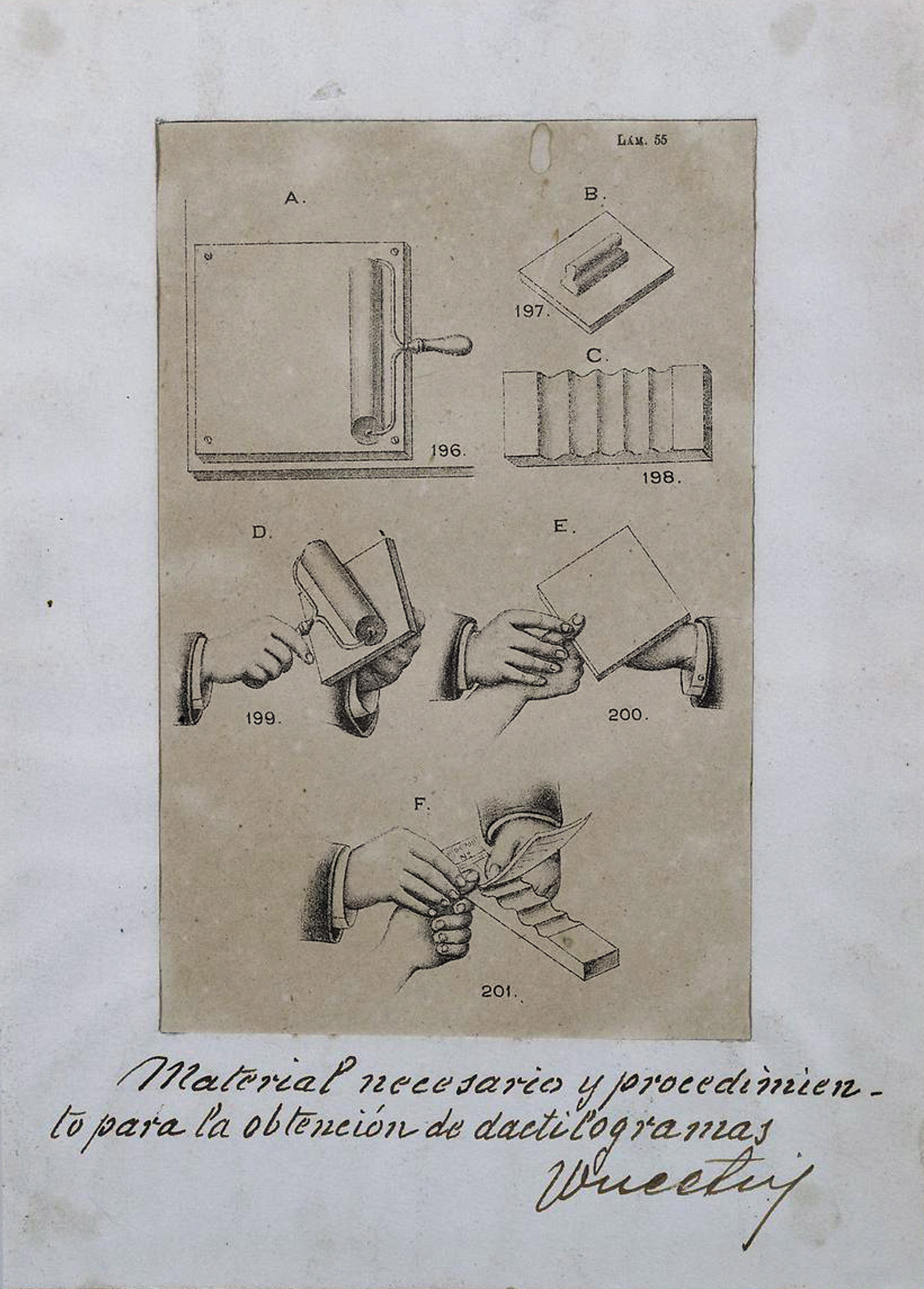 Sir Edward Henry, a London police officer, built upon Galton’s system and created Henry Classification System. Sir Henry’s system replaced a French system developed by Alphonse Bertillon which measured suspects’ feet, heads, and other features that might distinguish one perp from the next. 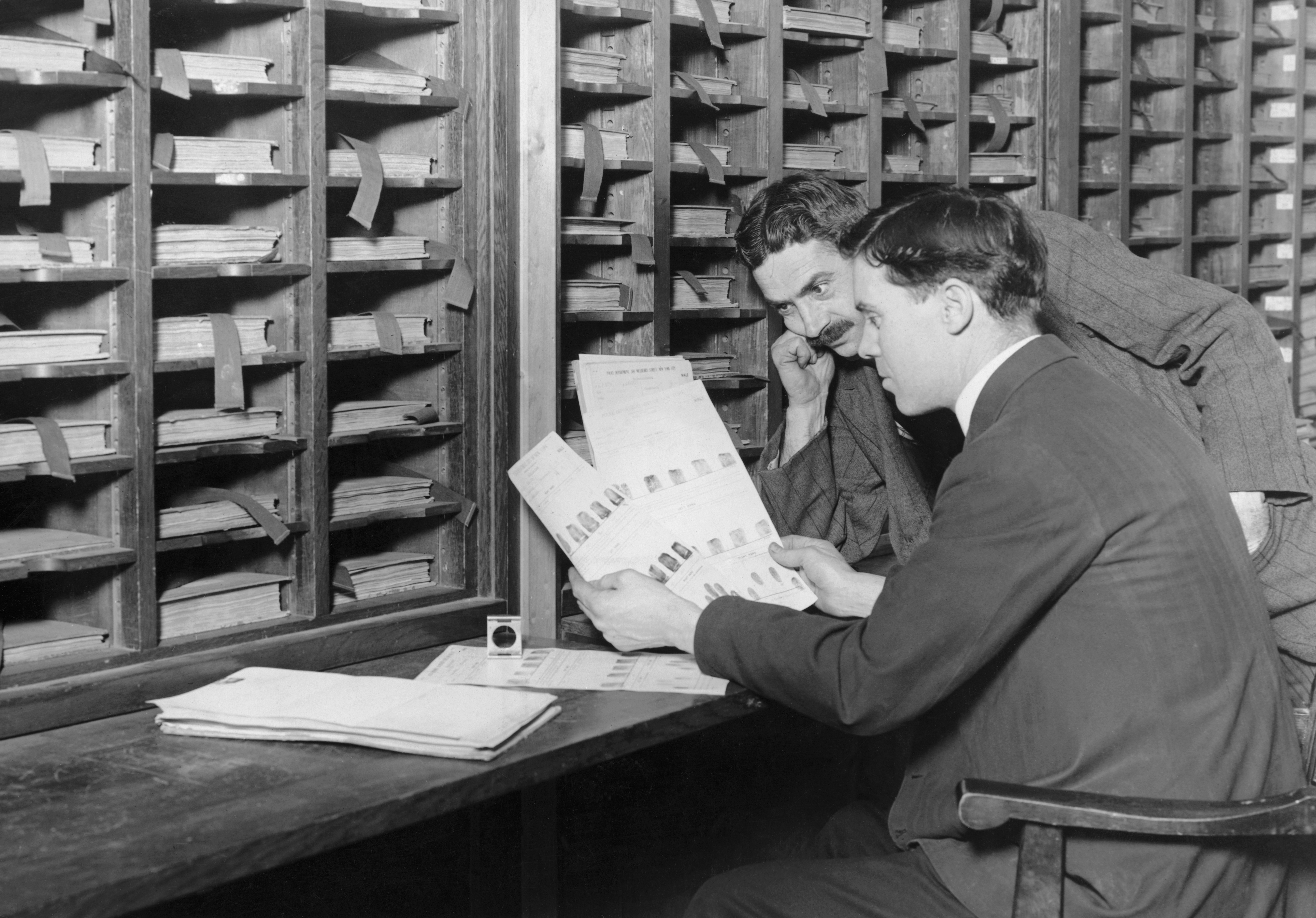 By 1901, Scotland Yard had established the first Fingerprint Bureau and a few years later the FBI and NY state prisons adopted the use of fingerprints for identification. 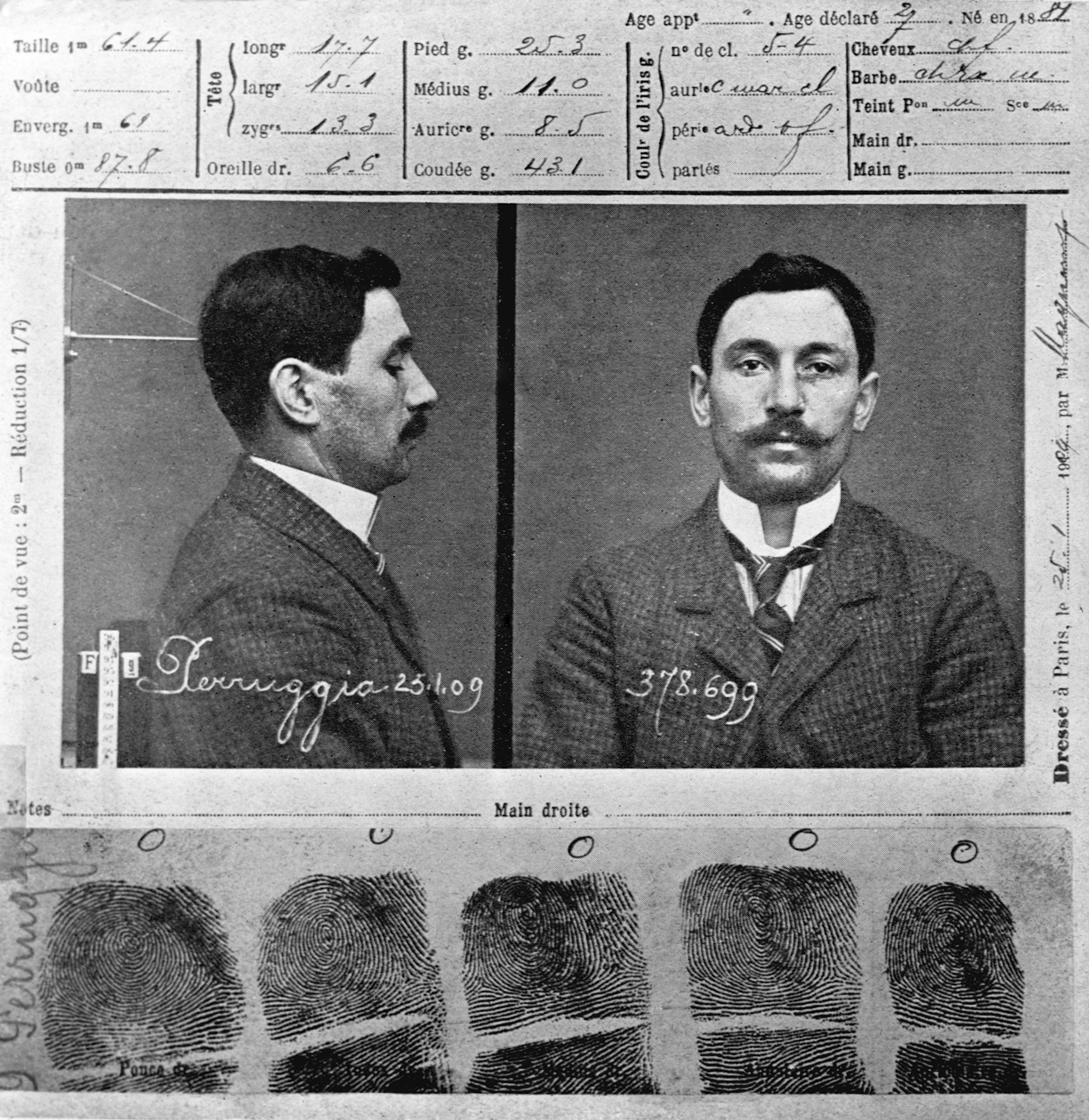 1911 mug shot of Vincenzo Perugia, the Italian man who stole the Mona Lisa out of the Louvre Museum in Paris. Police found fingerprints at the scene and used those to identify the thief. Perugia claimed he completed the act out of patriotism, insisting the painting belonged in Leonardo da Vinci’s home country, Italy, and not France. (Getty Images)
Bettmann Archive

In 1911 when Vincenzo Peruggia snatched the Mona Lisa from the Louvre (where he also worked), he also left behind some prints that then later led to the Italian thief’s identification and conviction in Europe. 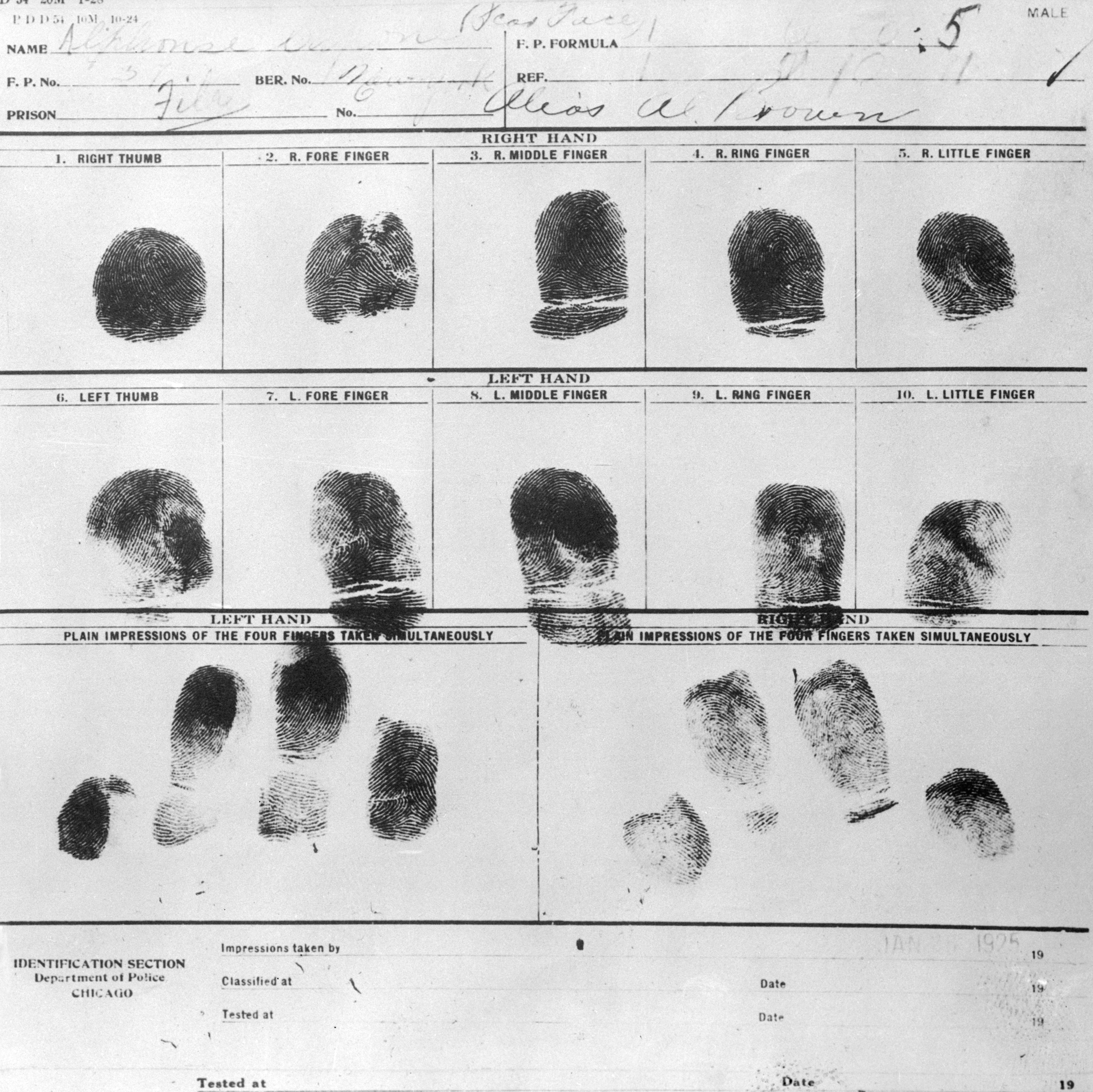 Al’s Fingerprints Marked for Police. Philadelphia, Pennsylvania. The fingerprints of “Al Scarface” Capone, which were taken by Philadelphia police when they arrested him and his bodyguard Frank Cline here. Capone and Cline received a year’s sentence for carrying concealed weapon. (Getty Images)
Bettmann Archive

That same year, the Illinois Supreme Court officially recognized fingerprints as a means of identification, making it the first court in the country to do so. By the 1920s, fingerprinting was a regular procedure for police. 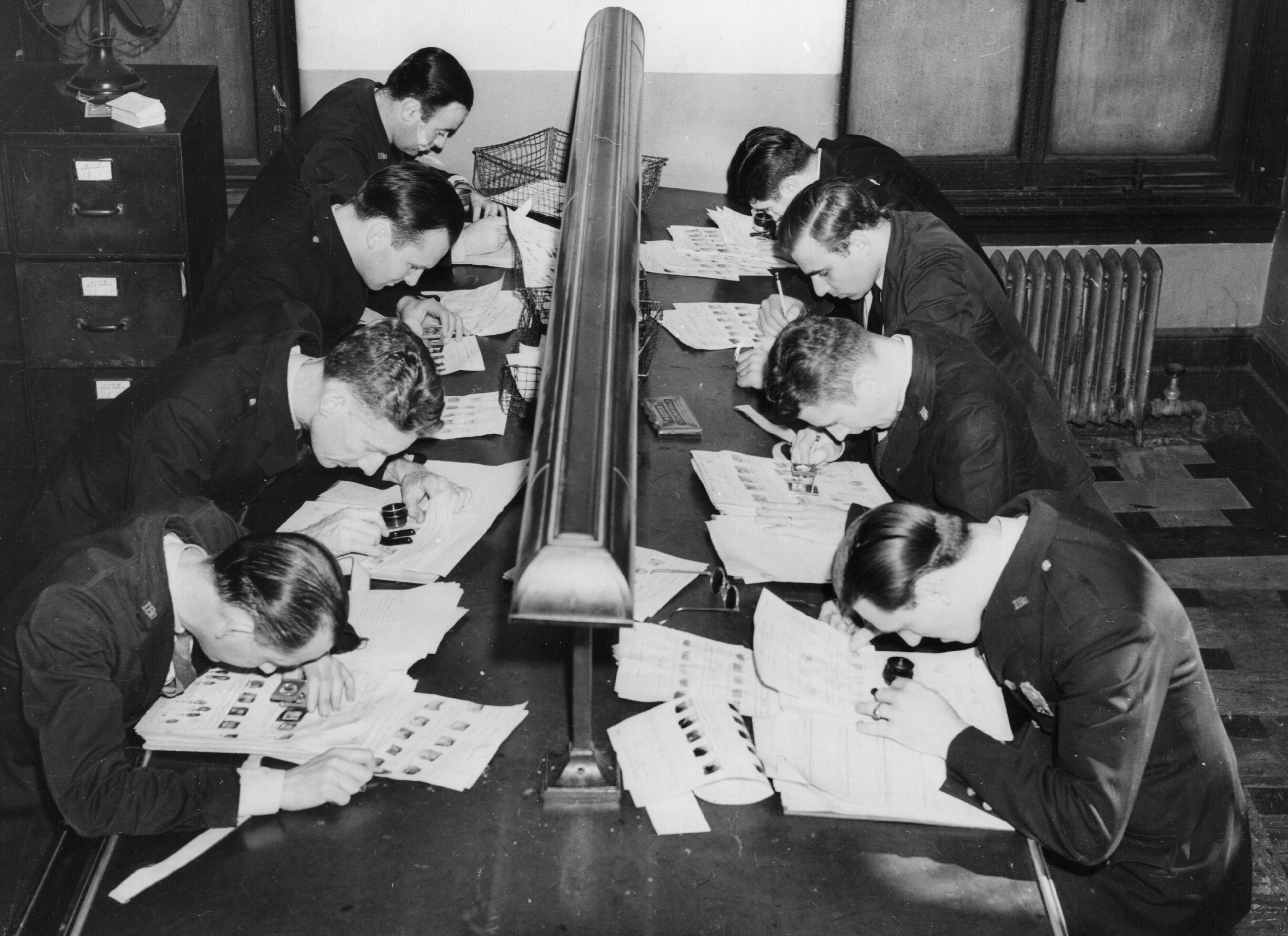 Over the decades enough fingerprints were taken that by 1980 the first computer database of fingerprints was created. Known as Automated Fingerprint Identification System (AFIS), its is now used by the CIA and FBI as well as local law enforcement.

AFIS collects digital prints with sensors and then uses computers to look for patterns in the prints (based on Sir Henry’s system) and finds the best match in the database. As of 1999, every law enforcement agency in the United States was connected to the system, sharing prints across agencies (from local to federal) and states.

Law enforcement agents can collect two types of prints: visible and latent. Visible prints are made on an impressionable surface like blood or dirt while latent prints are made when oil, sweat or another substance on the skin leave behind the print on a surface that is touched by the perpetrator. 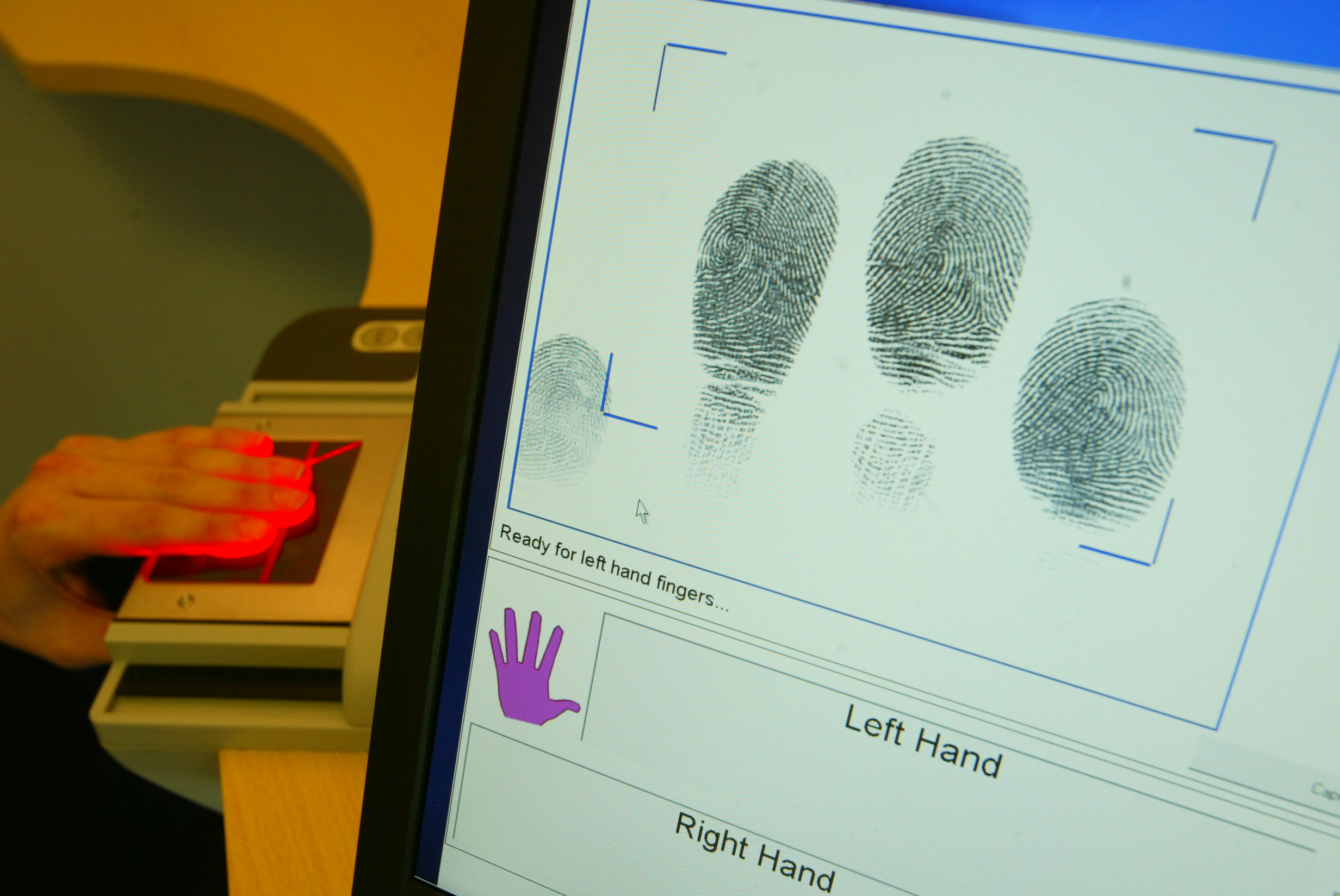 Nowadays it’s not just criminals being fingerprinted. Immigrants are fingerprinted and some folks have their prints taken to obtain a state driver’s license or as part of a background check for work for a government job or as a police officer or teacher. Last week, after the mass shooting in Aurora, a state lawmaker is seeking to require fingerprinting for residents of Illinois to own a gun. 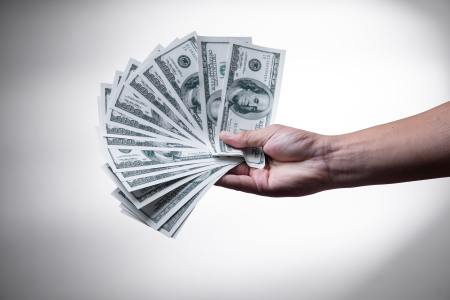