This picture taken on December 5, 2016 shows a city officer displaying a QR code on his fingernail near the Iruma city hall in Iruma, Saitama prefecture, a western suburb of Tokyo. A Japanese city has introduced a novel way to keep track of senior citizens with dementia who are prone to getting lost -- tagging their fingers and toes with scan-able barcodes. A company in Iruma, north of Tokyo, developed tiny nail stickers, each of which carries a unique identity number to help concerned families find missing loved ones, according to the city's social welfare office. (Toshifumi Kitamura/AFP)
By Adrian Lam 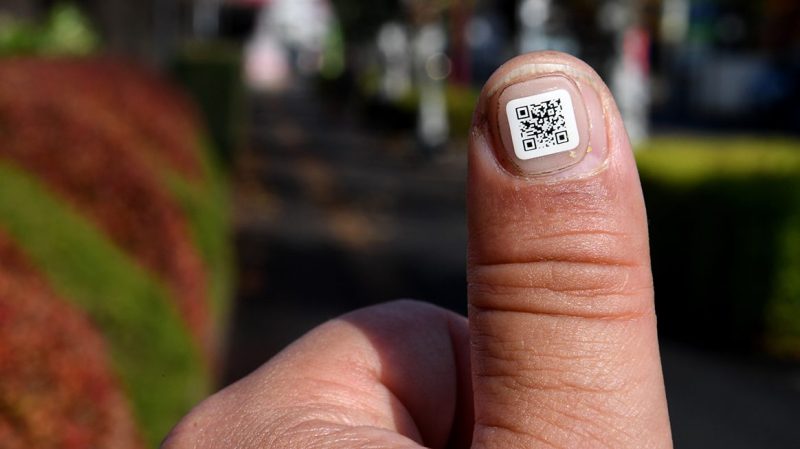 A company in Iruma, a Japanese city north of Tokyo, has introduced a novel way to keep track of senior citizens with dementia who are prone to getting lost — tagging their fingers and toes with scan-able barcodes.

Orange Links, in cooperation with the city government, developed tiny, waterproof fingernail stickers that carry unique identity numbers to help concerned families find missing loved ones, according to the city’s social welfare office. The stickers — part of a free service launched this month and a first in Japan — measure just 0.4 inches in size.

“Being able to attach the seals on nails is a great advantage,” a city worker told AFP.

“There are already ID stickers for clothes or shoes but dementia patients are not always wearing those items.” 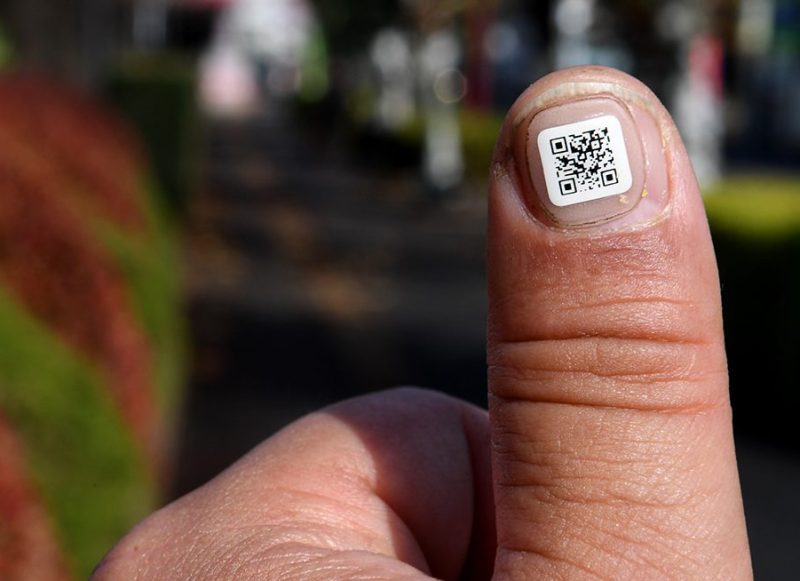 If an elderly person becomes disoriented, police will find the local city hall, its telephone number, and the wearer’s ID all embedded in the QR code.

The chips remain attached for an average of two weeks — even if they get wet — the official said, citing recent trials.

Senior citizens expected to make up a whopping 40 percent of Japan’s population by 2060, and this QR code initiative is just one of many that Japan is employing to manage its aging population. Last month, Japanese police started offering noodle discounts at local restaurants to elderly citizens who agreed to hand in their driving licenses, following a series of deadly accidents involving elderly drivers.