Mosquitoes know where you are because they can sense the CO2 you're exhaling. (Getty)
By Sean Cunningham
(Getty Images)

One proposed approach is to genetically modify mosquitoes. However, it has been pointed out that there have been many cases in pest control where the cure is worse than the disease. (Example: The mongoose was introduced to Hawaii to control the rat population. They did not do so, but did wipe out local birds.) Quite simply, many would argue before we pursue this method too aggressively, we should understand its full implications.

Then there is another option, the Debug Program, which bills itself as a “group of scientists and engineers developing technology to raise and release safe and sterile mosquitoes to eliminate the ones that carry disease.” While this idea called the sterile insect technique (SIT) is innovative, it is not novel. SIT was first used to combat the New World screwworm, a livestock parasite, during the 1950’s. What distinguishes the Debug Program, a project led by biomedical startup Verily, from other initiatives like it is machine learning and computer vision. 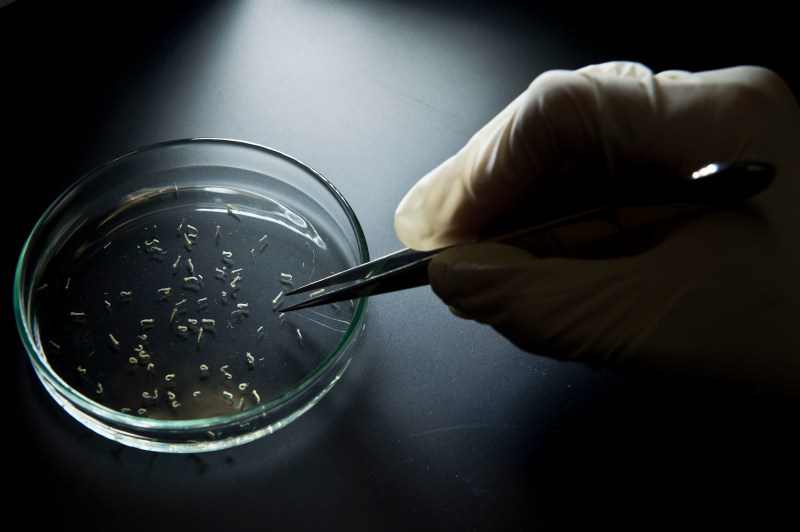 Aedes aegypti mosquitos are seen in containers at a lab of the Institute of Biomedical Sciences of the Sao Paulo University, on January 8, 2016 in Sao Paulo, Brazil. Researchers at the Pasteur Institute in Dakar, Senegal are in Brazil to train local researchers to combat the Zika virus epidemic. (Nelson Almeida/AFP/Getty Images)
AFP/Getty Images

Being a subsidiary of Google’s parent company Alphabet has its perks; and for Verily, Google’s artificial intelligence resources is their perk. Christina Farr of Fast Company explains the advantage Verily has above other teams their goal of “developing algorithms to rapidly distinguish between the male and female mosquitos by picking up on subtle physical characteristics that are almost impossible to detect with the naked eye.”

With this unique application of AI, Verily is trying to avoid the accidental release of female mosquitos, which infect humans, that happens when scientists hand-separate the genders, which is common, before release. In a company statement announcing the Debug Program, Verily said it would use “combination of data analytics, sensors, lab automation technology, and scientific expertise to solve specific issues around mass-production and sex-sorting of mosquitoes, and to enable efficient and targeted releases.”

Sounds like the perfect solution? It could be, but there are some serious questions to resolve first. Learn more about them by watching the video below.