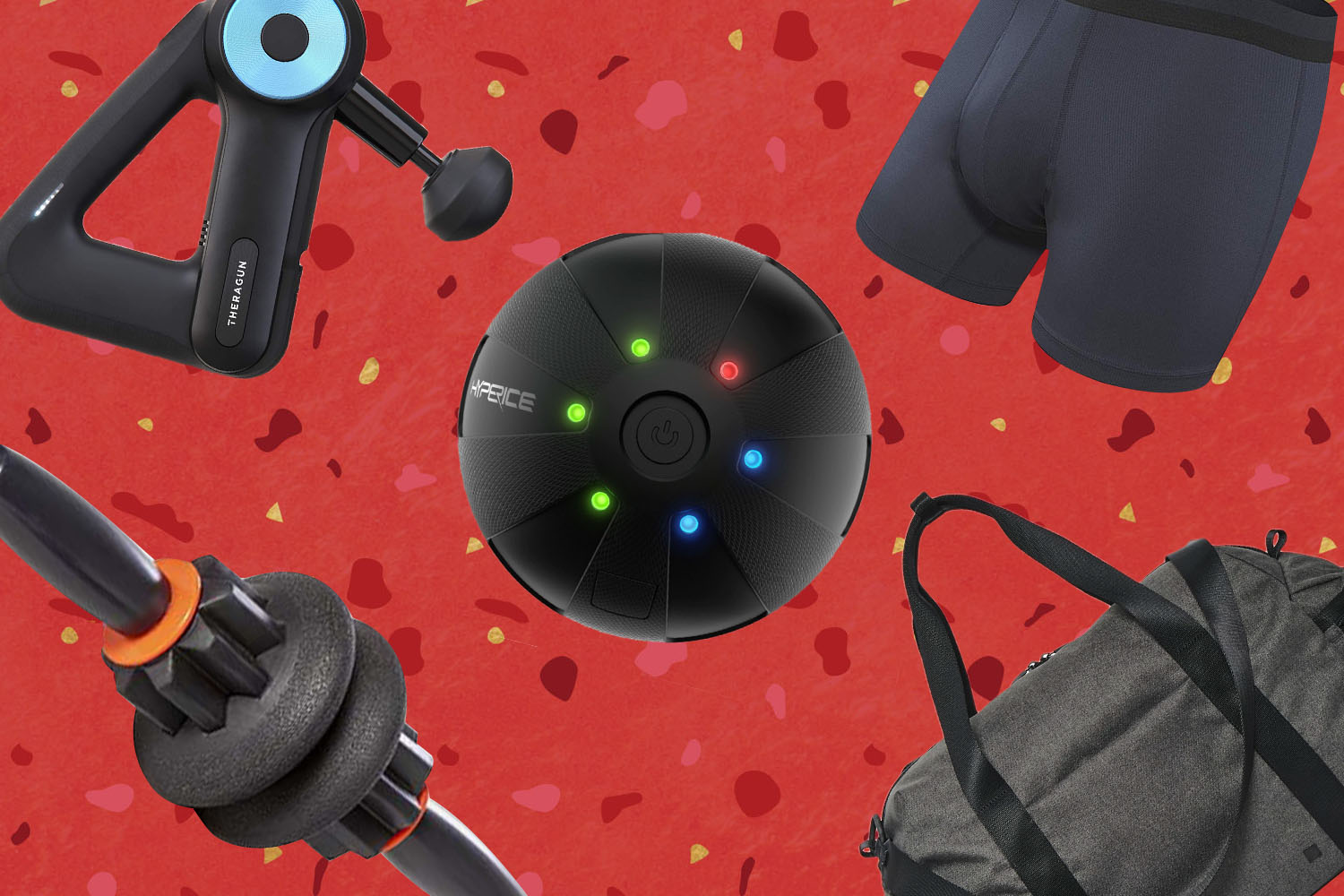 The fitness industry has come a long way since Bowflexes and Terrycloth sweatsuits ruled the roost. Consider a few of the phrases that have now comfortably entered the wellness lexicon: “four-way stretch,” “percussive therapy,” “sport earbuds,” and “plant-based energy bars.” We know more than ever about what it takes to get fit, and, specifically, what tools and products can help us get there.

If you’re already shelling out for an expensive gym membership, your buying emphasis should not be on clunky workout machines destined for the back of the garage, but on specialized toys and tech that emphasize recovery, make your workouts more comfortable, and encourage you to keep getting after it, especially when you don’t want to.

2019 was a good year for such products. The athleisure space only grew, with a variety of young challengers joining the ranks of Lululemon and Rhone. Soft tissue work, which we know is insanely important for keeping muscles, tendons and ligaments healthy, has led to a therapy gun arms race. Meanwhile, it’s now easier than ever to sweat your way through a workout without your music falling out of your ears. And importantly, more attention has been given to products that bolster mental health.

Below, we’ve rounded up 15 products that will complement or improve any fitness routine on the planet. From revolutionary protein shakers to memory foam meditation pillows to underwear that just does a bang-up job of protecting your man parts, it’s all here.

Hyperice is Theragun’s biggest competitor, but we’re not in the business of playing sides. This little ball allows you to take percussive therapy on the road, which is huge, considering I’m most in need of a little tissue work after being cooped up in a long flight. It’s basically a tennis ball on steroids, with three levels of vibration; for best results, get on the floor or a mat, and situate it right in the area that you’re feeling the most tension.

Jumping rope is “the most convenient, efficienticent and effective exercise in the game,” according to former boxer and current supermodel trainer Michael Oladije Jr. The first step towards high-stepping is getting yourself a no-frills rope. We like this classic from Everlast.

A welcome addition to our athleisure arsenals. Vuori is based in Encinitas, California, and makes a variety of approachably-priced tees, hoodies, workout shirts and joggers. I’m a huge fan of their pants in particular, which utilize a four-way stretch fabric that is just stupid soft.

When it comes to Under Armour or Nike, stic,k to their mesh shorts — their underwear is an in-house afterthought. Saxx, meanwhile, was literally founded on the concept of preventing chafing, back in the late aughts. The founder, Trent Kitsch, invented a hammock-shaped “ballpark pouch” meant to reduce the floating around (and subsequent friction) of your parts down there. I’ve worn them for lifts, cardio, jump roping, you name it, and Saxx is the real deal.

We tested a bunch of gym bags earlier this year, and dubbed this 37-liter number “the most office appropriate,” thanks to its pared-back looks and waterproof exterior. Commutes don’t stand a chance. We’re also fans of its shoe garage, padded laptop sleeve, and external water bottle pocket.

The Powerbeats Pro is the latest generation in sport earbuds, and it’s hard to imagine them improving much on this. Like Apple’s AirPods, they’re completely wireless and come with a charging port. But they loop over the ear, and are completely waterproof, so you can sweat away. I’ve been wearing them to the gym for a month and can confirm that they’re worth the upgrade.

For our money (and it costs a solid chunk of it, to be fair), this is the best everyday recovery tool out there right now. Designed by MIT engineers, the Theragun uses percussive therapy to encourage blood flow to tight, afflicted areas of the body. If you’re serious about fixing your back, unwinding your calves, or easing old strains in your hammies — after the gym, a run, a flight, or just eight hours at the office — it’s a no-brainer.

Outdoor Voices has started a fitness revolution with its #DoingThings (running, yoga, lifting, hiking) mantra, and this piece is the exact base layer for doing ‘em in. It’s basically your favorite activewear tee as a pocketed sweatshirt.

Massage guns and percussive therapy balls are great for the lower back and the hammies, but aren’t as effective at greeting tension in small muscle areas as a simple plastic and rubber roller. Brazyn’s model is compact enough to give muscles in the neck, forearms and feet the attention the deserve. It combines a traditional runner’s roller stick with a ribbed foam roller, while packing down to about half the size of a standard massage tool.

Our preferred lifting shoe. This is what you should be lacing up in when making the most of that gym membership. The Nano series began in 2011, when Reebok became the official supplier of CrossFit, but Reebok has taken pains in recent years to make the sneaker more accessible for the lifting public. Its boxiness is perfect for squats; it acts as a sort of set platform, and thus discourages “fidgeting,” which can lead to improper mechanics or even injury.

This past July, we sent nutritionist Karin Adoni Ben-David a list of ingredients for eight different (unmarked) energy bars, and asked her to power rank them based on their nutritional value. Sakara’s plant-based Energy Super Bar came in first overall. Her words: “This bar contains wholesome ingredients, healthy fats, it’s high in fiber and protein, and has the right amount of antioxidants, vitamins, and minerals.” It’s tasty, too. I’ve tried it before and would highly recommend. Pick up a pack of six and test it out for a week as a pre-workout snack.

Free thyself from the tyranny of the screen, like so. The Mighty Vibe looks and functions a lot like one of those clip-on iPod Shuffles from the late 2000s — except you don’t have to pay $1.29 a song to stuff it with your favorite music. The player syncs straight to Spotify, so you can load it up with playlists. InsideHook’s Creative Director swears by this thing for running through cities on the first day of a trip abroad, which is a good call. I like bringing it to the gym; it helps me forget about texts for an hour and focus on the workout at hand.

Reigning Champ is a Vancouver-based brand that makes activewear and workout-adjacent wares. It takes its stylistic cues from varsity jackets and old boxing cuts. We love this robe. It’s made with “tiger fleece,” whatever the hell that means. It doesn’t necessarily matter. Wear this out of the shower after a hard workout and pretend you just went 12 rounds with Apollo Creed.

You can’t take care of your body without taking care of your brain. I initially tested out WAVE’s meditation music experience back in September. It’s a memory foam pillow, a pair of headphones, and a music library of original musical compositions, which work together to calm you the hell down. It’s a clever take on the mindfulness app trend, started by the fellas behind those Y7 yoga studios.

The folks behind Bolde Bottle set out to redesign the protein shaker —which, somehow, has looked the same since the ’90s. They came up with the sleek number you see above, a stainless steel, vacuum-insulated vessel that doesn’t make noise when you shake it, and doesn’t smell long after you’ve slugged your shake. It’s still a Kickstarter campaign, but if you contribute now, you can get your bottle this December.