It's been a year since the opioid epidemic was declared a Public Health Emergency.

That’s the email you get after you contact LinkedIn because you got an update about your friend’s employment status on a warm spring day even though you saw his body go in the ground during the winter when it was cold and you know he’s no longer concerned about the job market.

That’s the email you get after you contact LinkedIn to do the only thing you can do at this point for a friend you had before there were social media sites like LinkedIn.

And that’s the email you are becoming even more likely to get because the rate of people passing away unexpectedly at home — a euphemism for overdosing on fentanyl, oxycodone or some other member of the opioid family — is still alarmingly high despite the Trump administration declaring the opioid crisis a nationwide Public Health Emergency a year ago today.

According to preliminary estimates from the Centers for Disease Control based on the most recent data available as of early October, more than 71,500 Americans died of drug overdoses in 2017, a 10 percent jump from 2016.

If that number is accurate, the death toll figure is higher than the peak yearly death totals from HIV, car crashes or gun deaths and more than the total number of U.S. military deaths in all 15 years of the Vietnam war.

Of the approximately 71,500 overdoses, about 48,600 are estimated to have been caused by natural or synthetic opioids like morphine, fentanyl, oxycodone, or heroin, or some combination therein. 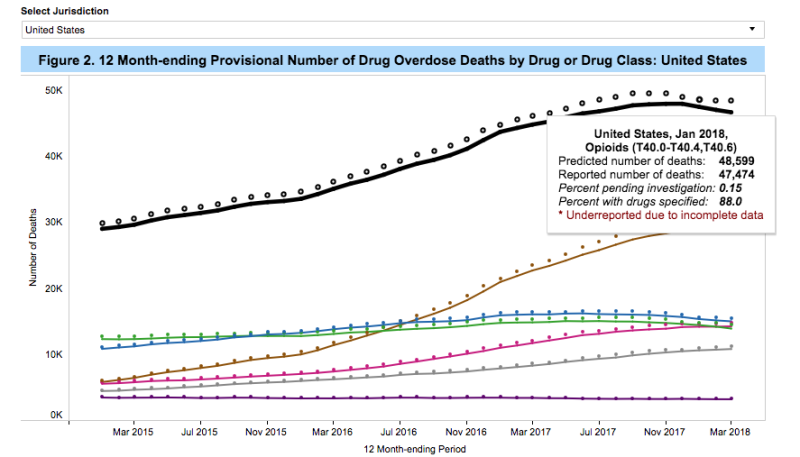 So who are the potential victims of this epidemic? You probably have already seen one of them already today if you’ve left your house.

And an expensive one.

According to an analysis by healthcare research nonprofit Altarum, opioid addiction cost $115 billion in 2017 and direct costs (lost wages, emergency room treatment, drug addiction counseling) from the epidemic have topped $1 trillion since 2001.

But there is reason for hope.

Earlier this week, nearly a year after declaring a Public Health Emergency, President Trump signed a bill, the Substance Use-Disorder Prevention that Promotes Opioid Recovery and Treatment (SUPPORT) for Patients and Communities Act, into law.

Unleashing more than $6 billion in funding to fight opioids, the bill’s provisions intend to expand addiction treatment, speed up research on alternative drugs, and provide Medicaid funding to treatment centers with more than 16 inpatient beds.

“There have been positive developments in the last year to address the opioid overdose epidemic. The SUPPORT for Patients and Communities Act, which includes several provisions to address the current treatment gap and expand access to evidence-based care for substance use disorder,” the American Society of Addiction Medicine told RealClearLife in a statement. “While this legislation is a good start, additional systemic changes to our current addiction treatment infrastructure are needed to turn the tide of this public health crisis and prevent future crises related to substance use and addiction.”

One of those changes would be altering 42 CFR Part 2 (Part 2), a law that institutes heightened confidentiality protections for certain medical records relating to substance use disorder. That restriction can lead to physicians and other practitioners not having access to complete patient records. According to ASAM, the law hinders progress because “addiction treatment too often remains siloed from  mental health and primary care services.”

“The SUPPORT Act is a critical step in the right direction, but it is only that- a step,” according to the ASAM. “We need to make thoughtful changes to modernize Part 2 so that addiction treatment becomes an integral part of mainstream, evidence-based medicine.”

If you or someone you know needs assistance with an opioid-related problem, please visit the Substance Abuse and Mental Health Services Administration’s website or call 1-800-662-4357.