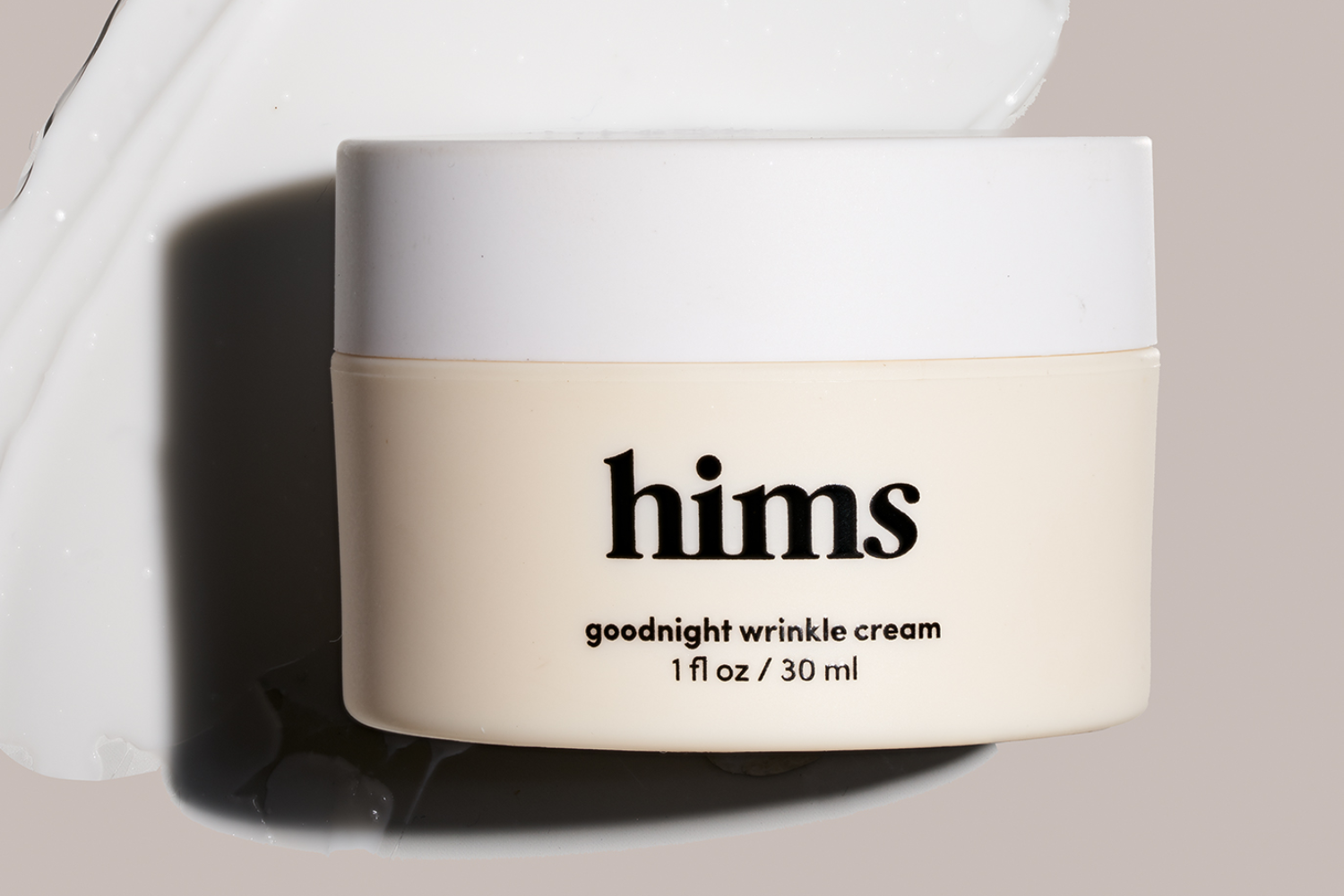 One thing that happens when you are a woman in men’s media is you tend to accumulate a lot of men’s grooming and skincare products. With the exception of a few anatomically exclusive items (beard oil, ball powder), this tends not to be a problem, because skin is skin and gender is a social construct. A variety of “men’s” products have found their way onto my face in recent months without sabotaging my girlish complexion, and no one is any the wiser unless they happen to be taking a particularly scrutinizing look at the the labels on the jars and bottles scattered across my dresser that I pretend amount to something resembling a “skincare routine.”

My use of at least one men’s product has, however, become increasingly obvious to any such gazer thanks to the fact that it literally has the masculine almost-pronoun “Hims” written on it, which one friend recently called attention to by asking, “Is that Hims like the erectile dysfunction brand?” The answer is yes! The telemedicine brand is also the Hims of lots of other things, including hair loss remedies and this night cream that I am currently obsessed with, which is what brings us here today.

Let’s start with the most important thing: it’s called Goodnight Wrinkle Cream, which is deliriously cute and could be a depressing sequel to Goodnight Moon. Every night I slather it on my face and think to myself, “Goodnight wrinkles,” which is definitely the closest I’ve come to having a healthy attitude towards aging.

Just kidding, that’s obviously not the most important part (and I will never have a healthy attitude towards aging). The most important part is that this thick, luxurious-feeling cream uses hyaluronic acid to help you and your wrinkles rest easy (and hopefully less noticeably). Because my approach to skincare can probably best be described as “haphazard,” I reached out to New York City-based cosmetic dermatologist Dr. Michele Green, M.D. to help explain what that means and why it matters for your face.

“Hyaluronic acid naturally occurs in the body, and as you age the body produces less of it,” Green tells InsideHook, adding that the substance “is also known as a moisture magnet due to its ability to hold one thousand times its weight in water, which is also what makes it an excellent ingredient in your moisturizer.” In a night cream, says Green, “it does wonders to quench dehydrated skin, restoring its PH balance and moisture level and leaving the skin dewy and rejuvenated.”

In general, adds Green, night creams address different concerns than daytime moisturizers, and provide “intense hydration and concentrated ingredients to fight signs of aging and other concerns.” Because night creams “work on a more cellular level to repair the skin as you sleep,” Green recommends them as a low-commitment anti-aging approach to add to your skincare routine.

Other non-scientific reasons I recommend this product? The scent. If there’s one complaint I have about using men’s skincare products as a woman, it’s that they tend to be relatively scentless because apparently men hate things that smell good. Not the case here! While neutral enough so as not to offend any sensitive male nostrils, the Goodnight Wrinkle Cream has a warm, cozy scent that sort of reminds me of oatmeal, but not in a sugary, Bath & Body Works oatmeal raisin cookie-scented hand soap way.

Frankly, it’s a scent and consistency that makes me feel kind of swaddled, which I guess is what you want from a night cream. But unlike an infant, I feel like I am the agent of my own swaddling — at once the swaddled and the swaddler. Using a night cream, a special lotion that I use at a different time of day from all the other stuff I haphazardly slap on my face, makes me feel like I know what I’m doing, like I have finally mastered the ill-defined yet inescapably buzz-wordy art of “self-care.”

While I often find the very idea of skincare daunting, the feeling of accomplishment in exchange for relatively little effort I get from the Goodnight Wrinkle Cream makes me much more willing to actually use the product. When I drag my drunk skin home at 3AM on a Saturday (or a Tuesday), the prospect of getting to use that cream is often the only thing that convinces me to actually wash my face and take out my contacts. Did I drink water or do literally anything else to keep myself alive? Probably not. But I drunkenly slathered some night cream on my face before passing out, which means my wrinkles get to rest easy knowing they are attached to a quasi-functional human being.