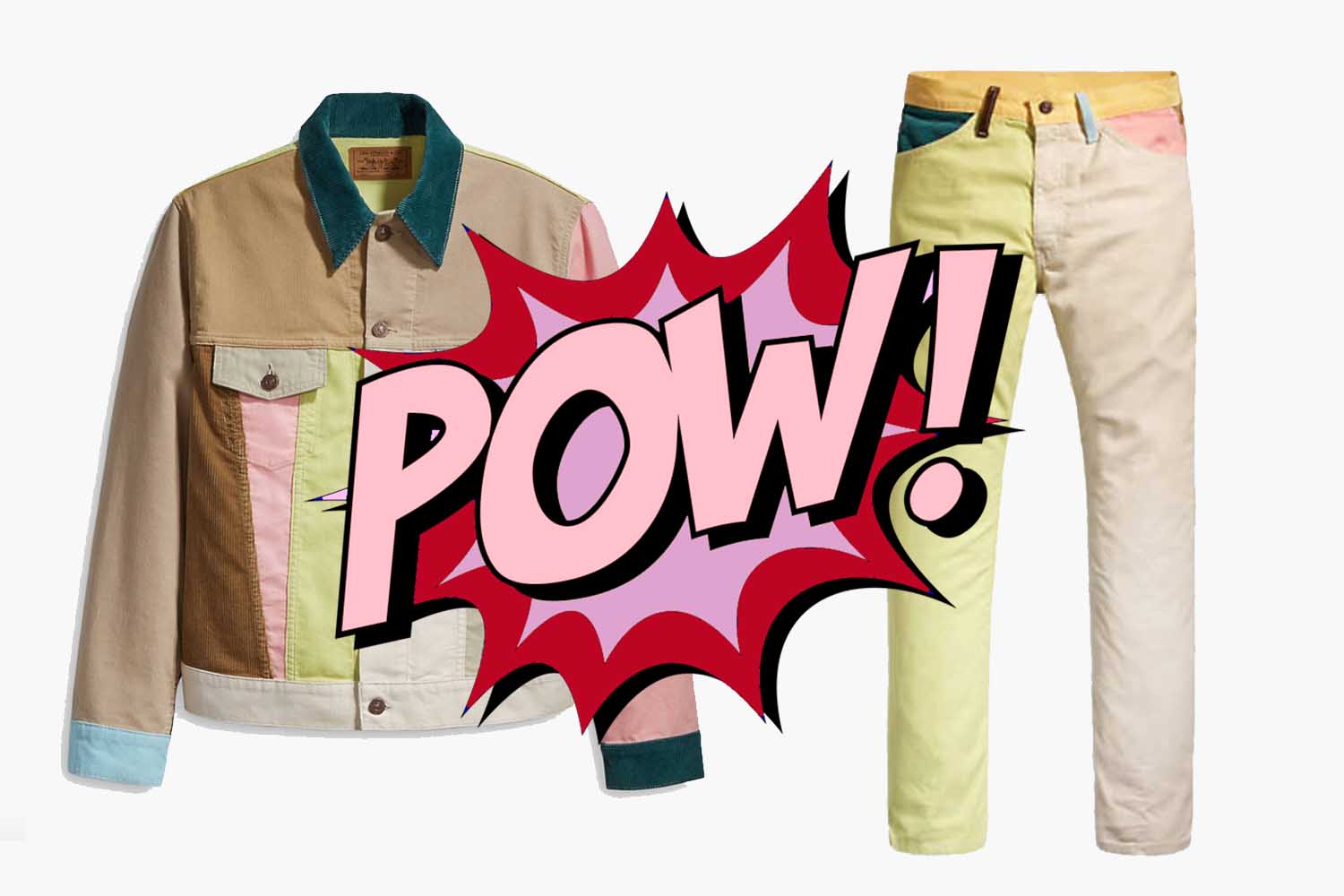 Each week, our inbox runneth over with news of gear, apparel and tech releases from around the world. In this feature, we’ll parse through the best of them. Today: Truly’s take on seltzer lemonade, Patagonia Stand Up bags and a colorful Levi’s collection.

The denim jacket has its merits, but warmth ain’t one of ’em. So American Giant took that classic silhouette and transformed it into a cozy fleece layer with four pockets, contrasting details (the stitching and the back of the collar) and a flexibility you won’t find in your typically stiff Levi’s layer. Yeah, it’s not gonna develop a fade or anything over time, but that little lack of character is a small price to pay for staying warm.

It’s been a stellar few months for the Jordan brand, and the train keeps rolling on with this new iteration of the AJ1, done up in a colorway that clearly takes inspiration from the original ’85 design. You get a black base, gym red overlays and a bright white midsole. New, but classic.

For Levi’s Vintage Clothing Spring/Summer 2020 collection, the brand sourced inspiration from San Francisco’s soapbox derby of 1975. If you’re unfamiliar with what a soapbox derby is, it’s essentially a race-car competition, but the cars are all makeshift (one occurs in the 1994 The Little Rascals, if that helps jog your memory). The particular derby Levi’s referenced for this collection was sponsored by the San Francisco Museum of Art to celebrate their transition to what they’re now known as, the San Francisco Museum of Modern Art. Various artists from the Bay Area were invited to create cars and participate, sponsored by Levi Strauss & Co. The resulting collection inspired by the event is anything if not emblematic of 1975 San Francisco, replete with pastel pinks, yellows and blues, wide-legged jeans and suede trucker jackets. Groovy.

Baseball is back, baby. New Era has just released Major League Baseball’s spring training hats for 2020. Many of the 39THIRTY stretch-fit hats feature a team logo within the letter logo, while teams like the White Sox and Blue James feature some unique designs. So good for them, we guess.

You know Patagonia’s legendary Stand Up Shorts, one of the first products Yvon Chouinard ever produced, named for the fact that the first pair stood straight up on a table. Now you can buy them in bag form. There are no frills in the utilitarian duffel, brief, tote and belt bags, but in true Patagonia fashion, they’re made from better materials than the other guys, like organic cotton canvas and 100% recycled lining.

The late Jake Burton fell in love with luggage brand Streamline’s designs and customized his own for Burton’s MINE77 collection. The upgrades include a bigger overall size, an all-black finish, swapping the traditional buckles for snowboard binding ratchets, adding skate wheels and an interior mountain scene print.

If the success of the Element 87 and its little brother, the Element 55, is any indication, the React Vision seems like it could be a significant drop for Nike, one we could very well start seeing in a whole lot of different colorways. It’s a real looker, with some interesting, nearly inside-out-looking overlay patterns, and a very cool swoosh printed directly onto the outer layer of mesh. Add in some 87-esque dots of color on the React foam midsole and a hard plastic heel-counter that juts out a bit (a nod to the Nike x Sacai waffle, perhaps), and you’ve got a classic in the making.

So, the thing about this turntable is that, yes, on first glance, it looks very cool. And you’ll sound really cool at your next dinner party when you can tell people that it’s inspired by the 1955 Braun PC 3 SV, which was designed by legendary German industrial wiz Dieter Rams. But also, we kinda hate how the base of the turntable is only big enough to comfortably hold a 7″ rather than a 12″ LP, ultimately making it look like some sort of bullshit Crosley thing. It’s got a built-in phono preamp, so it’s definitely made for beginners rather than audiophiles, as further evidenced by the very entry level Ortofon OM-10 cartridge. For the money, you can do better.

Truly sometimes gets the short end of the stick … even occasionally from us. But the seltzer giant recently dropped their version of spiked lemonade, and it’s pretty fucking good. The seltzer/lemonade mix has only 100 calories and comes in four tasty flavors: Original Lemonade, Black Cherry Lemonade, Mango Lemonade, and Strawberry Lemonade. Of course, it’s a little sweeter than your regular spiked seltzer, but if you’re craving a kick of flavor, definitely consider picking up a case.

Persol just debuted a collaboration with French fashion house A.P.C. featuring three new iterations of Persol’s famed 649 model. The 649 model’s conception is rooted in Italian history — originally designed for and worn by Italian tram drivers in 1957. It wasn’t long after that they achieved icon status when Italian actor Marcello Mastroianni wore them in the 1961 film Divorce, Italian Style. So if you’re looking to achieve that same status, consider copping one for yourself.

In honor of the approaching 2020 Olympics in Tokyo, Reigning Champ and Asics have teamed up for a four-part series of capsule collection, each one inspired by a global city. The latest installment in the series pays homage to Vancouver, and the inspiration is evident in the sneaker colorways: glacier grey (the Goretex GEL Cumulus 21) and midnight (the GEL-Quantum 360 5 Trail), a reflection of the city’s coastal shores and grey skies.