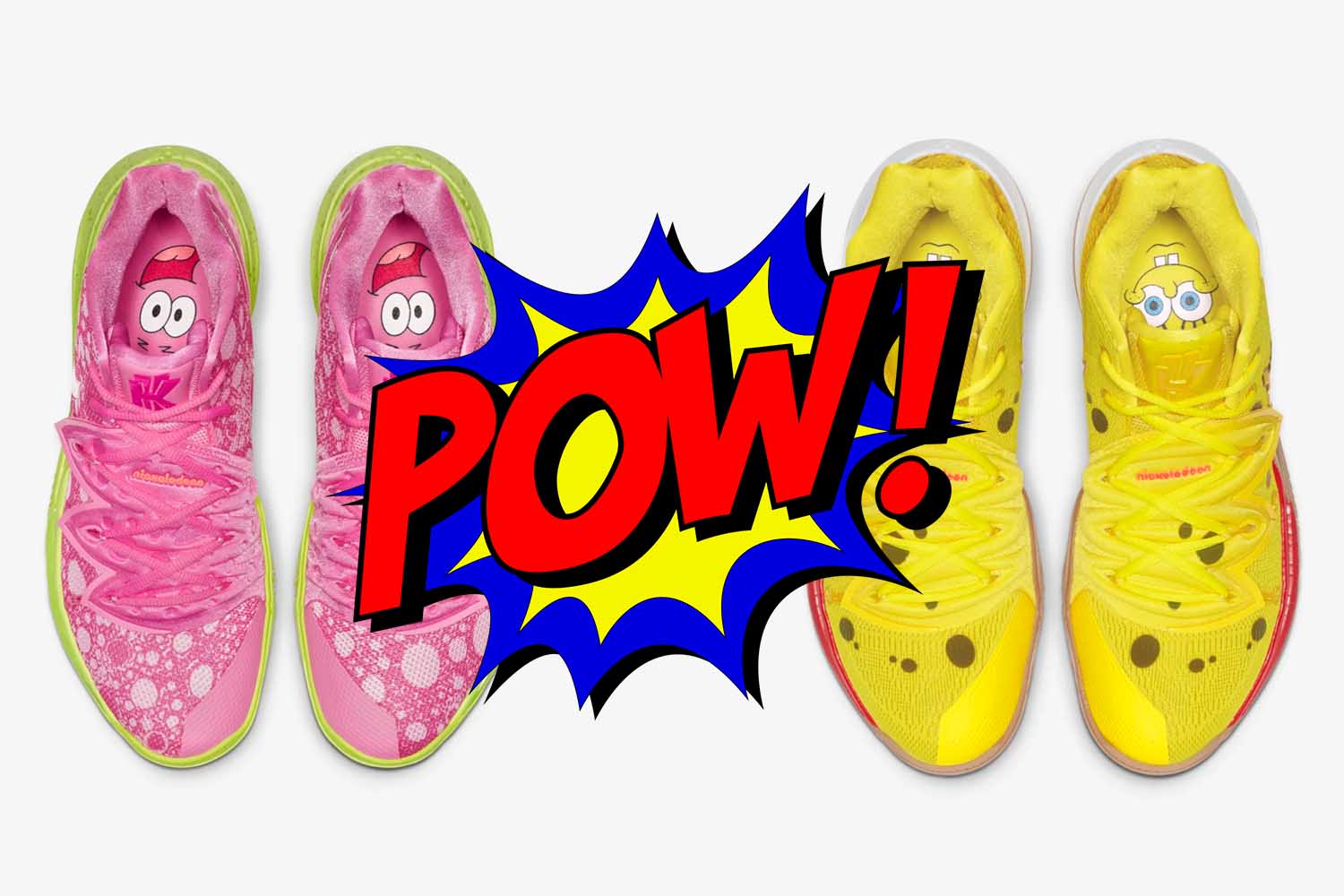 Kyrie Irving is bringing us Spongebob Nike sneakers for some reason.
By The Editors / July 20, 2019 5:34 am

Each week, our inbox runneth over with news of gear, apparel and tech releases from around the world. In this feature, we’ll parse through the best of them. Today: a collection of what Nike could have been, a dog crate that doubles as a side table, sunglasses with four lenses, and much more.

It’s not going to be summer forever, you know. Before too long, it’ll be glorious, glorious boot season. Consider shoring up your rotation with this new release from Red Wing, a Horween leather version of their classic moc-toe.

This signature collection from Jake Burton, the founder of Burton Snowboards, includes an array of oversized corduroy, french terry, and fleece tops, bottoms, and sweats that if you haven’t picked up a skate, surf, or snowboard, you might not be cool enough to wear.

That’s right, there are not two, not three, but four lenses on these babies. Designed to provide full protection from the sun at every angle, 4 Lenses also comes with a full color collection so you can figure out what colors match best with your third eye.

The iced tea brand and adidas are bringing us limited edition Yung 1 and Continental AriZona-inspired kicks and trips to the emergency room. The sneakers were originally being sold for only 99 cents exclusively at a NYC pop-up shop. But because this is insane, a riot broke out and the store was shut down by the NYPD before anyone could grab a pair and resell it for way more money.

Yes, menswear guru Todd Snyder’s latest release is a limited-edition Land Cruiser, made by The FJ Company. No, this isn’t just a vanity project — you can actually buy one of these bad boys (for a cool $185K).

In other surprising collaborations, Kyrie Irving, Nike, and Nickelodeon have teamed up to bring SpongeBob Squarepants out of the sea and onto your feet. The collection is said to celebrate Kyrie’s love for the television show, and we have to admit, these sneakers are pretty dope.

Your dog’s furniture should match your modern minimalist boho chic decor or whatever the hell you’ve got going on, and Fable Pets will help you do that. Their home collection features a bed, dog toy, bowl, cleaning wipes, and the highlight — this crate which also doubles as an end table. And you will 100% enjoy all of this way more than your pet.

JJ Watt is very strong. These are the shoes he uses in order to stay that way.

Musician Questlove imagined his ultimate pot-luck dinner, asking more than fifty chefs, entertainers, and musicians, such as Eric Ripert and Natalie Portman, to share their favorite recipes. He also pairs each guest with a song he thinks “best captures their unique creative energy.” So even if you don’t cook, you can find out how Questlove really feels about these people.

With this new capsule collection, Puma’s celebrating the 10-year anniversary of its relationship with with pro golfer Rickie Fowler. Suspiciously missing is any sign of his once-trademark orange, replaced here by a superbly golfy, grassy green.

The Shoe Dog Pack shows us what Nike could have been. Co-founder Phil Knight details in his memoir Shoe Dog, that three options for the company’s name were bounced around: Nike, Falcon and Dimension Six. So the pack includes old school renditions of each name in Nike’s first released running shoe, the Cortez.

We’re assuming these are for the person who is worried about the dangers of open-toed shoes, but still has a burning desire to show off their feet.

Snow peak has made a smoker for us who have very tiny backyards and like to smoke meat without complications. Just add wood chips, few hot coals to the bottom layer, and just stack all the things you wanna smoke.

Minnetonka is re-introducing this men’s style, first released in 1969, because Brad Pitt wears them in the upcoming Once Upon A Time In Hollywood. They’re available in two colors and going fast, but if they’re out of your size just give ’em your email to be notified when they’re back in stock next week.