The 17 Best Gear Gifts for the Outdoorsman (or Outdoorswoman)

Take them from spartan camping to luxury glamping 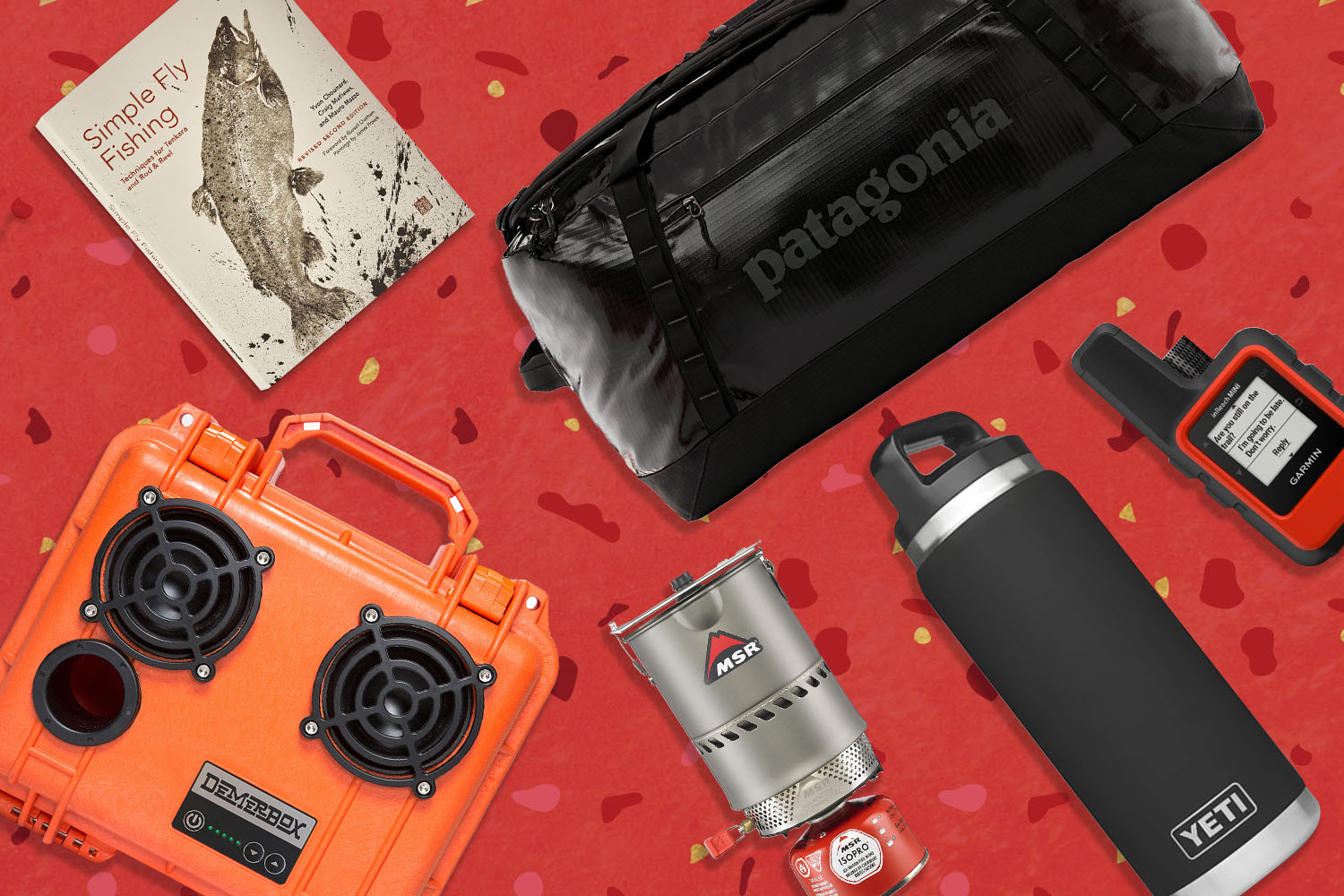 The sweet spot for any holiday gifting is in finding a present they want, but won’t buy for themselves — whether it’s too expensive, extravagant or eccentric (we could all use a little more eccentricity in our lives, after all). If your recipient is a camper, hiker, fisher, mountain biker, Alexander Supetramper or any of the other varieties of outdoor aficionado, you’re in luck, because for them it is easier than just about anyone else.

You see, outdoorsy people tend to be frugal, and aware of the fact that unfettered consumerism is actually ruining the planet they’re trying to explore. They’re in it for the trees and eagles and gurgling streams and all that. The gear they need to achieve that end is a necessity, not a luxury, which is why they’re still using that hand-me-down tent, Nalgene from college and that Swiss Army knife from before that.

So it’s up to you to inject a little glamping splendor into their spartan campsite. That’s not to say any of the 17 outdoor gifts we’ve rounded up below are unnecessary. Far from it. But whether it’s the stocking stuffer camp lights or a jacket that mimics the adaptive camouflage of the majestic squid, they might just start Instagramming their gear as much as the landscape.

In short, Hipcamp is Airbnb for campsites. Sure, we’d normally say gift cards should stay the purview of out-of-state aunts and uncles who get you mixed up with your siblings, but we’ll make an exception in this case. By gifting Hipcamp, you’re giving them access to over 300,000 spots they’d never have even considered before. We’re not just talking spots to pitch a tent — there are also yurts, stationary Airstreams and tiny cabins galore (we’ve got the pics from our own vacations to prove it).

If they’re already set in the gear department (and you’re afraid of getting them something they already have), then help inspire their next adventure. Rough Magic is one of the best books we read this year, and would have been even better next to a bonfire in the middle of nowhere. It’s Lara Prior-Palmer’s story of racing in the Mongol Derby, the world’s longest horse race, and becoming the youngest person to finish and the first woman to win.

A lantern is fine. A flashlight is OK. A smartphone light is amateur hour. These ENO lights? The stuff of Instagrammable magic, able to turn even the most austere of campsites into a hygge retreat.

Will a $10 water bottle do the job? Of course it will. But Yeti’s obsessively designed Rambler will keep water ice cold and hot drinks steaming for a ridiculously long time. To up the ante, include the MagDock cap (which features a magnetic cap that attaches to the lid) and the HotShot cap (ideal for drinking coffee).

You could hook them up with a pair of New Balance’s sweet new trail sneakers, but because footwear is tough to gift, pick up this sherpa crewneck and matching joggers from the same all-terrain collection. It’s a full-on polar bear fit, and we very much approve.

Give’r pitches its gloves as “built to withstand anything, from grabbing a burning log out of a fire to ice fishing in -25 degrees.” Go ahead and write that on the card when you gift these. But unlike the standard model, this is a Huckberry exclusive in a limited-edition chestnut leather.

Contrary to contemporary belief, a bandana isn’t an accessory, it’s a tool. Protect your face, wrap your hands, filter water, stow your freshly picked produce — the uses are limitless, especially with this oversized option designed in partnership with acclaimed Argentine chef and man-of-the-world Francis Mallmann, and hand-printed in Japan.

Signing someone up for a new activity is a tricky proposition, but fly fishing is experiencing a resurgence and this setup from Tenkara Rod Co. has everything they’ll need to get started.

This tome from Patagonia founder Yvon Chouinard and fly fishing experts Mauro Mazzo and Craig Mathews is a must-read for beginners and enthusiasts alike, and a good stocking stuffer alongside the package above.

Chances are they already know about these basically indestructible bags. But this year, Patagonia updated them with a 100% recycled body and lining, out-Patagonia-ing themselves.

They could lay on the cold hard ground and become one with nature. Or they could whip out the La-Z-Boy of camping chairs — made of aircraft-grade aluminum and non-absorbent monofilament mesh, and offering support for their back, neck and shoulders that have been lugging around gear all day.

Ask any outdoorsman, any real outdoorsman, about their favorite camp stove, and the name MSR will come up. Pick your size — 1.0L, 1.7L or 2.5L — and get that water boiled in under two minutes.

How do you make a virtually indestructible waterproof speaker? Make it out of a Pelican case, natch. Whether the forecast calls for rain or snow, they’re hunkered down on the mountaintop or desert valley, the DB2 will be supplying the tunes (or charging their devices).

Maybe you’re a concerned parent. Maybe they’re looking to taking their adventures to more remote locations. Either way, Garmin’s pipsqueak satellite communicator enables text messaging, location tracking, emergency services and more — no matter how far off the grid they go. (Make sure to sign up for a satellite subscription, too.)

$995 for an outer shell is quite a lot of money, we realize, but such is the going rate for a jacket that integrates color-shifting properties that mimic those of an actual squid. Indoors, it’ll appear black. But outdoors, on the slopes? It’ll reflect all the natural light being thrown at it and begin to resemble liquid metal. There’s some real Terminator 2 shit going on here, and we are into it.